A trip to Sardinia, where saffron -- of the most expensive plants in the world -- is carefully, carefully harvested. 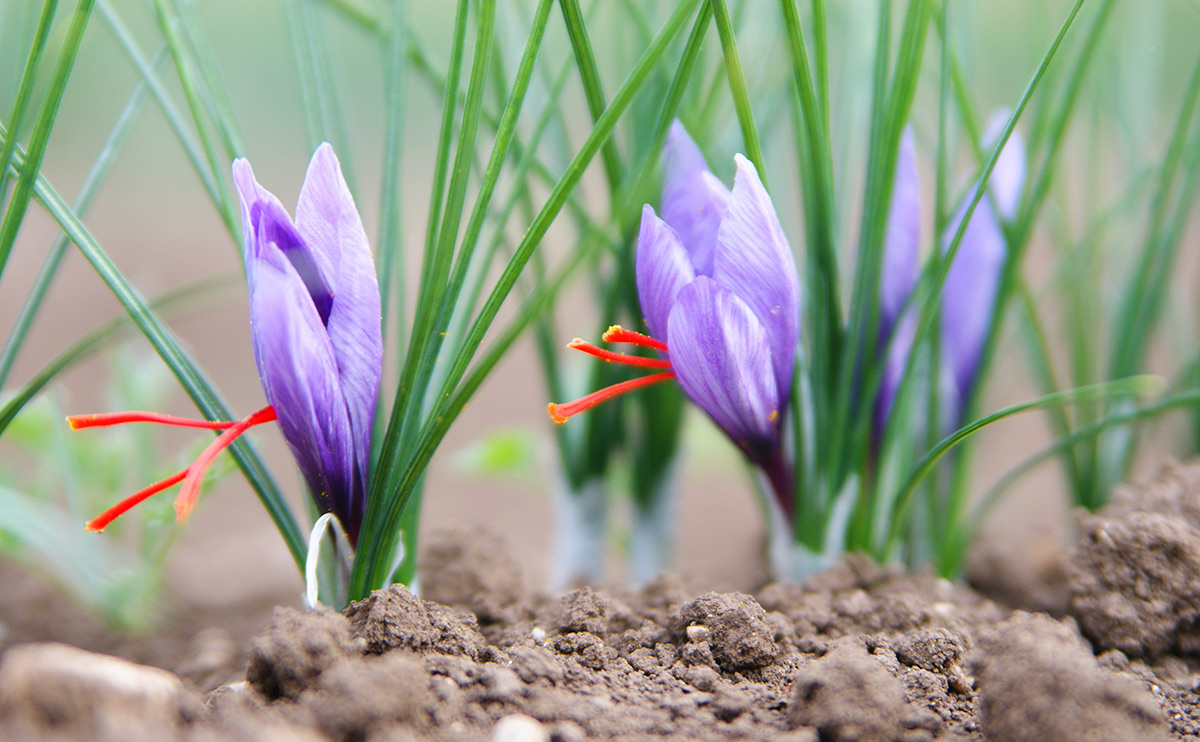 Saffron is the dried stigmas of the Crocus sativus flower. This fall-blooming crocus is native to the Middle East, and the Phoenicians are thought to have introduced the plant to Sardinia thousands of years ago. Saffron is produced throughout Italy, but most Italian saffron comes from three towns within a few miles of one another in the southern province of Medio Campidano: San Gavino Monreale, Turri, and Villanovafranca. Although Iran, Spain, and Greece produce saffron in greater quantities, Italian saffron ”“ particularly Sardinia’s ”“ is prized for its intense flavor and fragrance.

“Saffron is my best product,” says Caboni. It’s known as “red gold,” and for good reason: A gram of high-quality saffron retails for about $12, which adds up to nearly $5,500 per pound, making it one of the world’s costliest foodstuffs. Caboni sells it all over the world, from France to New Zealand. (You won’t, however, find it in the States yet ”“ Caboni says he has USDA approval but lacks the sponsorship he needs to sell it in the US.)

A gram of high-quality saffron retails for about $12, which adds up to nearly $5,500 per pound.

Most years, Caboni produces between 1 and 1.5 kilograms, or between 2.2 and 3.3 pounds of saffron. This year, however, he expects to produce very little of it. Weather has ravaged his fields, and he wonders if climate change will continue to undermine the island’s saffron production.

“The seasons are changing,” he says. “This year, we didn’t have a winter. We had autumn and spring for six months.” Showing a visitor around his farm in April, Caboni pointed forlornly at furrows that were overcome with weeds, in fields too muddy to work. Crocus buds were rotting in the ground.

Caboni, 42, was once a civil engineer. He has been farming since 2002, when he founded S’Argidda di Fausto Caboni on 40 hectares (just under 100 acres) in San Gavino Monreale that his great-great grandfather once farmed. Last year, his farm was certified as organic ”“ a distinction held by only one other Sardinian saffron producer. He is one of five who are certified by Denominazione di Origine Protetta (Protected Designation of Origin), which sets standards for agricultural products that boast Sardinian origin. S’Argidda also has the approval of Presidio Slow Food, which promotes sustainability and traditional quality among small-scale producers.

On Sardinia, crocus corms are planted in September and left in the ground for four years, with a regular mowing every May and September, along with a contour plowing to aerate the soil in autumn, Saffron production depletes the soil, so the crocus beds are rotated with the legumes, which nourish it.

The crocuses are harvested in November, when their purple blossoms carpet the region’s fields. During the harvest, which lasts for about three weeks, S’Argidda employs 10 people to pick the blossoms by hand every morning. They collect the flowers in round baskets called ‘trugs,’ which have small mouths that prevent the blossoms from blowing away in the wind.

Saffron production depletes the soil, so the crocus beds are rotated with the legumes, which nourish it.

The trugs are emptied into the center of a long table. In the evening, says Caboni, he and some two dozen workers sit around the table and “clean” the morning’s harvest by removing each flower’s three dark red stigmas. The dried stigmas from 140 flowers add up to one gram of saffron threads.

As a final step before drying, says Caboni, they dip their fingers in olive oil and rub it lightly into the saffron threads. This procedure, known as sa feidadura (“soft moistening”) in the island’s Sardo language, brightens the stigmas and helps to preserve them, he explains. Caboni carries out this step — even though Denominazione di Origine Protetta doesn’t require it ”“ because “it it is traditional to Sardinia.” Carrying on the island’s traditions and upholding its reputation for high-quality farm products are all the reason Caboni needs.