Rabbits: From Farm To Fashion 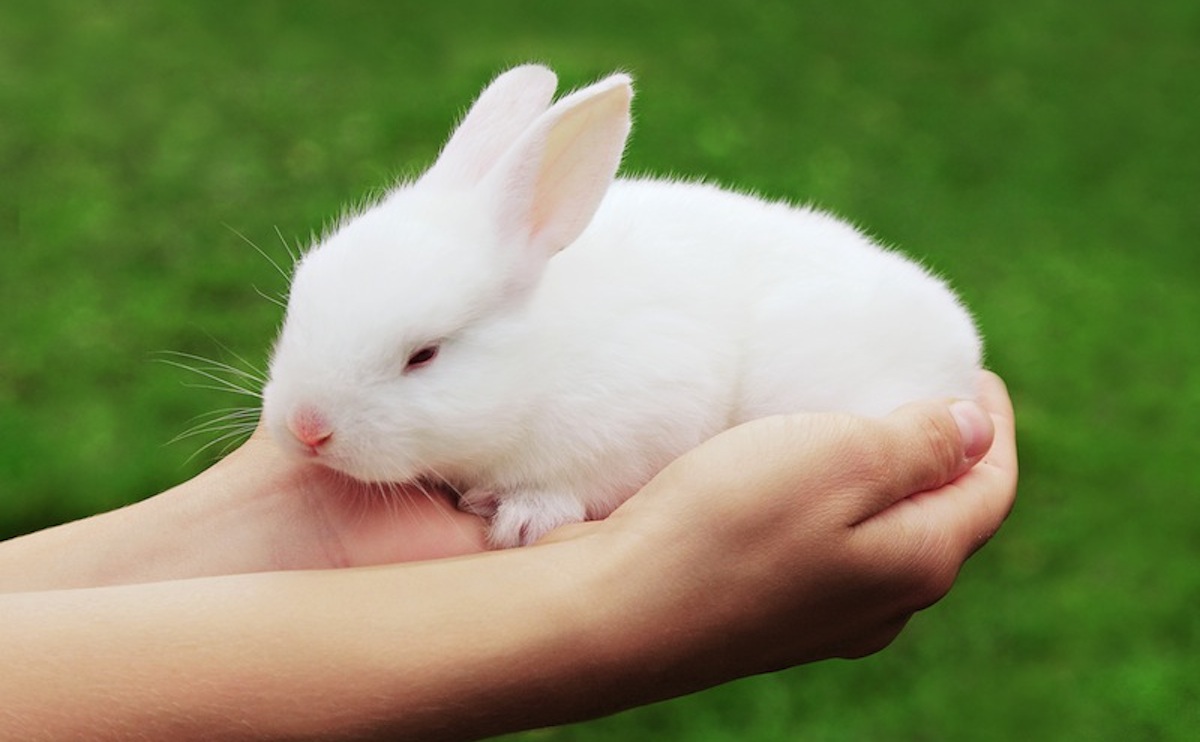 Then there are the magazine spreads: Anna Kendrick petting a rabbit in Elle, Sophie Kennedy Clark hugging a rabbit in Vanity Fair, James Franco cuddling a baby bun on the cover of Numéro. Needless to say, fashion rabbits lead far different lives from their farm counterparts, but we were curious to see how far back those differences go. So, we talked to two rabbit breeders – one who raises meat rabbits, the other who breeds fashion-worthy pets – about how their work is done.

“All of our bunnies are housed inside in our family playroom and are all our pets. Most of our cages were built to fit the room with a comfortable wire bottom, pull out drawer, and shelf. All of our bunnies are 80 to 100 percent litter trained. Every cage has a litter pan with a wire top, and their litter boxes are changed about every other day. Cage bottoms are changed once or twice a week, depending on the rabbit, and they take turns exercising in the playroom.

We feed them Purina Show pellets and Timothy Hay. Fresh fruits and veggies are given daily and in moderation, while probiotics are given about once a week to promote healthy gut function; we feed papaya to long haired or molting rabbits. When mothers are expecting they are given a nest box with hay about a week before, so they can begin nesting. We keep a close eye on them on their due date to make sure they had the babies in the nest box; if they are born on the wire, they will freeze. We check to remove any stillborns and see if everyone looks healthy.

When raising dwarf breeds, it is common to have peanuts, hippos, and max factor babies. This is when the baby inherits a dwarf gene from each parent; there are different deformities they can be born with, and they do not make it. Other babies develop fine for weeks and then all of the sudden shut down. We call these faders, and it is also due to this gene. So, because dwarf bunnies usually have small litters and not all of them make it, it does take a lot of patience to breed them. It’s a labor of love and does not happen quickly or easily.

When you do get to raise healthy babies, it is the most rewarding experience! My children and I play with the babies every day, and by the time they are ready to leave, they are truly used to a family environment and being handled. Some we keep if we feel that they will better the breeding program. Our does are bred every three months, and they start to expect and need this routine. We do focus on the blue-eyed whites and have also started to work with oranges in Netherland Dwarfs. We have some solid colors in our rabbitry, too, that do not carry the blue-eyed white gene, and this is to improve type. We are striving to reach the ARBA standard of perfection in all breeds.”

“I have a buck and three does, which is more than enough for backyard rabbit husbandry. I sell a certain number of rabbits to cover the cost of feed, so what I get out of the deal is free. You need a decent build cage, and you need somewhere to utilize their droppings, because they’re directly fillable. You don’t have to compost them like chicken manure; you can spread them in the garden the way they are. So that’s a symbiotic relationship. If you have a garden and grow a lot of greens, you end up with a certain amount you don’t want to eat. You can feed the spare scraps to the rabbits, and then take their droppings and put them in the garden.

If you feed them pellets, you use compressed alfalfa pellets. Timothy hay and alfalfa is their food source, along with whatever else you augment from the garden, like roots and lettuces. For a watering system, you can either give them water with bottles, or fill up an autofill tank on top of their hutch. You usually breed them on a four-month cycle, but you can do it more intensively. If you breed them every four months, you’re going to get three litters a year. Each litter will be between eight and fourteen rabbits, but you’re going to lose some of them.

If you raise rabbits for meat, you’re looking for something very different than pet rabbits – not to say meat rabbit breeds couldn’t be good pets. Californians and New Zealands are the most common breeds for meat rabbits. They’re big, fluffy, usually white and black rabbits. I raise red New Zealands, which don’t grow as fast, but they’re more hardy. Meat rabbits aren’t like wild rabbits. They’re not incredibly intelligent like jackrabbits; they’re not that bright. Generally, people who raise meat rabbits are not as focused on spending a lot of time with the animal. You slaughter them at about five pounds live weight, so you’re looking at three to four months. It’s a pretty quick turnaround.

For meat rabbits, you want something that grows quickly, has a small bone structure, and a large amount of meat on that bone structure. Any old meat rabbits costs about $12; pure bred rabbits are about $60. They live to be about 10 or 12, but people generally don’t breed them that long because it’s too stressful on them. I’ve never kept one longer than four years, and I’ve been doing this for nine years now.

I think people that raise meat rabbits on any larger level than me probably spend very little time with the animals. I spend a relatively large amount of time with them because it’s a hobby and I’m not doing it for money. I let them all out of their cage in a confined space, where they can run around and chase each other and have fun. We let them out once a day for at least a couple hours.

It’s a pretty easy hobby, as far as the city goes. Rabbits are quiet, they take up very little space; they’re kind of the perfect urban farm animal. I grew up on a farm, and tending rabbits was one of my jobs as a child. When I moved to Brooklyn, I had access to a rooftop, and it was something to pass the time and keep me connected to my food. My landlord let me get away with it – for one rabbit a month.”

I raise meat rabbits in Lafayette, Indiana. Thanks for the informative article.