Inside the World Championships of Cow Chip Tossing 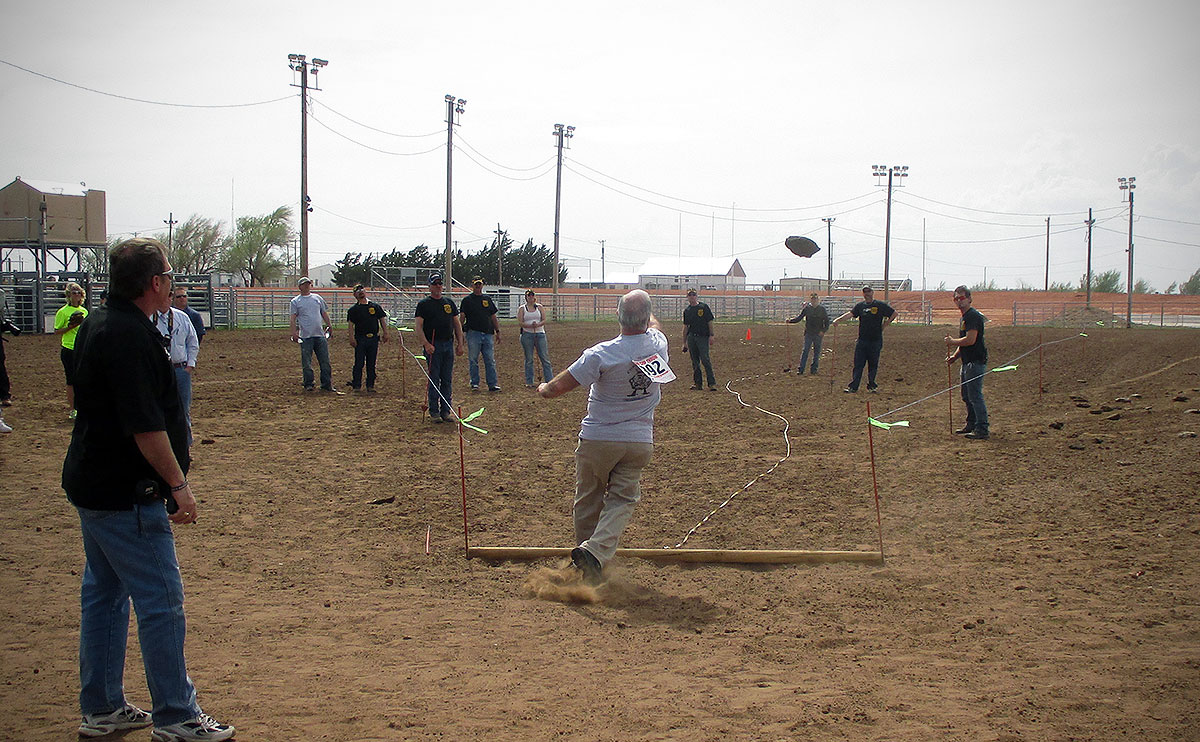 And they’ll tell you, if it’s your first time, that licking your fingers between throws (you get two chances) will give you good luck and a better grip.

I was invited to try my hand at throwing cow chips at the 45th annual Cow Chip Throwing Contest as a “VIP thrower,” alongside a couple of politicians, a handful of radio personalities, and an entire team of flight medics out of Liberal, Kansas.

Novice throwers generally went with the ‘bigger is better rule,’ selecting the largest chips they could find. Veterans, though, looked for ones smaller in diameter but with some heft to them and as perfectly round as possible.

We crowded, along with about 100 other participants (in addition to the VIP division, there are categories for men, women, and teams), around a red wagon piled high with dried patties of cow manure – which didn’t smell as bad as you might expect – of various shapes, sizes, and weight, searching for what we hoped would be the winning chip.

Official Cow Chip Throw rules stipulate that the chips must be more than six inches in diameter. Novice throwers generally went with the “bigger is better rule,” selecting the largest chips they could find. Veterans, though, looked for ones smaller in diameter but with some heft to them and as perfectly round as possible. They know that larger, drier chips will break apart mid-air, and they shake them with one hand to test their durability before picking, a move the rest of us mimicked. The veteran throwers were also better about keeping their mouths closed as the wind whipped through the crowd and debris flecked from the chips and went flying.

The World Championship Cow Chip Throwing Contest happens annually on the third Saturday in April, with a week of events – a tractor pull, a talent show, a golf tournament, a 5K, several concerts, a hobby and craft show, and a parade – leading up to the main event.

Beaver is cow chip country, part of the Oklahoma Panhandle, a veritable No Man’s Land, attractive only to the lawless and a handful of hardy pioneers when it was first settled in 1879.

Folks in Beaver, where cows outnumber humans 16-to-1, have been throwing cow chips at the annual Cimarron Territory Celebration since 1970. The idea for the cow chip throw was born in a Chamber of Commerce meeting. The Cimarron Territory Festival had been an annual event since 1937, but the Chamber members thought Beaver needed a gimmick to attract more visitors – and more commerce. Other Oklahoma towns had been successful with festivals centered around rattlesnakes (Okeene), roosters (Broken Arrow), and sand bass (Madill), all of which related in some way to their towns’ history and ecology.

So the chamber looked backward – to territorial days, when, legend has it, pioneer settlers burned dried buffalo chips, abundant in the area, for fuel. There weren’t many trees on those vast, open plains, but the wild buffalo were plentiful, and so families spent most of fall gathering the chips and all winter burning them for heat. The dried buffalo chips burned intense and practically odorless, producing little smoke and almost no ash.

Panhandle pioneers even made a game of gathering the chips, seeing how far they could toss them into a wagon – a true story, “as far as we know,” says current Beaver Chamber of Commerce President Abby Cash – which was what made the Chamber think a cow chip throw would be a perfectly unique way of celebrating their county’s history.

Who actually came up with the idea is up for debate. Brent Lansden, co-publisher of the Beaver Herald-Democrat, says his grandfather, Willis Lansden, who published the newspaper back then, first suggested the idea, and archived newspaper articles tend to agree.

But Dick Trippet, president of the Chamber during the first throw and present at the meeting when the idea was hatched, says it was Jim Lyle, a local banker, who launched the cow chip contest idea. According to Trippet, Lyle showed up to the meeting “a little inebriated” – “he’s no longer around so I can talk about him,” Trippet laughs – and suggested, while slurring, “We could throw cow chips.”

Trippet said Lansden ran with the idea, registering the trademark “World Championship Cow Chip Throw,” requiring other towns wanting to host an “official” regional throw to certify their events with the Beaver Chamber of Commerce. (Towns in Wisconsin, South Dakota, and Illinois host their own throws.)

The event quickly earned national and international notoriety; newspaper and television reporters from all over the country traveled to the small town to find out why folks in Beaver were getting their kicks from throwing cow crap. One of the festival’s founders, Ralph Rector, got invited to be on the Johnny Carson show; another, Kirk Fisher, made an appearance on a game show hosted by Bill Cosby and got the chance to talk up the festival.

These days, Beaver is more an oil-and-gas town than it is a cow town, and a four-year drought has made it hard on remaining ranchers. Still, the tradition endures, and every year, some 2,000 locals and out-of-towners gather to celebrate their heritage and take a chance at becoming cow-chip champion.

In high school we flipped coin and selected sides usually. 3 folk on each side. We would
throw cow poop ? at each other sorta like playing — hide- and see The losers were
out when hit anywhere with cow poop.
Huh we be cowboys shit slingers outta
Chattanooga Tennessee Giddyup
Jimemc

Popular
7 Smokable Plants You Can Grow That Aren’t MarijuanaBrian Barth
New Solar Panels Allow Farmers to See the LightNaoki Nitta
6 Differences Between Llamas and AlpacasAndrew Amelinckx
Goat Sex: Everything You Wanted to Know But Were Afraid to AskAndrew Amelinckx
5 Differences Between Hens and RoostersShelby Vittek
Explore Modern Farmer
Related
Environment, Labor, Water
California Farms and Farmworkers Attempt to Recover From Record FloodsNaoki Nitta
Books, How-To, Lifestyle
How to Turn Your Garden Into a Business, No Matter the SizeEmily Baron Cadloff
Food Security, Labor, news
A New Egg Co-operative Has Hatched in the Western U.S.Lindsay Campbell
Food Waste, Plants, Technology
New Solar Panels Allow Farmers to See the LightNaoki Nitta
wpDiscuz
We use cookies on our website to give you the most relevant experience by remembering your preferences and repeat visits. By clicking “Accept”, you consent to the use of ALL the cookies.
Cookie settings ACCEPT
Privacy & Cookies Policy