The Dogs That Sniff Out Land Mines

Mine detection dogs require a singleminded focus and attention to detail that is unparalleled. We talk to a man who train them. 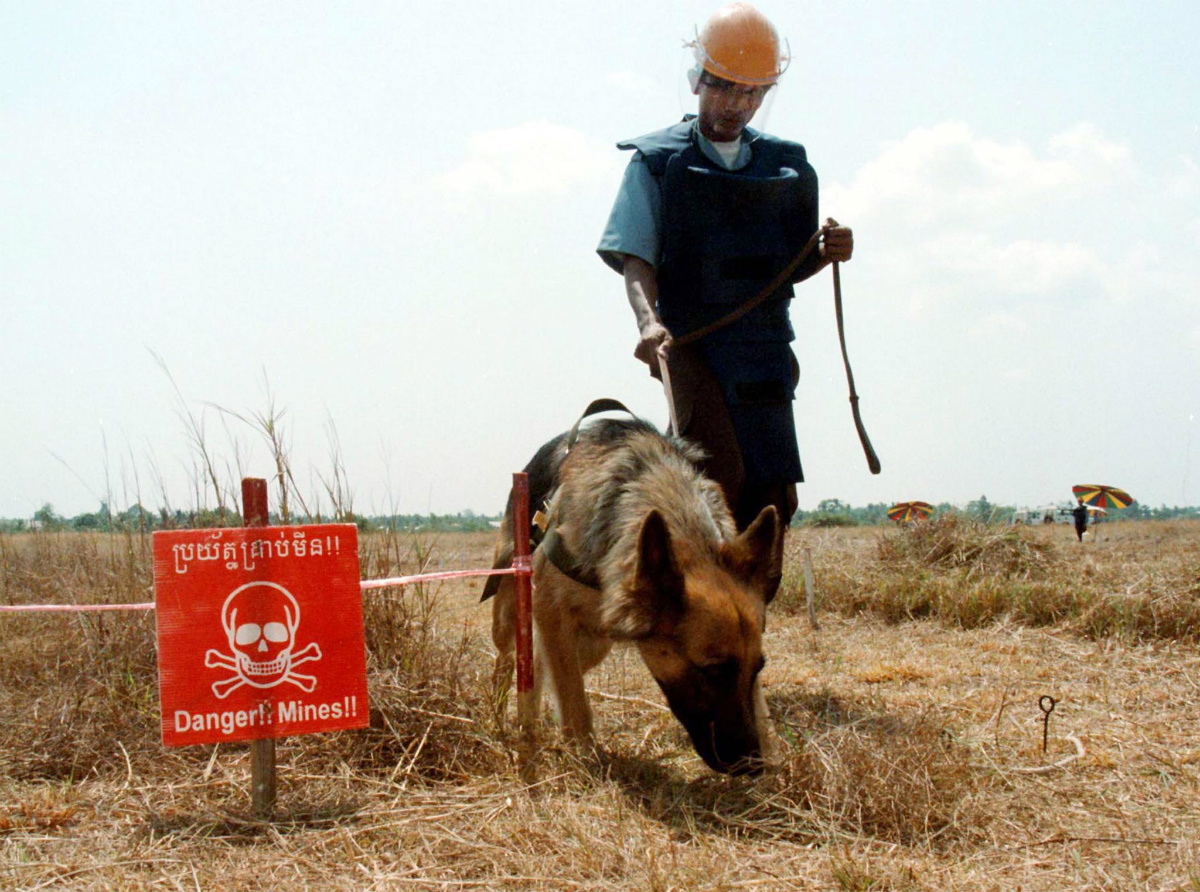 According to the Marshall Legacy Institute, mine detection dogs (known as MDDs to those in the business) have helped secure 14 million square meters of land, just in the last two years. Nine hundred of these intrepid pooches are spread throughout 24 countries; the human lives they’ve saved are countless.

Among paramilitary and police dogs, MDDs are the elite, the Seal Team Six of the canine circuit. They require a singleminded focus and attention to detail that is unparalleled, according to Dan Hayter, co-owner of K9 Global Training Academy in Somerset, Texas. Modern Farmer caught up with Hayter to find out more about what sets these pooches apart.

Modern Farmer: When did you start training dogs?

Dan Hayter: I was in the military for 22 years; 12 of those years was spent as a dog trainer. When I left the service in August of ’85, I realized there were barely any private companies providing this kind of training.

MF: When you started the training school, who were your first clients?

DH: We were a contractor for the State Department. The U.S. had a food program in Afghanistan while that country was at war with Russia. We were delivering food by pack mule; it was very dangerous. My company would train the handlers — local Afghans who’d bring dogs in to clear the roads.

The ones that don’t work out – usually 20 to 30 percent – will sometimes get trained for narcotics, or sent back to Europe.

MF: Are these the same type of dogs that sniff for bombs at airports?

DH: Actually, no. Their duties are very distinct. Explosive dogs search vehicles, buildings, luggage; the search patterns are more enjoyable for the dog and for the handler. Sniffing for mines is incredibly monotonous, repetitive work — it takes a special breed.

MF: Speaking of breeds, do you use German shepherds?

DH: No, we train Belgian Malinois shepherds. They’ve got a redder coat than German shepherds, and they’re very hearty animals. Afghanistan can go from freezing to 110 degrees. They don’t mind it — they’ve got a high energy drive to work.

MF: Where do you get the dogs you train?

DH: We bring them over from Europe at about one year old. We’ve got a few breeders we work with in Holland, Belgium and Czechoslovakia, very reliable. Not every dog works out, though. We have to be very selective, to see which ones really enjoy a repetitive task. The ones that don’t work out — usually 20 to 30 percent — will sometimes get trained for narcotics, or sent back to Europe.

DH: A narcotic dog needs to be very social — they’re going to be working around a lot of people. Dogs that do general police work, you’re going to need some intensity, kind of a protective nature. There are incidents when aggression is called for. For our dogs, this doesn’t matter as much.

MF: There are very high-tech devices that can detect mines. Why use a dog?

DH: A dog is more effective, especially when there is heavy metal content in the soil. Dogs can sniff out plastic or metal explosives. Also, this work is more dangerous for a human with a probe than it is for a dog.

DH: A dog is lighter, and less likely to set off a mine. We only see about a 3 or 4 percent fatality rate among mine dogs. I don’t have the exact statistics but I know the rate is higher for humans in this line of work.

A dog is lighter, and less likely to set off a mine.

MF: I imagine you grow attached to the dogs. Any loss must be hard.

DH: Oh yes. I mean, I’m just the trainer. It’s much harder on the handlers. These dogs are their family. They live, eat and sleep with them. Some of these guys will never work with dogs again after they lose one.

MF: Is the work hard on the dogs themselves?

DH: It can be. We definitely see some come back with PTSD. We work really hard to find good homes for the dogs that are really damaged.

MF: You train dogs as well as their handlers. Which is easier?

DH: Dogs, definitely. You watch people in school, you’ve got a wide range of students. Some will be easily distracted, looking out the window, goofing off. Dogs are a lot more consistent.

MF: Last question. Do you have any pet dogs yourself?

DH: I live on the training facility. All these dogs are my pets.

We are looking for 30 mine detection dogs for our clients. The dog should be NMAA and IMAS standard.

Dogs are definitely easier to train. People much harder!

It’s a shame we live in a world where we need these types of dogs to find mines. Someone should write an article about all the lives saved by these wonderful soldiers!

Adorable Teacup and Toy AKC Yorkie Puppies
We have adorable Yorkshire Terrier puppies male and female (she is pictured with the bow).The little girl was born on and the male was born on.

Psittacus erithacus, often known as the Congo grey parrot or African grey parrot, is an Old World parrot belonging to the Psittacidae family.