What the Dog Nose Knows 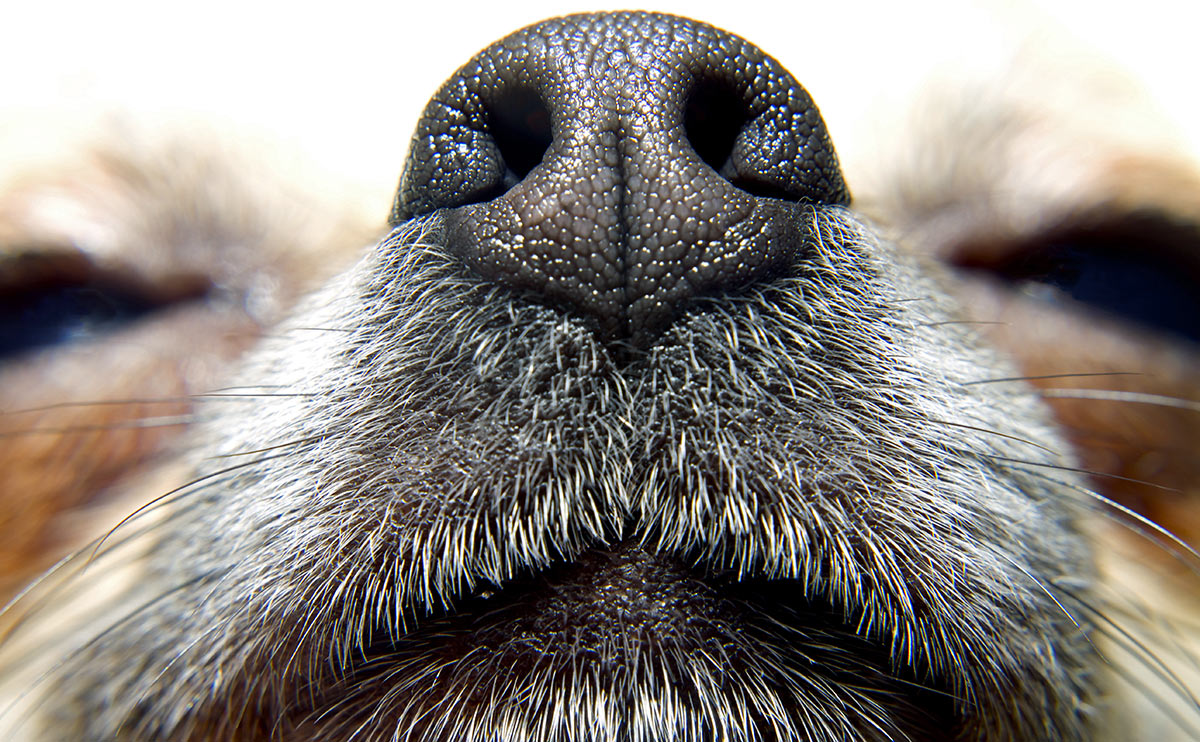 I wasn’t alone in that. Most humans don’t think that much about smell. It is an amorphous, sidelined sense — one that can jump out in extreme situations (frying garlic, mowing a fresh summer lawn, changing a baby’s diaper) but is generally tossed aside in favor of sight and sound and touch. In the world of mammals, however, humans are the odd ones out. Most other warm-blooded creatures experience the world acutely through our forgotten sense.

Dogs smell differently than humans – both quantitatively and qualitatively.

The gulf between people and dogs is of kind, not degree. “The difference between a human nose and a dog’s nose is the difference between a child’s chemistry set and a big chemistry lab in a large university or corporation,” says Gary Settles, a professor of Mechanical and Nuclear Engineering at Penn State University, who has done extensive research on the canine nose.

Why is this? Anatomy plays a big part. Humans inhale and exhale through the nostrils, each breath bringing a waft of odor molecules toward the top of the nose. There, olfactory receptors receive these odor bursts, each receptor receiving different individual molecules and sending signals to the brain. The brain then interprets these signals, turning the delicate choreography into an aroma, one that we can assign labels to ”“ words and emotions and memories.

But dogs smell differently than humans ”“ both quantitatively and qualitatively.

It begins with the sniff. Where humans take long inhales and exhales through one pathway, dogs inhale and exhale about five times per second and have separate olfactory and respiratory routes in their noses. The front part of a dog’s nose, says Settles, is almost entirely devoted to respiration (and heat exchange) while the rest is devoted to olfaction. Dogs are also one of the few animals that have muscles in their nostrils, allowing independent movement. On each sniff, a dog’s nostril flares. “When it’s open, it sends air back to the olfactory region,” says Settles. “When it’s closed, it’s blowing air out of the nostrils, stirring things up. Part of the reason dogs sniff is to stick its nose into things and stir things up and smell the scents that are available.”

And then there are the olfactory receptors. “There are hundreds of millions more olfactory receptors in a dog’s nose than in a human nose,” says Alexandra Horowitz, a dog cognition researcher at Barnard and author of “Inside of a Dog.” “We humans don’t have bad noses. We have a pretty decent sense of smell. But the dog’s sense is exponentially improved by having more receptor sites.”

A dog definitely experiences smells, odors – volatile molecules – that we don’t,” says Horowitz. “And threshold for smelling is much lower.”

The hundreds of millions more receptors in a dog’s nose doesn’t mean that the dog can smell hundreds of millions more smells. How, exactly, anyone (from humans to dogs) recognizes a particular scent is controversial in the scientific world. What we do know is that each of the many odor molecules that make up different scents is picked up by different olfactory receptors in the nose ”“ whether this is by a shape-based “lock-and-key” method or by vibration or by something completely different remains to be seen ”“ but no matter what, each olfactory receptor sends a signal to the brain, a signal that is combined with all the other signals, and translated into the conscious realization of a scent.

Because dogs have so many more receptors, they are able to smell more than humans. But more importantly, they are able to detect a scent in much smaller quantities. “This means two things: A dog definitely experiences smells, odors — volatile molecules — that we don’t,” says Horowitz. “And threshold for smelling is much lower.”

This is important when it comes to training dogs to detect smells humans are not capable of processing. The scent of cancer, for example. George Preti, a member at the Monell Center in Philadelphia, which works to further the science of taste and smell, teamed up with the Penn Vet Working Dog Center to work on ovarian cancer detection. For their initial study, they trained three dogs to detect the scent of ovarian cancer from biopsy samples, and over the course of the trial found that the dogs had a greater than 90 percent accuracy in determining a cancer sample from a control sample based on scent alone. Using that information, Preti was then able to determine which volatile odor compounds emanating from blood samples could imply the presence of the cancer. The goal, he says, is to create a device that can pick up on these odor compounds without canine help. But for now, “without the dogs telling us, we don’t know if we’re seeing anything, or if what we’re seeing is real.”

“I’ve smelled almost all the samples,” he adds. “I couldn’t determine healthy people from cancer. I’m working with the blood samples. I’ve literally sniffed each one. I sniffed each one in close sequence. I could not distinguish a thing.”

Finally, dogs have a far larger amount of the brain devoted to olfaction than humans do. This, says Horowitz, is important for the qualitative differences between humans and dogs. For humans, smell is an ancillary function. Vision, instead, is primary. “We have judgments about smells,” she says. “But dogs are not like that in any way. They are just viewing smells as information. Just as we open our eyes and see the world around us as informative ”“ not making judgments.”

But it’s possible to be a bit more dog-like in our own smelling. It comes down to a simple difference: Lead with your nose.

Horowitz likes to point out that for dogs, smell is a way to sense the passing of time. Take the scent of a person. If a dog enters a room and the scent of a particular person is strong, it’s likely that that person is there, or just left. With time, the scent dissipates, and a dog can pick up on that. “Dogs can tell time by the concentration of the odor,” Horowitz says.

Humans will never have the university-chemistry-lab of a nose that a dog possesses. But it’s possible to be a bit more dog-like in our own smelling. It comes down to a simple difference, Horowitz says: Lead with your nose. “We don’t smell that much not just because it’s not that strong but we don’t put our nose in those situations. We would be better smellers if we just stuck our nose up to the ground, or to a dog. We have an aversion to that.”

It’s been nine years since I lost my sense of smell. But I was lucky. The olfactory neurons are some of the only in the human body capable of regeneration and regrowth and my sense of smell returned, slowly, over the course of years. Today I would not hesitate for a second before sticking my nose to the ground and taking a deep, deep breath.