These monstrous black dogs with glowing red eyes have spooked and intrigued people for centuries. 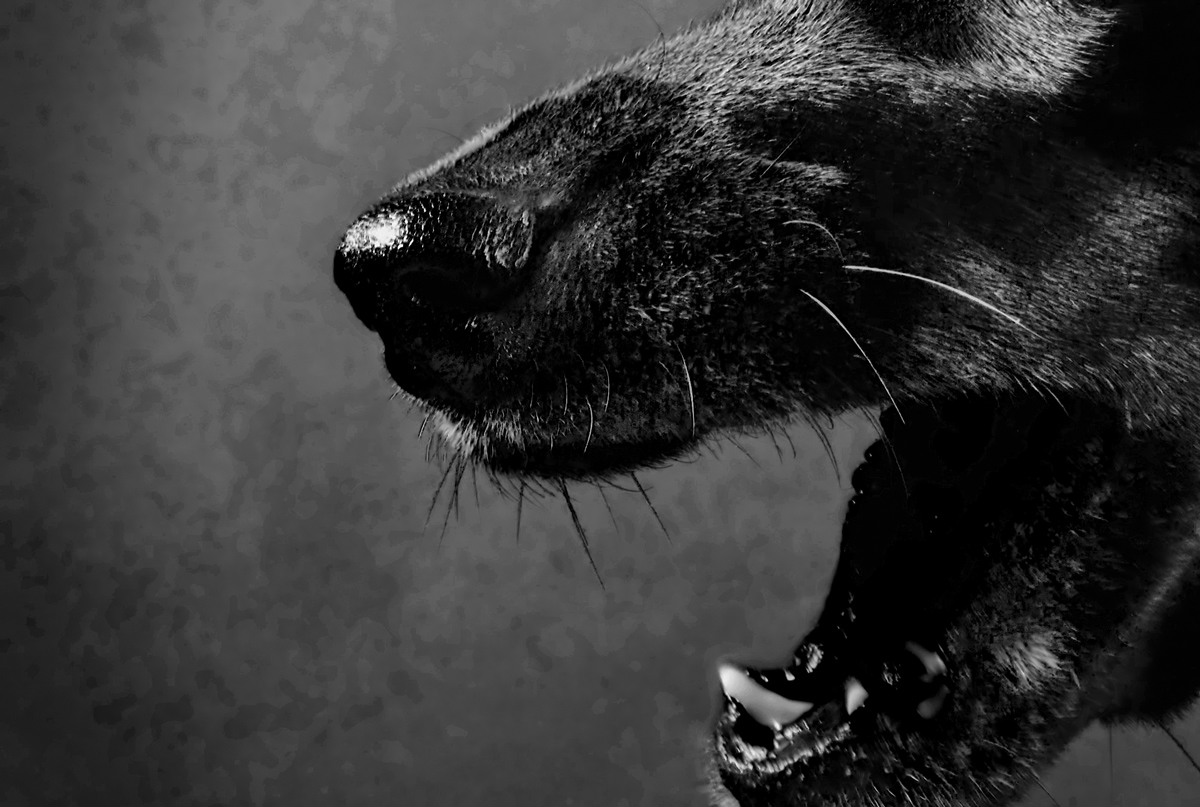 Moments after the church was fried, a massive black dog burst through the doors, careening through the aisles. Two men knelt in prayer. The monster shot past them, and as he did he “wrung the necks of them bothe” and they fell over dead where they prayed. As quickly as he appeared, the dog vanished, leaving nothing but scorch marks on the floor and two corpses in his wake.

So recorded Reverend Abraham Fleming in “A Straunge and Terrible Wunder,” an account of the bizarre happenings in the rural market town. It is one of many misdeeds attributed to a dog called “Black Shuck” and his legend has not waned. A black dog racing across a lightening bolt adorns Bungay’s coat of arms. In a 2003 song named for the beast, the English rock band The Darkness sang, accurately and succinctly, “Black Shuck / Black Shuck / That dog don’t give a fuck.” 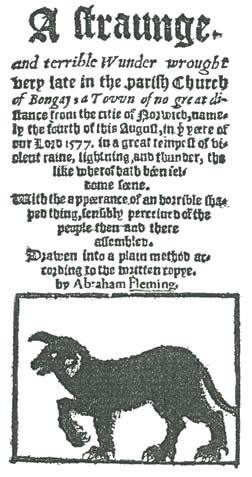 Reverend Abraham Fleming recorded a famous 1577 account of a Black Shuck sighting in “A Straunge and Terrible Wunder”.

Tales of monstrous black dogs, often with glowing red eyes, abound worldwide, but especially in England. Black Shuck is a popular one, but many regions have their own versions. They’re called The Gurt Dog, Padfoot, Barguest, The Hairy Hound, The Yeth Hound and the Grim, among other names. In the Isle of Man they’re called a Moddey Dhoo and in Scotland a CÁ¹ SÁ¬th. Black dog legends inspired Sir Arthur Conan Doyle’s “The Hound of the Baskervilles” and a Grim makes an appearance in “Harry Potter and the Prisoner of Azkaban.” A cursory search will reveal numerous Black Dog Pubs, Black Dog Restaurants and Black Dog Inns scattered across England.

Mark Norman has been researching black dogs for fifteen years. He grew up in Devon, an English county known for its coastlines and rural inland that is rife with legends and myths. But he didn’t develop a special affinity for black dog stories until he arrived at the University of Exeter, where he works for the student guild. There he discovered the archives of respected English folklorist Theo Brown, including seven whole boxes of black dog lore. Norman was hooked. He is currently working on a book about black dogs using Brown’s material, as well as collecting stories on his own.

A black dog’s motivation changes along with cultural perceptions of canines; in cultures where dogs are considered unclean they tend to be more nefarious.

Tales of black dogs date back centuries. The earliest recorded appearance in English literature that Norman has found is from 1127. There are plenty of reasons people tell black dog stories, he says. Some of the stories were probably concocted to keep children away from dangerous places. But many black dog stories can be attributed to smugglers who wanted to keep interlopers away from their coastal smuggling routes. Smugglers were fond of inventing all sorts of scary stories to keep pests away: Norman has heard stories of smugglers painting the body of an unlucky horse with luminous paint in order to convince townspeople that a particular road was haunted by a headless horse and coach.

“I still get reports,” says Norman. “I’ve got pages of reports from various places since the year 2000, for example.”

There are whole websites devoted to black dog sightings, like the encyclopedic Shuckland, which catalogs sightings by location.

And then there was the discovery this May that had news outlets breathlessly wondering if definitive evidence of Black Shuck’s existence had been uncovered.

Not quite, says Lisa Wescott Wilkins, managing director of Dig Ventures, a crowdfunded archeology excavation project. The group’s team unearthed the skeleton during a dig at the ruins of an abbey dating back to the 1100s.

“No, there’s no way,” says Wilkins, “There’s not even a dog alive besides maybe a direwolf on ‘Game of Thrones’ that would be seven feet tall from nose to toe ”“ that’s massive!”

The skeleton, she says, was about the size of a Great Dane. Without radio carbon dating, they can’t say exactly how old the skeleton is, but they do know it suffered a wound to its leg that would have given it a significant limp and that it was buried in a grave.

The find resonated with dog lovers at the dig, Wilkins said, because “this wasn’t an animal that sort of crawled off somewhere to die, this dog had clearly been taken care of and buried out back where the sort of kitchen area of the Monastery would have been of the Abbey when it was active. So when we uncovered it, we were thinking to ourselves, god, these are clearly people who had an emotional attachment to this animal and cared for it during its lifetime. So for us the big story of that sort of moment was dog owners and dog lovers, and just thinking about what it would have been like when the dog was buried.”

Some people have claimed that black dogs are actually leopards or pumas that roam England. Others think black dogs are a kind of hallucination caused by a dream state. Norman allows that there may be some truth to those theories, but that he has also heard stories that he simply can’t explain.

“I’m not a paranormal researcher, I’m a folklorist; so to me, what they’re seeing isn’t important or relevant,” says Norman. “Because what I’m interested in is what they’re reporting, and how that fits into the other stories that people have reported over time, and how that shared consciousness or shared collective memory operates.”

Of course, sometimes the answer is earthly, as the author of Shuckland notes on a description of a “dubious sighting”:

“As the witness himself says, there’s a fair chance that on both occasions this may well have been an ordinary dog.”

Have you seen a black dog? Mark Norman is collecting stories of sightings, and you can reach him at [email protected]

[…] and again I’ll find myself on the receiving end of a report in which the witness encounters a large, red-eyed black dog or a giant wolf staring at them while in bed or on the bed. And usually in the dead of night; […]

[…] and again I’ll find myself on the receiving end of a report in which the witness encounters a large, red-eyed black dog or a giant wolf staring at them while in bed or on the bed. And usually in the dead of night; […]

There is a similar legend in the Black Country/ Shropshire. This is what I was told. It’s called the Shrike or the Skrike, depending on who is telling the story. It’s always silent. There’s no growling and no noise other than the padding of giant paws. The only thing you will see is the flash of it’s eyes. You’ll know it’s there by it’s breath and the pricking of the hair on your neck. If you ever see it’s eyes, it’s a portent of death. It could brush past you on a path, it could run past you in an… Read more »