Photographer Lindsay Blatt makes art out of fruit, and thread. 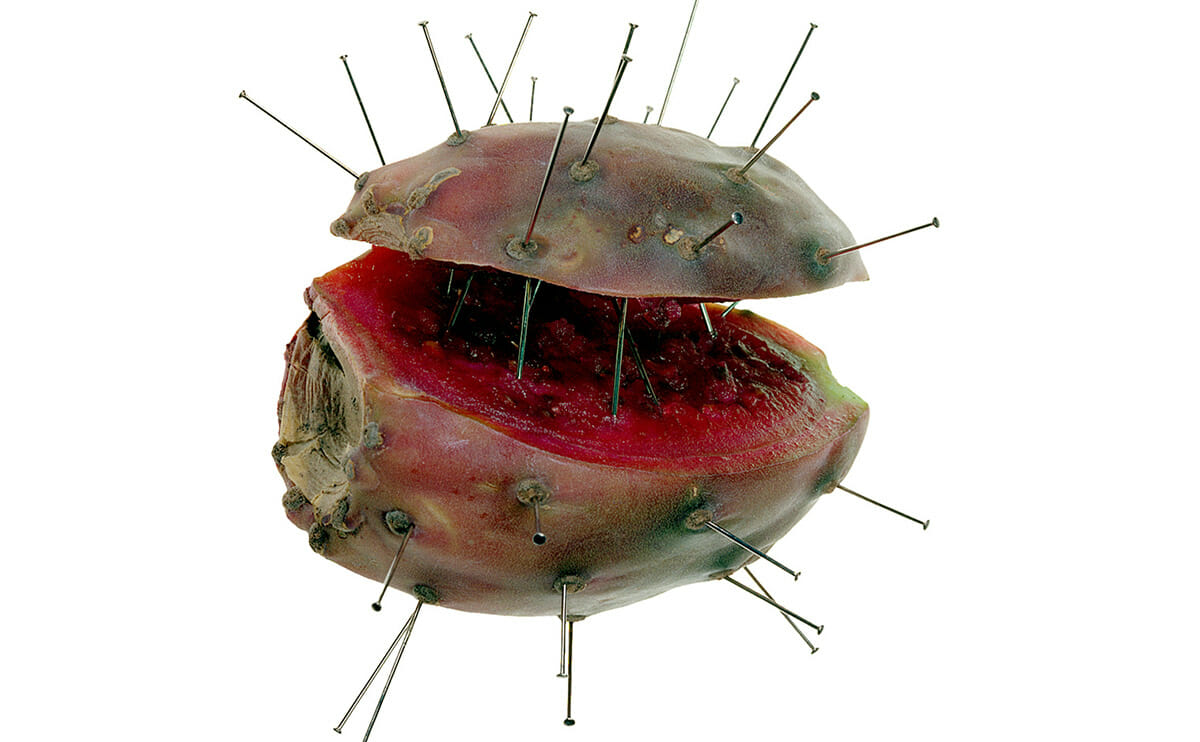 Modern Farmer: What exactly are you doing with the food we see?

Lindsay Blatt: I was learning to use a light table, which is how these are taken, shining light through the bottom and off the object from above, using a 4×5 camera and negative film. The first iteration was looking at it more as X-ray photography: slicing things really thin, blasting a bunch of light through it and seeing the inside of the food. Like grapes, strawberries, Kiwi skin, and stuff like that. From there, I thought about the idea of putting something back together. Damaging it, or something that was damaged, and then mending it. That is how it morphed into the series it became, looking at this concept of how objects and people can be damaged but also healed as well.

MF: You named the project “My Sentiments Almost Exactly.” What was the thinking behind naming it that?

MF: What did you do with the food after?

LB: Once it has been under the light for awhile and split open and in a grubby school photo studio, I don’t think I ate it. It was pre-days of me being a composter. So I think they got trashed. I ate the ones I couldn’t just buy one of.

MF: So, what are we looking at here?

LB: That is an aloe plant. This in particular gets to the idea behind the project, because aloe is used for healing and is medicinal. It’s like when you were in high school and you would dissect something and peer into it.

LB: That is a type of fruit called a “Beautiful Monster” and I think it is from Central or South America. I had never seen that before. Being in New York, there are all these markets and you can find all these kinds of things that aren’t what you grew up with necessarily. That was something I found and thought of as a really beautiful object. Again it was dissecting something, breaking it apart without completely destroying it.

MF: This one looks like a piece of blood orange.

LB: Yep. That one has so many visceral qualities that some of the other ones don’t have. The decision to use thread versus pins came about based on the material and the form the plants take.

LB: This is a fiddlehead fern and it’s edible. I think there is something about them that you can’t just go and pick them and eat them. [Ed Note: Some varieties of fiddleheads have been found to have carcinogens in them.]

MF: This is two slices of kiwi?

LB: Yeah. That one is more the open book view of something. It’s a familiar thing to most people, but then there’s the idea of re-assembling it.

LB: Yep, that one is mango. It’s kinda internalizing that sort of reaction to curl up in a little ball and protect yourself in a way. It is turning in on itself and holding it all together.

MF: This is also a mango?

LB: Yes, there are two mangos. That is a similar take to the kiwi one. Cutting something totally in half and trying to reassemble it.

MF: That is a lot of mushrooms.

LB: That is one of my favorites. It’s bound-up in a way. It is the only one with numerous pieces to it. This one is more trying to contain something before it can get out of control.

MF: This is one of the more violent images.

LB: That is a passion fruit. There is something about it, when I was at the market picking out what to shoot, it was something I had never seen before. I liked the color of it on the outside and when I sliced it open I was like ‘Oh my God, what is going on in here.’ It had this green gelatinous stuff, it looked like something out of “Alien” that had seeds in it. It was very unexpected and it seemed like a living animal instead of a fruit, like an organ. It was interesting because of the way I propped it together. Once all that green stuff was scooped out, it was very fragile. The pins are what is keeping it open.

MF: This is a pomegranate cut in half?

LB: That one is harder to make out. There is a little part in the top left where there are seeds that are stacked up on top of each other. This is again like the mushroom thing: the protection and the way they ball up and leave it in one place. There is a clump of seeds that are pinned on.

MF: This is a prickly pear. What did you do to it?

LB: The prickly pear is kind of interesting because I grew up in Arizona and those are really common. People have them in their front yards. For me, living in New York, it was amazing that I saw it for sale as produce. You don’t necessarily see it as something you could buy, eat and prepare somehow. It was amazing to me. I sliced it open, kind of showing the anger and the irateness. It’s a very literal translation, as far as having the pins come out it.

MF: The next is a snow pea.

LB: That, to me, is kind of the more superstar image, as far as the mending aspects of it. There are those seeds inside, which I took out, which you don’t necessarily notice. So it is like stitching it back together and making it whole again.

MF: What kind of fruit is this?

LB: It’s a horned melon. I scooped out the seeds. That is the only one which doesn’t have anything. It is yet to be determined. Which way will this one go?