At a moment when corporate conglomerates are poised to control nearly all grain processing in the U.S., a small but growing confederacy of independent millers across the country is working with farmers to source and grind fresh flours for local customers. 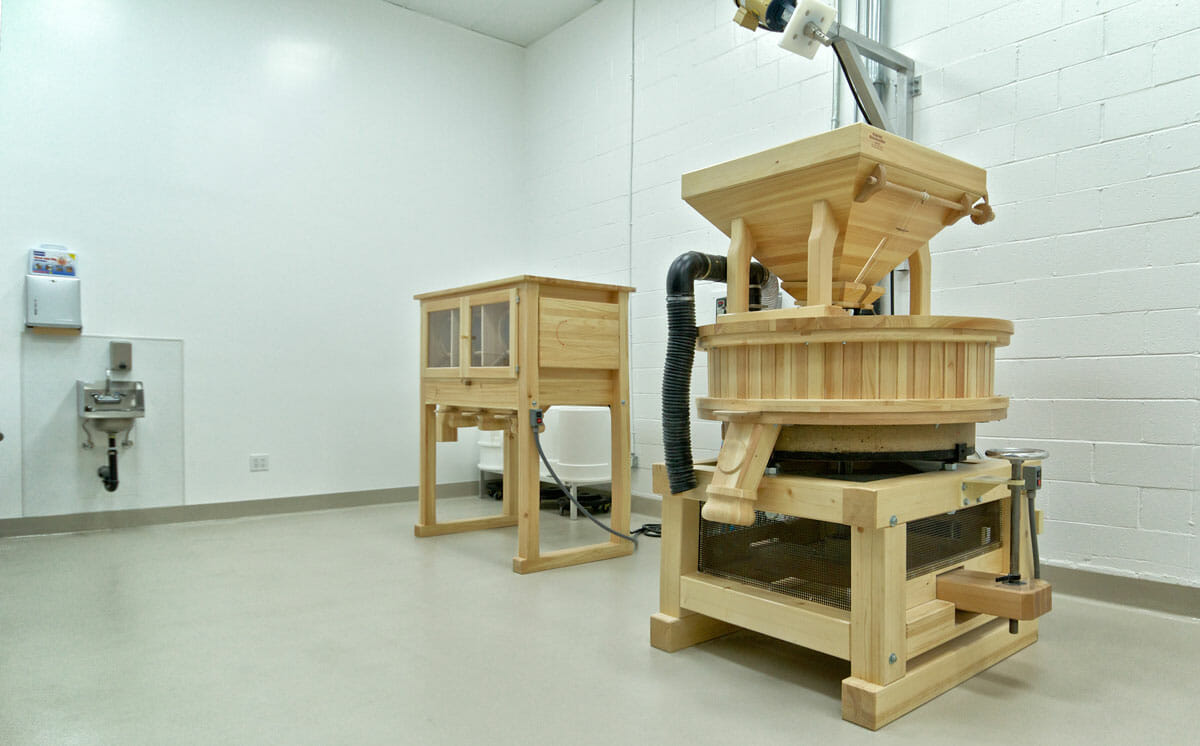 Nan Kohler is a genial revolutionary in an ancient profession: she’s a miller. At a moment when corporate conglomerates are poised to control nearly all grain processing in the U.S., Kohler has joined a small but growing confederacy of independent millers across the country working with farmers to source and grind fresh flours for local customers. She calls wheat “the glaring missing link in the farm-to-table movement.”

Kohler, a former pastry chef, and her partner, TV producer Marti Noxon, opened Grist & Toll this past December in a small light-industrial corridor off the 110 Freeway in Pasadena. The urban location, some ten miles from Los Angeles’ downtown, was an essential part of her mission: reacquainting people who care about food with a process that was once at the heart of every community.

“We’re so removed from milling now. This whole thinking about wheat and grain and flour is not part of our awareness yet, but mills once popped up wherever there were missions,” Kohler says.

‘This whole thinking about wheat and grain and flour is not part of our awareness yet, but mills once popped up wherever there were missions.’

Amid the sleek modern concrete and reclaimed wood aesthetic of Kohler’s shop, the mill itself still holds a kind of old-world magic. The 2,500-pound pinewood Osttiroller was built in Austria and shipped in one piece to Grist & Toll, and visitors can look through a large window into the back room to see the imposing machine at work.

What Kohler practices is called whole-berry milling, which means that evehn after sifting, she could never make the kind of pristine white flour you see on supermarket shelves. Rather than separate the bran and germ from the white endosperm at the outset, as commercial millers do, Kohler crushes everything together. “The flour will inherently be more golden or more grey or more beige, depending on the specific grain, because all those oils and the color and everything gets smashed together while it goes through the stones,” Kohler says. “So even if I remove the bigger flakes I already integrated a lot of that into the final product.”

This process preserves the unique characteristics of the grain Kohler grinds, and differentiating between those grain types is a central tenet of Grist & Toll’s philosophy. “There’s a lot more flavor than you’re expecting from wheat, and there is actually a diversity of flavor,” Kohler says. She works closely with farmers to source her identity-preserved local and heritage grains, the current selection of which includes Sonoroa soft white whole grain flour, organic spelt, organic whole rye, teff, faro, whole grain polenta, and Triple IV hard red wheat.

The Triple IV, a modern winter wheat, comes from Tom Shepherd, a farmer in the Santa Ynez Valley who only recently joined California’s burgeoning local grain movement. His first wheat planting two years ago was a sort of drought-friendly experiment on his 40-acre organic farm, and it’s proved enough of a success that Shepherd is trying again this year with an heirloom variety. He says that five years ago, he knew of no one else growing wheat in his area, and now there are at least four others. “In my 40 years of farming, all these swings of interest happen, and right now it’s grain,” he says. “The heirloom grain is where there’s a lot of interest right now.”

Kohler and her mill have already won over several fans in the area, including chef Bruce Kalman, who opened his Italian-meets-California-locavore restaurant Union in March. Kalman uses Grist & Toll’s hard white wheat flour in an olive oil cake and its spelt flour in a cavatelli pasta. He also worked with Kohler to select just the right grind for his polenta, and he raves about the results.

‘The heirloom grain is where there’s a lot of interest right now.’

“When I get grain from her, I know what day she milled it, which makes a difference in the end product,” Kalman says. “What bag of flour do you open that you can actually smell? It still has all of its natural characteristics and we get to use it pretty much right away.”

Grist & Toll has also been drawing in bread lovers with a series of communal bakes, where locals show up with loaves of their own dough to bake together in a big mobile wood-fired oven. Kohler is just about to conduct her first on-site baking class, and she regularly advises customers on factors like the gluten and protein levels of her various grains, and how best to use them in recipes. It’s interactions like these, along with the fact that she can offer customers flour that’s been milled within 48 hours of its purchase, that make the urban location such a vital part of Kohler’s project.

“I think that if something like a local grain movement and a fresh flour movement is going to be successful, then there need to be people like me in the city to actually be able to have that face to face contact with consumers,” Kohler says. “More than a lot of food-centered businesses, the mill just sings of community and interaction with people, and that’s really important to us.”