This Cat Is a Shepherd - Modern Farmer
Animals, Lifestyle

This Cat Is a Shepherd

Bodacious is a very special cat. He's poofy and personable, the camera loves him and oh yeah, he's a shepherd. 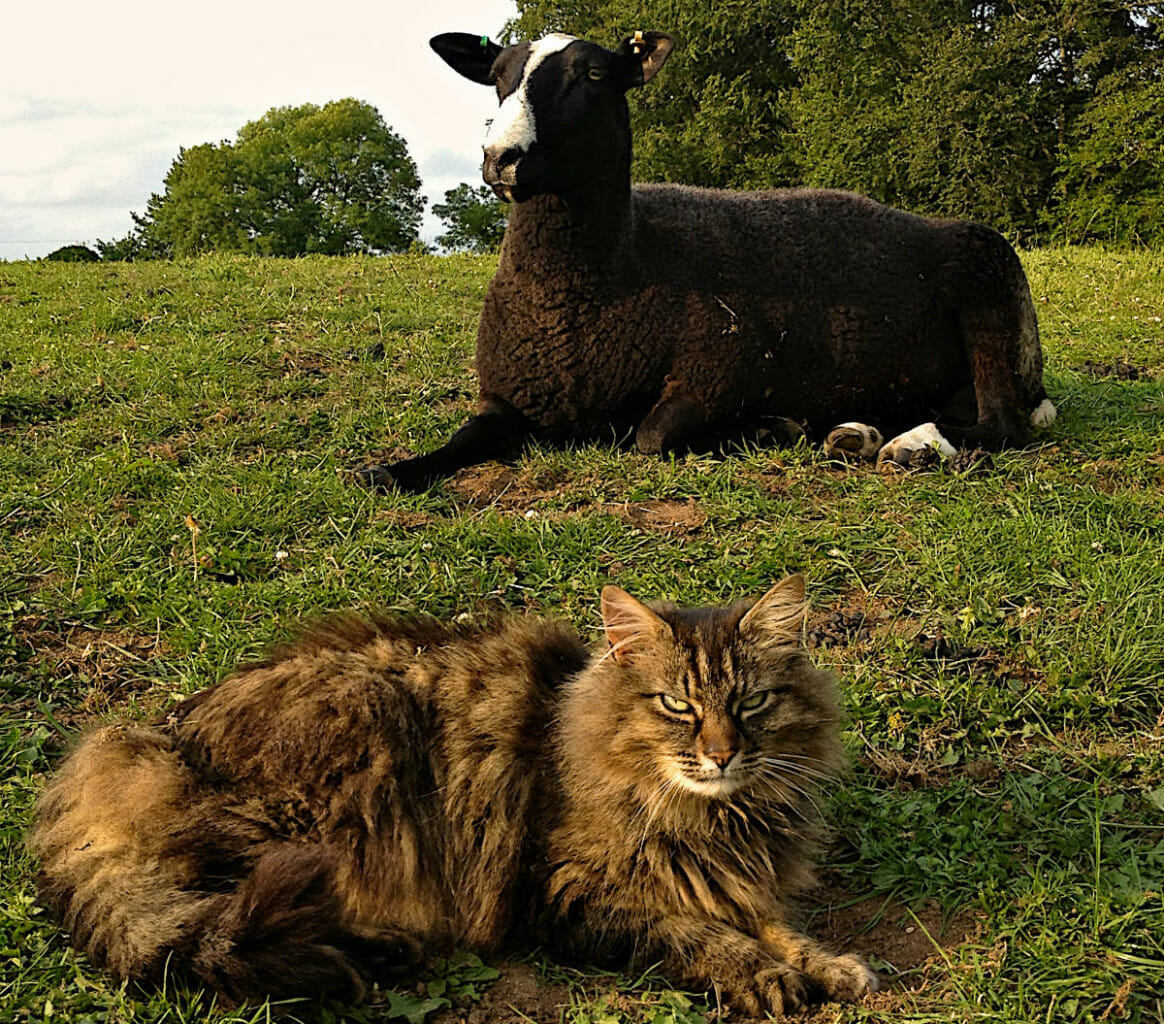 If you’ve ever owned (or met) a cat, the idea of using one like a sheepdog is absurd. Cats hate to be bossed, they’re too puny to scare a sheep, and they’d much rather take a sunshine nap than run around doing farmwork. Even though they have evolved to recognize their owner’s voices, studies say that they just don’t care.

Still, as cat shepherds go, Bodacious is at the top of his field. He’s assisted in lamb births, barbed wire sheep rescues and hypothermia resuscitations, to name a few. His owner, Irish farmer Suzanna Crampton, says she could not function without him.

Modern Farmer caught up with Crampton for a lively Skype call — punctuated with loud meows and the pings of the Cat Shepherd’s Twitter notifications.

Modern Farmer: So where did you find Bodacious?

Suzanna Crampton: Funny story, that. One day about five or six years ago, he wandered into a shop in Kilkenny. It was a novelty toilet seat shop, you know the type? Funny seats with barbed wire or fish swimming around on them. The store is gone now but these were boom times in Ireland. Anyway, he wandered in one day and we couldn’t track down his owners. The store owner couldn’t keep him so she asked me if I could. I’m always taking home strays so I was an easy mark.

MF: Why did you call him Bodacious?

SC: Years ago I was living in New York for a bit when some Texan people said to me, “God you’re a bodacious woman!” I thought it was quite rude at first, until someone told me what it means. Seemed like a perfect name for this cat.

MF: What did you first notice about his personality?

SC: He had absolutely no fear. Bodacious (some people call him Mr. B) was following me close pretty soon after I got him. One day I was letting the horses out and he stood his ground there, hooves clomping all around him. It’s not that he’s some dizzy blonde or stupid; he’ll get out of the way if there’s some real danger.

Is Bodacious really a good shepherd? I mean, he’s a cat.

MF: How does Mr. B get along with the sheep?

SC: The ones he knows, he’ll go up and headbutt them, have a conversation. Tell you one thing though — he’ll take no truck from no one. If anyone is getting too bolshy, he’ll reach out and give ’em a right smack.

SC: (laughs) Oh you know, being bold, acting up, stomping their feet and all that. He’s got a great relationship with the young lambs, kind of looks out for them. And when they’re full-grown and wise, the sheep have nice calm conversations with him. It’s just that in-between age, their teenage years, when the sheep get bolshy and out of line.

MF: Okay, here’s a tough question for you. Is Bodacious really a good shepherd? I mean, he’s a cat.

SC: (long pause) That’s a hard one to answer. I certainly couldn’t do this without him. When it’s 3 a.m. and I’m out there alone in the dark, waiting for a ewe to lamb and he’s sitting there in my lap purring, that’s what keeps me going. Psychologically he is very helpful.

MF: Got it. And he clearly gets along well with the sheep. But he can’t, you know, herd them, right?

SC: Well I suppose not. I’ve got a border collie that’s better for that sort of thing. But anytime there’s a crisis, like when a lamb got stuck in the fence, he’s right by my side watching over things. He’s helpful to me.

MF: He’s certainly building a name for himself.

SC: It’s true! He’s become quite the little celebrity. I’ve already been approached to write children’s stories about his adventures. Oh and he was on the radio after our lamb Smudge got hypothermia and almost died; I had tweeted out pictures of Smudge and Bodacious. That must have been a slow news day — we were a trending topic on Twitter!

MF: Do your other cats want to be shepherds too?

SC: Well they’re certainly jealous of all the attention this one gets. I don’t know though; it takes a real special personality to be the Cat Shepherd. They can’t all be Bodacious.

To read more about the Cat Shepherd’s adventures, check out the blog at Zwartbles Ireland.

Love the article I just read about, “The Shepherd Cat”.

Popular
7 Smokable Plants You Can Grow That Aren’t MarijuanaBrian Barth
Hell in High Water: The Story of Devils Lake, North DakotaSharlene Breakey
Record-Breaking Egg Profits Prompt Accusation of Price GougingClaire Carlson, The Daily Yonder
New Solar Panels Allow Farmers to See the LightNaoki Nitta
6 Differences Between Llamas and AlpacasAndrew Amelinckx
Explore Modern Farmer
Related
Environment, Labor, Water
California Farms and Farmworkers Attempt to Recover From Record FloodsNaoki Nitta
Books, How-To, Lifestyle
How to Turn Your Garden Into a Business, No Matter the SizeEmily Baron Cadloff
Food Security, Labor, news
A New Egg Co-operative Has Hatched in the Western U.S.Lindsay Campbell
Food Waste, Plants, Technology
New Solar Panels Allow Farmers to See the LightNaoki Nitta
wpDiscuz
We use cookies on our website to give you the most relevant experience by remembering your preferences and repeat visits. By clicking “Accept”, you consent to the use of ALL the cookies.
Cookie settings ACCEPT
Privacy & Cookies Policy