Meat Ups: When Your Butcher Comes To You - Modern Farmer
Food & Drink, Lifestyle

Meat Ups: When Your Butcher Comes To You 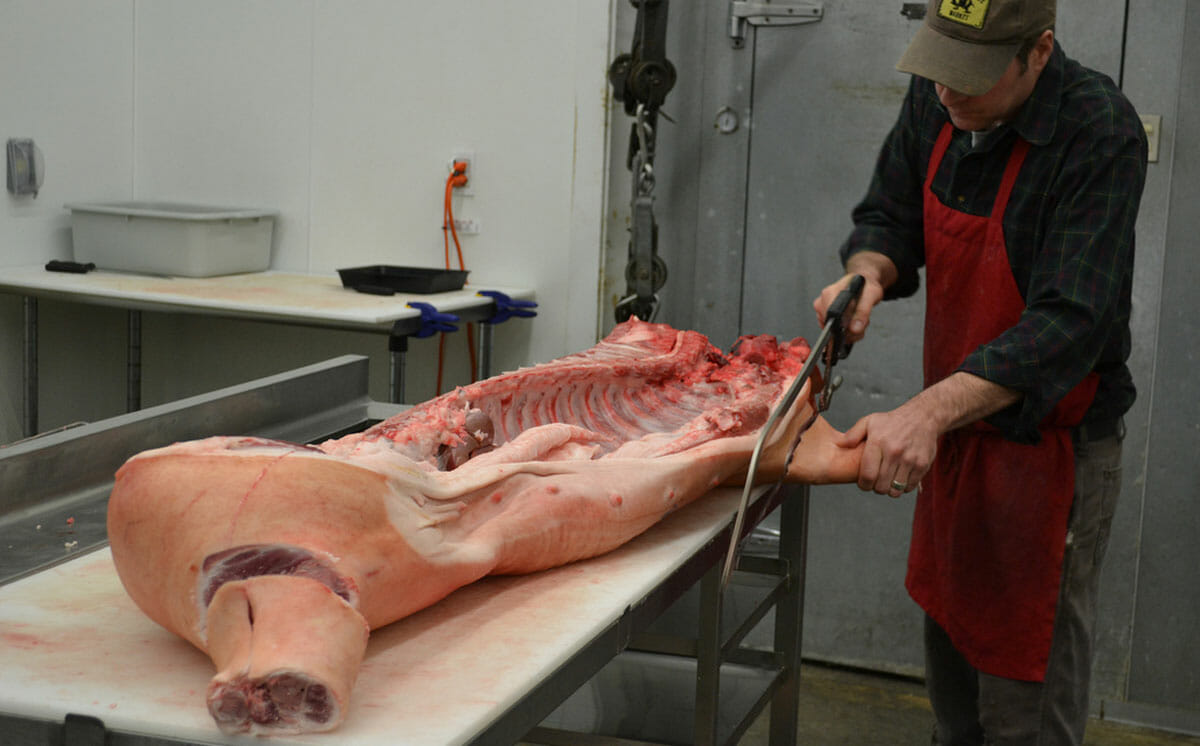 And Slayton was the reason we had gathered in my kitchen that night.

I was hosting what Slayton calls a “Meat Up,” or a gathering of meat-loving folks there in part to socialize but mainly to buy meat.

Slayton hatched the idea after his mother-in-law asked him to bring some of the meat he butchered to her house for her neighbors to buy. The experience changed the way he thought about his business. “I saw everyone coming together with their wagons to bring their meat home, chatting and exchanging recipes. And they had questions for me about how the animals were raised and how to cook the meat,” he says. “I realized that I had missed the boat – my business wasn’t just about moving meat, it was about the sense of community that comes from buying and cooking local food.”

Not to mention: Slayton’s shop is about 80 miles round trip from Portland. There is a wider audience for his meat than he can get to come to his shop. So he started to bring his meat to his customers.

‘I realized that my business wasn’t just about moving meat, it was about the sense of community that comes from buying and cooking local food.’

Now Slayton totes his products to eight regular Meat Ups hosted around southern and midcoast Maine. Customers gather at coffee shops, offices or at people’s homes. They’ve already put in an order for what they want. Some Meat Ups are a quick pickup, like at a chiropractic office in Damriscotta. Others, like mine, are more like a cocktail party. While other butchers might balk at the time spent on this side project, almost 20 percent of Slayton’s annual revenue comes from these events.

Are Meat Ups the answer to small-scale butcher shops that want to stock local, sustainable products? “My knee jerk reaction is no,” Slayton says. Instead of eating dinner on many Thursday nights with his family, he’s driving around the state with a minivan packed with meat.

Not that Slayton doesn’t do a fine business at his storefront, which he took over four years ago after apprenticing with the previous owner and at Tenuta di Spannochia, a working farm in Tuscany. Customers are willing to make the drive to buy the meat he butchers: Everything in his shop is humanely raised and slaughtered in Maine. Each cut is labeled with the farm it came from. The sausages are made from trim from a single farm. Customers can order full, half or quarter animals from him, or make special requests. “I’ve had customers come in and point out the exact cut they want on a hanging carcass,” Slayton says.

But the trip can be a long haul. I took the 45-minute drive from my house to his market one afternoon in March. Slayton, who is clean cut and charismatic, greets me in the shop. “Everything about this place is inconvenient,” he says with a laugh. Slayton leads me to where he, the other two butchers and one apprentice are working on half a pig carcass hanging from the ceiling. I watched as they turned it into spareribs, bone-on pork chops, ham and more.

‘We can tell them what they feed their animals and how they treat their animals. That you won’t find at Whole Foods.’

“We’ve been to the farms, we can explain to the customer who [the farmers] are, where they live and how many kids they have,” Slayton says as he debones a ham. “We can tell them what they feed their animals and how they treat their animals. That you won’t find at Whole Foods, I don’t think you’ll find that anywhere. That’s what we do.”

The door to the shop opens and longtime customer Julie Hausman comes in. “I refuse to buy meat at the grocery store anymore. After you’re used to this kind of meat, it doesn’t taste as good. I don’t mind paying more for it,” she tells me as Slayton finds her order.

A week later, I arrived at another Meat Up ”“ this one hosted at Damariscotta Chiropractic Health Center. When I arrive, Slayton is there with a mini van full of coolers packed with meat. For the next half hour, people come and go. Some take the time to ask Slayton questions, others just grab their meat and exit. There are elderly couples, moms with young kids, single 30 somethings. Debbie Mikulak of Round Pond buys all of the meat her family eats from Slayton. “How the animal is raised affects the quality,” she tells me. “The meat is very tender and the sausages are superb.”

Chiropractor Susan Giglia started this Meat Up group in January 2013, and it’s one of Slayton’s most dynamic groups. Giglia and her husband had been vegetarians for 25 years when they decided to eat meat again for health reasons. “Since we were ethical vegetarians, it was very important to get humanely raised, healthfully and naturally raised meat that was as organic as possible, and we wanted to support local farmers,” she says. “It was apparent when I met Ben at the Meat Up that he was the real deal.”

Slayton visits each farm partner at least once a year, and he has ended relationships with ones in the past based on how animals were treated.

And he is: Slayton visits each farm partner at least once a year, and he has ended relationships with ones in the past based on how animals were treated. Because many of the farmers Slayton works with told him that slaughtering and processing was the main challenge of being in the livestock business, he partnered with L & P Bisson and Sons Meat Market & Farm, which has a USDA inspected slaughtering facility, to get a dedicated slaughter day each week for his farm partners. (Slayton slaughters chickens at his market.) Every Tuesday the carcasses arrive at his shop, unlike your typical grocery store, which tend to get in large hunks of meat already removed from the carcass, or even already broken down into the cuts you see in the packages on the shelves. “The problem with getting meat in boxes is it starts to remove the connection you have with the farmer and the animal itself,” he says. “We see ourselves as facilitators to creating a stronger relationship between farm and family.”