Bear Bile Farming: A Practice That Continues to Bear Scrutiny

The ancient practice of harvesting bile from bears means over 25,000 bears are currently in captivity in China and Vietnam. 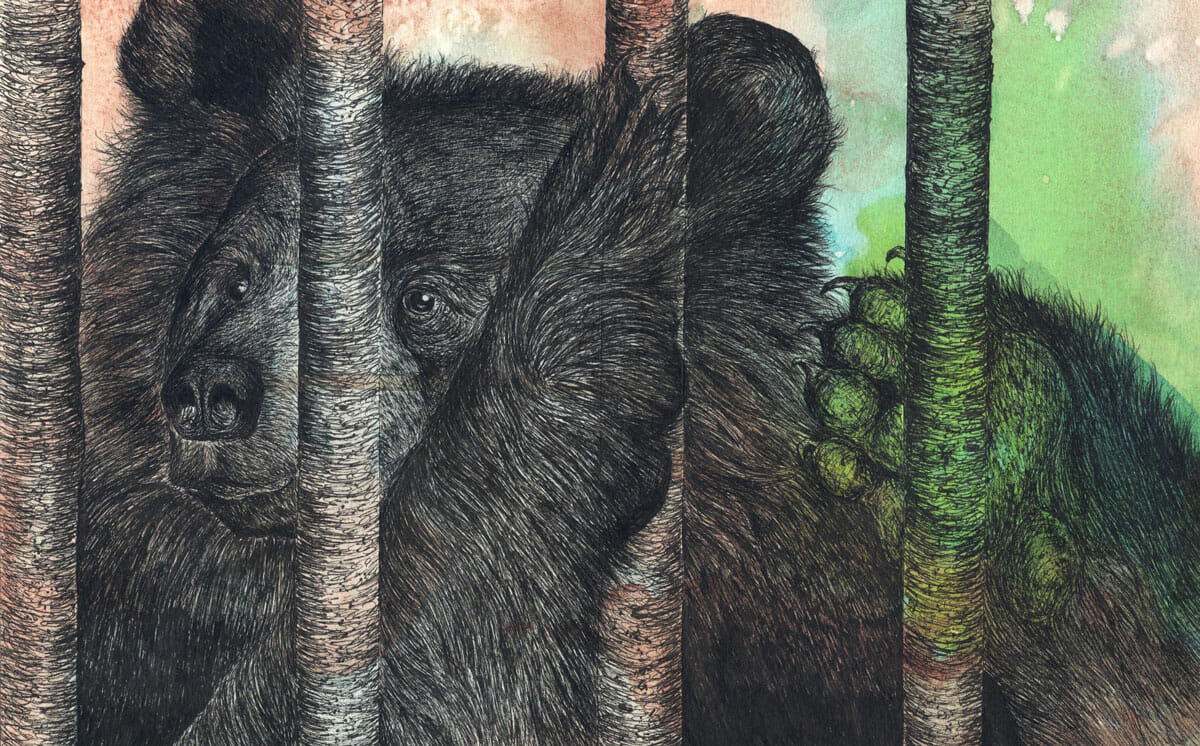 But this is no stateside industrial-ag controversy — it’s the current international debate over bear bile farming.

A quick primer: For thousands of years, bear bile has served as a traditional Chinese remedy, said to shrink gallstones, improve vision, cure fevers, and, more recently, neutralize hangovers. Traditionally, bile was extracted from species in the wild, but when China’s bear population became endangered in the 1980s, the country’s bile farming practice emerged. According to Animals Asia Foundation (AAF), a Hong Kong-based nonprofit, more than 10,000 bears are currently kept on bile farms in China, with another 2,400 housed illegally in Vietnam (the country officially banned the practice in 2005) and more scattered farms popping up in Laos, Myanmar, and North Korea.

Traditionally, bear bile was extracted from species in the wild, but when China’s bear population became endangered in the 1980s, the country’s bile farming practice emerged.

The moon bear, or Asiatic brown bear, a critically endangered species, is the most commonly harvested species, though sun bears and brown bears are farmed as well. Farmers breed the bears in captivity, usually held in extreme mental confinements — called “crush cages” — before inserting tubes through a permanent hole in their abdomens to access the gall bladder; bears are then “milked” of their bile up to three times daily. Most of the animals will spend the duration of their lives within the farm’s confines; injuries suffered during their lifespan can include infection, permanent disfigurement, and broken teeth from chewing on the metal bars.

Bear bile farming has long been the target of animal rights activists, but the last several years have seen a sudden uptick in international outrage. Why the uproar now?

“Everything reaches a certain pitch in momentum,” says Theodora Capaldo, EdD, president of animal advocacy organization NEAVS. “Sometimes you have to say something for 30 years, and then people start to pay attention.” Capaldo also credits Jill Robinson, founder and CEO of AAF, a UK-born expat who has spent more than 25 years organizing within Asia to halt the practice. “She has the brilliance … to understand that this is not an “I/thou” but a ‘we’ problem,” says Capaldo. In 2005, Robinson established AAF’s first bear sanctuary on a former bile farm outside Chengdu in the Sichuan province, where approximately 150 rescued bears currently roam the 12-hectare (approximately 29-acre) grounds.

Credit also goes to China’s burgeoning animal rights movement. In 2012, an undercover journalist for the Xiaoxiang Morning Post filmed illicit farm footage showing crying black bears confined in metal cages barely larger than their own bodies (watch at your own risk). And earlier this year, Guizhentang Pharmaceutical, China’s largest producer of bear bile extract, faced fierce opposition when it sought to treble its bear farm holdings as part of its initial IPO offering; even legendary artist Yao Ming entered the fray, helping to circulate a petition in protest. Social media added to the grassroots propulsion: “There’s no one who can look at a bear in a crush cage and not say, ‘This needs to stop right now,’” says Capaldo.

Yet bile farming continues to prove a growth industry. According to a 2013 New York Times piece, the number of bears farmed in China has more than doubled despite government assurances it would curb the practice. More recently the government has gone on the attack, suggesting that the country’s animal rights advocates have been bought out by Western pharmaceutical companies seeking to discredit Eastern medicine practices. And they’ve worked to soften public impressions of the practice itself, to dubious effect: Fang Shuting, chairman of the China Association of Traditional Chinese Medicine, was widely derided after a 2013 press conference in which he insisted the bile extraction process was “natural, easy and without pain.”

Ultimately, the future of the practice may rest in the hands of the farmers themselves. In 2012, Flower World, a state-owned horticulture and landscaping company in Nanning, halted its bile extraction program, believing the practice to be “very cruel”; its grounds will serve as the location for the second AAF sanctuary, currently in the planning and fundraising stages. And in March, a bile farmer in Vietnam publicly gave up his final black bear, professing he no longer wanted to see the animal suffer and issuing an apology to the Local Forest Protection Department for violating Vietnam’s laws.

But in another echo of the U.S. industrial agricultural debate, some farmers still protest the prioritizing of an animal’s well-being over their own.

“People talk about animal welfare . . . but bear farmers aren’t getting any welfare,” South Korean bear farmer Yun Young-deok told the Japan Times. “We feel like we are dying earlier [than our bears].”

Popular
The Fertilizer Shortage Will Persist in 2023Shea Swenson
7 Smokable Plants You Can Grow That Aren’t MarijuanaBrian Barth
Agricultural Runoff Pollutes Well Water, a ‘Public Health Crisis In the Making’Madison McVan, Investigate Midwest
Move Over, Mezcal. A Sustainable Tequila Alternative Is Taking Over.Hollie Stephens
Why Don’t We Eat Turkey Eggs?Dan Nosowitz
Explore Modern Farmer
Related
Features, Food Security, Labor
The Rise of Virtual Farmers MarketsLeah Borts-Kuperman
Environment, Labor, Water
California Farms and Farmworkers Attempt to Recover From Record FloodsNaoki Nitta
Books, How-To, Lifestyle
How to Turn Your Garden Into a Business, No Matter the SizeEmily Baron Cadloff
MTMF, Plants
This Modern Farmer Wants You to Grow a New Potato StrainBevin Cohen
wpDiscuz
We use cookies on our website to give you the most relevant experience by remembering your preferences and repeat visits. By clicking “Accept”, you consent to the use of ALL the cookies.
Cookie settings ACCEPT
Privacy & Cookies Policy