That little green blob of paste on your sushi platter? That's probably not real wasabi. 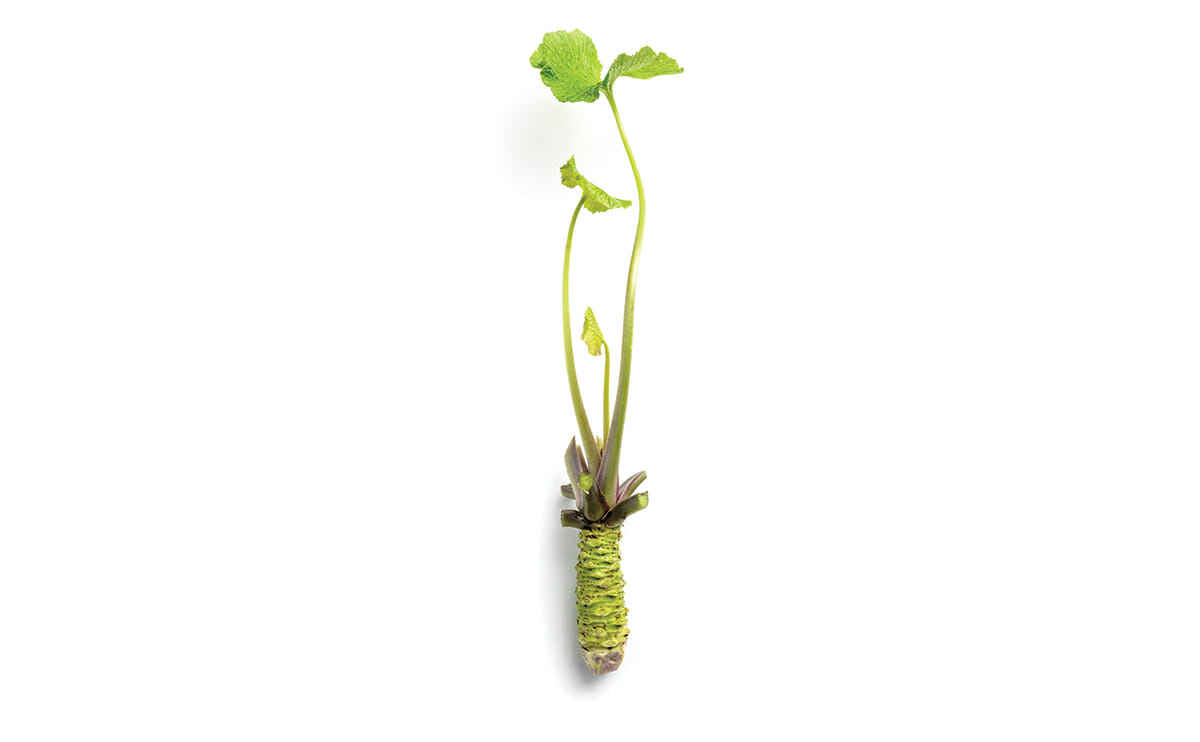 The entire wasabi plant (the rhizome, root, stem, and leaves) can be utilized but the rhizome is used most frequently in cooking because this is where the plants natural flavors is most concentrated.

The plant takes three years to mature to its full height, of about 2 feet. The perennial plant has been harvested from cool, shady mountain streams for nearly 1,000 years. Though cultivated mainly in Japan, wasabi has been found growing in parts of China, Taiwan, Korea and New Zealand.

‘When people started eating it, they stopped getting sick.’

The plant is a challenging crop to cultivate because it is happiest growing in an environment most similar to its origin. Dr. Brian Oates, the founder of Pacific Coast Wasabi (the sole wasabi farm in North America), believes unconventional hydroponics is the answer. Oates is cultivating over 22,000 pounds of wasabi on just three acres of land ”“ an impressive haul he credits to his hydroponic set up.

Oates was initially drawn to the wasabi plant for its medicinal properties. Wasabi fascinated Oates because its culinary and medical histories were so deeply intertwined. “When people started eating it, they stopped getting sick,” Oates says; the plant appeared to combat bacterial contamination the raw fish encountered en route to market. Today, the wasabi plant is mostly celebrated for its cancer fighting properties. Researchers at the American National Cancer Institute believe this occurs because the plant eliminates excess hormones that exist in the body causing breast and prostate cancer.

The wasabi that accompanies most sushi platters is not wasabi at all but a mixture of horseradish, mustard, starch and food coloring.

The wasabi that accompanies most sushi platters is not wasabi at all but a mixture of horseradish, mustard, starch and food coloring. Real wasabi is a rare (and expensive) sight to see. The greatest challenge of marketing his product Oates explained has been “educating the marketplace”. The wasabi rhizome, that runs for $70.00 per half-pound, is a hard sell to customers that think it comes free with purchase. The paste made from real wasabi is bright green, aromatic and lively. It’s used by chefs in Japan and high-end restaurants in the U.S., and has a sweet aftertaste, unlike its imitation, which provides mainly a burning sensation in the nasal passages.

True wasabi’s flavor will dissipate within 15 minutes of preparation, which is why sushi chefs often place it between the rice and fish to prolong the flavor’s lifespan. Two of our favorite restaurants that are using real wasabi are located on opposite coasts. Mashiko in Seattle, Washington uses the real stuff, and also sources their fish and produce from purveyors who are devoted to sustainable fishing and farming practices. Masato Shimizu, the head chef of 15 East in New York, New York, buys his wasabi from the Amagi Mountains, located in the Izu Peninsula, Japan.

So next time you’re sitting down to a plate of California rolls, enjoy that green paste. But just know you’re miles away from experiencing the real thing.