With over a thousand reviews on TripAdvisor, the fictional farm from "The Office" is a top web destination, even if you can't go there IRL. 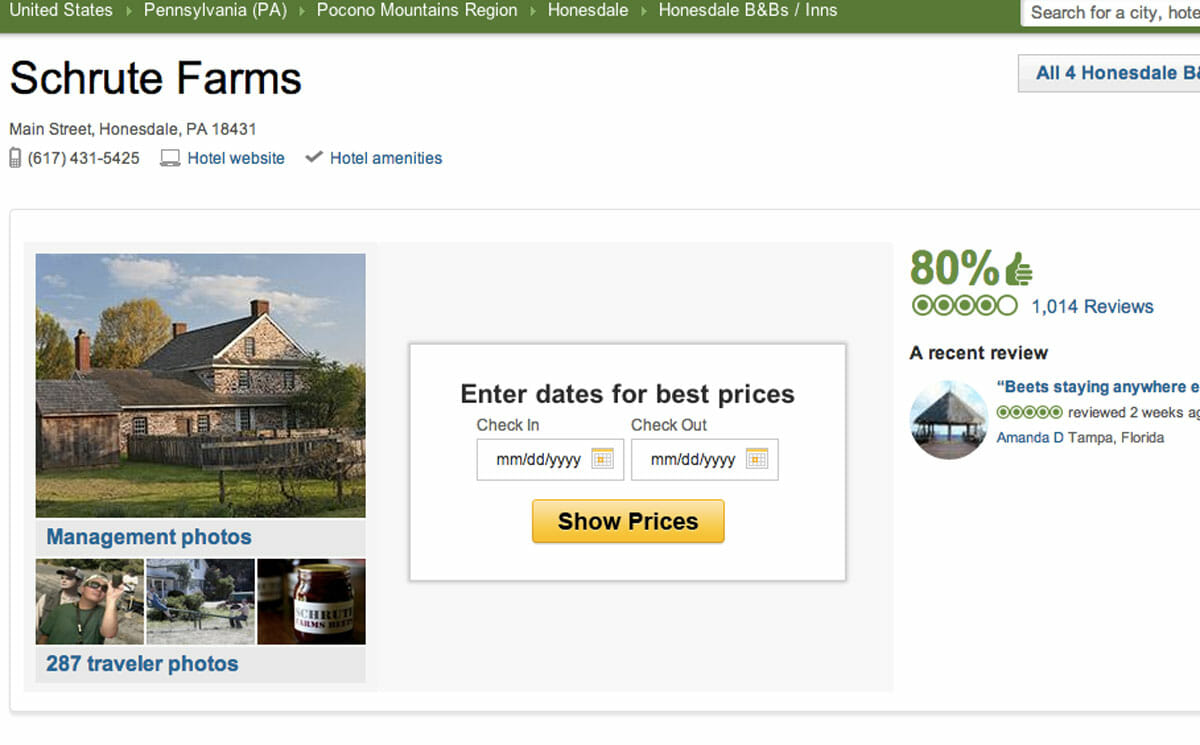 If you call TripAdvisor’s listed phone number for this fictional agritourism destination, don’t expect to hear that signature greeting from Dwight Schrute, the beet farmer and Machiavellian paper salesman of NBC’s “The Office.” In fact, don’t expect anyone to pick up at all. We tried. It just rang and rang.

The page was started in 2007 by the show for inclusion in an episode. Though “The Office” finished its 9-season run last spring, the listing has developed a cult following and reviews are still pouring in for Schrute Farms, which has now garnered over a thousand of them.

Paul Lieberstein, known on the show as the milquetoast Toby Flenderson, wrote the episode in which the site first appears. “We thought it would be fun, but then we didn’t think about it anymore,” he told the New York Times.

‘Given the enormous affection many people have for ‘The Office,’ we have allowed the listing for Schrute Farms to remain on the site as a bit of fun for those who wish to leave a tribute review to the show.’

Others have been slower to let it go.

“Given the enormous affection many people have for “The Office,” we have allowed the listing for Schrute Farms to remain on the site as a bit of fun for those who wish to leave a tribute review to the show,” says Julie Cassetina of TripAdvisor. For those who aren’t in on the joke, she says, “We have clearly badged the listing to ensure travelers are aware that the property itself is fictional.”

The art of the funny review has grown in recent years, with users on Amazon and Yelp leaving reviews for such things as jails and gendered Bic pens. That TripAdvisor, in this case, allows the listing to remain displays a good sense of humor.

So do the beet farm’s “patrons,” whose absurd reviews aren’t always positive: 80 percent approve of the Honesdale, PA B&B.

“This was supposed to be like the farm from that episode of Portlandia,” wrote Jon B recently. “Disappointed! Wish I could find some way to get a refund.” Amanda D disagrees. “Beets staying anywhere else!” she writes, “Incredible value. Unbelievable service. Be sure to ask about the optional bedtime story – Dwight’s voice could lull the most weary soul into a peaceful night’s slumber.”

Mysteriously, some posts gain responses from multiple “managers” and “PR officers” of Schrute Farms – a quirk TripAdvisor couldn’t explain. While fans may like to speculate that folks associated with the show are responding, it is much more likely that fellow fans have registered to act as admins. Anyone can set up an account as an admin, as long they lie about their affiliation with the business and register through Facebook. “Dear Sir, Thank you for your gracious review of our property,” reads one such response.” We are so pleased that you had an enjoyable time. While your suggestion about the outhouse is a good one, we find that many of our guests prefer no locks on the outhouse door just in case one of our animal friends manage to sneak in.”

Schrute Farms, according to the series, is a beet and hemp farm selling to local markets. In fact, “The Farm” was also an abortive spinoff of the original show (its failed pilot appears in one episode of “The Office.”)

Part of the joke, it would seem, is on agritourism itself. Farm stays are now a vogue vacation choice, ranging from luxe to rustic. In this fictional world, difficult Dwight is a parody of the early-to-bed early-to-rise farmer, ill suited to having fussy guests on his land. Take, for instance, his strict rules regarding arrival and departure: Check in is 3:20 p.m., and no earlier, and check out is 5:15 p.m. and no later. King and queen beds are unavailable because Schrute Farms makes their own mattresses that do not conform to modern mattress sizes. Accommodations are offered for guests with special needs, dietary restrictions, or bedtime story requirements. And – unsurprisingly to those familiar with the character’s love for science fiction – Battlestar Galactica DVDS are readily available.

Popular
7 Smokable Plants You Can Grow That Aren’t MarijuanaBrian Barth
How to (Actually) Get Rid of Fruit FliesEmily Baron Cadloff
What to Do With an Abundance of PeppersShelby Vittek
6 Differences Between Llamas and AlpacasAndrew Amelinckx
Yes, the Government Really Does Stash Billions of Pounds of Cheese in...Emily Baron Cadloff
Explore Modern Farmer
Related
Environment, Plants
Making the Case for IntercroppingShea Swenson
MTMF
Meet the Modern Farmer Helping Immigrant Farmers Sell Their ProduceBridget Shirvell
Animals, MTMF
Paddleboarding Goats Make a Splash on Prince Edward IslandNoah Lederman
Plants
Rice Growers Continue to Battle Weedy EnemyLindsay Campbell
wpDiscuz
We use cookies on our website to give you the most relevant experience by remembering your preferences and repeat visits. By clicking “Accept”, you consent to the use of ALL the cookies.
Cookie settings ACCEPT
Privacy & Cookies Policy