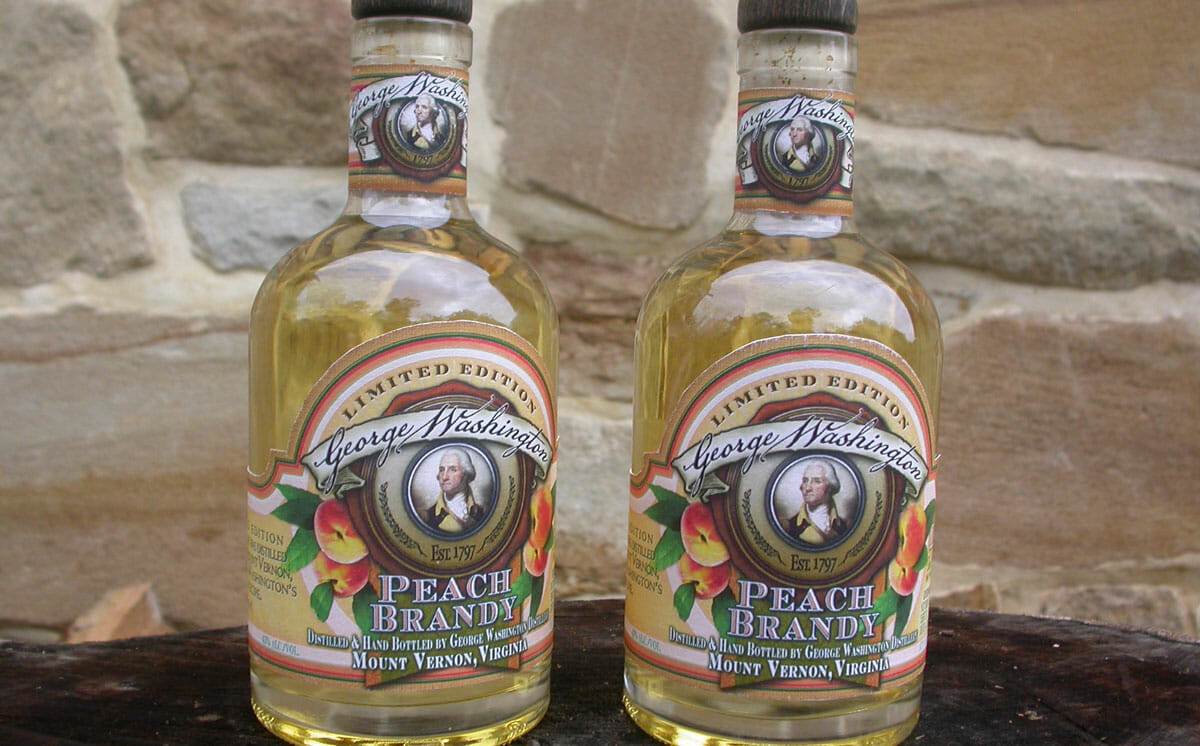 Washington became a commercial distiller at the encouragement of James Anderson, his Scottish plantation manager. In 1797, two years before his died, he set up what was primarily a whiskey distillery alongside his gristmill. (Since this is Modern Farmer, after all, it should be noted that Washington’s interest in distilling was partially motivated by farming.)

Washington was the only founding father who owned and operated a commercial distillery.

And pigs played a big part. As the website notes, the founding father was a hog farmer and he realized that a lot of the distillery waste could be fed to the pigs. He made a pen near the still for 150 or so swine.

For the first time in 200 years, the reconstructed distillery was used this year to once again distill peach brandy – 400 bottles of it to be exact. The question must be asked, why peach brandy?

“We knew from our distillery ledgers and other records in our collection that George Washington’s distillery did produce small amounts of peach brandy. Our goal was to produce all the products known to have been produced by Washington,” explains Steve Bashore, Manager, Historic Trades, Mount Vernon, by email.

To add to the significance of this distilling, Washington’s peach brandy was produced and sold in very limited quantities. Bashore shares that “The records indicate that some of the peach brandy was sold in the market, but most was sent over to the Mansion for use in entertaining guests at Mount Vernon.” It was reserved, so to speak, for Washington’s guests.

For the first time in 200 years, the reconstructed distillery was used this year to once again distill peach brandy.

To put the quantity of peach brandy in perspective, according to Mount Vernon’s website, “Washington oversaw the production of just 60 gallons of the popular spirit each year, compared to the 11,000 gallons of rye whiskey that he bottled and sold during the same time period.”

Washington’s exact recipe and instructions for distilling peach brandy are not known. However, this was not a problem. “The distillation of fruit brandy is pretty basic and has not changed much over the centuries, so lack of a recipe was not an impediment,” says Bashore.

“The peaches had to be prepared, crushed or pressed and then that resulting juice was laden with yeast and then allowed to ferment for 10 to 15 days. The resulting fermented juice was then double distilled to achieve our brandy at 80 proof. ”

Several craft distillers including Ted Huber of Startlight Distillery in Indiana, and Brian McKenzie and Thomas McKenzie of Finger Lakes Distilling in New York were instrumental in helping Mount Vernon.

The peach brandy was only sold in person, for one day, on April 1. But if you didn’t make it, do not worry. “This collaboration with the skilled brandy makers made this project a success and we learned a lot along the way which will help us in future production runs of brandy,” says Bashore.