Tobacco is one of the most reviled plants in the world. What if it could save millions of flu victims? 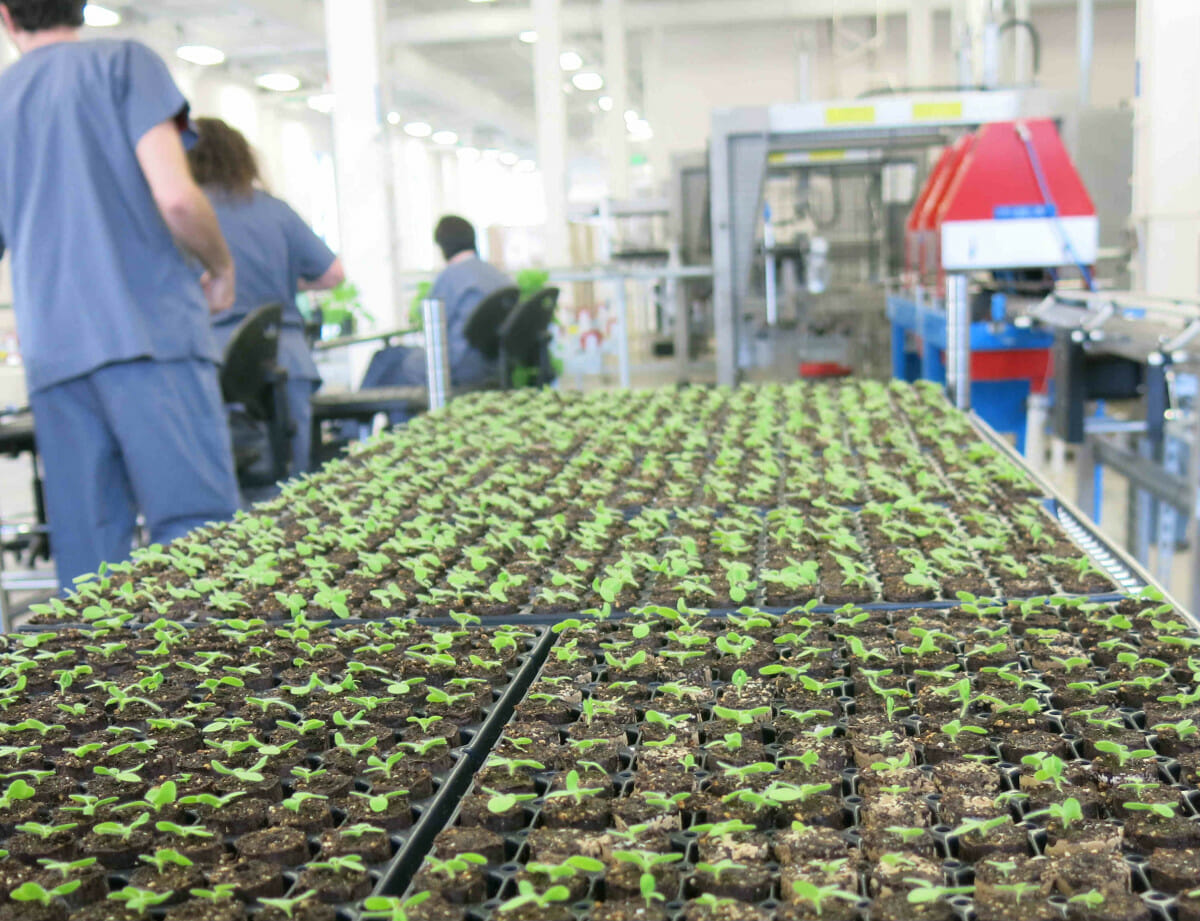 The $21 million was part of a DARPA program called Blue Angel, designed to overhaul instability in the vaccine supply chain. Frequent shortages are seen as a national security issue; the DOD wants soldiers healthy during an epidemic. Currently, vaccines are produced using an unwieldy process that dates back to the ’40s — injecting small bits of flu genes into a chicken egg and allowing them to grow. The current (and slow) production process takes five or six months.

Predicting how much vaccine to make is a yearly guessing game, as is devising the right strains of vaccine. Flu genes are constantly mutating; it doesn’t take long for a vaccine to become outdated.

Enter biotech firm Medicago, jointly owned by Philip Morris and Mitsubishi. This Quebec-based company owns a 97,000 square foot greenhouse in the heart of North Carolina tobacco country. More importantly, they own patents on a system for rapidly growing VLPs (virus-like particles) in plants.

‘I think people like the idea of creating something positive from a plant with such negative stigma.’

At the core of the process is Nicotiana benthamiana, a close cousin of Nicotiana tabacum, better known as smoking tobacco. This Australian plant is native to the desert and has historically been used as a stimulant (though it contains less nicotine than standard field tobacco). For the purposes of vaccine production, it has a couple of winning attributes — it is extremely robust and hearty, and it grows to maturity in just six weeks.

At the Medicago greenhouse, thousands of these plants are grown for about five weeks. Technicians then suck the air out of each plant with a vacuum while submerging them in a special inoculum solution. “Think of it like a sponge,” says Dave Henry, Medicago’s manufacturing director. “You start by pulling the air out. Then when the sponge is released it will suck in everything around it. It’s the same with the plant’s leaves.”

Once the solution is inside the plant, the VLPs spend a week growing. After a few days the plants’ leaves become mottled and discolored. According to Henry, it’s as if they’ve caught the flu. At the end of a week, the leaves are picked off each plant by hand for processing into a bulk vaccine.

Medicago has been tinkering with this process for 14 years, initially using transgenic alfalfa as the host plant. They shifted to tobacco upon realizing it grows quicker and produces much more protein than alfalfa. The tobacco plants are also naturally occurring — unlike the GM alfalfa previously used.

Henry says that so far, public reaction has been largely supportive. “I think people like the idea of creating something positive from a plant with such negative stigma,” he says. Of course, it helps that the vaccine extraction process leaves no residual nicotine. The new vaccines will even be vegan-friendly — some vegans currently avoid egg-based flu vaccines.

The CDC gave the DARPA-funded proof-of-concept a thumbs up and early clinical trials have shown positive results. Medicago is now in Phase 1 of FDA testing (small, focused trials on humans). So how soon will we be seeing these vaccines available commercially? Likely not until 2018 or 2019.

Anyone familiar with the FDA’s stringent drug review process knows it doesn’t happen overnight. And in this case, you’ve got powerful preventative medicine — often given to children and the elderly — coming from a plant containing nicotine. One imagines the agency will be taking every precaution.

But assuming it works out, Henry says this same process could be applied to any number of vaccines (e.g., rabies or rotavirus).

“We think this is going to forever change how vaccines are produced,” he says.