We Fought the Emus (and the Emus Won) - Modern Farmer
Animals, Lifestyle, Plants

We Fought the Emus (and the Emus Won)

In October of 1932, two Australian soldiers went to war. Their enemy: rampaging bands of emus. 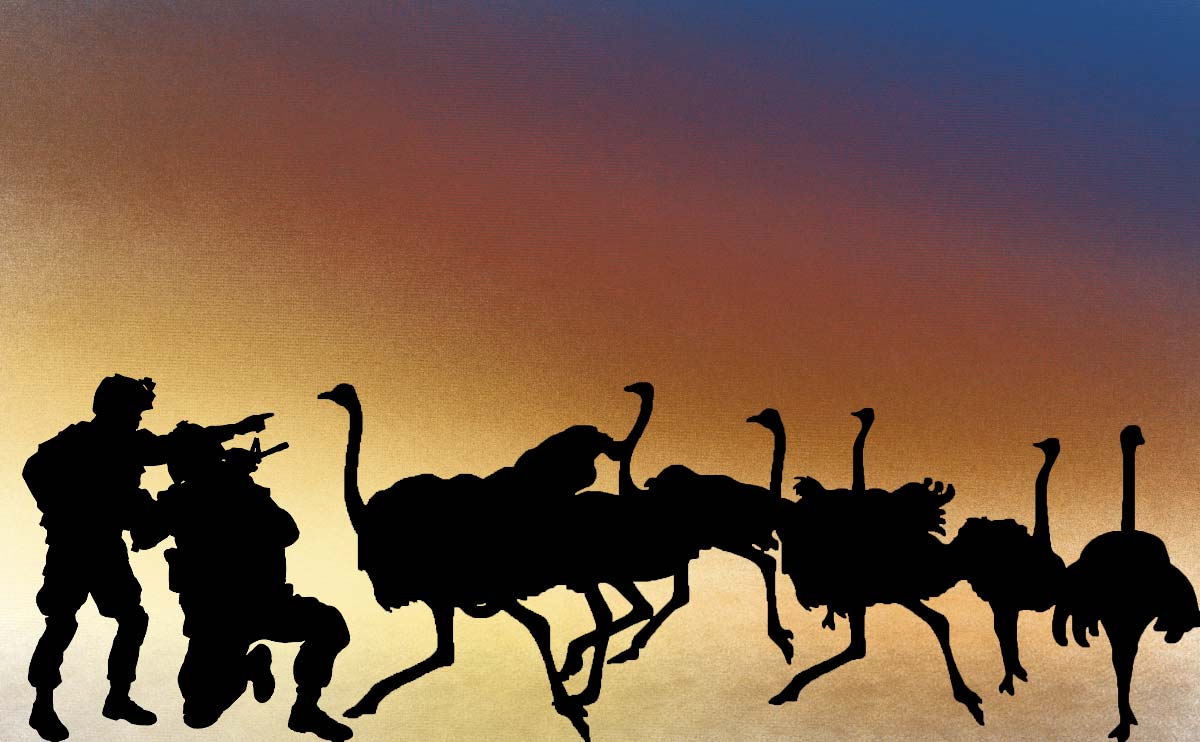 Emus, to be specific. After breeding season, Australia’s largest native bird migrated to the coast, but they were flightless, and noticed the road to Perth had been greatly improved.

The soldiers-turned-farmers disagreed. This aviary enemy was destroying valuable crops. Over 5,000 Australian and British veterans had set up farms in marginal areas of Western Australia after World War I, but the settlement program created its own kind of battlefield, and the tireless engagement hadn’t yielded much success. The Great Depression wasn’t helping matters, but the dawn of unemployment, deflation, poverty in 1929 also brought a significant promise from the government. Australia encouraged these farmers in Western Australia to increase wheat production in exchange for big subsidies. This came as the crop’s prices continued to plummet, but the subsidies never did. The only thing that arrived ahead of harvest were the emus.

Wheat prices continued to plummet, but the subsidies never did. The only thing that arrived ahead of harvest were the emus.

The region sent representatives to Canberra, the capital in the north, but they hardly bothered with the Department of Agriculture. They took their concerns to Sir George Pearce, the Minister of Defense. The 5-to-6 feet tall emus were not only eating their crops, they complained, but they created large gaps in the fences that surrounded the farms. The fences had originally been built to bar Australian’s most invasive species, the rabbit, from devouring the crops. (By 1859, two million rabbits were being shot or trapped each year, but the deaths had a negligent effect on the population.) The emus allowed thousands of rabbits to gain easy access to crops, rendering the animal ravaging near complete.

Sir Pearce agreed the problem would have to be dealt with, but money was tight. He would deploy the two soldiers under the command of Major G.P.W. Meredith of the Seventh Heavy Battery of the Royal Australian Artillery, and pay for their transport, but the farms would have to provide the military personnel with food, accommodation and those ten thousand rounds of ammunition. He also sent a Fox Movietone cinematographer along, recognizing an opportunity to show the rest of the country how hard the government was working to better the lives of all Australians during the Great Depression.

The soldiers had 1,000 emus in plain sight, but a gun jammed after killing twelve emus, while the rest went into hiding.

The trio arrived ready to decimate the interloping emus, but then the rain came, and the birds scattered. For a month, the military personnel waited in the homes of struggling farmers, who were obligated to share their scarce supplies. By the time the much needed rain ceased to fall on November 2, only 50 emus were spotted. An eager local population tried to help with an ambush, but the emus, which can run up to 40 miles per hour, once again scattered. Two days later, the soldiers had 1,000 emus in plain sight, but a gun jammed after killing twelve emus, while the rest went into hiding.

The emus seemed to quickly decipher the gun’s range, and the majority of birds escaped ensuing confrontations with their lives intact. The soldiers and locals tried a different tack. For days, they laid in wait, and when that proved unsuccessful, they descended in droves. They tried mounting the guns to trucks and rooftops with little success. Six days after the first emu fell, 2,500 rounds had been fired. Estimated death rates range from 50 to 500, a number which did not escape the local media. The negative attention reached the Australian House of Representatives who, on November 8, told the military personnel to withdrawal.

‘If we had a military division with the bullet-carrying capacity of these birds, it would face any army in the world. They could face machine guns with the invulnerability of tanks.’

“If we had a military division with the bullet-carrying capacity of these birds, it would face any army in the world,” Major Meredith explained. “They could face machine guns with the invulnerability of tanks. They are like Zulus, whom even dum dum bullets would not stop.”

The birds had won, and the violence had left them undeterred. They resumed their feast, their brazen pursuit of crops amplified by the unlucky combination of hot weather and drought. The farmers once again implored the government, and this time, James Mitchell, the Premier of Western Australia, supported their proposal.

There would be a second round. From November 13 to December 10, 1932, the emus were once again under attack, losing around 100 birds per week. In the end, Major Meredith claimed 9,860 rounds of ammunition had killed 986 emus. Another 2,500 had been badly injured, and would eventually succumb to their wounds.

Word of the Emu War, as it was being called in the papers, reached conservationists in Great Britain, who decried the extermination of a rare bird. By the time the military was accused of “mass destruction,” the government had had enough of the farmers of Western Australia and their problems, veterans or not. When they asked for additional assistance in 1934, 1943, and 1948, they were told machine guns were no longer an option. Bounty hunting, however, was perfectly acceptable – as was devouring the kill.

But in the end, no gun, machine or otherwise, scared away the emu — just simple scarcity. When the wheat was harvested, the emu moved on. Today, the birds are still considered a good dinner, and their oil, feathers, and leather a commodity.