Wrap Yourself in Wet, Fermented Hay 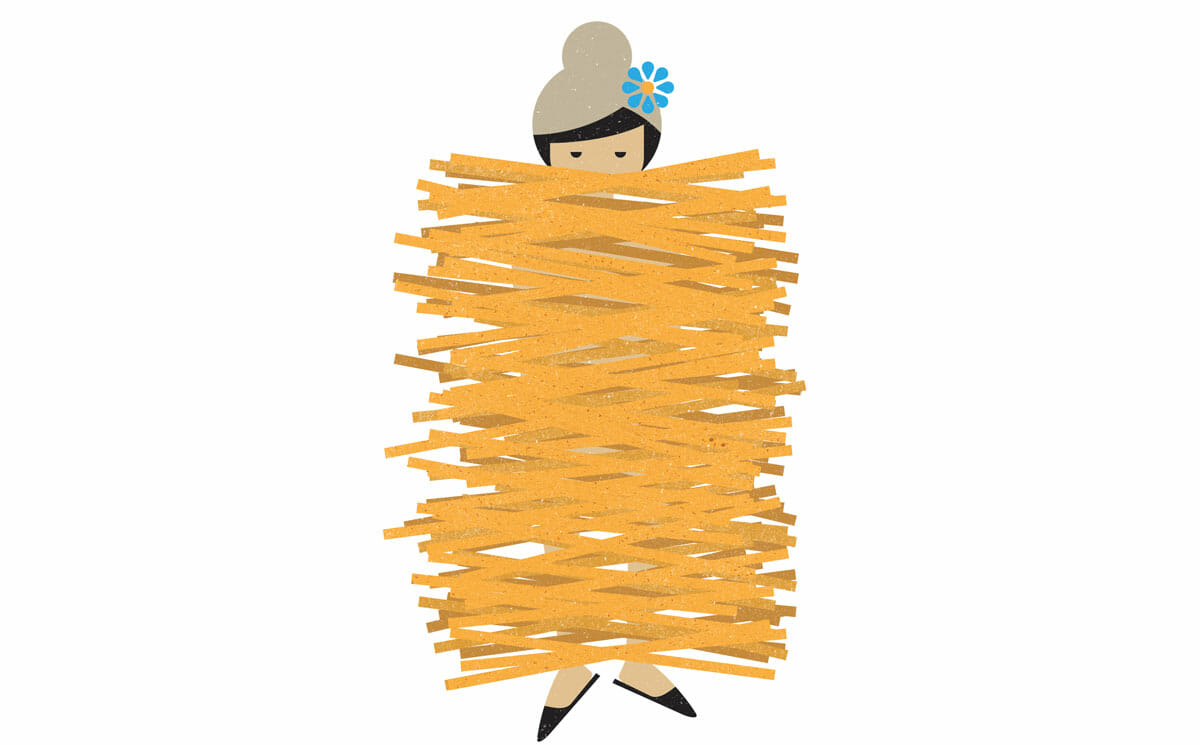 Hotel Heubad‘s David Kompatscher says his family has provided this treatment for well over 100 years, after discovering that local farmers who slept in hay would awake “ï¬t and full of energy.” Mind you, this isn’t just garden-variety peasant hay — it’s made up of leaf plants like lady’s mantle, noble herbs, arnica, valerian, couch grass, ryegrass and fescue. And the rarified soil it’s grown in? Petrified coral reefs, high in the Dolomite mountains. No wonder the hay is so “fatty” (an affectionate descriptor used on the hotel’s website). 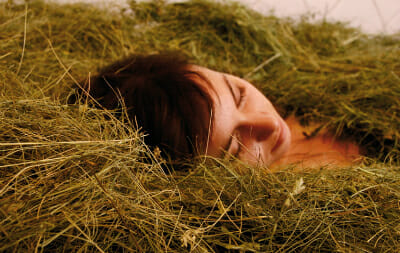 Sail away on a bed of wet, fermented hay.

Over time, hay baths acquired mythic healing properties, largely ascribed to essential oils in the Alpine grasses. The treatment is now touted as a cure-all for whatever ails you – Kompatscher’s father takes regular hay baths to combat obesity, while his mother uses them for rheumatoid arthritis. And that’s just the beginning. According to the hotel, hip and back pains, stiff necks, muscle contractions, muscle cramps, neuritis, sciatica, synovitis and stiff joints could all be improved with regular hay treatments.

There have been no comprehensive studies on these benefits — the claims are based on anecdotal evidence stretching back to 1871 (the hotel claims hay baths are probably even older than this). Several years ago, the treatment suffered a major setback, when regulators no longer allowed Heubad to bill the baths as a “cure treatment.” The hotel has been fighting this downgrade ever since, to no avail.

But even if it doesn’t cure all your ills, does a hay bath feel nice? Here’s how it works: The hay is soaked in hot water, roughly 105 degrees. The spa-goer is wrapped tightly in this hot, wet grass for 15 to 20 minutes. Then there is a meditative comedown period, where you are wrapped in linen sheets, pores still glossy with essential oils. 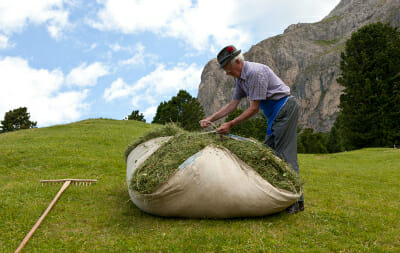 This is a mellower version of yesteryear’s hay baths, where the hay got up to 140 degrees, the treatment lasted 40 minutes, and an attendant was on hand to brush away flies and mop up your sweat (there was plenty). One upside of the old-school version — they used to give you wine right after your hay bath. That has gone by the wayside: Apparently booze dehydrates you, not ideal after sweating out so many liquids.

British travel writer Adrian Bridge tried a Heubad hay bath in 2008 — it didn’t go well. He complained that the fermented hay had a funky odor, and that the procedure itself was “excruciating” and “itchy.” Bridge suspected there might be bugs in the hay and was not psyched that you don’t get a post-bath shower. All told, the writer “decided that there’s a lot to be said for fluffy towels and soothing aromatic oils.”

Of course, there are clearly two camps on the joys and benefits of hay baths. According to Kompatscher, “It is really a wonderful experience. It detoxiï¬es your body, like a sauna, and makes your skin so nice.” So who are you going to believe?

Popular
The Future of Hay Drying in AmericaLindsay Campbell
How to (Actually) Get Rid of Fruit FliesEmily Baron Cadloff
7 Smokable Plants You Can Grow That Aren’t MarijuanaBrian Barth
6 Differences Between Llamas and AlpacasAndrew Amelinckx
How to Get Rid of Spotted LanternfliesShelby Vittek
Explore Modern Farmer
Related
Food & Drink, Labor
The Chocolate Companies Working to Uproot Unfair Labor PracticesEmily Baron Cadloff
Cookbooks, Food & Drink
7 New Cookbooks We’re Cozying Up With This FallShelby Vittek
Food & Drink, How-To
6 Ways to Preserve Your HerbsLindsay Campbell
Food & Drink, Immigration
So Much For Eating LocalEmily Baron Cadloff
wpDiscuz
We use cookies on our website to give you the most relevant experience by remembering your preferences and repeat visits. By clicking “Accept”, you consent to the use of ALL the cookies.
Cookie settings ACCEPT
Privacy & Cookies Policy