Destroyed by Fertilizer, A Tiny Island Tries to Replant

Phosphate mining for fertilizer gave the tiny nation of Nauru the highest GDP per capita in the '70s. But with phosphate tapped out, an economy on the rocks and a population addicted to imported fast food, can the tiny nation learn to grow again? 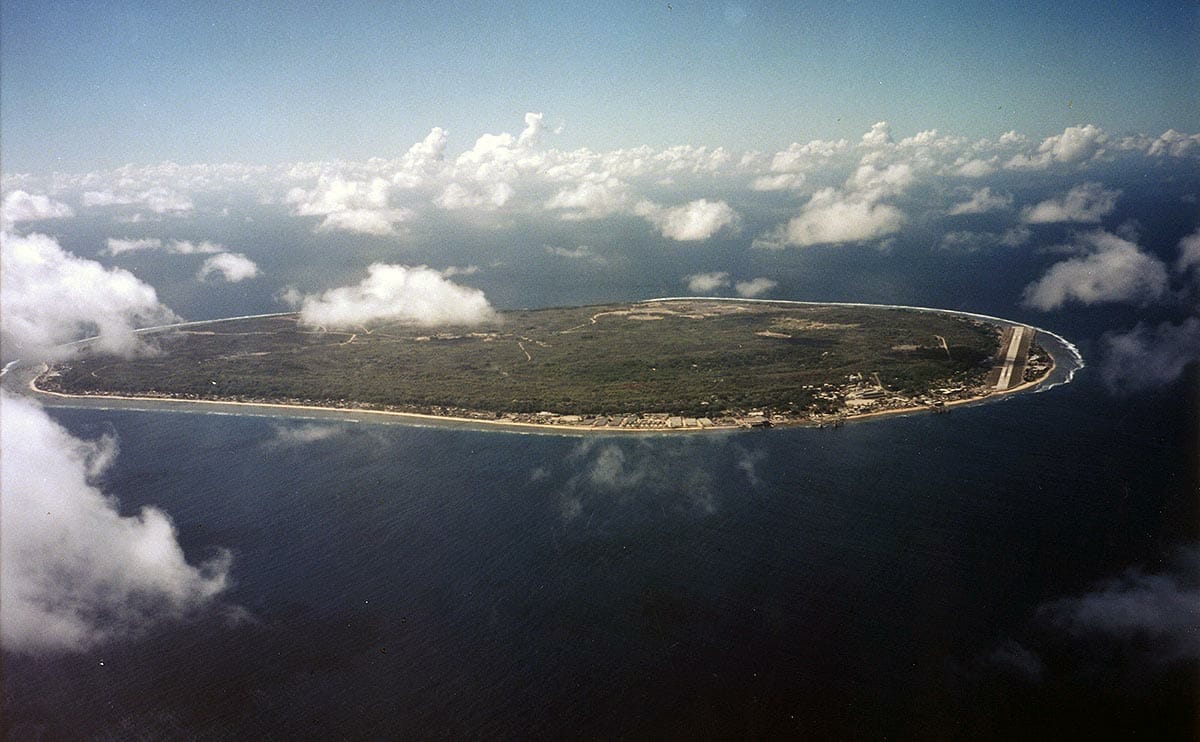 In the film’s final scene Nauru’s future first president, Hammer DeRoburt, delivers a prediction as remarkable for its matter-of-fact tone as for its eerie prescience: in 30 to 40 years, he states, Nauruans’ high standard of living would nosedive, in line with the exhaustion of its only exported resource — rich phosphate derived from centuries’ worth of fossilized marine life and seabird guano.

Most likely, DeRoburt nonchalantly suggests, the entire population would vacate the island and resettle elsewhere. “The final choice,” an anonymous narrator concludes, “will lie with the Nauruans … their prospects are bright; their future is secure.”

The phosphate vanished roughly on schedule in the early 2000s. But Nauruans remain, living mainly on the coast of a South Pacific island easily circled in a 20-minute drive. The great irony of the world’s smallest republic (population: 9,378), whose sole resource granted it the second highest per-capita GDP globally in the 1970s, is that in the process of mining phosphate to fertilize fields in faraway places, it rendered its own landscape largely infertile.

Over much of the island, uneven coral-limestone pinnacles – all that remained after phosphate deposits were scooped out between them – rise from the ground like petrified sandcastles. After the mining industry evaporated, bad government investments left Nauru so broke it resorted to detaining Australia’s ousted asylum seekers for money.

With all these difficulties in mind, U.N. consultant Haniteli Fa’anunu, former agriculture director for Tonga, flew to Nauru in May 2012 to unearth any farming possibilities that might still exist. He isn’t the first to scout out planting prospects on the island, but he may bring the most encyclopedic knowledge of South Pacific flora; back on Tonga, he’s spent most of his life building a massive organic botanical garden, which features almost every species of Tongan plant alongside hundreds of others.

One of Fa’anunu’s goals was to size up the progress of past farming efforts, like a project sponsored by Taiwan that’s been working with locals since 2009 to grow vegetables including cabbages and tomatoes and sell them at a weekly market. The project, which ends this year, uses high-tech methods – backhoes, a desalinization plant – and some of its vegetables are hybrid, non-native varieties that may suffer during the three-year-long droughts that can pummel Nauru during La Niña cycles. Participants in the Taiwan Technical Mission are mostly landowners, not Nauru’s poorest families. According to Fa’anunu, for the most vulnerable Nauruans to dig out of their current situation, they’ll need hand tools, not backhoes, and lessons on how to use them.

Nauru: The Island in the Center of Everything

Another casualty of the mining years is Nauruans’ connection to their own landscape, their ability to use the native plants whose roots still cling stubbornly to the sandy soil. As Fa’anunu describes it, mangoes and a spiny-skinned fruit called soursop are left to rot on the ground, while free-roaming chickens, another potential food source, are either recruited for cockfights or sold to the Chinese restaurants that materialized with imported laborers during the phosphate boom. “The trees are there,” Fa’anunu says, “It’s a matter of getting the people to see them.”

It also went from a population of fishers and foragers to a people almost entirely reliant on imported fast food. More than 70 percent of Nauruans are obese, with 10 percent suffering from Type 2 diabetes, and the road back to healthful eating is littered with obstructions.

Fa’anunu’s recommendations for improving Nauruans’ nutrition are less about large-scale farming and more about edible gardening, and encouraging young people to eat plants. He’d like to see agricultural extension officers teaching families how to prune the backyard breadfruit trees he noticed on his visit, so the branches reach low enough for kids to pluck breakfast on their way to school. He wants more women in the department who can teach local households how to cook the hibiscus-leaf spinach that grows wild on the island. In his ideal scenario, most new plantings would be native or local varieties – the types of vegetation that sustained Nauru for 3,000 years before Europeans arrived to pounce on its phosphate supply – plants like drought-resistant, vitamin A-rich pandanus or protein-packed tropical almond.

Almost two years after Fa’anunu’s visit, plans are finally moving forward. Viliami Fakava, Plant Production and Protection Officer for the U.N. Food and Agriculture Organization’s Sub-regional Office for the Pacific Islands, says the FAO will implement many of Fa’anunu’s recommendations in the next two years. Though the project awaits Nauruan government approval, Fakava anticipates a launch meeting by May or June 2014. Meant as a more accessible compliment to the Taiwan Technical Mission, this latest effort aims to promote backyard gardening.

Households, including non-landowning ones, will choose from a list of fruits and vegetables to plant, which they’ll receive for free along with training in fruit tree maintenance and composting.

Whether subsistence gardening will take is an open question; currently, the island is also exploring secondary mining, scratching at the wasted pinnacles hoping to squeeze shit from stone. And this time – after decades of exploitation by foreign powers, 46 years as a sovereign nation and some severely screwed-up episodes of money management – the choice of how to face the future may truly belong to Nauru.