Reviving a lost tradition in the Northeast: growing grain. 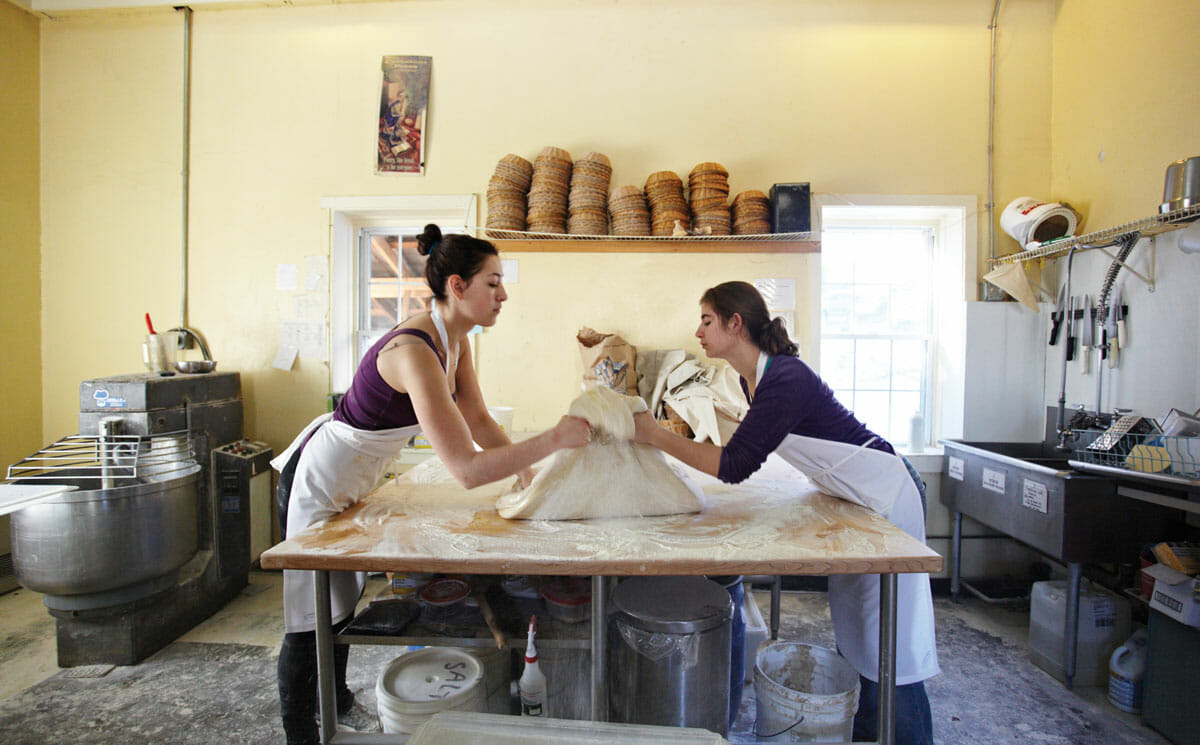 Jonathan Stevens wants to know the farmers who grow his food. So when he and his partner, Cheryl Maffie, opened Hungry Ghost Bread, an unassuming bakery in Northampton, Massachusetts, in 2004, they decided to source many of their ingredients locally. This included most of the fruits and vegetables used in their pastries and also their staple ingredient, the foundation of every loaf of whole-grain bread to emerge from their wood-fired oven: the flour.

That’s where the couple ran into trouble. To get local flour, they needed to find local farmers growing grain. But who grows grain in cold, wet New England?

Not many, they soon discovered. When he called the Massachusetts Department of Agricultural Resources for help, he says, the person on the other end of the line just laughed.

But Stevens and Maffie pushed on, undeterred. Flour – especially freshly milled flour made with whole grains – can have a startlingly robust flavor. And despite the fact that many Americans eat bread every single day, it can have a flavor that few have experienced. “The problem with most bread is that you can’t taste the flour,” he says. “Most bread doesn’t taste like anything.”

A group of farmers and bakers are once again growing grain in the Northeast and using it to bake breads with vibrant flavor. Here, scenes from Hungry Ghost Bread in Northampton, Massachusetts.

Today, Stevens is part of a vibrant group of bakers, millers and farmers in America’s Northeast, helping to revive a lost tradition – grain grown locally, milled locally, used by local bakers to create whole-wheat breads that taste like the bread eaten by our grandparents, before the advent of highly processed flours that can sit on grocery store shelves for months on end. “Seemingly every single thing that comes out of James Beard Award”“semifinalist baker Jonathan Stevens’s wood-fired ovens elevates the humble carbohydrate,” wrote Helen Rosner in Saveur in 2011.

Stevens and Maffie were initially inspired by a group of farmers and bakers in southwest France fighting E.U. regulations with the aim of growing and using ancient varieties of grain themselves. And they aren’t alone. In Denmark, Claus Meyer, co-owner of Noma, has worked tirelessly to revive the use of local heritage grains. In Northern California, Oakland’s Community Grains uses local wheat to make pasta. Chad Robertson of San Francisco’s Tartine Bakery experiments with bread made from local heirloom grains.

“The problem with most bread is that you can’t taste the flour. Most bread doesn’t taste like anything.”

Bread’s flavor has to do with many things: the ratios in the recipe, the timing and nature of fermentation, the presence or absence of fat and salt. But mainly it has to do with the type and quality of the flour. “The great virtue of using local grain for flour is that you get a superior flavor, one you can’t get with commercial whole-grain flour,” says Jeffrey Hamelman, certified master baker and head of the King Arthur Flour Bakery in Norwich, Vermont, where he often chooses to use local flours in production. “Commercial flour has been sitting around for some time. With white flour, that can be a good thing. But for whole grain, the aromatic components that make up the flavor start oxidizing. This means the germ can go rancid and produce off-flavors.”

In 2008, Stevens and Maffie organized meetings with farmers to convince them to start growing grain.

At first, it was a hard sell.

While grain was once an important crop in the Northeast, today the vast majority of grain is grown in the more weather-dependable West or Great Plains. Many farmers working elsewhere lack the knowledge base, machinery and infrastructure to make new grain crops work. Additionally, the profit margin can be low. Stevens and Maffie started by planting their own patches of wheat and rye on the bakery’s front lawn. When they convinced around 150 of the bakery’s customers to plant wheat of their own – an act covered on CNN – people began to take notice. “Even farmers aren’t immune to hype,” says Stevens. “And then all of a sudden there were three or four farmers that said, ‘Okay, let’s give it a try.’ ”

Gene L’Etoile was one such farmer. L’Etoile has been farming at Four Star Farms in Northfield, Massachusetts, for 27 years, but only began growing his now-100 acres of grain in 2008. His two sons had joined him at the farm, and diversifying was necessary to sustain the additional family members.

There was a steep learning curve for L’Etoile – who currently provides Hungry Ghost with whole-wheat, rye, spelt, corn, triticale, buckwheat and bolted wheat flour – especially when it came to mastering the delicate process of harvesting, cleaning, drying and storing the grains, all of which must take place with precise care and equipment in a very short time span.

Farmers hoping to sell their grain as flour often have their crops tested after harvest for safety. FDA guidelines stipulate that more than 1 ppm of the mycotoxin called deoxynivalenol (DON) means the grain is unfit for human consumption. Grain is also tested for the “falling number” of wheat, which is a method to determine sprout damage and imperative for making bread-quality flour.

“The smallest part of the battle is getting the land, getting the seed and getting it to come up,” says Peter Martens, whose family has farmed assorted grain crops in Penn Yan, New York, since 1957. “The hardest part is getting it to the quality [fit for human consumption].”

Even experienced, successful farmers switching over to grain may have a hard time. Ken Migliorelli, a third-generation farmer in the Hudson Valley who grows more than 130 different fruits and vegetables, stepped into the grain game three years ago. And because he just hasn’t been able to meet the testing standards, he’s had to sell the result for animal feed every year since. Last year he was close: His grain tested at 1.2 ppm of the mycotoxin DON. “I need to get better at cleaning the grain,” he says.

It helps that New York distilleries and breweries provide another avenue for local grain income: In 2007, the State Liquor Authority introduced a farm license, allowing farm distilleries that use 75 percent New York grain to sell alcohol directly to consumers, therefore upping the demand for locally grown grain. Joel Elder, chief distiller at Tuthilltown Spirits in Gardiner, New York, uses local grains to make a handful of spirits. He does this in part to support the local economy, but he also does it for the flavor. Local grains, especially the heirloom varieties, can be incredibly rich, and when he uses them in bourbon, Elder says, “there is this deep buttered-popcorn aroma, a richer mouthfeel.” 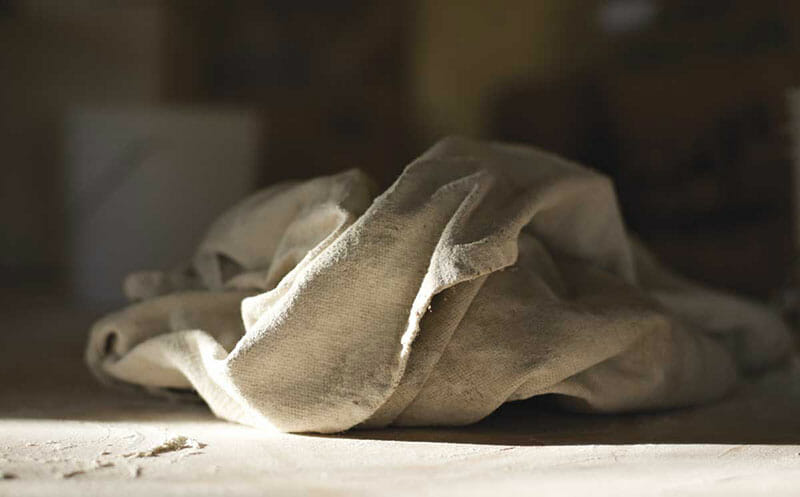 A cloth used to cover bread dough as it rises overnight.

There is an element of uncertainty for all who use local grains. The levels of moisture and protein change from variety to variety, and also depend on the quality of drying and storage. “What’s required is a baker being able to make adjustments based on the needs of the flour,” says master baker Hamelman. “It’s not all that different than having several children; you don’t treat them all the same.”

But for Stevens, that’s part of the pleasure. “If you’re a craft person, you know that your material can change.”

As customers file into Hungry Ghost Bread on a Wednesday in December, greeted by the smell of fresh-baked spelt bread, they seem to care less about the exact provenance than making sure they get a loaf before the day’s supply runs out.

Stevens pauses to pull more finished loaves of bread out of the oven on a long wooden paddle. “Local grain? It’s not brain surgery,” he says. “Growing it. Working with it. I really urge people to push for it. I hope that it can last.”