Is This Asian Tree a New Hope for Florida’s Citrus Growers?

As Florida's citrus growers struggle with a deadly news citrus disease, relief may come in the form of the pongam tree. 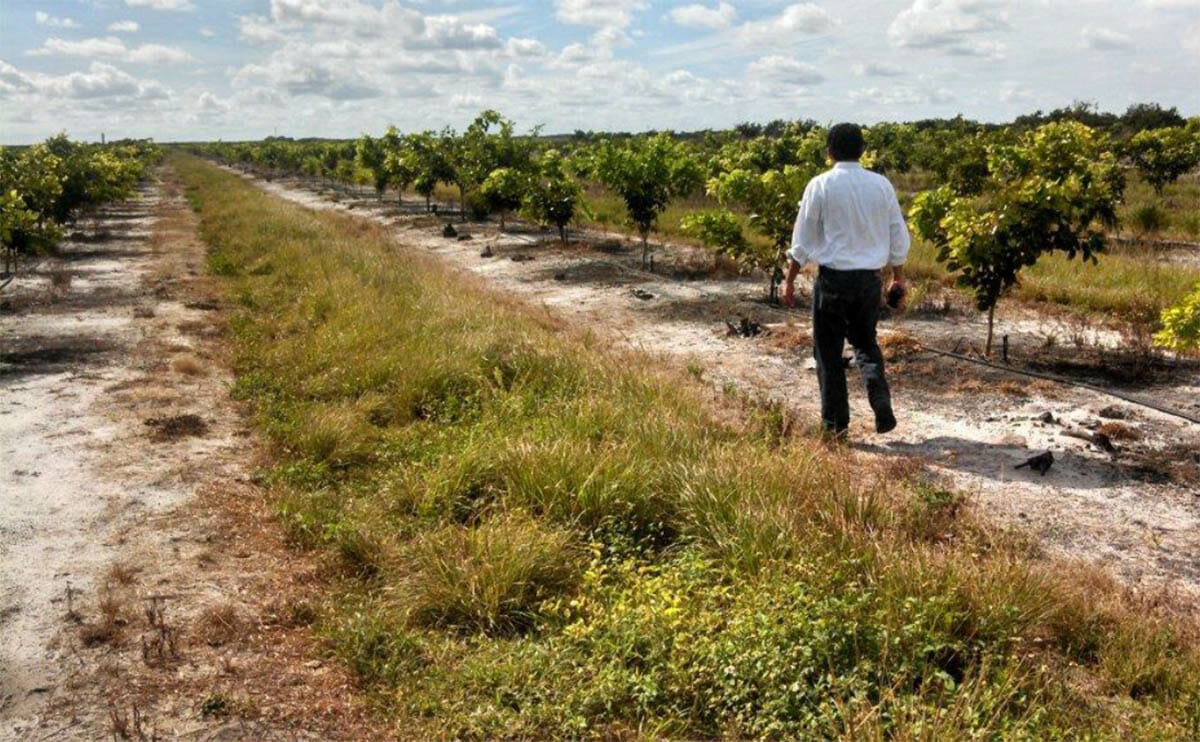 It’s not that citrus farmers would choose such a future for their orange groves — they just might not have a better option. Citrus greening disease, also known as huanglongbing or HLB, may have Florida’s limes, grapefruit and oranges headed for near extinction. The state’s output has dropped from about 30 million field boxes in 2000 to about 15 million boxes in 2013-14. Researchers at the USDA estimate up to 70 percent of the state’s citrus trees could now be infected.

Peter McClure, the Agriculture Research Manager at one of Florida’s largest citrus operations, thinks the state might not have to wait for aphid-like phyllis flies to touch every tree with deadly bacteria. “If we go further, we will reach the threshold where we can’t feed [citrus processing] plants and they will just go away,” he said.

Farmers who haven’t already sold their orchards to developers are looking for ways to hedge their bets. In an extensive report on the disease published last year, the Huffington Post outlined a laundry list of alternatives for Florida’s estimated 525,000 acres of citrus in 2013 — down from a peak 858,000 acres in 1996.

Citrus researcher Bill Castle has identified a few varieties of pomegranates that could succeed in Florida. Others have floated the idea of peaches, blueberries, pineapples and olives, but each alternative has its limits. Pineapples freeze at the smallest drop in temperature below 28 degrees Fahrenheit. Little infrastructure exists for olive pressing or pomegranate juicing. And even if a small portion of Florida citrus farmers transitioned their acreage to peaches or blueberries, such massive production could drop prices to the point where farmers couldn’t recover a profit.

McClure has turned to Oakland company Terviva Inc. for what he thinks could be a better idea: pongamia pinnata, better known as pongamia.

A native of Australia and India, the pongamia tree is already no stranger to Florida. Since it was brought to the state in the 1920s, bright lavender blooms have added some color to front yards and parks on the southern, east and west coasts of the state. The tree is so fitted for the environment that it has a habit of showing up in the vacant lots and backyards of Miami (indeed, some, including Miami-Dade country, label it an invasive species).

Terviva and Florida citrus growers don’t mind evergreen shade or the blossoms’ “pea-like fragrance,” but it is the tree’s seed pods that have their attention.

Inside each one is an oil-rich legume. Each season, an acre of mature pongamia trees can produce about 10 times as much oil as an acre of soy beans. The liquid can then be turned into bio-fuel or higher-value products like lubricants and natural pesticides. The seed cake has also been used as an high-protein animal feed in India.

Unlike their some other alternatives, citrus farmers could use their existing field architecture for the pongamia. Farmers like McClure wouldn’t need to raze the beds that once rooted orange or grape fruit trees because pongam trees thrive in the same sandy soil.

In addition, Schenk claims the trees are incredibly low-maintenance once they’ve been established. The trees fix nitrogen, so they need little to no fertilizer and actually encourage grass growth, which could help farmers graze livestock between the orchard rows. A deep tap root makes them drought-resistance. And because the oil works as a natural pesticide, bugs and bacteria have a hard time messing with the early-summer harvest — a huge advantage when other Florida growers have come under environmental scrutiny for contaminating water runoff.

“In no field — in Hawaii, Texas or Florida — have we had to use any pesticide,” said Schenk. Terviva has its largest test grove near Port Lavaca, Texas, where it grows 160 acres of pongamia trees.

‘Basically, we are domesticating a wild tree. But there is no short cut to that other than having mother trees that have been observed, documented, measured and tested’

Even as Australia’s University of Queensland has shared Schenk’s enthusiasm for pongamia as a contributor to biofuel feed stock, some skeptics are holding out. In a 2011 news analysis from Reuters, officials from around the biofuel industry all note the tree as a promising option, but urge caution to investors until companies like Terviva can prove it on an industrial scale.

Schenk understands the challenge. His company has been scouring India and Australia for the best trees and improving the genetics at test facilities. “Basically, we are domesticating a wild tree. But there is no short cut to that other than having mother trees that have been observed, documented, measured and tested,” he said.

In the meantime, citrus growers in Florida like McClure might not have much time to wait for verified proof. They are already Terviva’s largest set of customers.

“Sure, it’s experimental now, but it has a lot of potential,” said McClure.