The potato is the world's third largest food source, behind rice and wheat, and a staple for more than a billion people. And Peru's International Potato Center is working hard to make sure that potatoes stay with us. 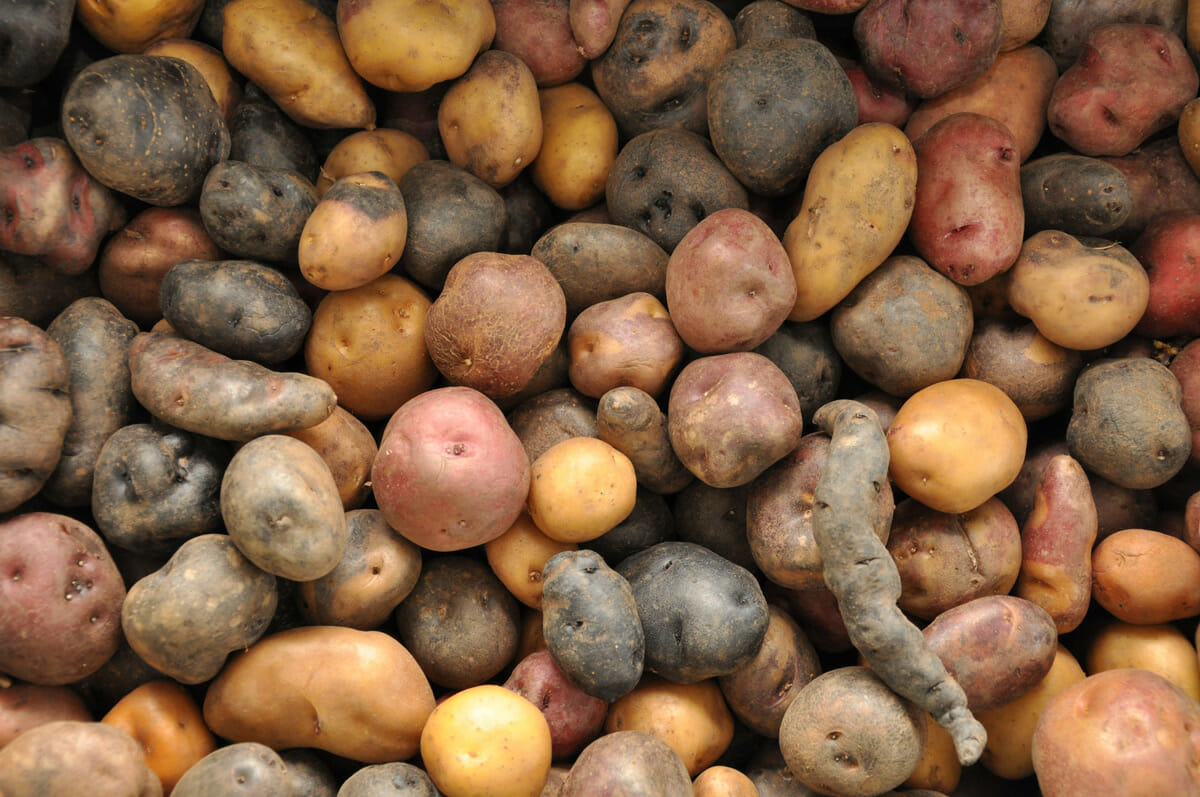 The humble spud is the world’s third largest food source, behind rice and wheat, and a staple for more than a billion people. It’s a wonder there aren’t more centers erected in its honor.

El Centro Internacional de la Papa (the International Potato Center – CIP) was founded in 1971 and is part of the Consortium of International Agricultural Research Centers, a global non-profit group that works towards food security on behalf of poor people in developing countries. The other centers, located across the world, include research dedicated to rice, fish, livestock and forestry.

CIP is home to the world’s largest in vitro gene bank, a library as such, made up of thousands of tiny test tubes containing live tissue cultures – each a miniature potato, sweet potato or tuber plant.

Think “potato” and the lay-consumer sees the brown, lumpy variety. But CIP’s gene bank is home to 2,400 wild and 4,700 native Andean potato varieties. Yes, there are shades of brown, but some are brightly colored in yellow, red and purple hues. Some are small and round and others are awkwardly shaped like a knob of ginger. Many are only sold at local markets or within Andean countries. Some of the usual varieties are Papa Purpura (Purple Potato), Papa Negra (Black Potato), and Papa Peruanita, Papa Canchan and Papa Huamantanga that are named after local regions.

In the CIP laboratories, scientists work with cutting-edge genetic enhancement technology to redevelop these existing varieties into uber tubers. This new generation of potatoes are climate and disease resistant breeds designed for farmers in developing countries to produce sustainable, nutritious and profitable crops. And CIP gives its research away to developing country farmers and researchers, completely free of charge. Any interested farmer can get in touch with the center and request a variety for planting. Buyer pays postage, that’s all.

CIP distributes its living samples and seed collections via a straightforward online ordering form. They collaborate with breeding programs in over 100 countries to ensure new varieties are distributed freely to farmers through local agricultural programs.

CIP’s Senior Potato Breeder and Head of the Global Program of Genetics and Crop Improvement is Dr. Meredith Bonierbale. She explains how poor farmers in developing countries are hugely disadvantaged by a lack of access to new agricultural technologies. By sharing its research freely, CIP is working to change that.

“Our focus at CIP is dedicated agricultural research and food security for the poor. We want to have our materials available in the public domain ”“ that’s our main objective,” she says.

Poor farmers can spend all their funds on natural resource inputs such as pesticides, water, fertilizers and imported seeds. The costs are often too high to break the cycle of poverty.

CIP’s gene research aims to sidestep those stumbling blocks by providing crops that are disease and drought resistant, with additional nutritional content, that can be farmed intensively.

“We’re trying to give the farmer, or the variety itself, the advantage to be productive using less inputs,” explains Bonierbale. “We try to produce varieties that have resistant characteristics and also a yield stability so that as the climate varies from year to year, the yield remains reliable without the farmer needing a lot of extra inputs.”

It’s a win-win for the grower, as Kaisse Adam, a potato farmer in Mozambique, can attest. Adam was given potato seeds through a joint CIP project funded by the US government’s Feed the Future program. When Adam harvested his first crop in 2011, he was astonished by a yield seven times bigger than usual. With his newfound wealth, he bought a motorcycle, finished building his house and started a seed-selling business.

Not just a bland, stodgy vegetable requiring a deep fryer and lots of salt, potatoes are high in iron, zinc and vitamin C, and sweet potatoes in beta-carotene, which produces vitamin A. These are hugely important characteristics for millions of people in developing countries.

Far from a bland, stodgy vegetable requiring a deep fryer and lots of salt, potatoes are high in iron, zinc and vitamin C, and sweet potatoes in beta-carotene, which produces vitamin A.

“Iron and zinc deficiencies, as well as vitamin A, are the world’s most prevalent causes of malnutrition,” says Bonierbale, “so we work with bio-fortification to increase the micronutrients.”

They have already had “the biggest opportunity and the biggest success” introducing fortified varieties of orange flesh sweet potatoes in Africa. With an estimated 43 million African children suffering from vitamin A deficiencies (which can lead to blindness, disease and even death), it is an ongoing and essential project.

CIP is also trying to diversify diets in regions where tubers are not typically grown and consumed.

“In Asia, for example, diets are generally very dependent on cereals such as rice and wheat. We think that potatoes could offer both income opportunities to farmers growing cereals, and also help to diversify the food system,” says Bonierbale.

In order to do that, CIP wants to shorten the growth cycle of the potato crop.

“We call it the ‘precocious habit of the potato’, one that can mature in 70, 80, or 90 days instead of 100 days, and be planted between rice crops,” says Bonierbale. “Then farmers will have an additional income crop and a diet high in iron and zinc.”

These flavorful varieties, genetically enhanced through selective breeding, also look and taste different from the white and yellow potatoes with a bland, dry texture that many farmers are used to. One of CIP’s biggest challenges is convincing farmers and consumers to try the new varieties. CIP scientists are also tinkering with the genetics to make the new varieties more palatable to people’s taste preferences

Fickle palates aside, interest is building.

“Here in Peru, people are aware of our breeding program, and organizations and farmers are already starting to request these bio-fortified potato varieties, before they’re even at the final stages of breeding,” says Bonierbale.

The humble spud has gotten a makeover and it’s going places.

Pictured Above: A sampling of the richly colored varieties of potatoes at the International Potato Center in Lima, Peru. / Cary Fowler/Global Crop Diversity Trust

Correction: A previous version of this article states that “most” of the Andean potatoes are of the colorful variety. In fact, the colored trait is moderately rare, only about ten per cent of the 4,700 native Andean varieties. We regret the error.

Popular
7 Smokable Plants You Can Grow That Aren’t MarijuanaBrian Barth
Alaskan Salmon Face a Stream of New MinesBecki Robins
Why Don’t We Eat Turkey Eggs?Dan Nosowitz
Holey Cow: The Wonderful World of a Fistulated CowAnna O†™Brien
6 Differences Between Llamas and AlpacasAndrew Amelinckx
Explore Modern Farmer
Related
news
The Fertilizer Shortage Will Persist in 2023Shea Swenson
Environment, Food & Drink
Where Has All the Mustard Gone?Chloe Faure
Animals, Environment, Technology
Alaskan Salmon Face a Stream of New MinesBecki Robins
Animals, MTMF
Meet the Maine Teenager-Turned-Landscaper Thanks to Grazing GoatsBridget Shirvell
wpDiscuz
We use cookies on our website to give you the most relevant experience by remembering your preferences and repeat visits. By clicking “Accept”, you consent to the use of ALL the cookies.
Cookie settings ACCEPT
Privacy & Cookies Policy