Inside the Pig War of 1859 - Modern Farmer
Lifestyle

How one dead swine nearly sparked an epic set of battles between the British and Americans. 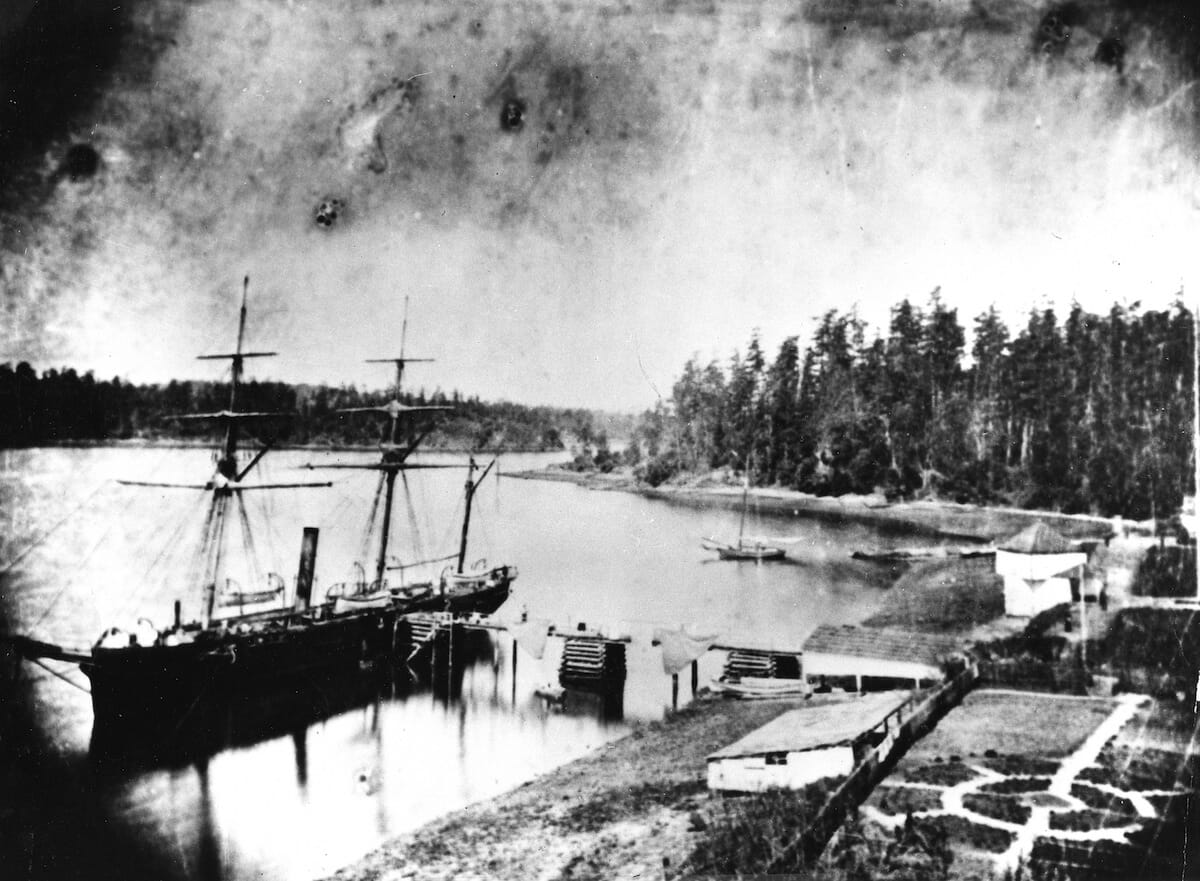 Under the Donation Land Claim Act of 1850, any white male citizen over 21 years of age was entitled to 160 free acres, and so Cutlar staked his claim. It wasn’t a bonanza of gold nuggets, but by April of 1859, a small cabin and land to farm seemed like just the break he needed. The 55-square mile island was thick with cedar and fir forests, and boasted the kind of rich topsoil ideal for Cutlar’s potato patch.

But from the very beginning, there was trouble on the island. And it would only get worse, as the beleaguered Cutlar ended up starting one of the lesser-known conflicts in American history: the Pig War of 1859.

By the time Cutlar arrived, tensions were high, and they often involved the Bay Company’s livestock.

Cutlar had been given bad information. It wasn’t officially a part of the United States, but rather claimed by it, along with Britain, and the strategic military point had thwarted negotiations for some time. While the two countries debated the 1846 Oregon Treaty’s ambiguities, their citizens saw to sovereignty on a local level. The British Hudson’s Bay Company established a sheep ranch, and a healthy number of American settlers came to work the land. Many of them, like Cutlar, believed they had the right to settle under the Donation Land Claim Act, but they were wrong on that front, too ”“ it didn’t apply to disputed territory.

By the time Cutlar arrived, tensions were high, and they often involved the Bay Company’s livestock. In 1855, a sheriff sailed in from the mainland, a posse on deck, with the intention to fleecing the sheep. They claimed back taxes as justification, but it was less about money than exerting American authority over the island. The Bay Company was thus sensitive to American encroachment when Cutlar settled in the middle of their sheep-run, and decided to treat the three-sided fence he built as a one-sided invitation. 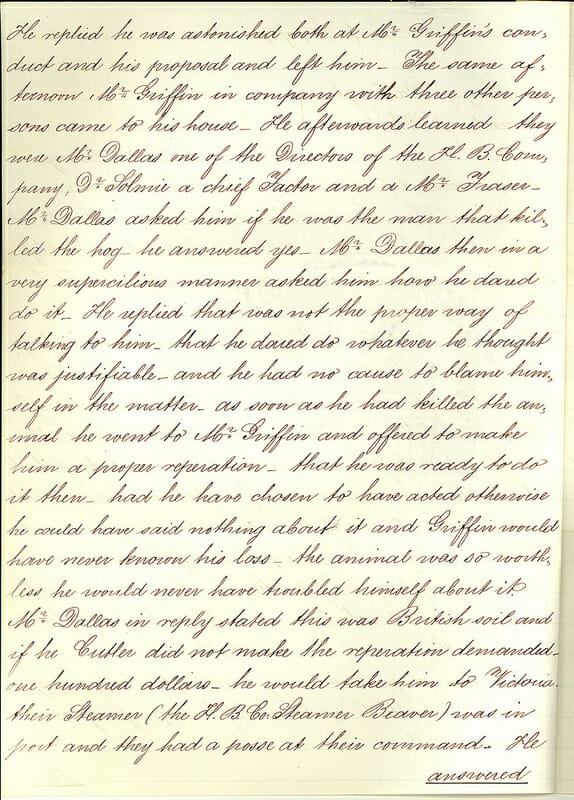 The affidavit of Lyman A. Cutlar, who instigated the Pig War.

The sheep weren’t interested in his potato patch, but the company’s black boars had a taste for the tubers.

On the morning of June 15, 1859, Cutlar awoke to the now-familiar sounds of a domestic pig foraging outside of his cabin. Rifle in hand, he found his suspicions confirmed, but he wasn’t the only man in attendance. Adding insult to injury was a hired hand from the Bay Company, watching with great amusement as the pig rooted through Cutlar’s potato patch.

Within moments, Cutlar shot the boar dead and started the Pig War of 1859. What happened next was debated by both camps, though they all agree a group of employees congregated outside of Cutlar’s cabin. He may have offered them compensation, but balked at their demands for $100. They may have threatened him in various ways, including arrest, with no intention of accepting money or resolving the neighborly dispute.

When General William S. Harney, the commander of the U.S. Army’s Oregon Department, toured the island a few weeks later, the pig incident was just one of many complaints leveled against the British. There were other problems, too, including Indian attacks, but Gen. Harney was Andrew Jackson’s protégé, and among lessons learned was a strong aversion to the British. He sent a detachment of infantrymen from Fort Bellingham, Washington, to settle the score, which did not go unnoticed by British governor. He’d been a longtime employee of the Bay Company, and harbored his own disdain for Americans. He believed his country had always given in too easily, and sent a dispatch home saying as much.

By July, American Captain George Pickett and his 66 men arrived had on San Juan Island, and quickly overstepped their boundaries. Their mandate had been to offer protection from Indian attacks and British interference, but the sign Pickett posted above the dock declared the island under American sovereignty. The laws of the United States would be upheld, and if they weren’t, Pickett promised he would be the one enforcing them.

By the end of the day, the British ship the HMS Satellite had 21 mounted guns aimed at the island, and two additional British ships soon followed. They did so in the absence of the Royal Navy’s commander, who was in Chile, so no shots were fired. The two camps did interact, but they had little authority, and so that’s what they did: wait, watch and call for the other to retreat immediately.

Pickett held his ground, amassing artillery and an additional 424 enlisted men, but the Americans were outnumbered. By August, he counted a total of five British ships, and his letters requesting orders became more frequent.

The British Captain Geoffrey Phipps Hornby had received orders, but he wasn’t confident about them. The British governor wanted his Royal Marines to occupy San Juan, but the captain boldly resisted. They would most certainly see blood lost on both sides, and there was concern over what that might portend for the two countries.

London and Washington weren’t ignoring the problem. Word travelled slowly, and it would be September by the time they learned of the dispute. When President James Buchanan heard about Gen. Harney’s aggressive behavior, he sent Winfeld Scott, a military general with a gift for diplomacy, to resolve the matter in October. By the time he sailed home a month later, Scott left but one British warship behind, and a very small number of American troops.

Scott had successfully negotiated a joint occupation with the British, with 100 of their respective troops occupying the island. The British end boasted a proper English garden and family quarters, but the American camp, still led by Capt. Pickett, hardly compared. The Americans were far more interested in the impending Civil War, and felt stranded on the island.

In 1861, Capt. Pickett’s home state of Virginia seceded from the Union. Two months later, he quit his post and headed home to join the Confederacy, where his enthusiasm was not so easily squashed. On the last day of the Battle of Gettysburg, he led thousands of men up Cemetery Ridge, most of whom would be captured, killed, or wounded on July 3, 1863. Capt. Pickett survived that turning point in the war, and would go on to lead other dramatic defeats.

Without aggressive captains, the occupying forces on San Juan Island learned to peacefully coexist. In 1872, Germany served as arbitrator over the matter, and the United States secured the territory.

The Pig War of 1859 was far more of a standoff than a battle. There was only one life lost to it, and that was of a pig. In 1961, the San Juan Island National Historical Park was established, where guides lead groups from the British to the American side, telling the tale of the war that wasn’t. The most popular question asked has little nothing do with the Oregon Treaty, the Civil War, the gold rush or any other issues of state.

What happened to the plundering pig, visitors want to know, but the answer has been lost to time.