A French Farm Show: Cows, Protesters and, Of Course, Cheese

And it’s enormous. This year, 703,000 people stood in line to enter the seven pavilions at the Porte de Versailles exhibition center in Paris’s 15th arrondissement. That’s more than 1 percent of the entire population of France. At the Salon, there are farm animals on display for education, competition and sale. Such as these, most […] 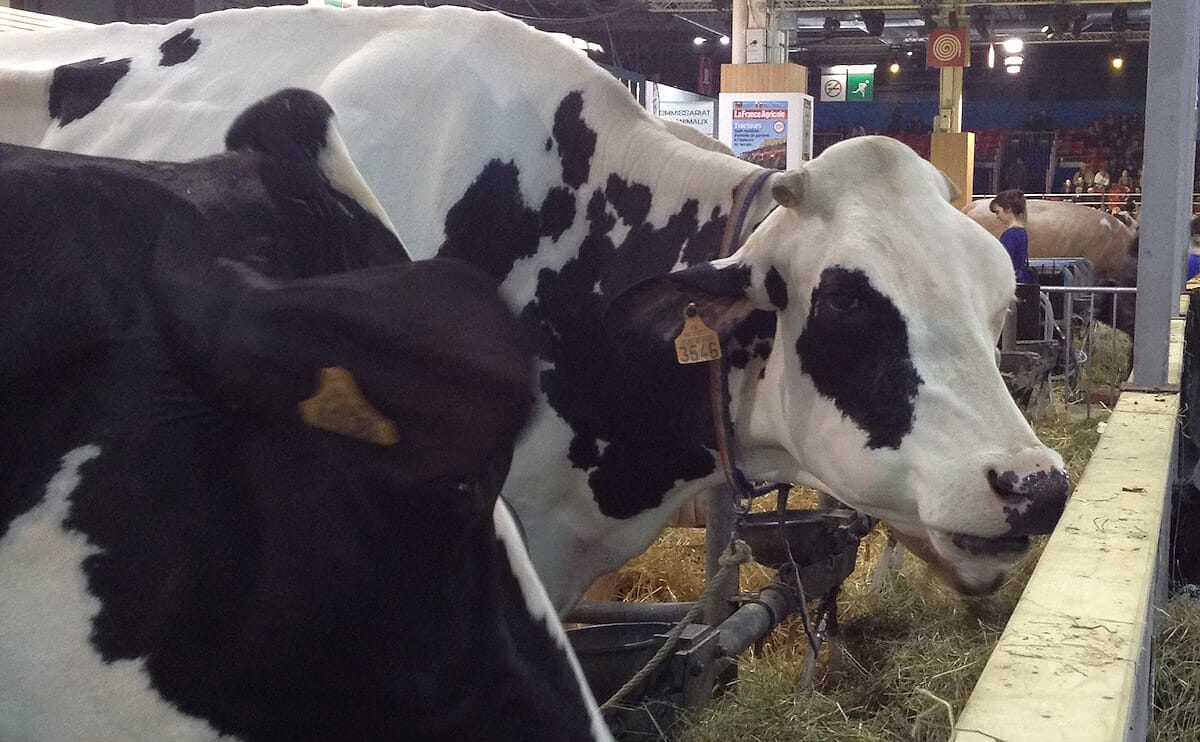 And it’s enormous. This year, 703,000 people stood in line to enter the seven pavilions at the Porte de Versailles exhibition center in Paris’s 15th arrondissement. That’s more than 1 percent of the entire population of France.

At the Salon, there are farm animals on display for education, competition and sale. Such as these, most but not all French breeds: 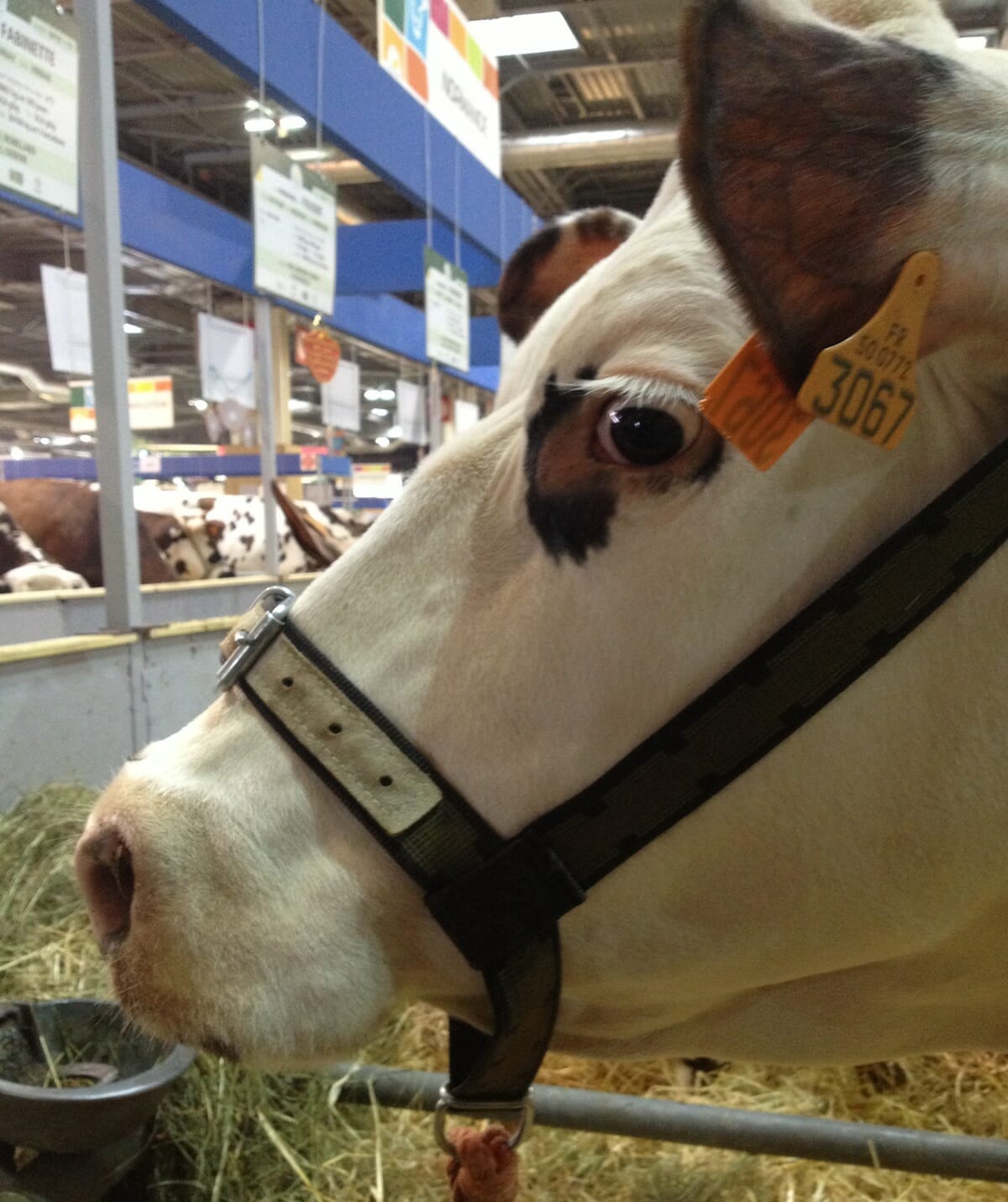 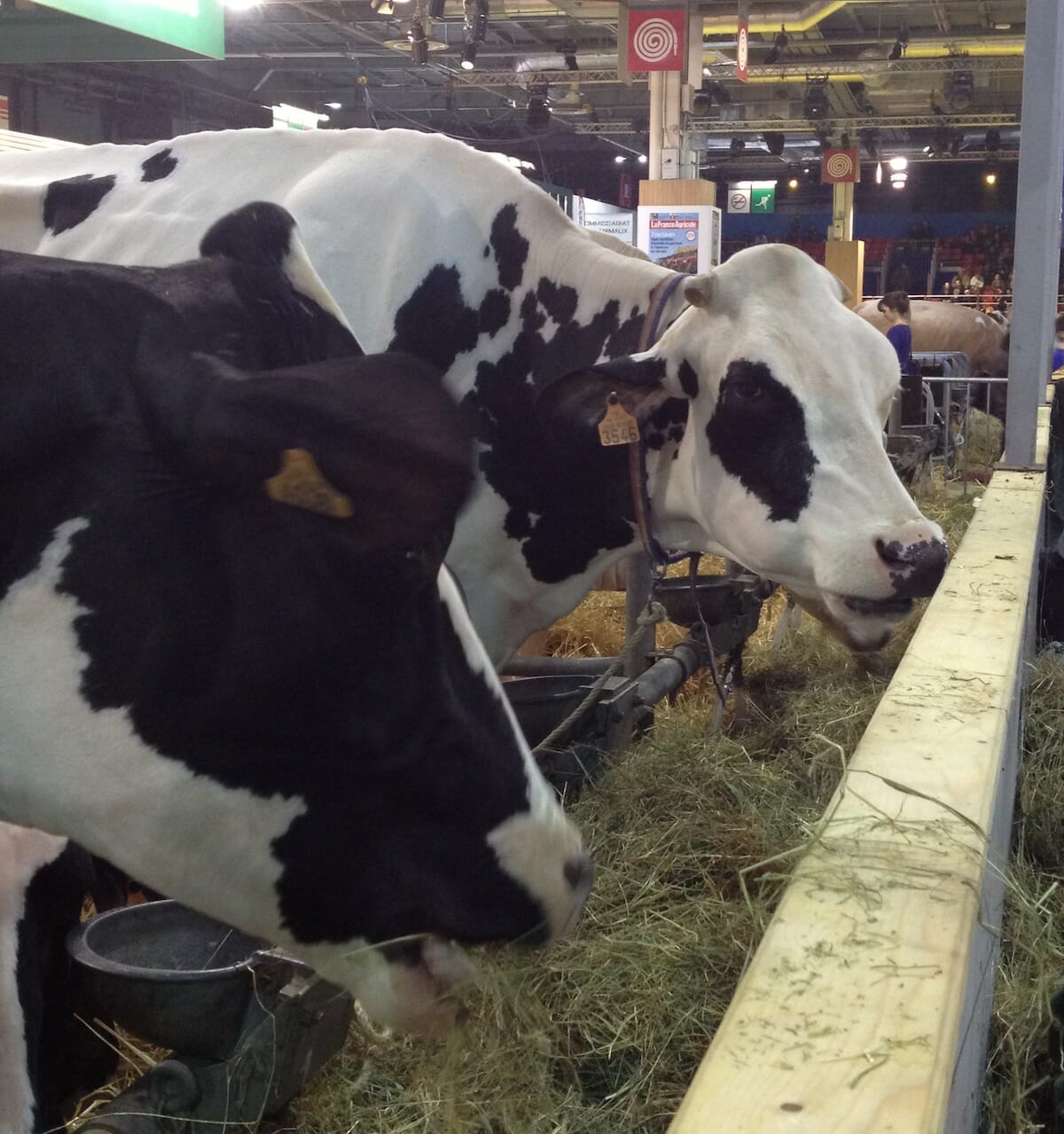 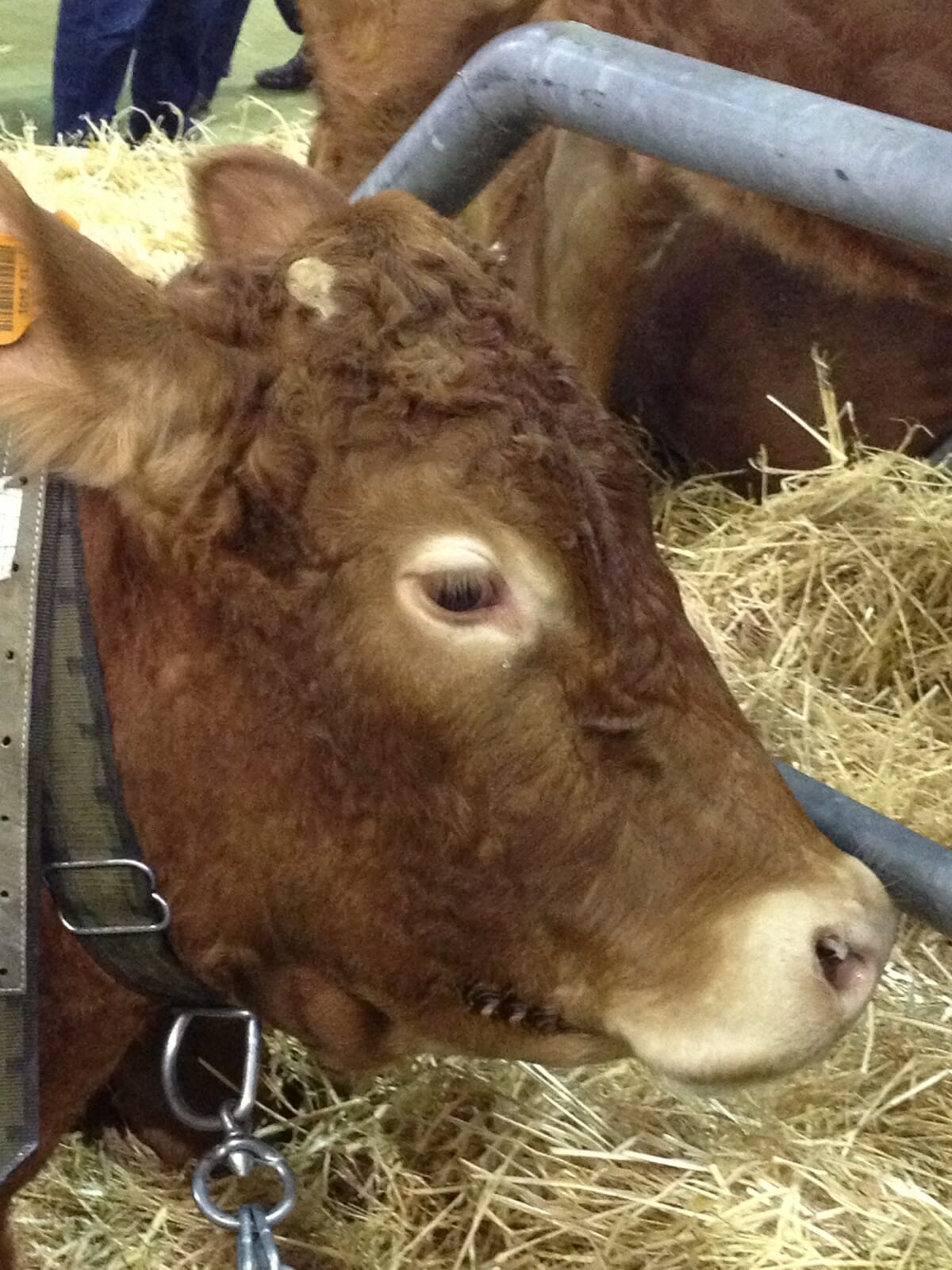 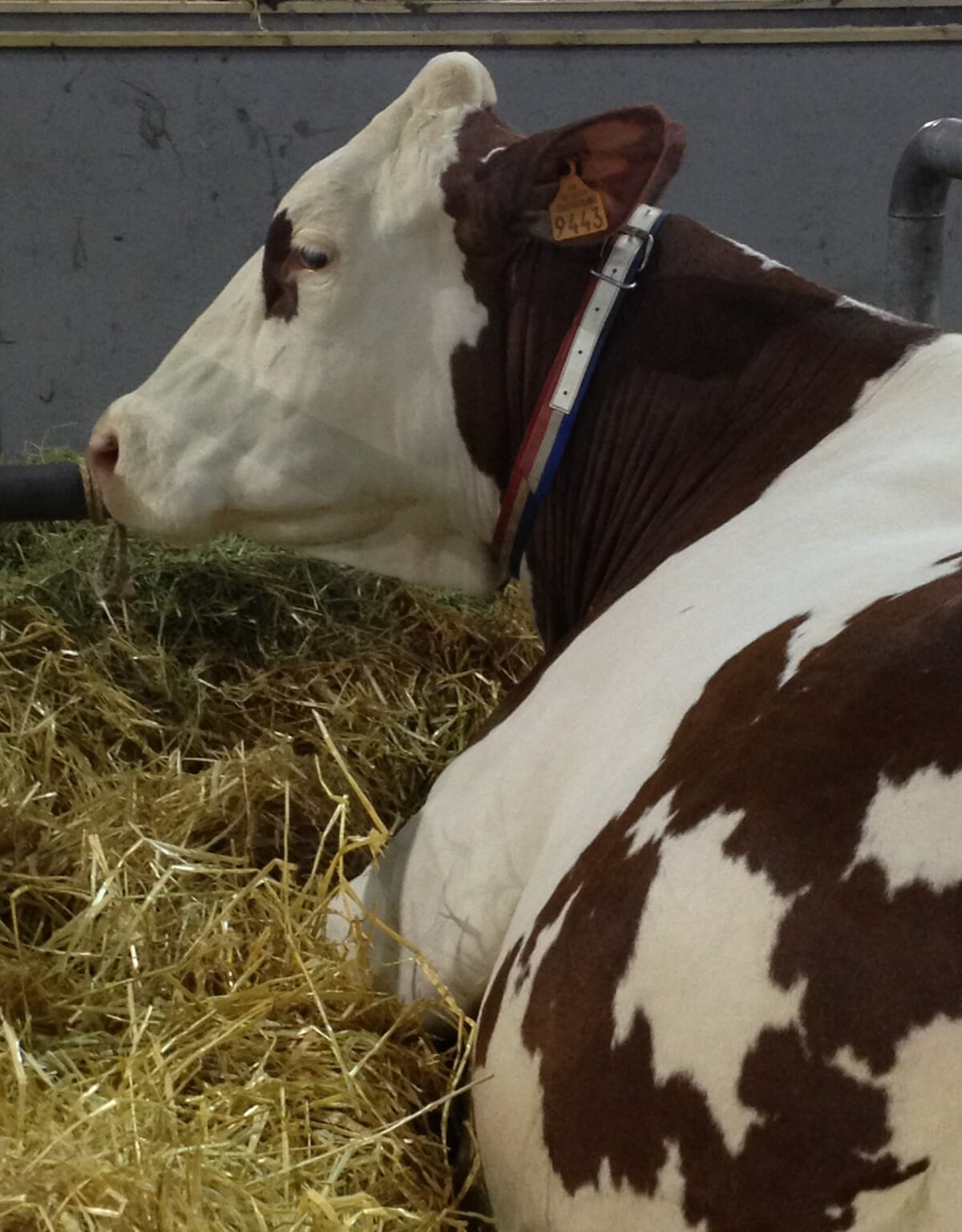 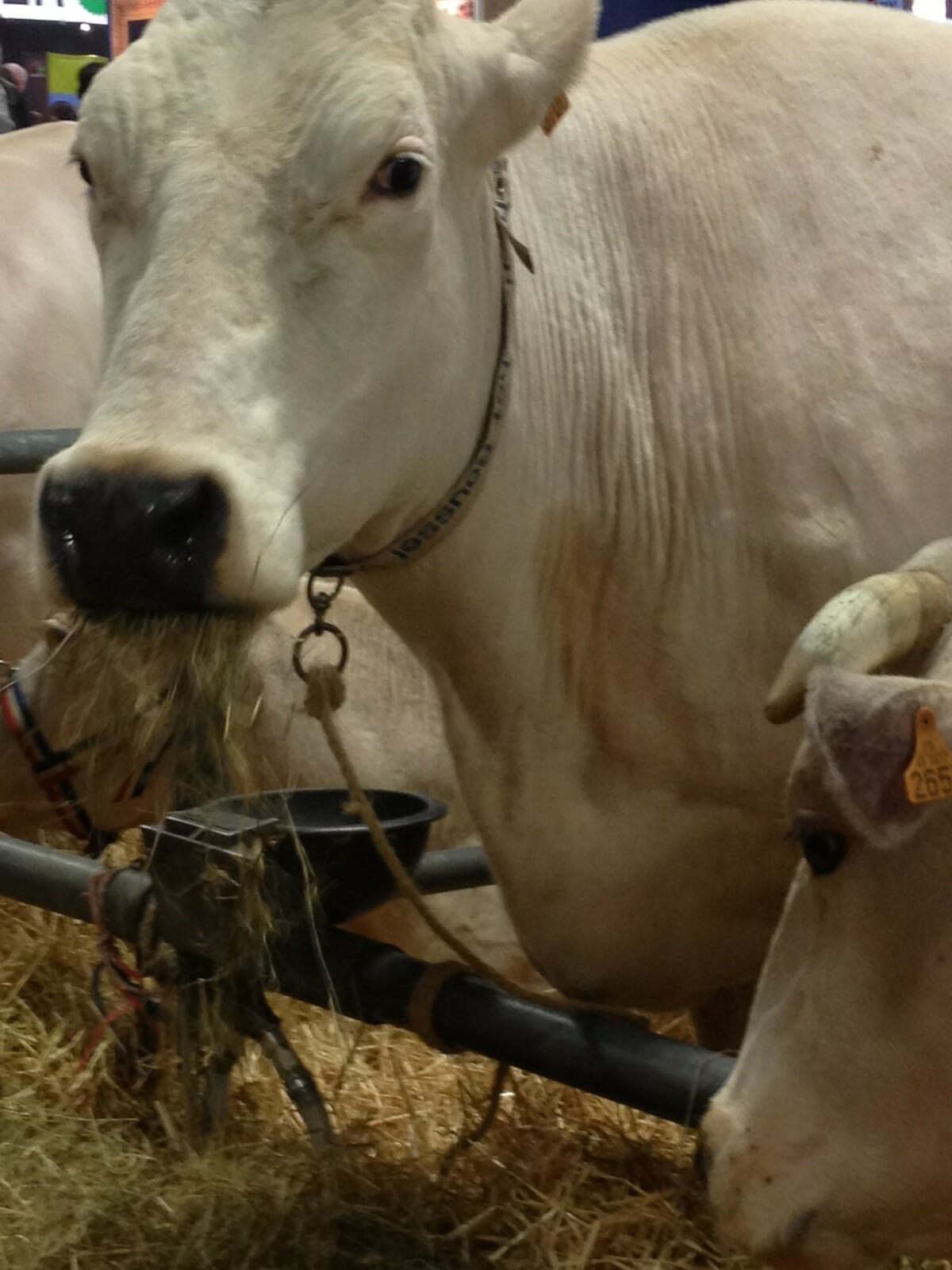 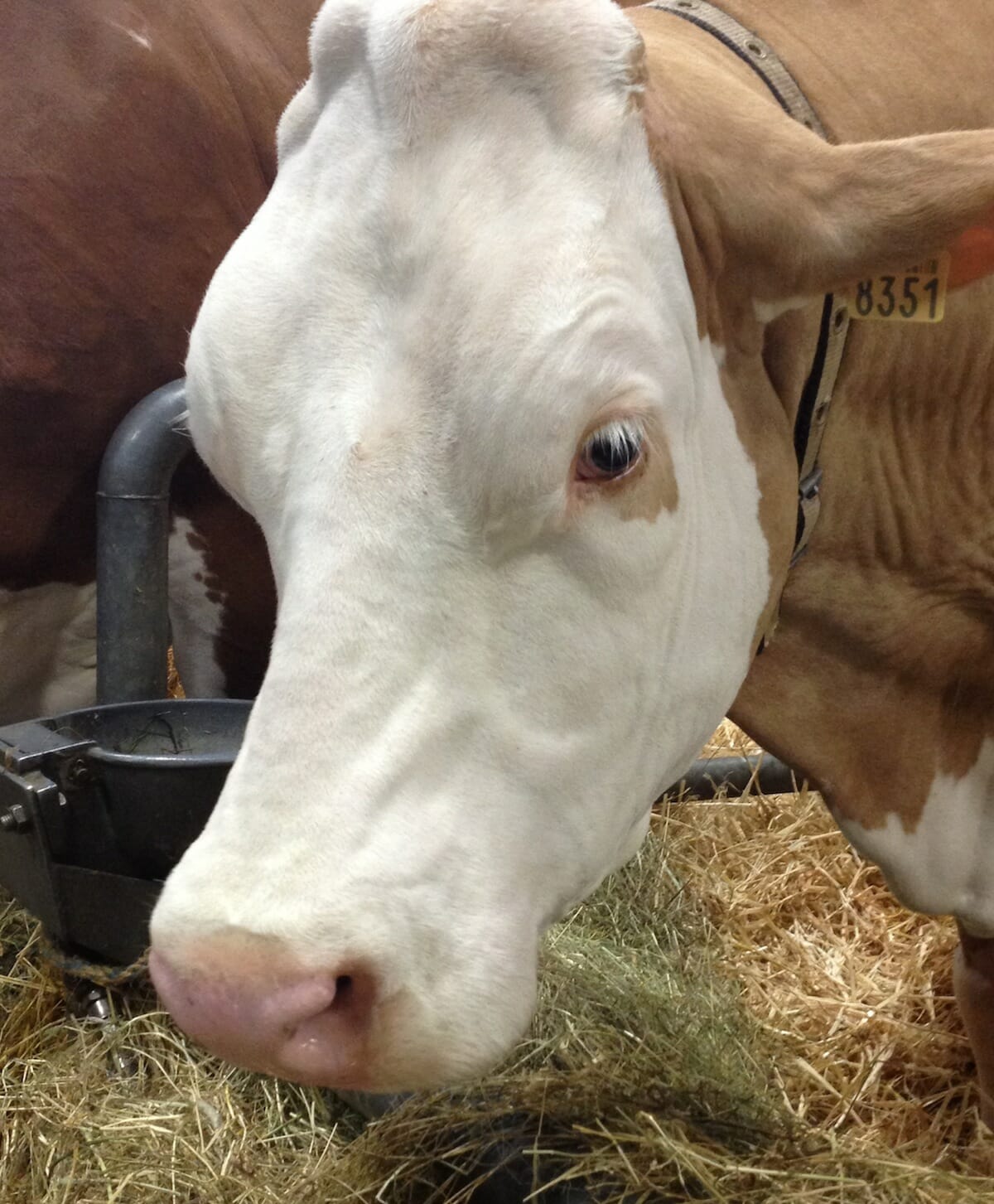 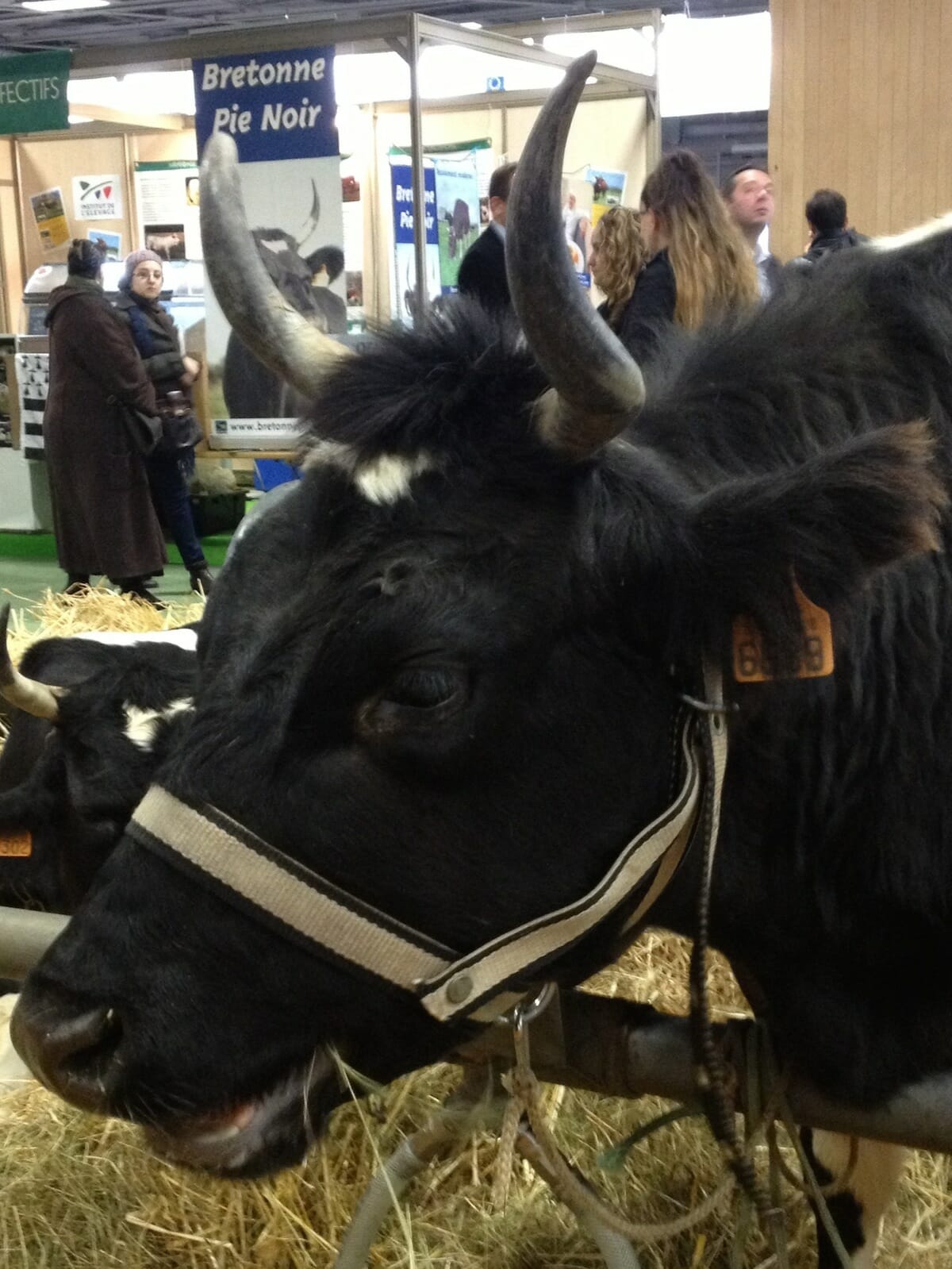 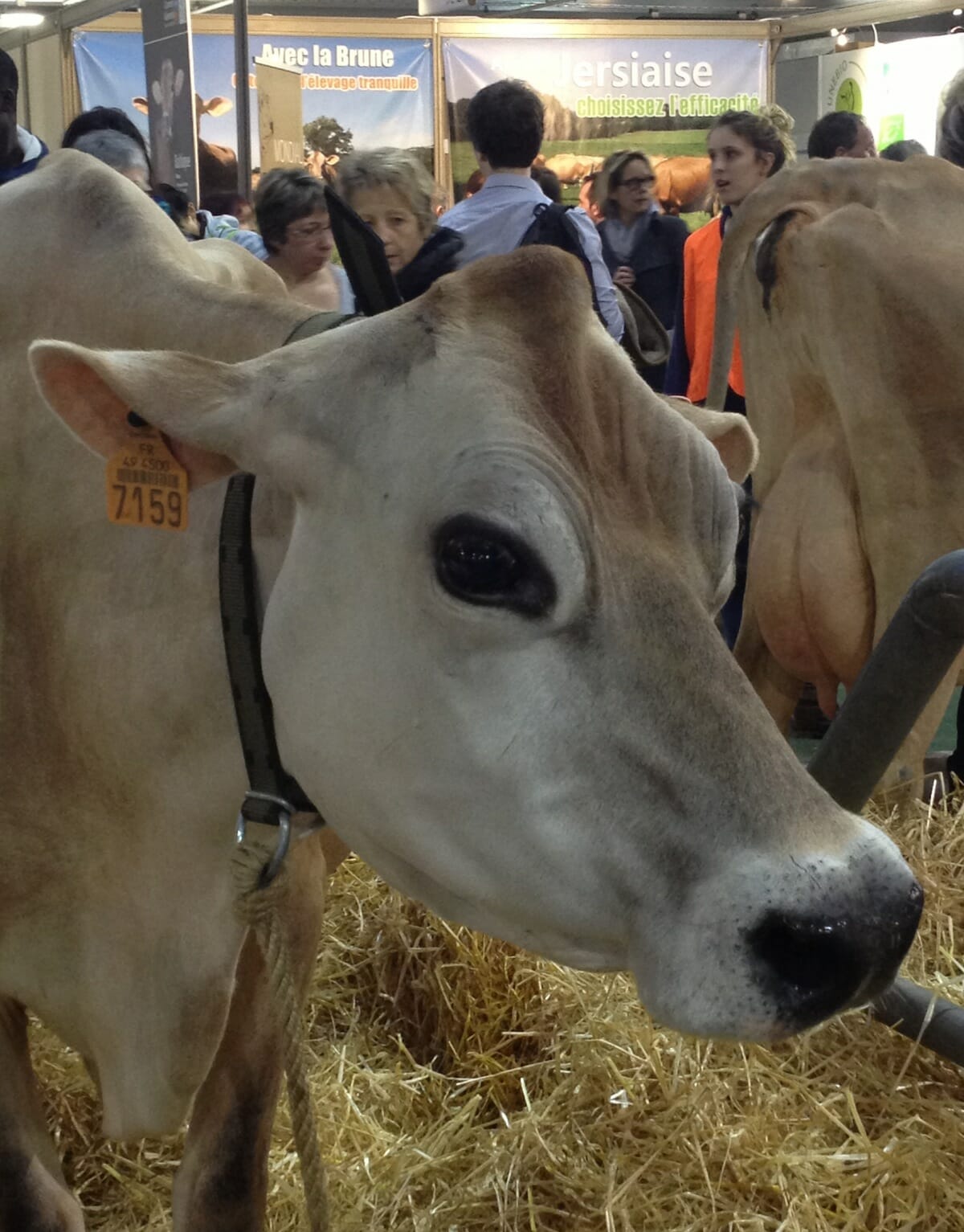 A Jersey, or, en franÁ§ais, Jersiaise. 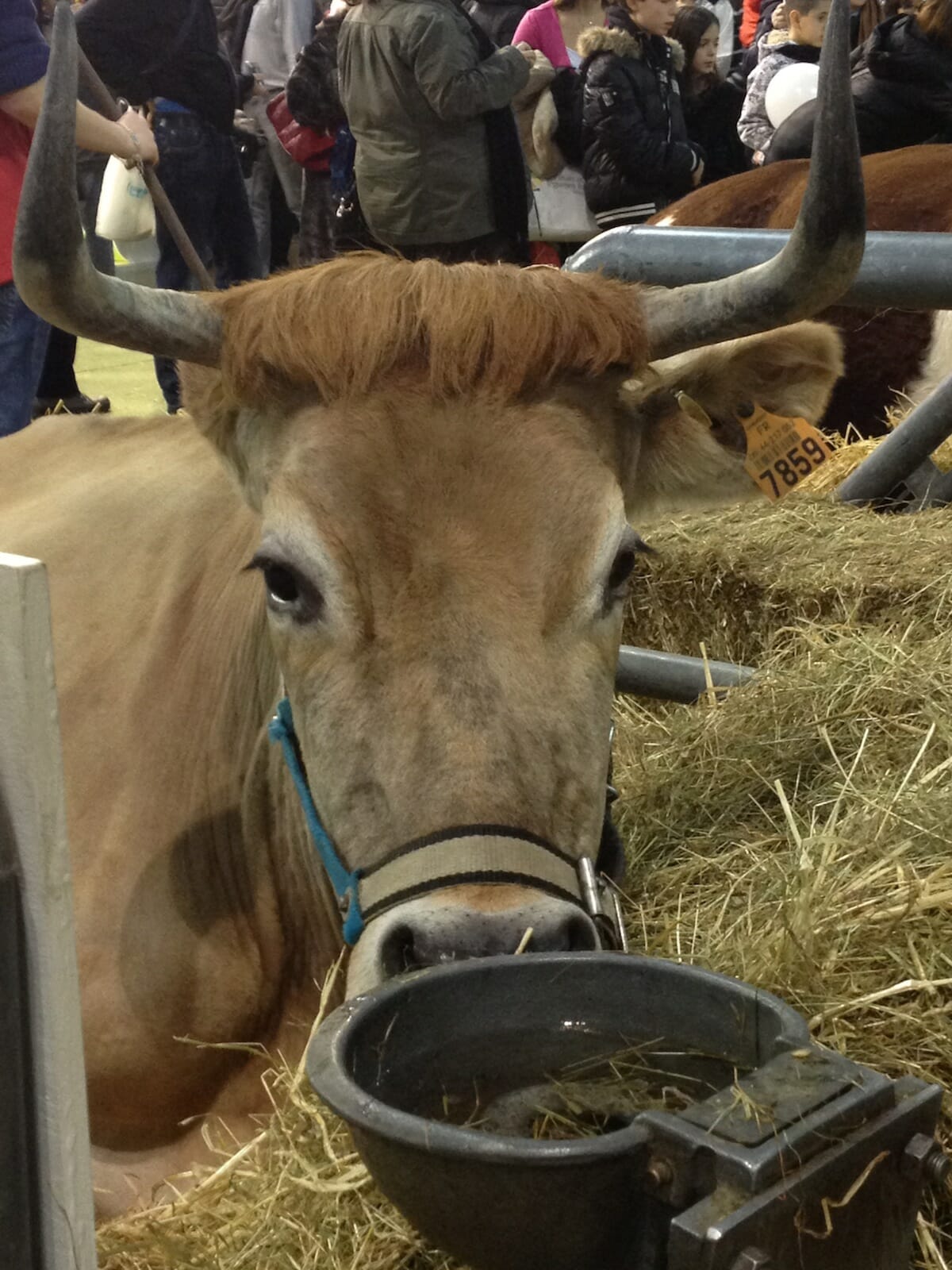 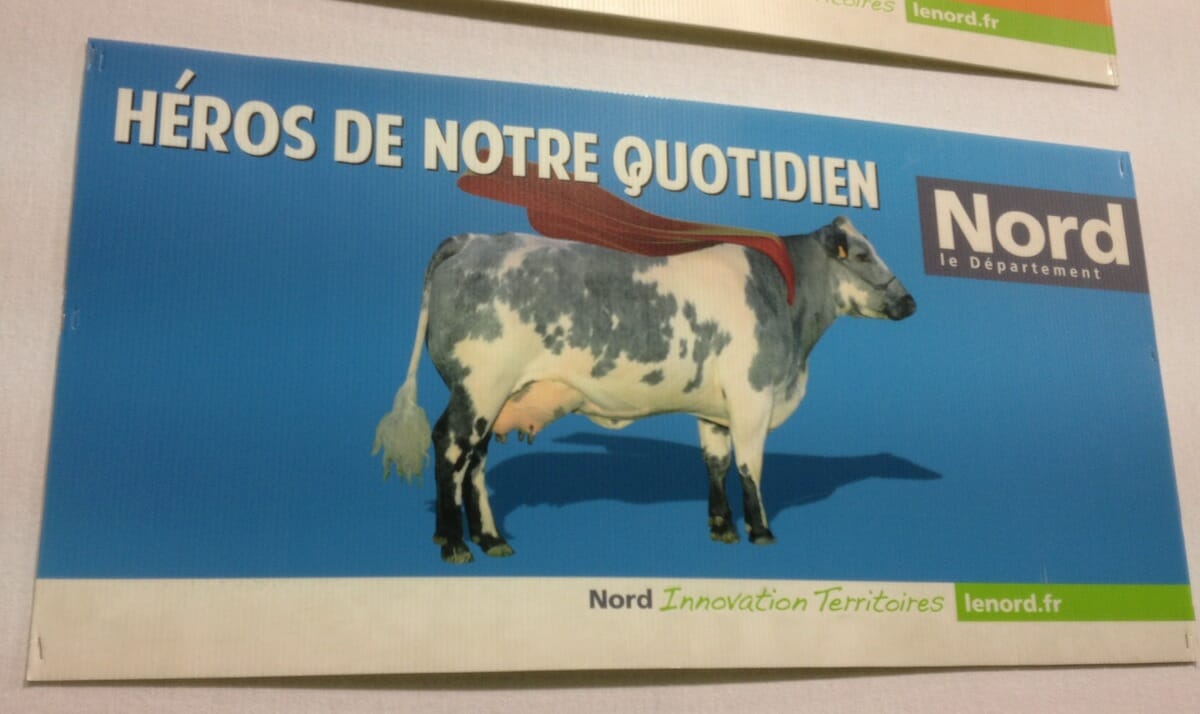 This poster from the dairy-pavilion booth of the French département Nord pas de Calais suggests how strongly people feel about their cows. (Translation: “The heroes of our daily lives,” or “Our everyday heroes.”) 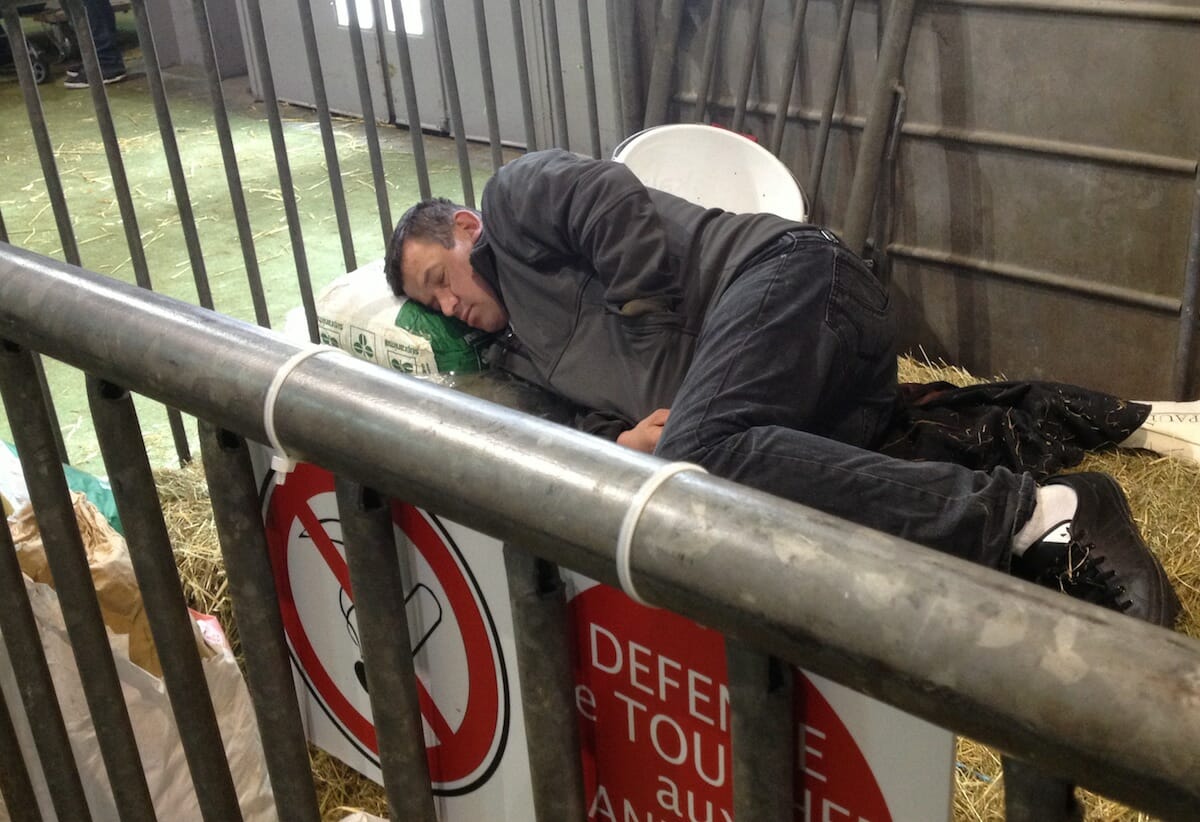 Taking care of the cows is exhausting; this member of a team naps in a booth labeled “Do not touch the animals.” 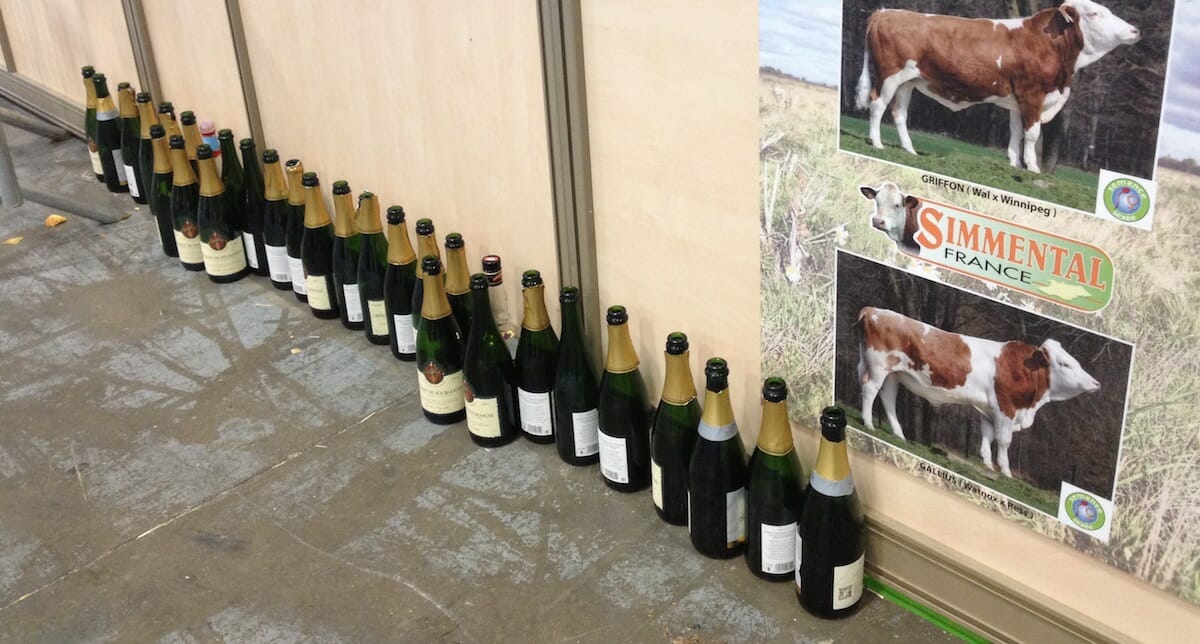 And thirsty work, according to these empty champagne bottles lined up outside the booth displaying the Simmental breed. 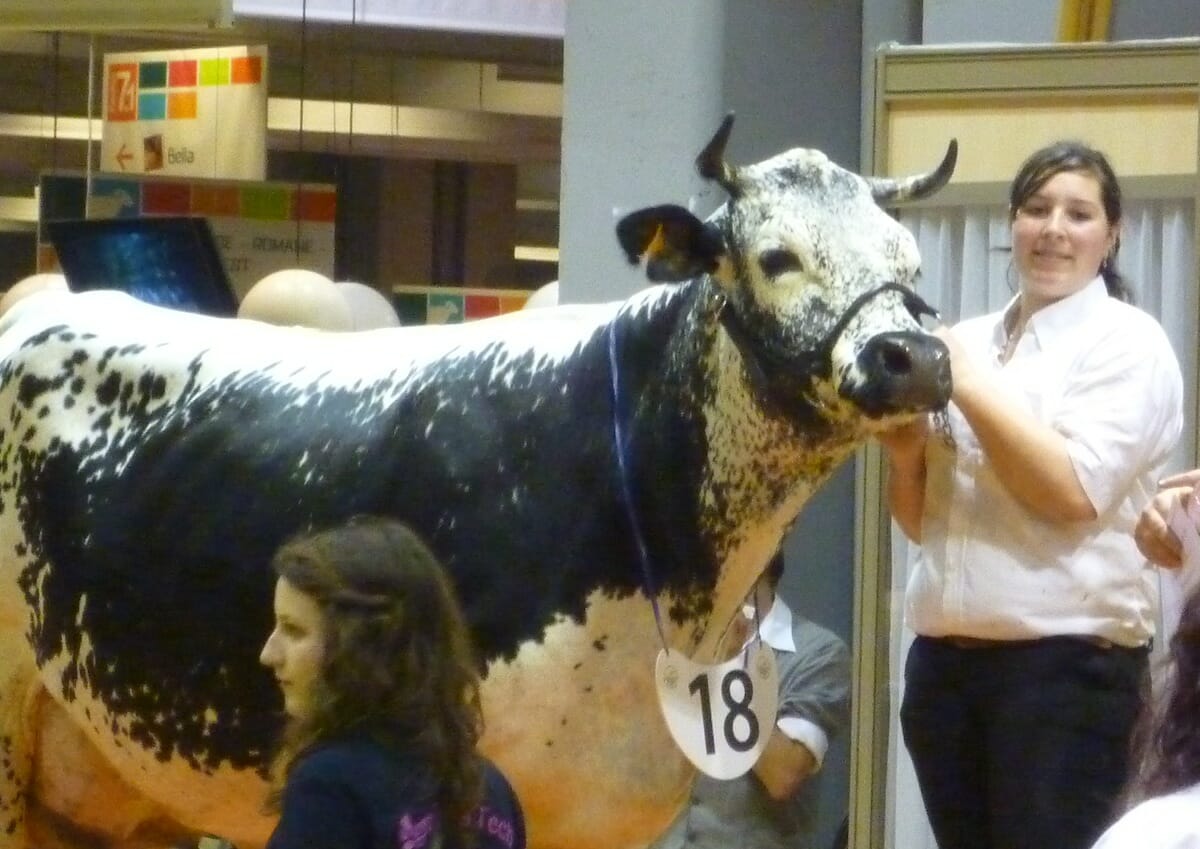 But rewarding: This Vosgesienne heifer Erika (18) has just been named best-of-breed. 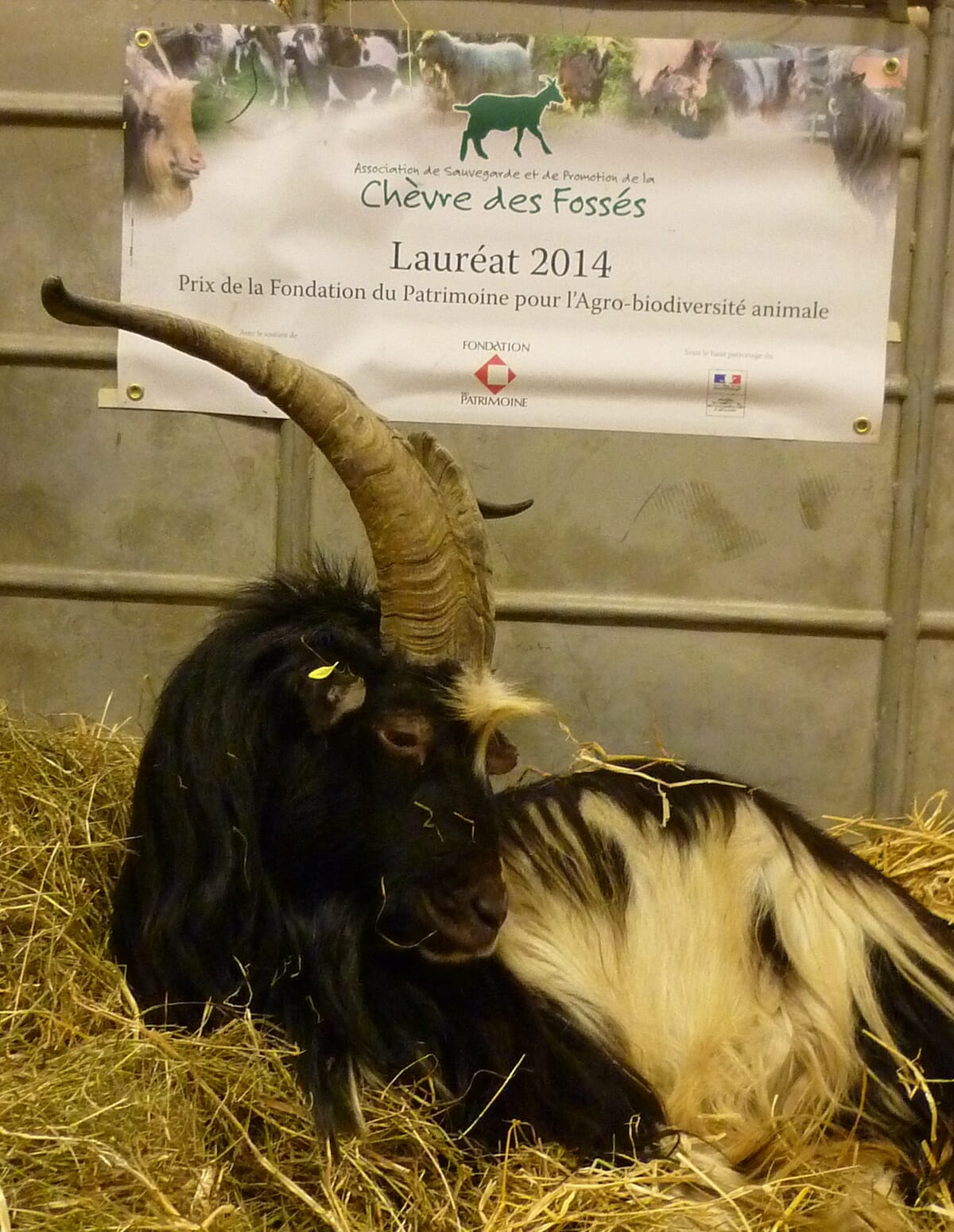 There are other animal breeds as well: A heritage mountain-goat breed, resting in front of a banner. 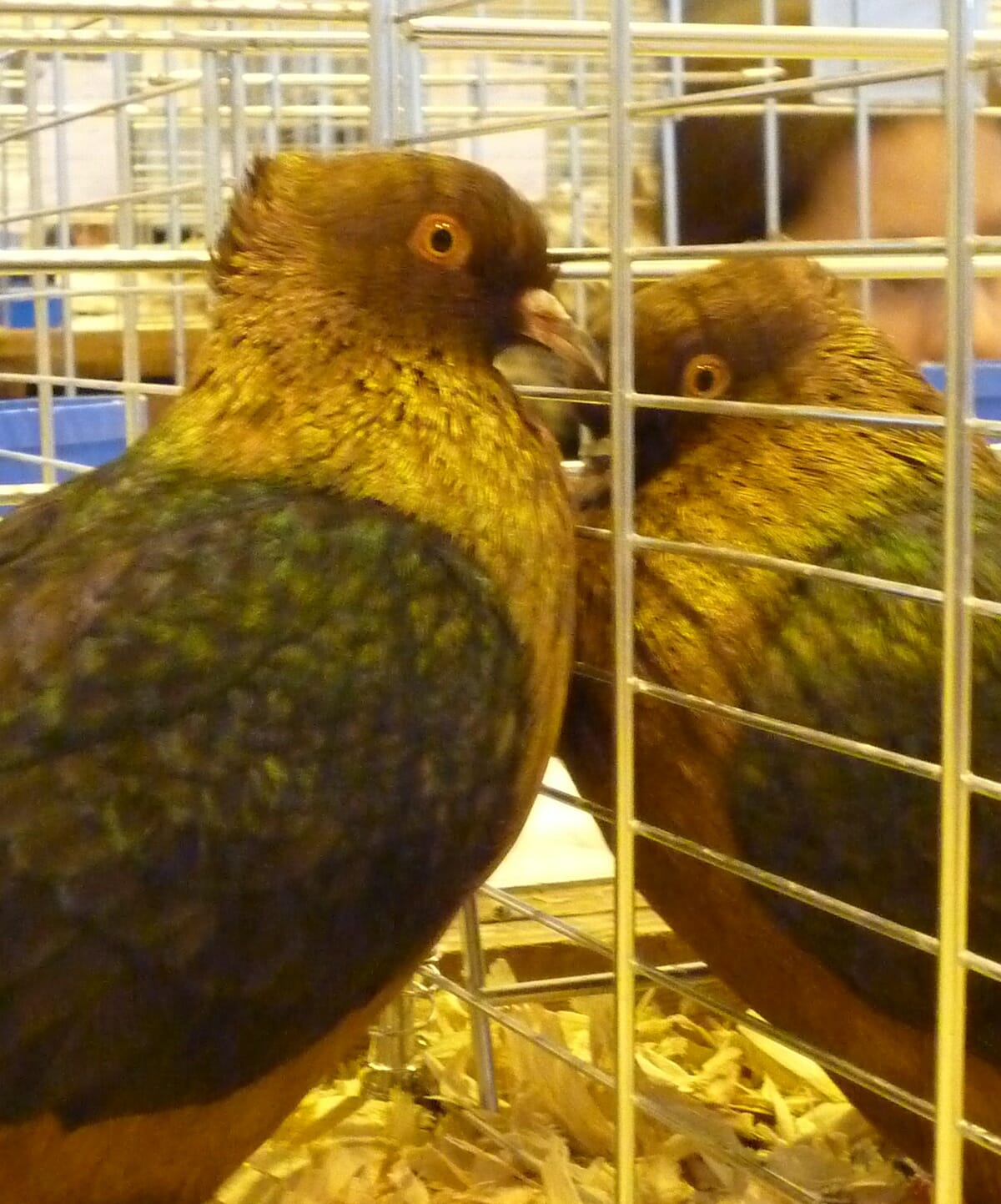 These are two Bouvreuil Arcengel pigeons. The pigeon judges said these “lacked a little luster on their lower feathers.” 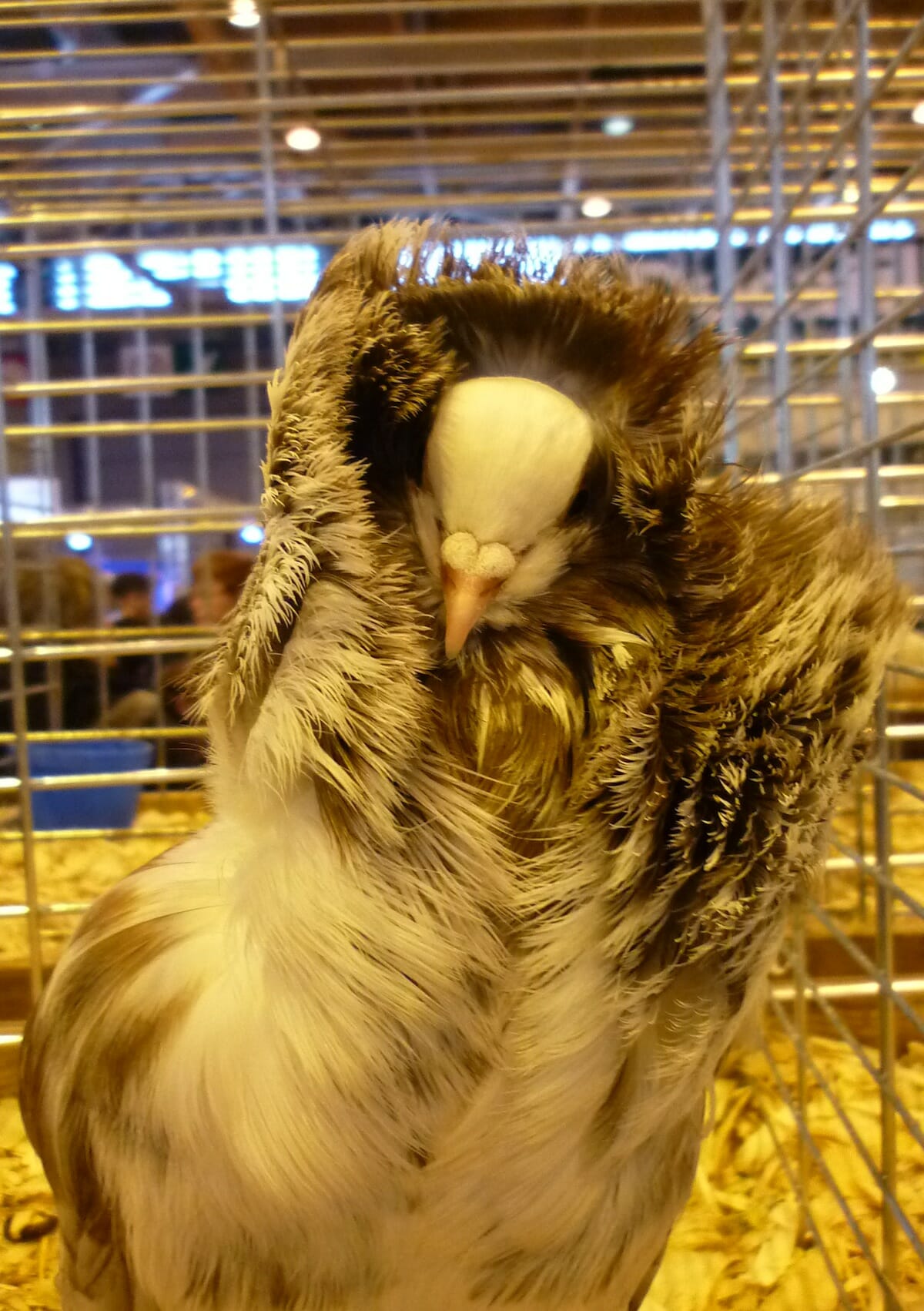 A Capuchin papilloté rouge pigeon, named for the brown-and-white hooded Capuchin monks, who also gave their name to cappuccinos. 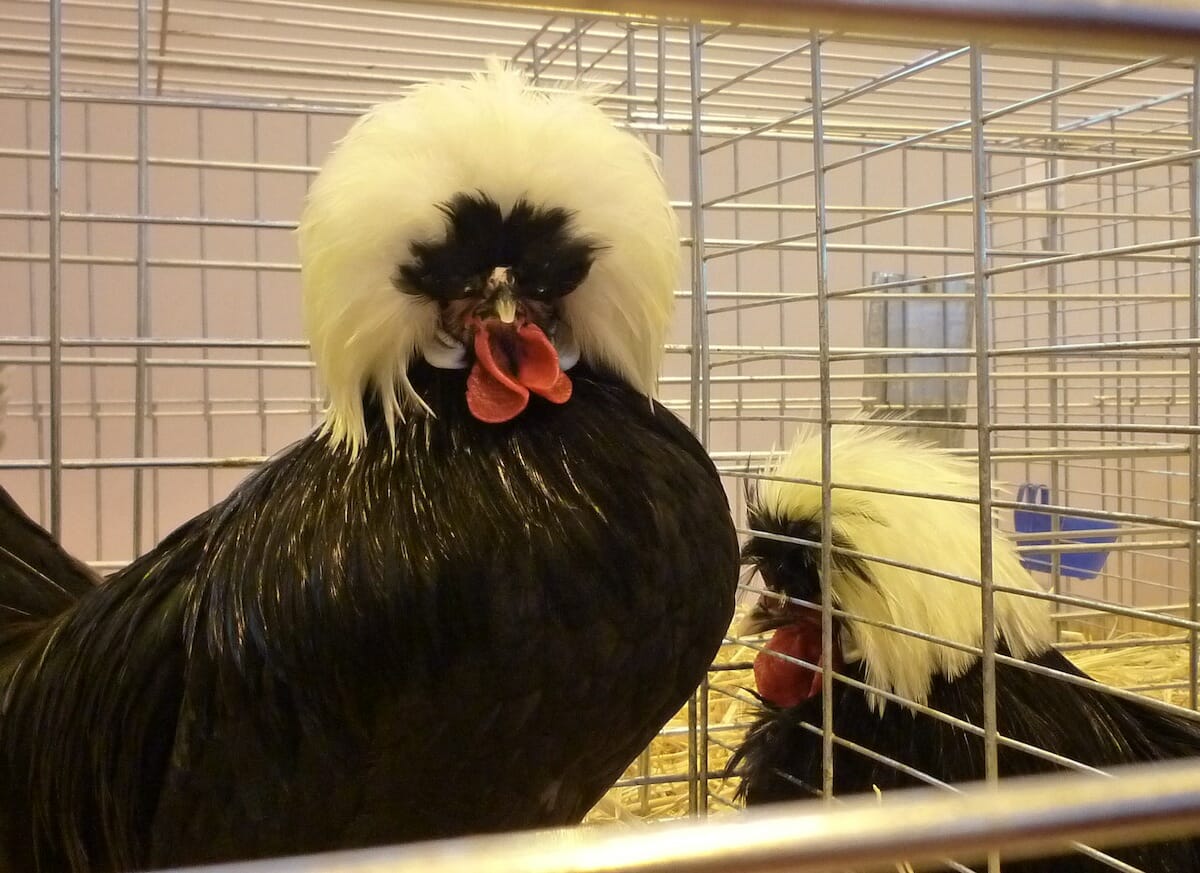 There’s also plenty of chickens, like this crested black Polish. 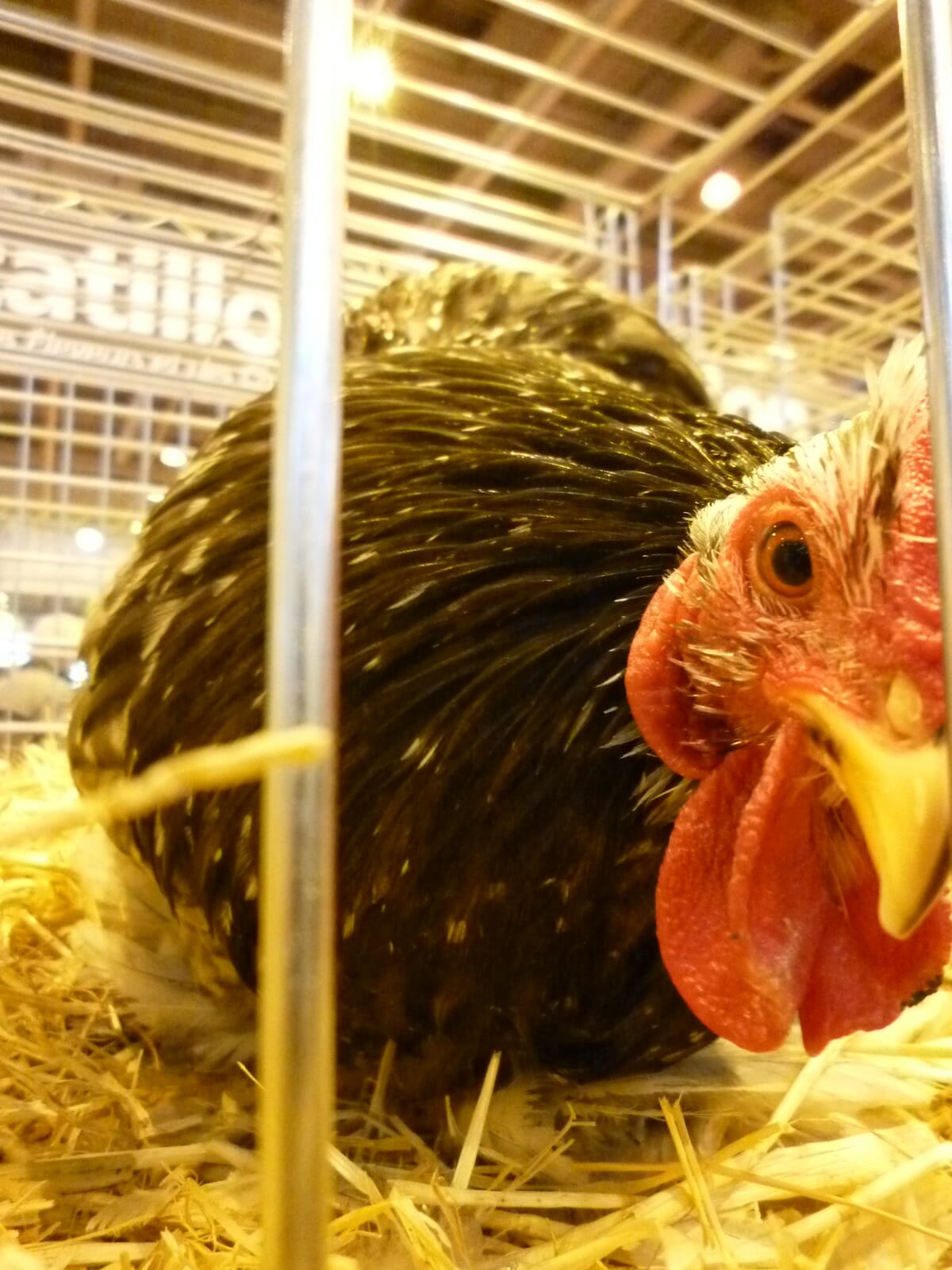 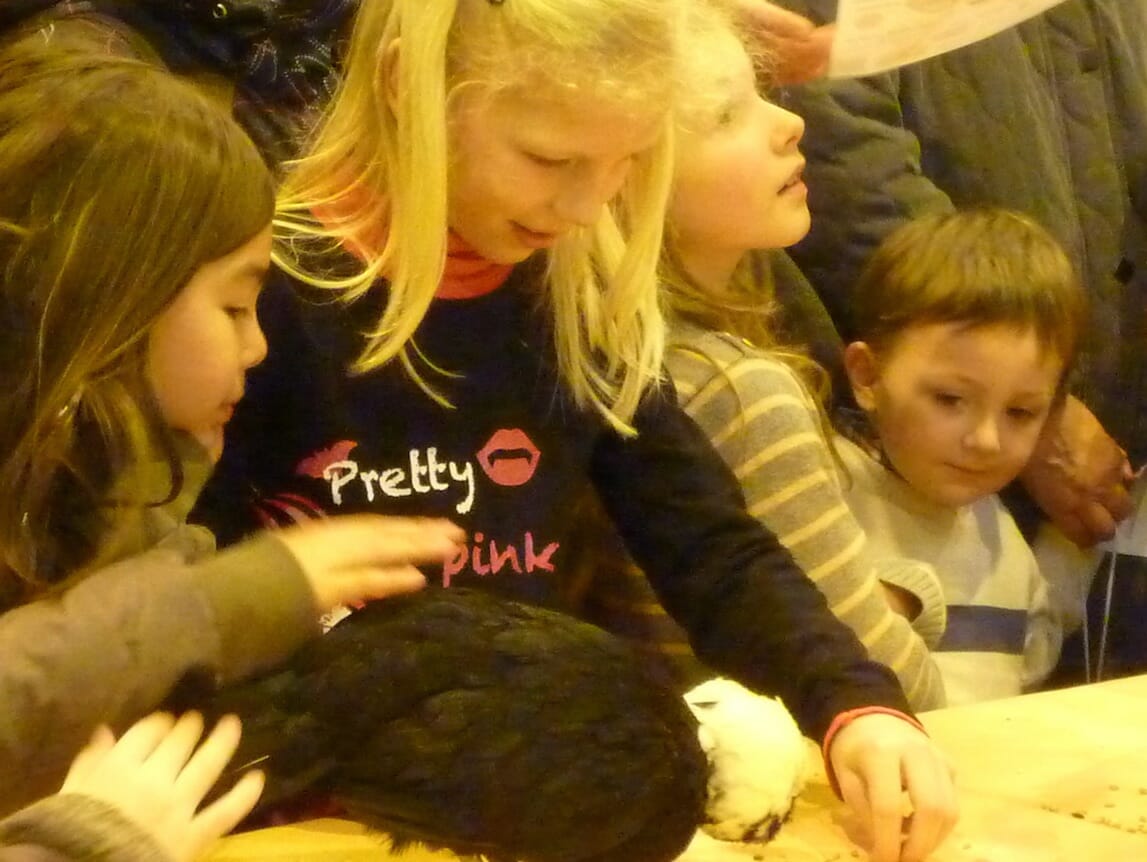 A good portion of the French population isn’t many generations removed from the farm, and at the policy level, there is agonizing over the decline of farming from economic pressure and foreign competition. So the Salon also provides a chance for people to introduce their children to the animals they may have only seen dead and cut-up in a supermarket. 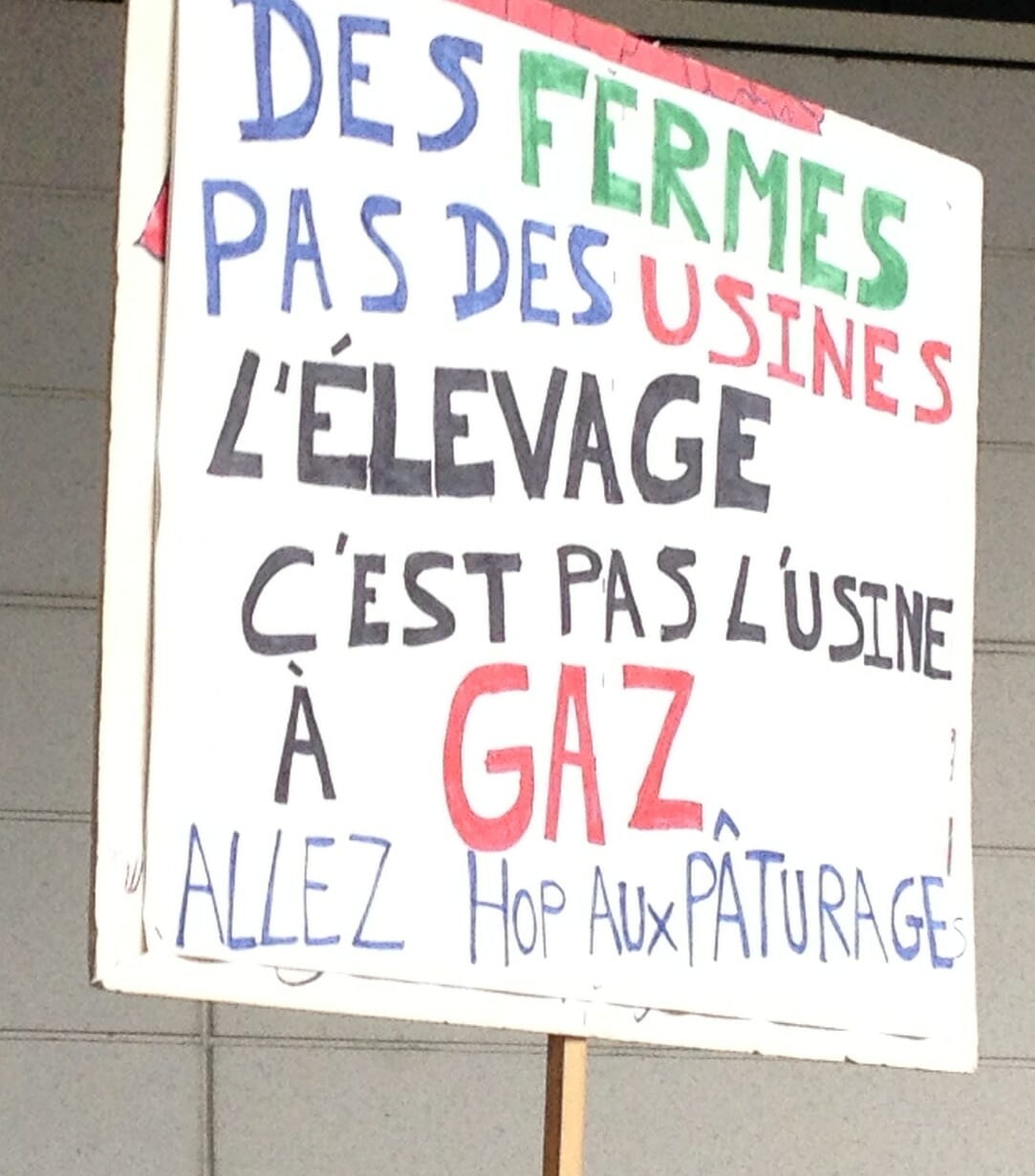 And because it is a French show, it couldn’t pass without a demonstration, and on several days, a group of people protested factory farming by dancing through the show to a rewrite of “Blurred Lines” while dressed as Holsteins. Here is a sign reading: “Farms not factories… Go pastures!” 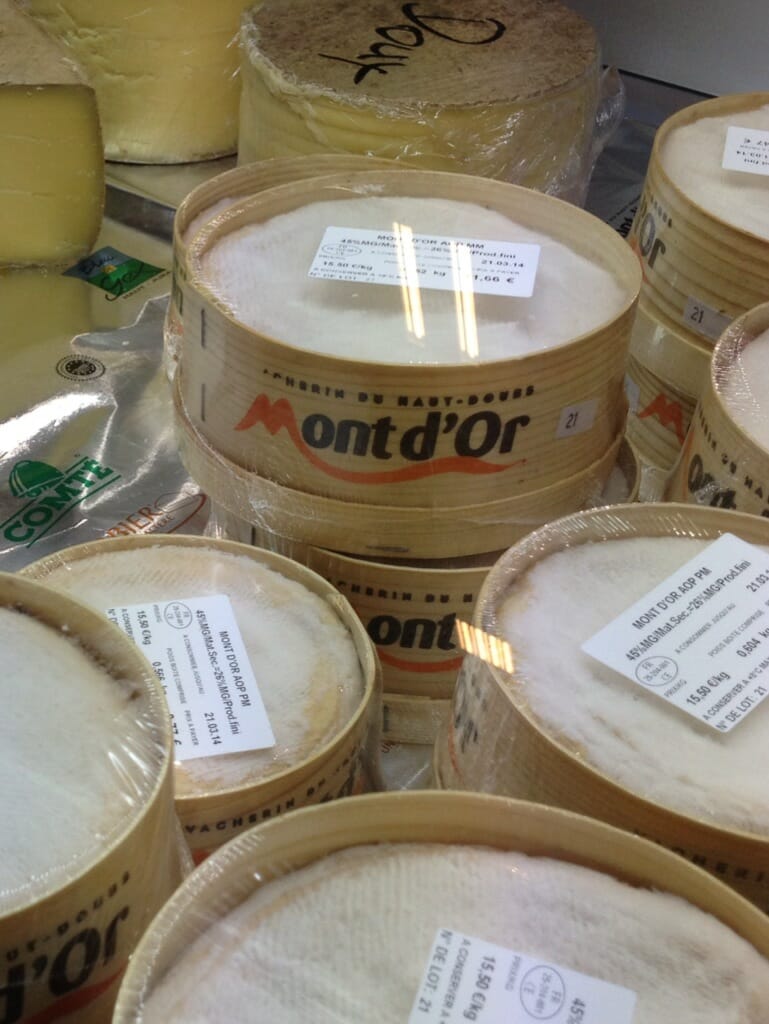 And also because it is a French show, there were very direct connections drawn between farms and the foods the animals produce, or become. There were serious restaurants set up by each political division of France (les départements), and food producers competed for awards. Also: there was lots of cheese for sale. 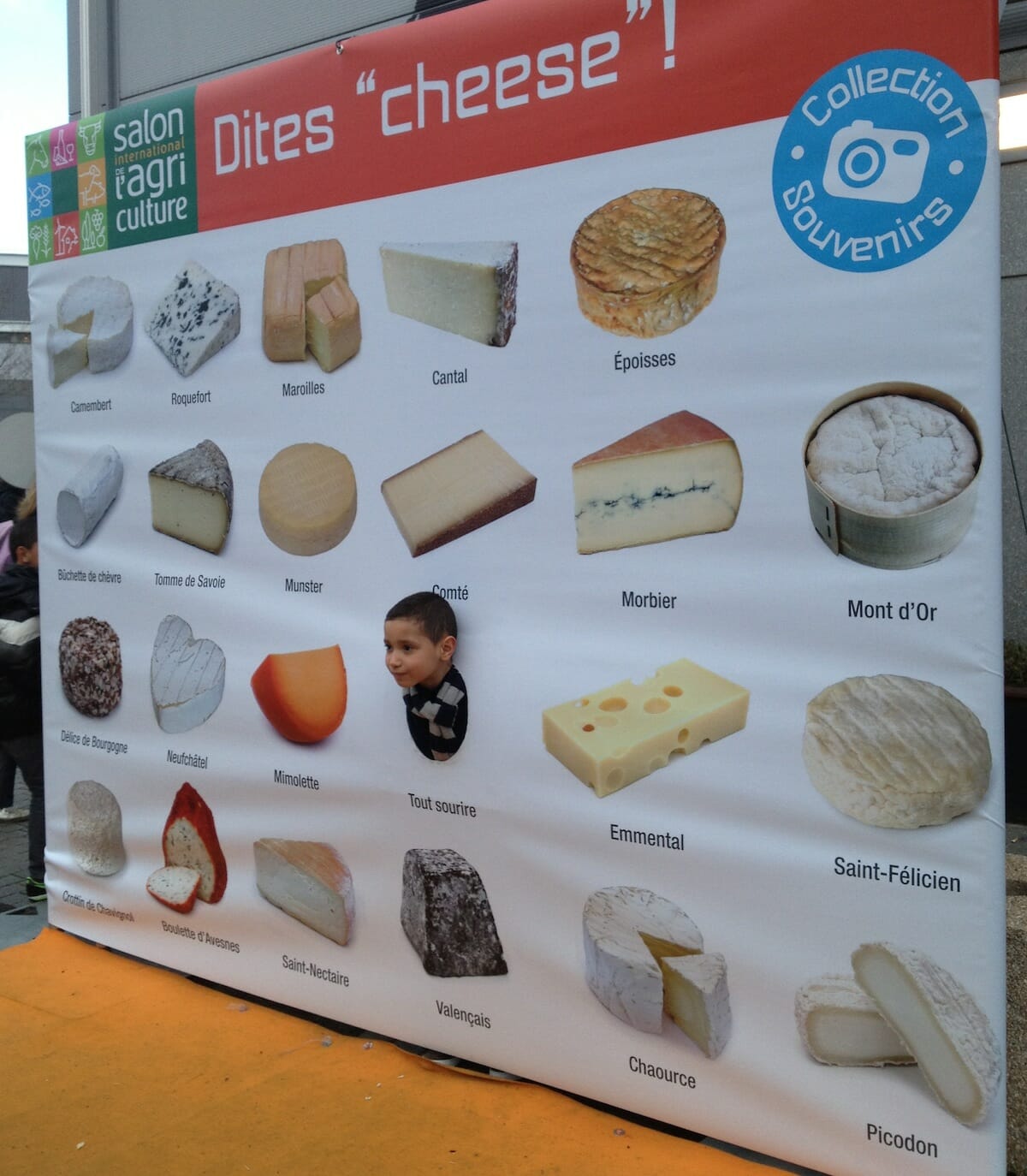 A chance to take your child’s picture posing as a cheese. 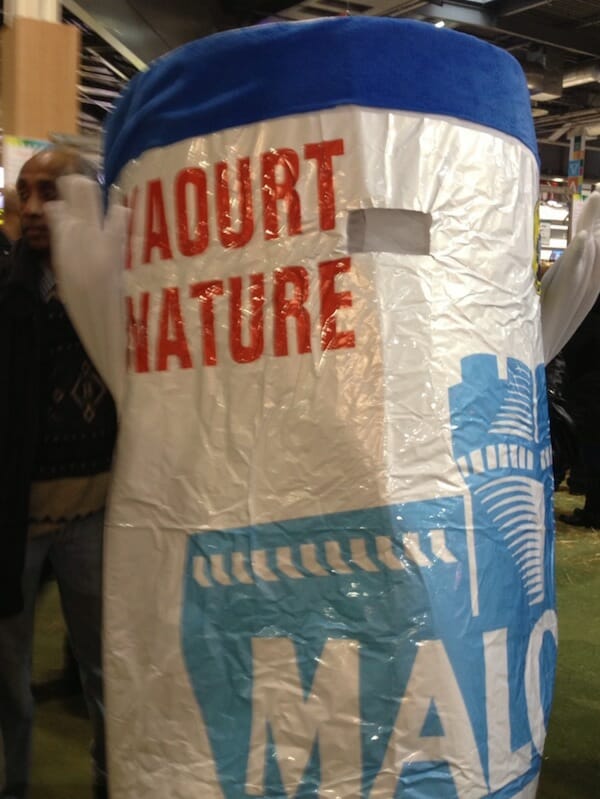 A member of the team from Brittany dressed up as a pot of plain (“nature”) yogurt. 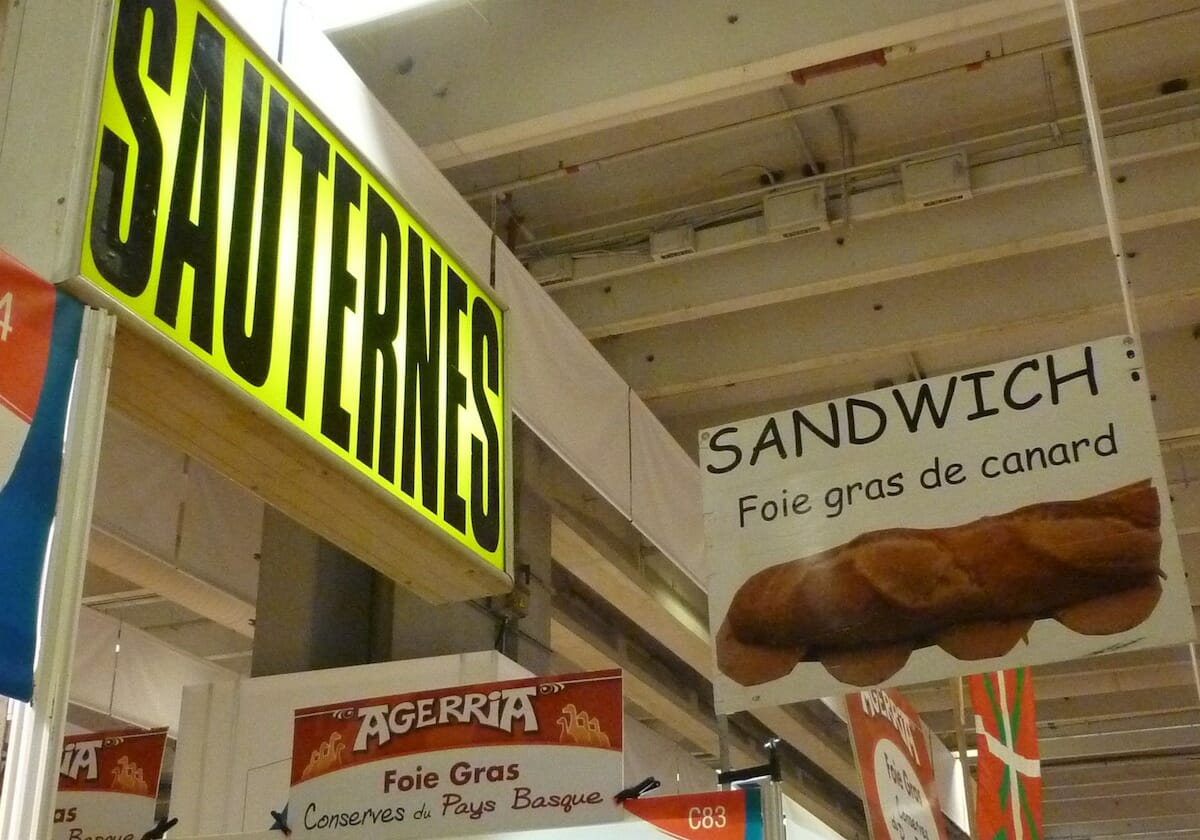 Because this is a French show, there is no fast food; the restaurants on the show floor feature time-honored French dishes, and lots of wine. 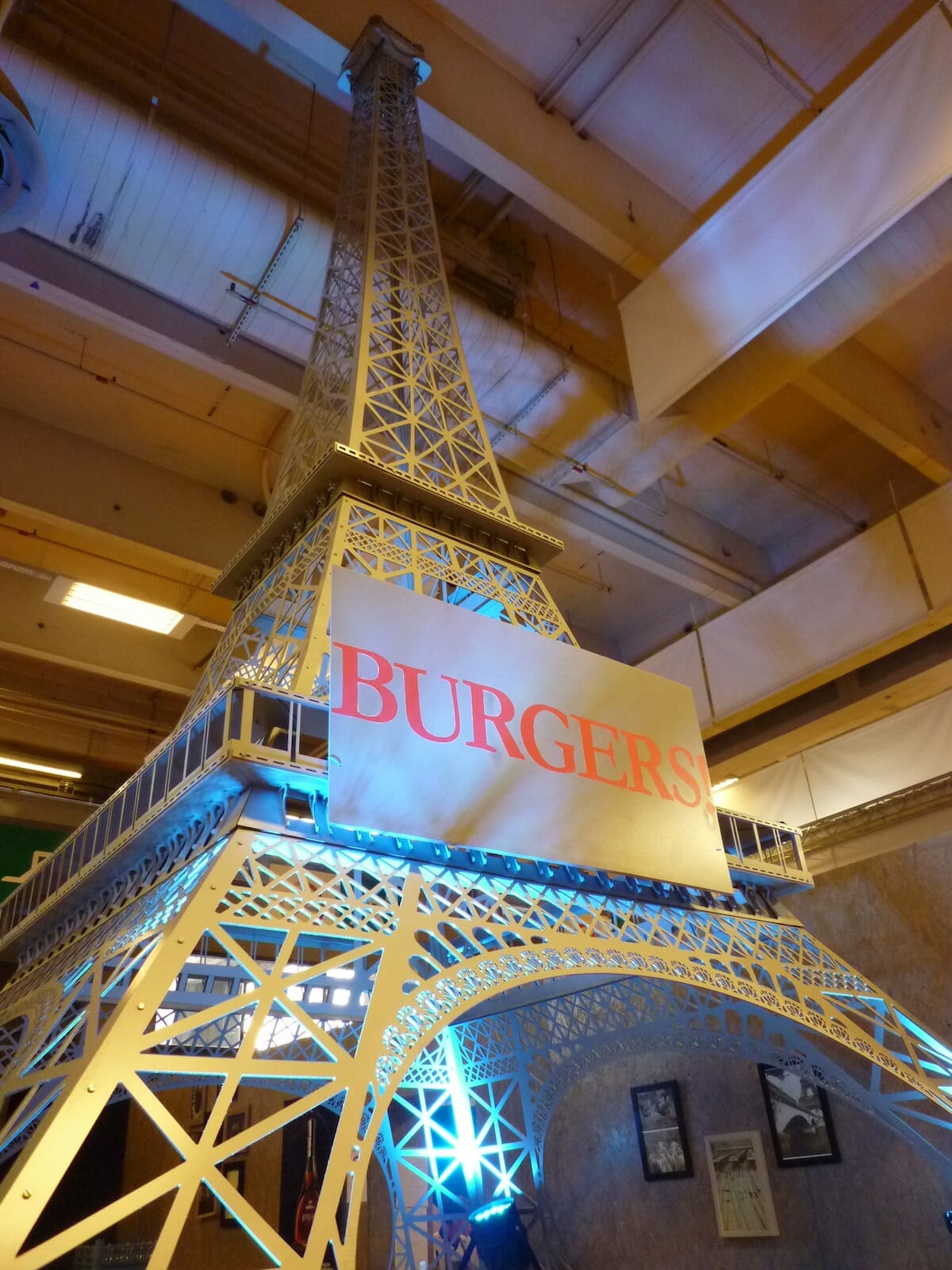