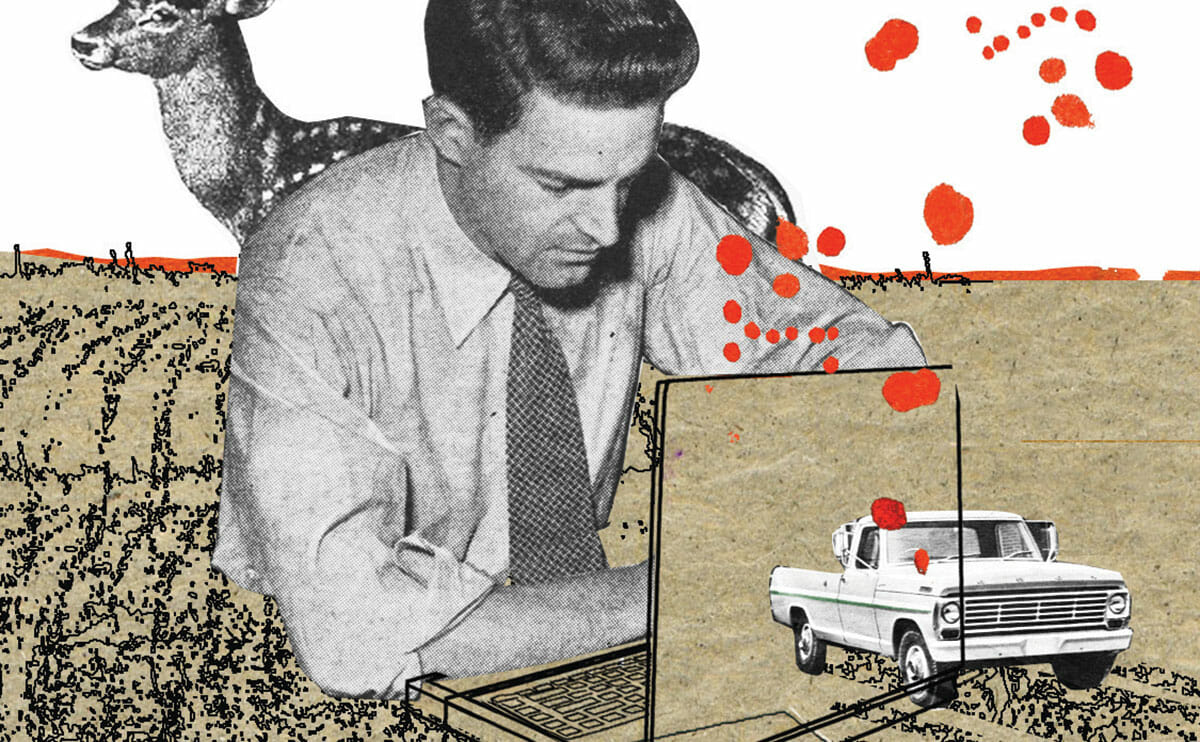 A year ago, I escaped New York City. My family and I settled on the dirt road where I grew up in Pennsylvania, with a view that swept east over snowy fields and a swamp, to a stretch of blue hills known as the Endless Mountains. It was an ideal place to finish writing my book, a rural mystery novel set in a fictional Pennsylvania county.

To make ends meet, I worked with a contractor who specialized in timber-frame outbuildings and farmhouses. On my first day, he took me to the oldest standing house in the township. Digging in the stone foundation, I would find the odd bone and ancient shoe sole. Not shoes, just the soles. Every time I found one, I would get an eerie sense of a bygone, hardscrabble life drifting into my easy and disposable existence. This feeling, known to me since childhood, can be found in a heady subcategory of fiction known as rural noir.

Rural noir, a genre that often straddles the imaginary line between literary and crime fiction, is filled with old family grievances, violent struggles against poverty and fate and the occasional wild exaggeration. It evolved from Southern and Midwestern writers like William Faulkner, Ernest Hemingway and Flannery O’Connor. Today, in an America increasingly gathered around metropolitan centers, rural noir feeds a growing fascination with what’s happening beyond the exurbs.

While I grew up in Pennsylvania, my own winding course through rural American fiction began in Oxford, Mississippi, with a first edition of a plain-looking 1991 novel, titled “Joe,” by Larry Brown. In Brown’s work I found chair-wielding barroom brawls mixed with a deep, underlying sweetness and humanity. Reading his books broadened my idea of what suitable subjects for fiction could be, and re-attuned me to the ramshackle beauty of my childhood home far to the north.

Rural noir is a genre filled with old family grievances, violent struggles against poverty and fate – and the occasional wild exaggeration.

Many writers of rural noir were inspired by lives lived beyond the city limits. O’Connor herself lived on a farm and raised peacocks. Her darkly comic tales set the tone and mood for many writers to come. Alice Walker was the daughter of Georgia sharecroppers, and her 1982 novel, “The Color Purple,” offered a harsh depiction of rural African-American life. Missouri Ozarks writer Daniel Woodrell, whose work stretches back to the eighties but is best known for the spectacular 2006 novel “Winter’s Bone,” gives literary and crime readers a common experience of the rural underbelly.

“When I first started out, there was no such designation as ‘rural noir,’ ” says Chris Offutt, author of the indispensable 1992 collection “Kentucky Straight.” “I had a hard time finding contemporary work set in the rural environment. I was trying to portray the world I’d grown up in: a former mining community in the hills of Kentucky, surrounded by the Daniel Boone National Forest.” It was a world of dirt roads and woods, where, Offutt says, “people were tough, smart and resourceful.”

The paucity of the rural fiction Offutt describes is reflective of a changing nation. Over the course of the last century, the American countryside has been emptying out. Young people migrated to metropolitan areas while the older generations faded. The U.S. Interstate system bypassed the places in between while agribusiness crowded out family farms. The organized drug trade reached far into the heartland. These developments live in the work of Bonnie Jo Campbell, who was raised on a Michigan farm. Her 2009 National Book Award”“nominated story collection, “American Salvage,” explores the rusted edges between country and city, where drug addiction and crime have spread. To 21st-century readers, rural America has become exotic and exciting – and now, separate enough to require its own genre.

As the countryside grapples with these changes, rural fiction is becoming darker and more violent. Frank Bill’s 2011 story collection, “Crimes in Southern Indiana,” in which dreadlocked metalheads cook meth and kill each other in family feuds, exemplifies this new intensity. Steve Weddle, author of the 2013 novel “Country Hardball,” says it’s important to remember that these fictional representations can easily become sensationalized, and questions portrayals of the country that “either don’t get how brutal that life is and romanticize the living-off-the-land cliché, or go the other way and make that life sound like a death sentence.”

Ace Atkins lived on a Mississippi farm for 11 years, finding inspiration there for his bestselling Quinn Colson series. Atkins’s hill country sheriff has contended with the drug trade, gunrunning, human trafficking and, in an oddly touching scene in his latest novel, a large-scale turnip theft. “For me it was a good thing, a therapeutic thing to be able to work on a book, and then till the soil,” says Atkins. “You’re so isolated and attached to your desk, but then you can go out and watch everything grow.”

Farther northwest, John Straley’s appealing Cecil Younger series is set in and around Sitka, Alaska. “It’s gloomy, wet and rainy,” says Straley of his locale. “It has a built-in noir feeling.” It’s also not exactly rural – he paints a picture of crowded small-city life surrounded by sweeping wilderness, where a whale or grizzly bear might easily interrupt the evil that people do.

“Rural life has just as much of that dark mood and atmosphere as anything in urban America,” he says.

It’s a mood I can easily sink into when, walking deep in the woods, I happen upon a stone foundation to a long-lost building or a campfire still smoldering; or when I consider my neighbor’s prized flintlock musket, with its aftermarket trigger guard of whitetail antler, patch box cover of moose antler and butt plate of elk bone – what a murder weapon that would be! In such moments, I am alive to the thrill of something ancient and weird persisting on, pulling me just out of step with contemporary mainstream life.