It's hard to believe, but seed planting hasn't changed much in the last century. But as John Deere and Monsanto move big into precision farming, high-tech solutions may be shaking all that up. 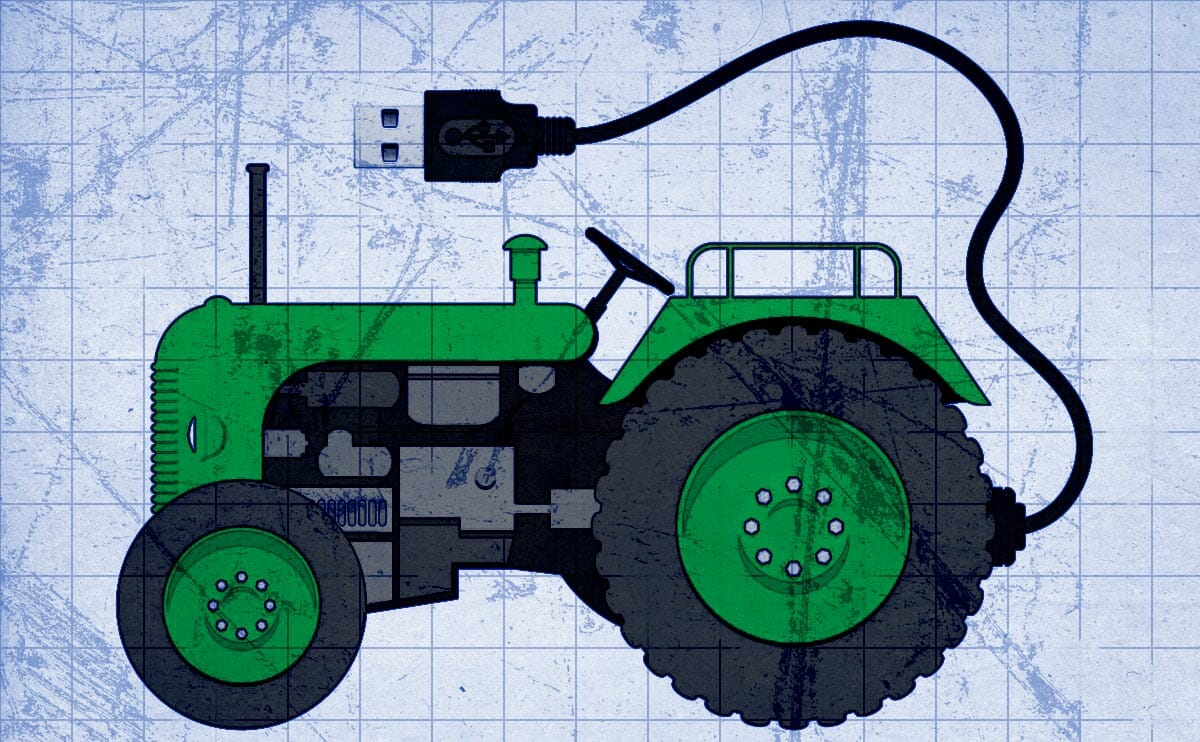 It’s hard to believe, but seed planting has remained much the same for the last century. To understand their fields and where to plant, farmers have relied on historical documentation. From the 1940s up until the 1970s, universities and the USDA sent members of their agronomy departments (sometimes students) out to local farms. These farm scientists would walk through the fields with an aluminum tube that had a sharp point on one end. Picking about fifteen key places in each field (depending on its size), the agronomist would push the tube into the soil and collect a sample. Back at the lab, the samples would be analyzed and the field would then be mapped, on paper, detailing the chemistry of each field.

“It was a manual task. They drew maps that were approximate to how the glaciers and the wind left the soil in the first place,” says Ted Crosbie, head of integrated farming systems at Monsanto. “They did a visual appraisal and they could see three or four basic soil types in a field. As a farmer, if you wanted to know what they were, you would go into your local county extension office, and it was staffed by a state university member and they had all the maps.”

For the most part, planting has been done based on simply knowing the field. Information is passed down through generations. One field is more productive than another and everybody just knows that.

For the most part, planting has been done based on simply knowing the field. Information is passed down through generations. One field is more productive than another and everybody just knows that. Farmers that really want the details of the ins-and-outs of their soil can hire someone to come in and sample their soil, but it’s an expensive undertaking. “A lot of farmers don’t do it. A lot of farmers will say their ground is the same from one end of the field to another,” says Stacey Pellett, a customer and channel experience manager at John Deere.

But the reality is, soil is much more complex than history leads us to believe. The chemical makeup of a field can change in less than a foot. And getting the data is only half the battle. Once you know how a field differs from foot to foot, you have to have the equipment that can understand these differences and implement change. In the last five years, a new way of planting has popped up that uses high-tech mapping, organization, and planting. Called precision farming, it’s an enormous leap forward technologically from the age-old paper maps.

In the last few years, both John Deere and Monsanto have entered the technological fray. Each has created a suite of software and hardware systems that connect to tractors and allow farmers to understand their soil foot-by-foot. It’s a tech battle in which everyone is, literally, getting their hands dirty.

“On an acre of ground we’ll start to map out what it looks like. We’ll understand the soil type, the soil nutrient profile, how much phosphorus, potassium, nitrogen, lime, boron, all the elemental nutrients that are in it. We will then understand what crop was grown on it last year, how much it yielded and what crop we plan to grow on it next year. Then we can understand what that crop rotation should be and how much water the crop needs. Then you can start to design your farming plan around it,” says John Deere’s Pellett.

Each company offers roughly the same services: Software that not only tracks and analyzes the soil makeup, the crop yield, the water and fertilizer needs of each plant, but also organizes it into a system that helps a farmer make a plan for future planting. The systems also equips tractors with GPS that allows the machine’s on-board computer to drive itself across a field and plant seeds or apply fertilizer ideal for each specific location.

In other words: The entire process of planting, fertilizing, and watering is not only highly specific, it’s also now automated.

“The benefit of precision farming is we can tell you exactly what variety of seed was put on the field, what it was planted with and when, what kind of bugs and weeds it encountered, all that information is documented,” says Pellett. “Later you can go back and if an area of the field doesn’t produce very well you can figure out why not. And then you can do analysis to figure out how it can do well.”

It will take a few more years before farmers have detailed numbers about how much they are benefiting from the precision approach (though Monsanto estimates that, though every farm is different, they’ve seen about 10 to 20 percent increase on land that uses their tech). And change is always hard — according to John Deere, most of the tractors they sell have the technology already built in, but farmers aren’t necessarily using it.

“It’s very computerized and sophisticated,” says Pellett. “Part of what we’re trying to do now is help our dealers understand the capability of our machines are and turn it into a language farmers can understand.”

Monsanto, on the other hand, says 90 percent of the several hundred farmers they surveyed during their trials last summer before launching their product said they intended to use the tech on at least three-fourths of their land. The next step, says Monsanto’s Crosby, is that the company has started developing “prescriptions” for their hybrid and soybean seeds that can be entered into the computer. Also, in November 2013, the company purchased the weather data-gathering startup Climate Corporation for $1 billion, which will allow them to integrate the company’s vast troves of scientist-driven weather information into their precision tech.

Ultimately, the competition between the two companies seems to be shaping into an Apple vs. Google-style tech war – a version of the Microsoft v. Apple debate, about the virtue of open versus closed systems. John Deere is Apple, selling physical technology with their proprietary software built-in, while Monsanto is Google, selling software-as-a-service that farmers can download to their tablets and computer-controlled tractors. (One CNBC story likened Monsanto to Windows, but same difference.) In the end, just like the Apple vs. Google war, the end user wins as tech companies generally compete to outdo each other, improving the overall usefulness and innovation of the services.

It’s a new, disruptive technology and eventually — like fertilizer and mechanically powered tractors before it ”“ adherents believe the system will catch on. And with the change, come familiar Big Data issues, like concerns over privacy with precision farming. But many farmers are bullish about the potential. According to Pellett: “On behalf of our family farm, we do precision farming because its critical to us that we take care of the land so that it can continue to produce for generations to come. My husband is a sixth generation farmer on both sides. In order for there to be a tenth generation we have to do what’s right by the land. We do that by understanding the land and precision farming enables that.”

Popular
The Fertilizer Shortage Will Persist in 2023Shea Swenson
7 Smokable Plants You Can Grow That Aren’t MarijuanaBrian Barth
Agricultural Runoff Pollutes Well Water, a ‘Public Health Crisis In the Making’Madison McVan, Investigate Midwest
Move Over, Mezcal. A Sustainable Tequila Alternative Is Taking Over.Hollie Stephens
Why Don’t We Eat Turkey Eggs?Dan Nosowitz
Explore Modern Farmer
Related
Features, Food Security, Labor
The Rise of Virtual Farmers MarketsLeah Borts-Kuperman
Environment, Labor, Water
California Farms and Farmworkers Attempt to Recover From Record FloodsNaoki Nitta
Aquaculture, Technology
Can Interactive Mapping Tools Guide Shellfish Restoration?Bridget Shirvell
Food Waste, Opinion, Politics, Technology
How Solar-Powered Refrigerators Could Cool Down Climate ChangeAbay Yimere
wpDiscuz
We use cookies on our website to give you the most relevant experience by remembering your preferences and repeat visits. By clicking “Accept”, you consent to the use of ALL the cookies.
Cookie settings ACCEPT
Privacy & Cookies Policy