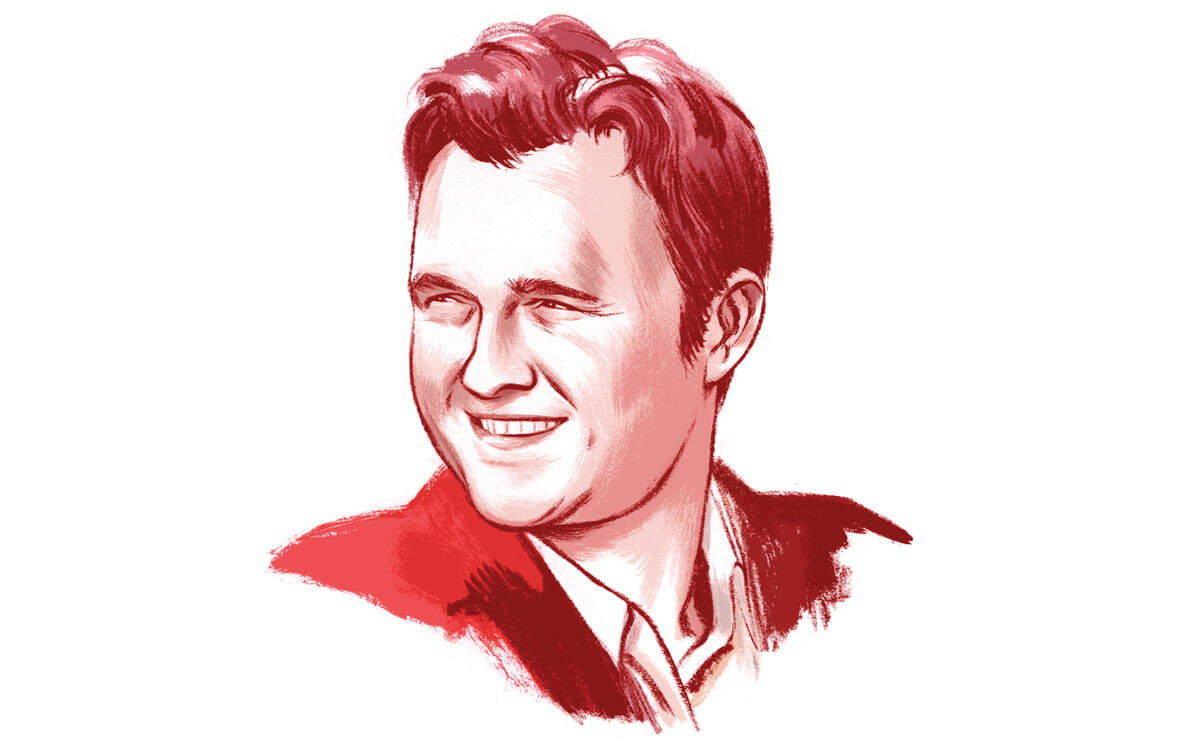 Unexpected, maybe, but the appointment makes sense. JØrgensen, 38, has represented Denmark in the European Parliament since 2004, serving as vice chair of the Committee on Environment, Public Health and Food Safety. He’s also a lifelong animal welfare advocate; as a child, he wanted to be a veterinarian.

For one of the smallest countries geographically (almost 230 times smaller than the U.S.), Denmark’s agriculture sector has an outsized global presence. The country’s organic farms have experienced unparalleled growth – an average of 22 percent per year since 2003 – while exports of its high-end meats and produce are also spiking. It doesn’t hurt that Danish farm-to-table is one of the world’s most admired cuisines (see: Noma).

Still, JØrgensen, thought to be the youngest ag minister in the world, sees much room for improvement. Denmark has four times more swine than humans,making pig treatment high on his list of concerns (he is often pictured cradling wee pigs). The country is also the biggest mink exporter in the world, and JØrgensen has big plans to shape up the industry – though he’ll have to do so with the help of Denmark’s parliament. “I still have the same strong opinions I’ve always had,” he says. “Now I need to build consensus.”

JØrgensen carved some time out of his schedule to talk with Modern Farmer about Nordic cuisine, his love of animals and how Denmark trounces most countries in sustainable farming. 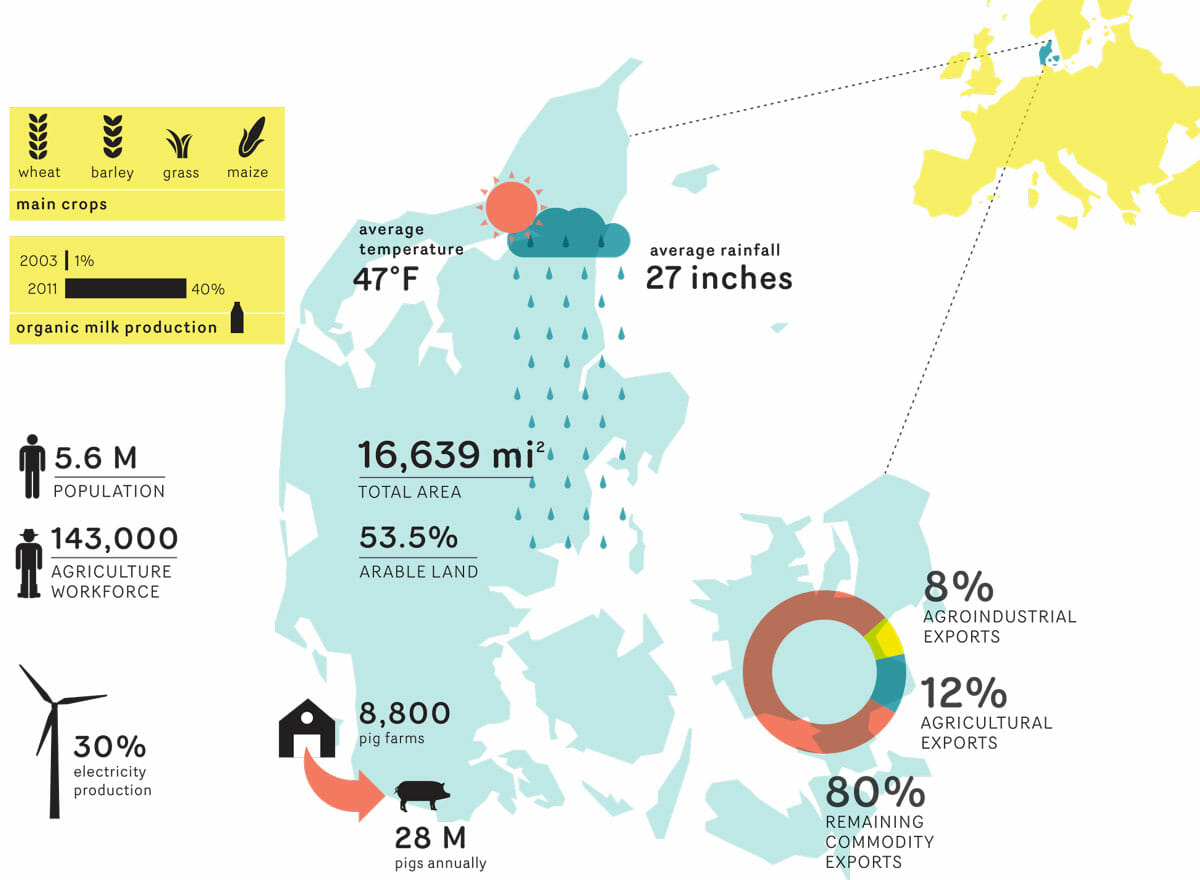 Modern Farmer: What is your background in agriculture?

Dan JØrgensen: I grew up in the country, and always felt connected to animals. Actually, as a boy I wanted to be a veterinarian but something went wrong. Not sure how I ended up in politics [laughs]. Recently my background is more environmental than agricultural. But Denmark is such an agriculturally intense country – most of our environmental policy revolves around agriculture. It goes hand in hand.

MF: Would you say Danish farms are clean?

DJ: Denmark has quite strict regulatory systems in place. We’ve made our farms cut emissions and use less fertilizer and pesticides. This has made our farmers be innovative and efficient, because they have to be. It’s fair to say we’re a leader in this area. We’ve managed to both increase economic growth and decrease pollution.

MF: How about animal welfare?

DJ: We’re one of the best countries in the world with this. Even our conventional animals are at the level of organic in other countries. But we want to be better. Animals are sentient beings; they can feel stress and fear and pain, and we should never forget that. This is a personal cause for me – hopefully, where I’ll bring the most change.

MF: Can you be more specific?

DJ: We are a country with only 5.5 million inhabitants, but we produce more than 28 million pigs each year. We obviously bear a large responsibility to our pigs: to treat them well. Right now the laws say that sows can be confined to a stall 55 percent of the time. We’d like to reduce that to 20 percent.

MF: What do you think the U.S. and China can learn from Denmark in terms of humane treatment for animals?

DJ: In Denmark, the authorities keep a constant focus on the possibilities for improving animal welfare. This is done by means of an ongoing dialogue and cooperation with industry and stakeholders. One concrete example is loose housing of farrowing sows: Instead of making a new law that would be difficult to implement, a voluntary scheme has been made that gives farmers an economic incentive to improve animal welfare.

MF: Denmark is the biggest exporter of minks in the world. What are your thoughts?

DJ: This appointment was controversial because of my views on the mink industry. It was easier to be outspoken in the E.U. parliament, just arguing against a right-wing agenda. Now that I am agriculture minister, I’ll need to find compromise.

The mink sector is very important economically, and it’s obviously a sensitive issue. But minks are fragile and intelligent animals, and I want to make sure we treat them with respect. People will argue that by definition, fur is not a very animal welfare”“attentive sector. But if you look at what has been done here in the last couple of years, there’s no doubt our standards have improved significantly. I know we can do even better

DJ: You’ve heard of the New Nordic Kitchen, yes? This is for us a tremendous branding possibility. Everybody who’s interested in gourmet food and new food trends knows that Denmark has some of the best restaurants. This is built on ideas of quality and also sustainability.

MF: Why do you think your country is having its moment in the global-dining spotlight?

DJ: We have incredible entrepreneurs and idealists among our chefs. We are simply lucky to have them in Denmark. I owe them – and the Danish people owe them – a great deal of gratitude. But chefs can have all the ideals in the world and it won’t do any good without good farms.

MF: How does Danish farm-to-table compare with, say, the U.S.?

DJ: I visited a farm outside Seattle this summer that was just fantastic, making food I would have been proud of. But this is not typical. In the U.S. the vast majority of farms are big, factory operations. Denmark is not like this.

MF: We have to ask: Have you eaten at Noma?

DJ: Not yet! I’ve been sleeping only three or four hours a night since I took this job. I have many things to learn, and I’m trying to see my girlfriend and friends now that I’m back in Denmark. But I would very much like to visit Noma.

Dan JØrgensen grew up on the rural island of Funen oï¬€ the coast of Denmark, where he cultivated a love for farming and animals. After studying political science at the University of Washington, JØrgensen obtained his political science masters degree from Aarhus University. for the last seven years, he vice chaired the committee on Environment, Public Health and Food Safety in the European Parliament. He has written multiple books on the environment. JØrgensen was appointed Denmark’s minister for food, agriculture and ï¬sheries in December 2013.