From Egypt to Ecuador, Bhutan to the Bayou, there's no food more universal than rice. So in New York City - home to 3 million foreign-born residents - what crop would you use to educate kids about agriculture? 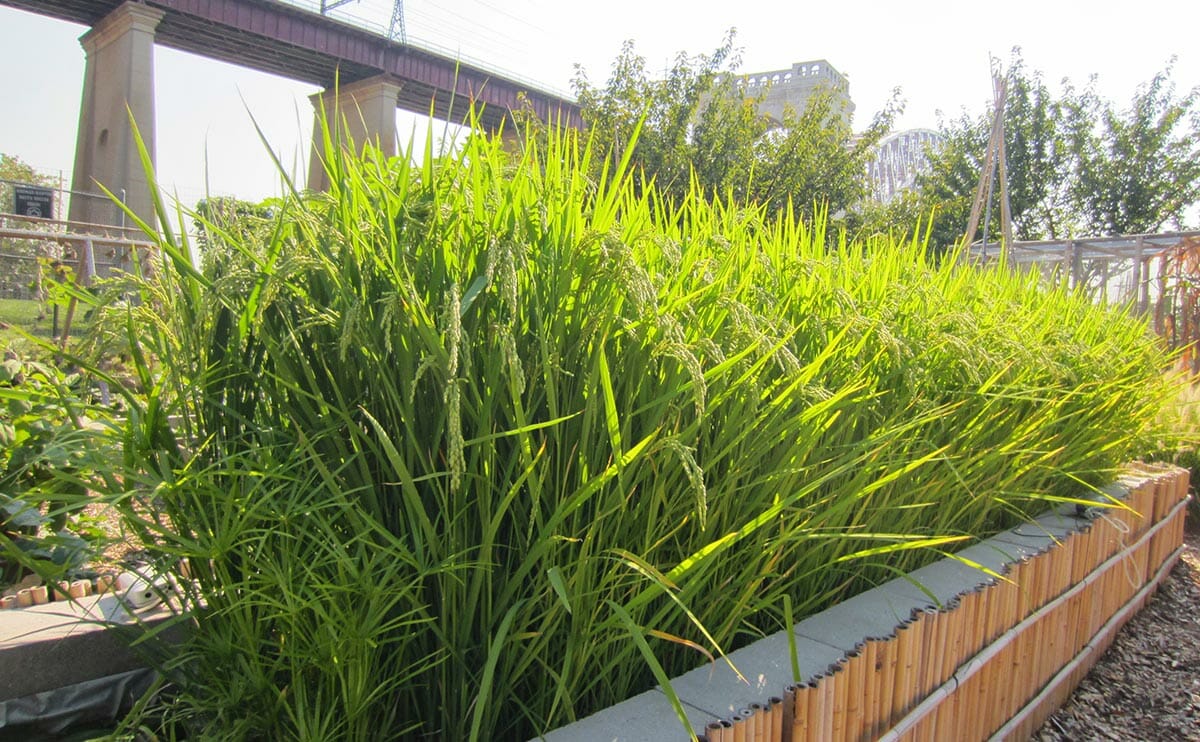 You’d be hard-pressed to think of a more relatable food, one consumed by as many of New York’s populations. At the Randall’s Island Urban Farm, under the shadow of the Hell’s Gate Bridge, 3,000 city students learn about agriculture every year — and rice seems like an obvious centerpiece.

That is, except for the growing conditions.

For one thing, there’s none of the marshy terrain that makes rice farming a natural fit in Thailand and Vietnam. For another, New York’s temperature is chillier than rice’s customary climes.

But for farm manager Nick Storrs, it was important to give kids exposure to how one of their staple foods is grown — even if it’s hard to pull off. “We’re right up against East Harlem and the Bronx,” he says. “These kids are eating a lot of rice, but have no idea where it comes from.”

Storrs is pretty sure this is the only rice grown in NYC, and the farm is one the few places growing it in the Northeast. U.S. rice cultivation is mostly limited to small swaths of Northern California and the Southeast. Most North American schoolkids have likely never seen a living rice plant.

Storrs started tinkering with rice three years ago. First, he needed to choose the right variety. The indica strain depends on intense heat to reach maturity. Japonica rice, on the other hand, reaches maturity based on seasonal day length. Turns out, New York is on roughly the same latitude as Japan (where much japonica is grown).

Storrs says New York’s climate is “not not a problem”: The window of temperate growing time won’t naturally bring rice to maturity. So — like other Northeastern farmers who’ve been experimenting with rice — he starts rice seedlings in greenhouses, in March. They fully develop indoors before being moved to the paddies in June.

Now, about those paddies. They’re housed in raised beds, using cinder blocks left over from the construction of a huge sports stadium. The blocks are stacked in trough formation, about 26 inches tall, lined with thick painters’ tarp to prevent seepage — they need to retain lots of water.

They could have built paddies in the ground; Randall Island’s soil has been tested for heavy metals and the like. Still, Storrs wanted to take no risks. “This is something we’re feeding to kids,” he says. “I’d rather bring in soil and compost we can feel 100 percent comfortable with.”

Another concern was water: Rice uses so much of it, but can they trust the stuff flowing from municipal pipes? At a recent rice-growing workshop, Storrs told his (adult) audience that the rice grows well, despite the use of city water. One audience member called out “New York’s got the best tap water in the world!” and proceeded to discuss bagel and pizza lore.

Randall’s Island has now scaled up from one to four raised-bed paddies. The farm isn’t producing a groundswell of rice, but that’s not really the point. Thousands of visiting students get to see firsthand how their food is made.

Rice certainly isn’t the only crop grown on Randall’s Island — roughly 200 items are grown on the farm. They grow many types of peppers (another food that spans many cultures), eight types of tomatoes, and quirky items like luffa (source of loofah sponges) and tulsi (an Indian plant used to make tea).

Since the first year, there has been a good degree of trial and error. For aesthetics, Storrs and crew affixed bamboo stalks to the outside of the cinder blocks. But after repeated flooding, the bamboo began to rot. They removed the stalks, which caused an alarming chain reaction: The missing bamboo left big trenches in the ground, and the blocks started sinking and tipping over.

“That was an exciting afternoon!” recalls Storrs. “We ended up bracing (the raised beds) with two by fours. This whole experience has taught us a lot.”

At the end of the growing season, the Randall’s Island farm hosts a harvest feast. Kids are given a chance to thresh and winnow rice, the final stage before eating it. Storrs loves exposing so many students to their food’s origins.

“When they first see the rice plant, most kids can’t even tell us what they’re looking at,” he says. “But whether they’re originally from Korea, Africa or Georgia, this is what they’re eating with their families.”