The new Meat Atlas, from a pair of European non-profits, is stacked full of interesting information about the future of meat consumption -- and lots of beautiful maps. Here's four of our favorites. 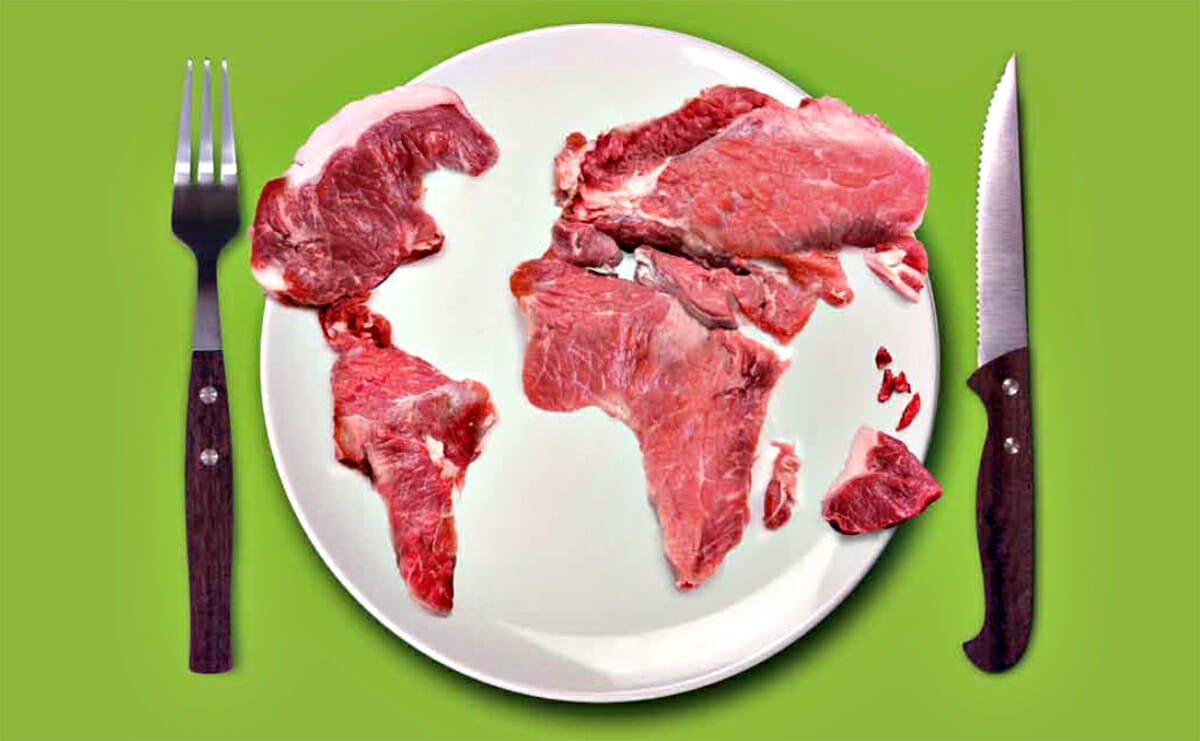 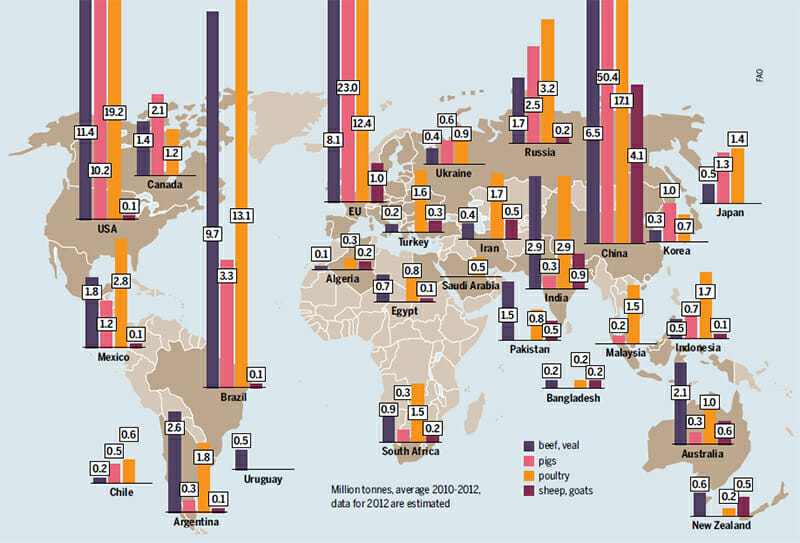 Meat production is up worldwide, but not in the expected ways or places. As a global trend, chicken and pork are taking up a larger share of the world’s meat supply while lamb and beef herds decline. The reason? As the world moves toward practices of industrial agriculture, it needs animals with a high feed efficiency that can be fit into small spaces. Birds and pigs fit the bill.

During Sheep Week, we at Modern Farmer wrote much about the perils of lamb, but I had a hard time believing the global decline of beef production reported in the atlas. While the U.S. remains the world’s largest beef producer, the industry expects a 4 to 6 percent decline in production numbers over 2013. Other big-time beef producers like Brazil and Canada are also bringing less meat to market.

India, strangely, is a bright spot for the beef industry, as buffalo meat production has doubled between 2010 and 2013, making the subcontinent the world’s largest beef exporter.

So as world meat production doubles by 2050, expect to hear much more oinking and clucking than mooing and baaing. 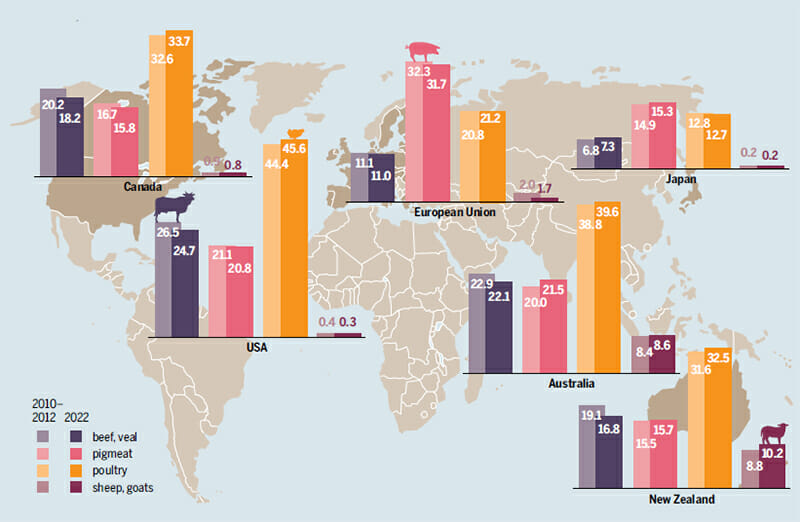 Has the developed world reached peak meat? In the U.S., meat consumption dropped 9 percent from 2007 to 2013. Germans ate 5 pounds less meat per person in 2012 than they did into 2011. The industry blames it on a cold summer killing the barbecue season, while others point to trending low-meat diets and health concerns. Whatever the cause, meat consumption patterns leave the rising demand to the developing economies of India and China. 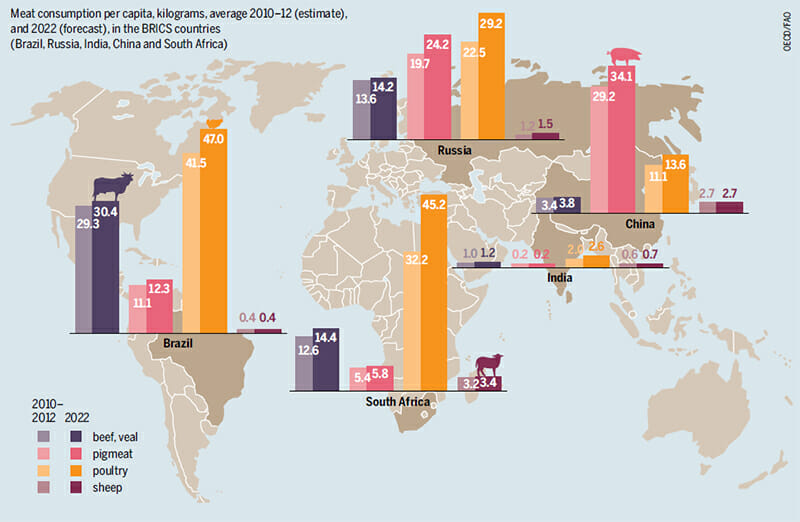 A rise in population and rapid urbanization has driven and increasing demand for meat in the so-called BRICS (Brazil, Russia, Indian, China, and South Africa). Between 2003 and 2012, their meat consumption rate rose 6.3 percent a year, and is expected to keep growing at a steady pace through the decade.

To meet the demand, says the atlas, “factory farms, similar to those known in the industrialized world since the 1950s, will have to be established everywhere.” Those future farms will require an enormous increase in feed grains like soybeans, which will have to double in yield by 2050. 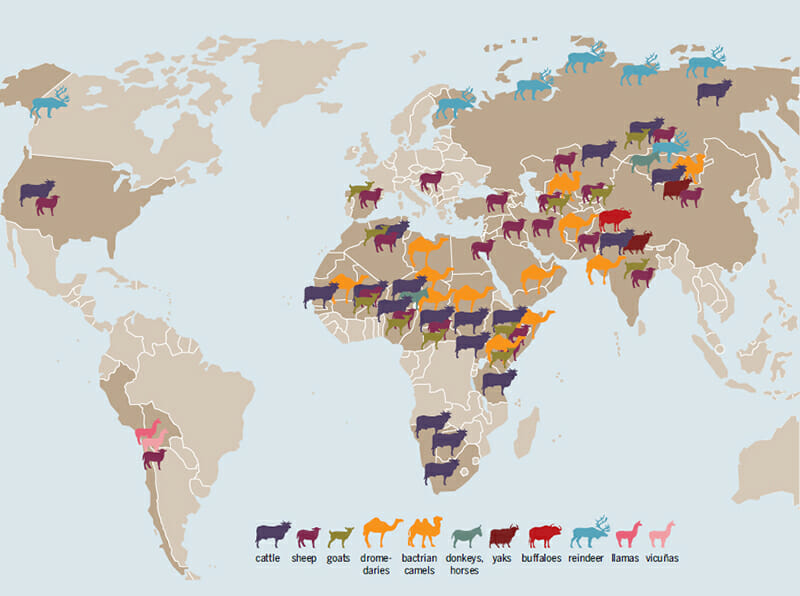 Animal husbandry, by countries and main species. Data via FAO.

All told, the shifts are leading to huge changes in the ways the world raises animals. The atlas identifies two groups — smallholders and pastoralists — that could drown under a wave of industrialized animal husbandry, even as their methods hold the promise of a healthy environment. Smallholders are farmers who raise a small number of animals in conjunction with a small number of crops. Pastoralists, better known as herders, tend to specialize in converting scrublands into animal protein through migratory herding. The atlas recognizes a fair amount of overlap between those two groups.

Future demand for meat might not mean a complete embrace of industrial methods. Radical ideas — like cricket farming or lab grown meat — could play a role in meeting skyrocketing demand for animal protein. But time and again, the beautiful maps in the meat atlas beg a single question: Is cheap meat really worth it?