In Grizzly Country, What Do You Do With a Dead Cow? - Modern Farmer
Animals, Plants

In Grizzly Country, What Do You Do With a Dead Cow?

To keep grizzly bears away from cattle ranches, you need a very special boneyard -- and a lot of electric fence. 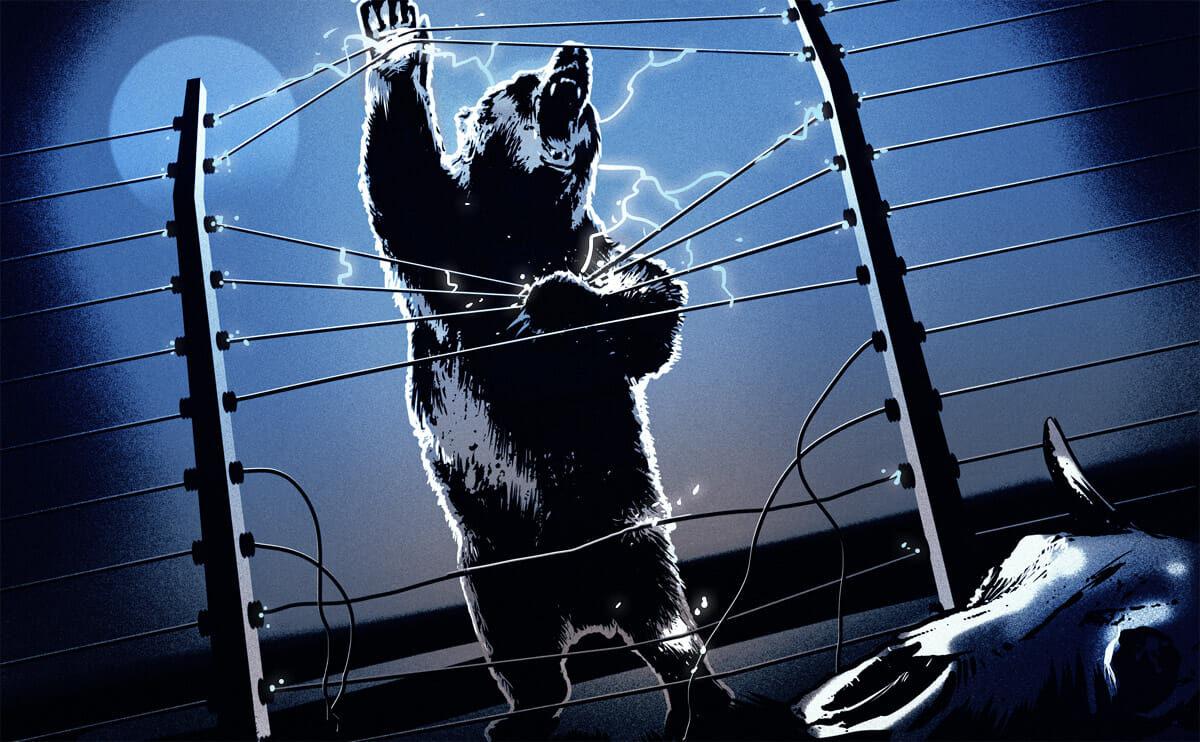 But the bones, and the faint odor of rotten meat, reveal the truth: we’re looking at the carcasses of up to four hundred head of livestock, slowly decomposing into compost. This heap of decaying cattle isn’t just improving the bottom lines of ranchers like Iverson – it’s also protecting a threatened species.

Since 1975, Iverson has run cattle in the Blackfoot River Valley, a slice of northwestern Montana that lies on the fringe of grizzly bear country. Ranchers who share their land with grizzlies face problems that other producers don’t. For example: what do you do when livestock perishes on the range – when, say, a calf succumbs to pneumonia, or a cow dies giving birth?

In bear country, dead cows can lure grizzlies onto ranches – and into potentially dangerous conflict with livestock and people.

In other places, those carcasses get carried off to the ranch’s boneyard. But in bear country, dead cows can lure grizzlies onto ranches – and into potentially dangerous conflict with livestock and people. According to one study, unmanaged boneyards more than double the likelihood of clashes between humans and bears. “We used to haul everything up to the boneyards, and that just sucked the predators in,” says Iverson. “You have to keep bears from getting a free lunch.”

Grizzlies that hang out around humans also become menaces to themselves. This year, eight “problem bears” – animals that were deemed hazards to public safety – were euthanized in northwestern Montana, and another nine were put down in the lands around Yellowstone. Considering that just 1,500 grizzlies roam the lower 48 states, keeping bears out of trouble isn’t merely a ranching problem – it’s an important conservation issue.

That’s where the woodchip piles come in. In 2003, a coalition of ranchers and landowners called the Blackfoot Challenge began working with state and federal agencies to collect and compost dead cattle. Now, when an animal dies on the property of a participating rancher in the Blackfoot River Valley or nearby Granite County, a driver stops by with a truck and carts the animal to Clearwater Junction, west of the town of Ovando, to be interred in woodchips at a bear-resistant central facility. (Carcass pickup occurs twice a week during calving season, when deaths are most frequent, and by appointment the rest of the year.) When the compost has finished cooking after sixty days, the Montana Department of Transportation uses it in highway-side revegetation projects.

According to Seth Wilson, biologist at the Blackfoot Challenge and co-founder People and Carnivores, one of the project’s funders, the composting program now collects over 600 carcasses per year, and has picked up as many as 5,000 since its inception. “If you keep it well-watered, it’s very low-odor,” says Wilson. “When we first got started, everyone was like, is this going to be a total mess? But it’s pretty contained.”

There have been hard-learned lessons. One weekend a few years back, a horse carcass was dropped off at the facility but not buried in woodchips, creating a beckoning aroma. Department of Transportation workers showed up on Monday morning to find a half-eaten horse – and a frantic female grizzly prowling the yard. Because she’d been shocked by the electric fences on her way into the compound, the bear was in no mood to try the fences again, and too distraught to be herded through the open gates. Finally a state biologist, armed with a tranquilizer gun, volunteered to crouch inside a bear trap and wait for the animal to run by. At last, he got a clean shot. The bear was relocated far from the compound, never to return.

Only twice in the last ten years has a large carnivore breached an electric fence installed by the Blackfoot Challenge.

Such incidents, says Wilson, are exceedingly rare: only twice in the last ten years has a large carnivore breached an electric fence installed by the Blackfoot Challenge. The group’s many initiatives – including electric fences around calving grounds, orchards, and beehives; bear-resistant garbage cans; and a network of neighbors who keep each other updated on wildlife activity – have reduced conflicts by around ninety percent.

That success has caught the attention of other ranchers. “They’re the icons,” says Dick Hardy, co-founder of the Drywood Yarrow Conservation Partnership, a coalition of Canadian ranchers that has started a dead stock pickup program of its own. “Seeing how Blackfoot Challenge handles things has really charged our own batteries.”

Not only does composting benefit bears and people, Wilson says it’s also cost-effective, thanks to the groups and agencies that share expenses. The US Fish and Wildlife Service provides the truck and the fuel. The Montana Department of Transportation maintains the composting facility. Jamie Jonkel, a biologist with Montana Fish, Wildlife, and Parks, picks up carcasses during the summer. Ranchers donate out of pocket. Put it all together, and the program costs only $22 per carcass – about a third of what it would without partners.

Still, Iverson and Wilson would like to see conservation groups take on a larger share of the funding burden. It might be a tough sell: although relations have improved in recent years, ranchers and environmentalists regularly clash over issues like the reintroduction of wolves. Yet Iverson believes the composting program is that rarest of beasts – the win-win. “Ultimately it has to be a partnership between the ranchers and the animal lovers,” he says. “Predators are an added cost to our business. We accept that they’re here, but we need help dealing with them.”

This story was funded in part by a grant from the Solutions Journalism Network, a nonprofit organization dedicated to reporting on responses to social problems.

Popular
How to (Actually) Get Rid of Fruit FliesEmily Baron Cadloff
7 Smokable Plants You Can Grow That Aren’t MarijuanaBrian Barth
How to Design a Moon GardenLindsay Campbell
6 Differences Between Llamas and AlpacasAndrew Amelinckx
Goat Sex: Everything You Wanted to Know But Were Afraid to AskAndrew Amelinckx
Explore Modern Farmer
Related
Animals
The Unique Struggle of Running a Sheep Dairy in AmericaChristine Clark
How-To, Plants
How to Preserve Your Own FlowersSophia F. Gottfried
Million Gardens Movement
America’s Oldest Continuously Operating Victory GardenFrank Giustra
Plants
Tar Spot Disease Is Plaguing Corn Fields Across the MidwestLindsay Campbell
wpDiscuz
We use cookies on our website to give you the most relevant experience by remembering your preferences and repeat visits. By clicking “Accept”, you consent to the use of ALL the cookies.
Cookie settings ACCEPT
Privacy & Cookies Policy