Why Flower Farmers Pay Attention to the Pantone Color of the Year - Modern Farmer
Animals, Plants

Flower farmers in the United States can use the Pantone color as an edge to compete with the massive flower shipments coming in from South America. 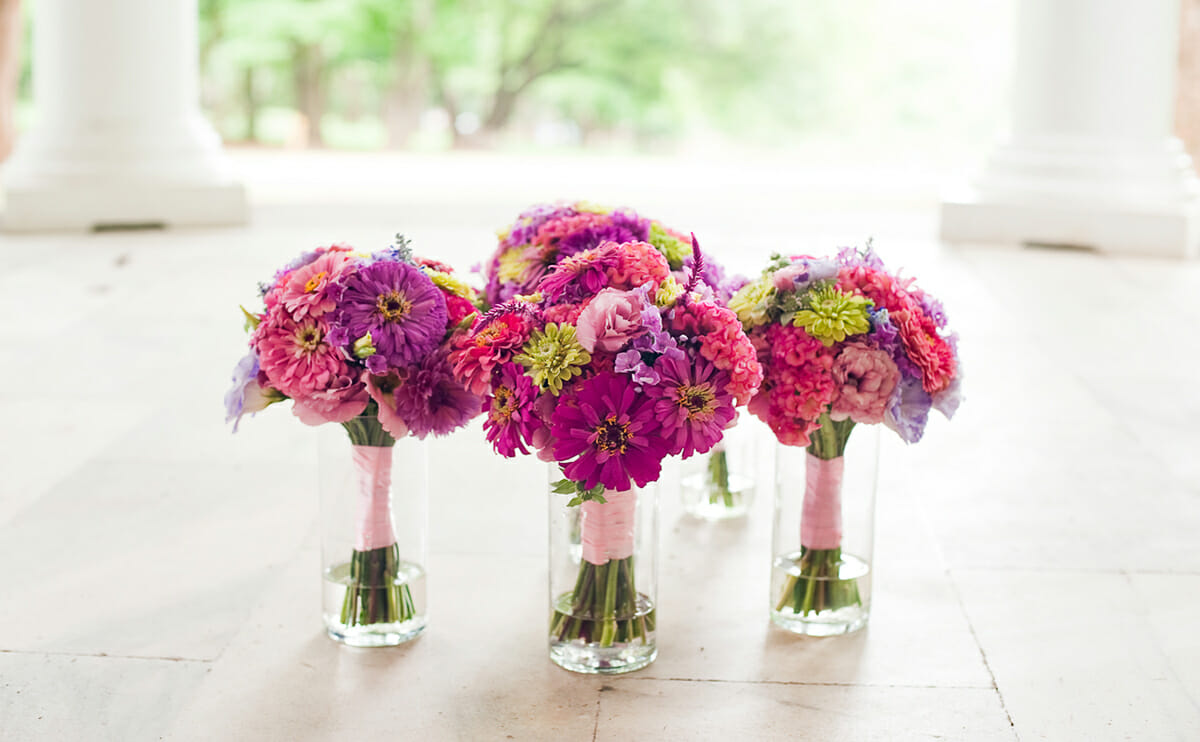 Flower farmers in the United States can use the Pantone color as an edge to compete with the massive flower shipments coming in from South America. Unlike those monoculture farms, local growers have the flexibility to plant the blooms that wedding clients want to see from year to year. The nuance in color and style afforded to growers who live in the same place as their clients is a powerful asset.

To select their designated trendy color, Pantone’s experts travel across the world to observe the moods emerging in all aspects of culture, including film, art, technology, even sports. Every January since 2000, Pantone has announced the color that will, according to their experts, “express in color what is taking place in the global zeitgeist.” Pantone tends to get it right; just one month into 2014, vivid purple is making an appearance in products that were produced long before Pantone announced their color, from Old Navy sweaters to Keurig coffeemakers.

Radiant Orchid was well received among fashion bloggers; “we expect to see this pretty color popping up at plenty of weddings in 2014 – it’s lush and sophisticated, and even though pink and purple are often seen as ‘girlie’ colors, it’s not overly feminine,” writes Huffington Post. The Pantone color is announced each year in the midst of the crop planning season; however, flower farmers aren’t necessarily changing their seed orders to accommodate more purple shades.

Pantone has announced the color that will, according to their experts, “express in color what is taking place in the global zeitgeist.”

Farmers might add an extra planting or two of a purple shade, but as farmer and designer Jennie Love of Love ‘n Fresh Flowers in Philadelphia points out, “Usually the Pantone Color can’t even be found in nature as a true match. Only florists who are willing to dye or spray paint their flowers will be able to offer true Radiant Orchid color in their designs.” But flower farmers also know they have time react to the Pantone Color of the Year for one simple reason: weddings are usually planned at least a year in advance.

Ellen Frost, owner and designer of Local Color Flowers in Baltimore, explains why the Pantone Color of the Year increases in popularity in the several years after it is announced. “The trends take longer to filter down. For instance, the 2012 Pantone Color of the year was Tangerine Tango. In 2013, we saw a huge demand for colors like coral and tangerine, and we’re even seeing a continuation of that this year.”

Frost may expect her clients to request brilliant hues of orchid purple in 2015, but for now, she is ordering coral and peach blooms in the Tangerine Tango palette from her local growers. Other farmers and designers echo that clients are overwhelmingly requesting those soft orange-pinks from the 2012 Tangerine year, saying that “wedding planning takes years to be affected” and “in two to four years they [flower farmers] pick it up.” One farmer even points to the 2011 Color of the Year, Honeysuckle, as the culprit for the current demand for peaches and corals.

For flower farmers, crop planning is about balance – too much of one color might be disastrous, if that color doesn’t sell.

Pantone writes that “Radiant Orchid inspires confidence and its rosy undertones emanate great joy, love, and health.” What can we expect, then, from flower growers in the year 2014? It is unlikely that flower fields will be overwhelmingly grape-colored; however, we are likely to see more modern bouquets with daring, bold flourishes, and weddings with brightly colored accents. Meanwhile, Jennie Love will take the cue from Pantone, with her own personal spin on purple: “I’m planting saturated moody purples because I want to see the color trends shift to dark sexy hues.”

For flower farmers, crop planning is about balance – too much of one color might be disastrous, if that color doesn’t sell. A field of bright red zinnias might supply a farmers market, but very few wedding clients will gravitate towards red in the heat of summer. According to a 2013 study conducted by The Knot, 22 percent of weddings were purple themed: a significant number, but a farm of only purple blooms would be out of luck. Keeping up with the trends, then, can make or break a flower farmer’s success.

Flower farmers should keep an eye on Pantone, and remember that the color trends in fashion and culture may take time to filter into the world of weddings. Successful flower farmers are those that learn to walk the tightrope between Pantone’s zeitgeist, current bridal trends and their own growing season in a delicate balance of finding just the right shade for that special day.