Deer Farming: The Next Adventure in Agriculture

Can a new boom in deer farming bring venison to the masses? 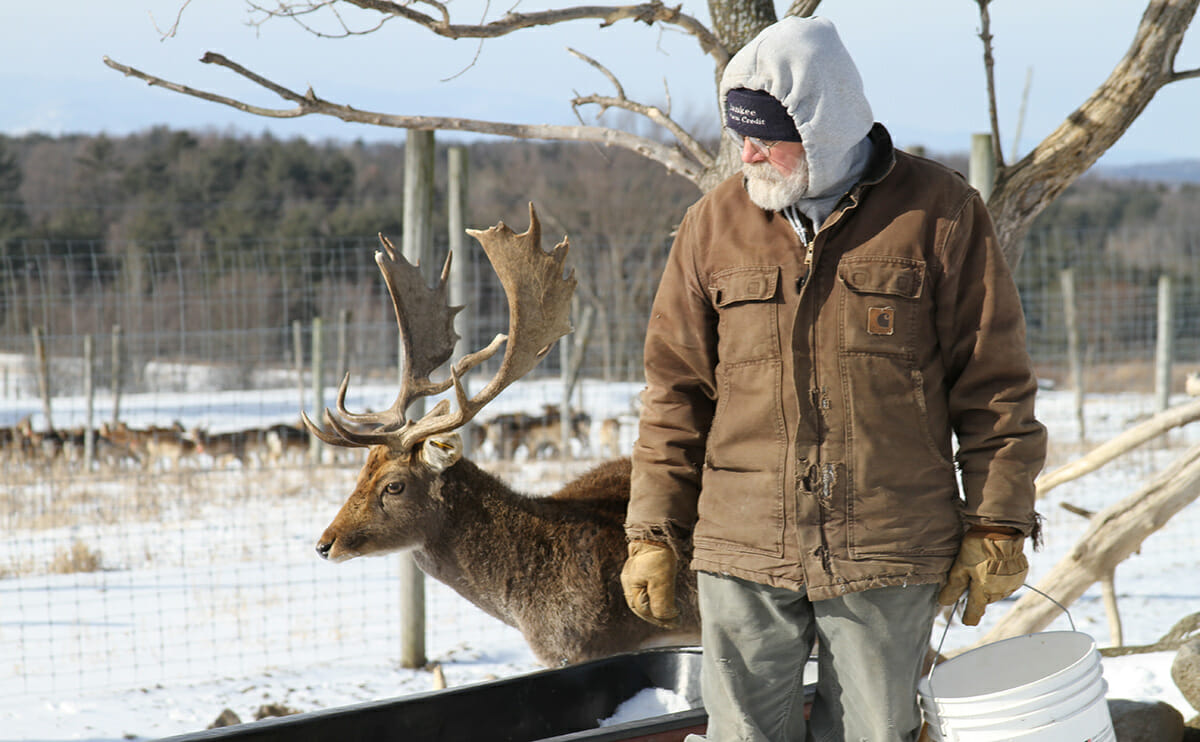 Initially established in the 1970s as a way for farmers to maximize land for profit, deer farming is increasing in popularity. Because deer are adaptable to many different terrains, raising and breeding domesticated deer is a viable way to utilize small tracts of marginal land. There’s also a boom in consumer demand for venison as an alternative to factory-farmed meat. And for health nuts, venison has its own advantages: Like its wild counterpart, farmed venison is a lean meat high in protein and low in fat.

But the U.S. currently produces only 20 percent of the venison needed to supply its domestic markets, according to the North American Deer Farmers Association,. To fill this gap, the U.S. deer market has seen steady increases of 25 to 30 percent annually. In fact, the cervid livestock industry, which encompasses elk, reindeer, axis, sika, red, whitetail and fallow deer, is one of the fastest growing industries in rural America.

Raising a herd of deer can be more profitable than raising traditional livestock. Deer consume less fodder than cattle, are less damaging to pastures, mature more quickly, and can reproduce for up to 20 years in captivity. Farmers can produce a quality herd on a small tract of land because of the animals’ ability to adapt to multiple terrains.

LedgEnd Farm in Middlebury, Vermont is home to approximately 400 fallow deer. Hank Dimuzio, farmer and founder of LedgEnd Farm, is not the typical farmer, choosing to farm in addition to his career as an emergency room physician. Dimuzio and his wife, Rhonda, decided to farm deer because he needed a type of farming that would be compatible with his lifestyle. “Deer are, in essence, a very low care animal,” says Dimuzio.

Primarily browsers and partial grazers, these fallow deer are raised for venison, and also provide a renewable crop of antler velvet, the soft skin on growing antlers popular in Asian markets and thought to provide medicinal properties.

When the Dimuzios began deer farming in 1995, fallow deer were on the decline. Turns out they stepped into the market at the right time, because the couple were able to snag good-quality animals at low prices.

At LedgEnd Farm, fallow deer are kept in four distinct groups: does and older fawns, bucks and breeding bucks (of which currently five breeding bucks are in rotation), spikers (or younger bucks), and another breed that has strong Mediterranean genes. Deer are rotated throughout the property, grazing nearly nine months of the year. Dimuzio grows crops for the herds on the other acres not being grazed.

“Silage and dry bales come off the farm; whole grain corn from my local mill for both a winter energy supplement, trace minerals for general nutrition, and, in the summer, I use corn as a way to bring the deer into the handling facilities,” says Dimuzio.

Because farm-raised deer are a livestock operation, the rules and regulations that apply to livestock like cattle, sheep and pigs, also apply to deer, including rules for handling, slaughter, product labeling and transportation. Specific to cervid livestock, farmers must also maintain herd records for specific issues: Tuberculosis, Chronic Wasting Disease, and Brucellosis. Most states also require an 8-foot-high fence enclosure (a spooked deer will try to jump a fence, but even these strong-legged bounders can’t clear 8 feet) as well as a handling area and animal control area known as a “squeeze” shoot or pen.

Dimuzio sends 120 to 125 fallow deer per year to slaughter, choosing a state-regulated facility. “The advantage of using a state-regulated slaughterhouse is that I can make a value-added product like venison sausage and keep it 100 percent venison instead of having to add beef or pork, which a federally regulated slaughterhouse would require,” says Dimuzio. “This way, I can sell pure Vermont venison sausage.”

Deer farming is a lucrative business. LedgEnd Farm sells 99 percent of its venison in-state and has direct contracts with local restaurants, with the overall customer base comprised of 50 percent restaurants and 50 percent private sales made on the farm.

“The demand is there; everything that I produce, I sell,” says Dimuzio.

I’d like to raise one or two a year for my own consumption, in Fernley Nevada, is that possible?

I live in Maine and am interested in learning about raising fallow deer.