Chilling Milk Directly From the Cow for India’s Dairy Farmers

India is the world's largest milk producer -- but much of that milk doesn't make it off the farm due to lack of refrigeration. One start-up is trying to change all that. 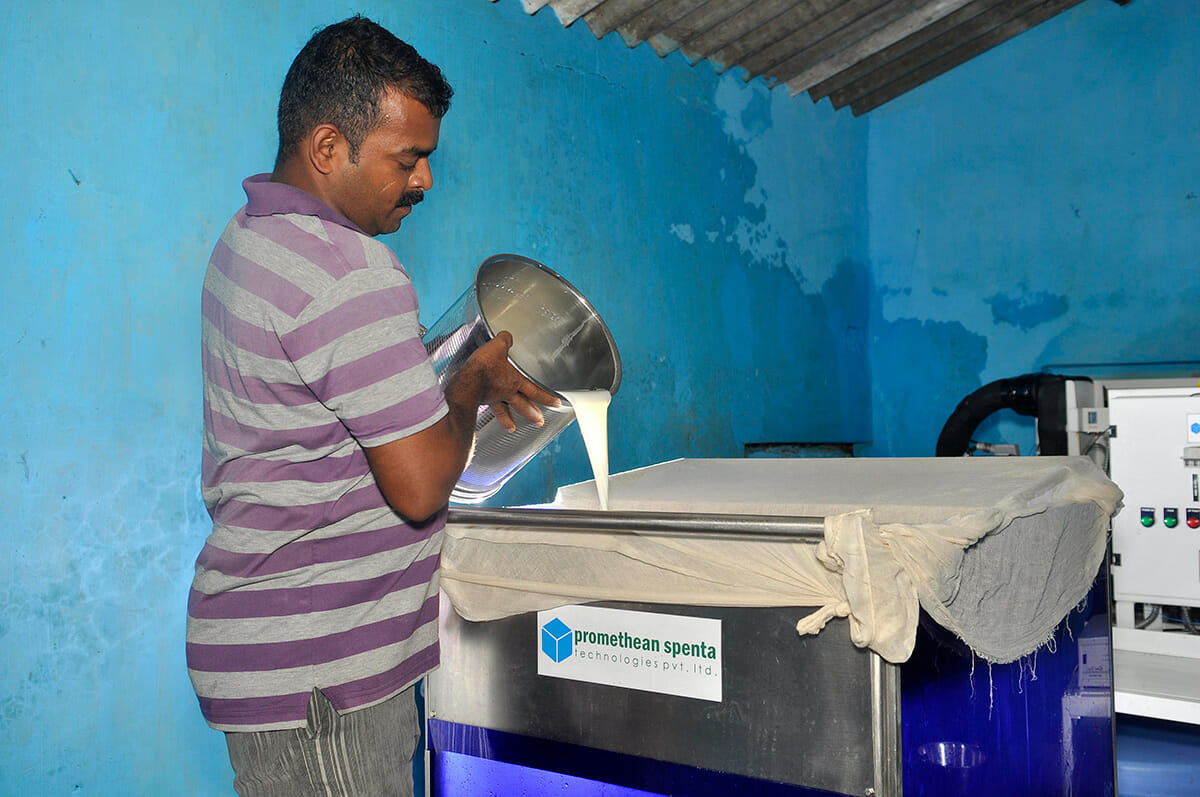 India is the world’s largest milk producer – it contributes 16 percent of global production, with the United States coming second and China third. In 2011, world milk production hit 727 million tons, and according to India’s National Dairy development board, the country contributed about 120 million tons to that figure. The Food and Agriculture Organization of the United Nations (FAO) states that about 50 percent of India’s milk is consumed on-farm. But the other half doesn’t necessarily reach the consumer.

About 50 percent of India’s milk is consumed on-farm — but the other half doesn’t necessarily reach the consumer. Power in India is so unreliable that ‘it’s virtually impossible to get milk to the market without dangerous levels of bacteria.’

Milk is an important food source that developing countries rely on, but it spoils quickly. Lactobacillus, the bacteria naturally present in milk, creates lactic acid which turns the nutritious drink into rancid-smelling white blobs. Chilling milk within four hours of milking cows reduces the chances of spoilage, but that requires refrigeration units and most importantly an uninterrupted power supply. In the U.S. we take electricity for granted, but in the developing world, it’s another story. According to FAO, many developing countries have “difficulties in establishing cooling facilities.” White says the power in India is so unreliable that “it’s virtually impossible to get milk to the market without dangerous levels of bacteria.”

In rural India, farmers rush milk to faraway collection stations on motorbikes to get it chilled. The trip takes about six hours on average, which is two hours too long. In the summer heat, milk can easily spoil en route. “The cows get milked twice a day,” White says, “and they race this milk twice a day, and if they don’t get it to the chilling center in four hours the bacteria kills that milk.” When farmers arrive at collection centers, they do “a smell test” ”“ they sniff the milk to determine if it’s still good. And even at collection centers, electricity can be intermittent. When there’s no power, the centers use diesel generators, but it’s not economically viable to equip every village with one. India has over 300,000 milk producing villages, White says. That’s a lot of spoiled milk.

The milk chiller idea took hold in 2007 when White and Grama went to India to see how their solar invention could be put to work. On the journey, they talked to a manager at The Bangalore Milk Union Limited (BAMUL), a milk union that procures and distributes about half a ton of milk daily; the manager told them how hard it was to gather that milk from thousands of little villages every day.

Suddenly, White and Grama had a real-world problem to solve: harnessing the sun’s heat to chill milk. They formed Promethean Power and got to work. The duo came up with a thermal battery idea. A thermal battery works by freezing an inside coolant – water mixed with chemicals. When the sun is on, the device runs a refrigeration cycle, bringing that liquid coolant inside a stainless steel cylinder to below freezing. Then, fresh milk is poured over the cylinder’s icy surface. “The milk forms a thin film and as it flows down this freezing stainless steel surface every molecule of the milk gets a thermal shock,” White explains. That “thermal shock” instantly cools milk. The process is similar to how we make ice in our freezers and then pour water over ice cubes to quickly make it cold. The battery works on the same principle, except the chemical coolant inside the cylinder remains frozen for much longer than regular ice.

Now, milk could be chilled where it was produced and kept on-site until a distributor was able to pick it up.

The duo built the battery in Boston and shipped it to India, but the first iteration didn’t work – the solar thermal battery turned out to be too big and expensive. That’s when they realized they might have to scrap their original, contest-winning concept.

After some soul-searching, White and Grama abandoned solar in favor of an electrical battery that uses the intermittent power the villages have. It was a hard decision, White says, because their original concept was about harnessing the sustainable power of the sun rather than electricity produced by fossil fuel. But the redesign made economic sense and ultimately solved the milk wastage problem. They christened their invention the “Rapid Milk Chiller.” It was made available for purchase in mid-year of 2013.

“We are selling these in India right now,” says Grama, adding that about 35 villages are now chilling at the cow and they will be selling more systems. “Each system costs anywhere from $10,000 to $15,000, depending on options.”

RMCs are installed at village collection centers within walking or biking distances of farmers’ houses, so they no longer have to travel to faraway hubs. Farmers milk their cows in the morning, carry milk to the collection center and pour it into the chiller until the entire village is done. White likens the process to a river that never stops. “Each farmer brings 2-5 liters of milk,” says Grama. “Each system can cool up to 1000 liters of milk per day.” After the 1000 liters, the frozen coolant inside the battery melts and has to be re-frozen, which requires eight hours of intermittent electricity, but villages do get power for that much time. Chilled milk is stored inside an insulated tank until it’s picked up by a tanker.

Grama and White are experimenting with more efficient design. “Every RMC has one battery but we just completed a prototype where two batteries are working in parallel in order to increase chilling capacity,” White says. That would allow farmers to go over the current 1000 liter limit. Grama adds that they are planning to export the chillers to other South East Asian countries that have similar grid problems.

But the battery can also help with chilling milk more efficiently in countries with stable power. For example, the battery can be charged at night when there is less power demand and electricity is cheaper. “Our system effectively shifts the cooling load from peak hours of the day to off-peak hours at night,” Grama says.

But they haven’t given up on the sun. He says the solar idea will make a comeback in the next generation.

“We are testing a new solar charging option that could reduce and even eliminate the dependency on grid electricity,” Grama says.

Popular
Yes, the Government Really Does Stash Billions of Pounds of Cheese in...Emily Baron Cadloff
How to (Actually) Get Rid of Fruit FliesEmily Baron Cadloff
7 Smokable Plants You Can Grow That Aren’t MarijuanaBrian Barth
Paddleboarding Goats Make a Splash on Prince Edward IslandNoah Lederman
What to Do With an Abundance of PeppersShelby Vittek
Explore Modern Farmer
Related
Environment, Plants
Making the Case for IntercroppingShea Swenson
MTMF
Meet the Modern Farmer Helping Immigrant Farmers Sell Their ProduceBridget Shirvell
Animals, MTMF
Paddleboarding Goats Make a Splash on Prince Edward IslandNoah Lederman
Plants
Rice Growers Continue to Battle Weedy EnemyLindsay Campbell
wpDiscuz
We use cookies on our website to give you the most relevant experience by remembering your preferences and repeat visits. By clicking “Accept”, you consent to the use of ALL the cookies.
Cookie settings ACCEPT
Privacy & Cookies Policy