Flock Star: From Computers to Cars, Chicken Feathers Are Everywhere

The poultry industry produces six billion tons of chicken feathers every year, most of it destined to end up in a landfill. But recently chicken feathers have ended up in everything from art projects to running shoes to car manufacturing. 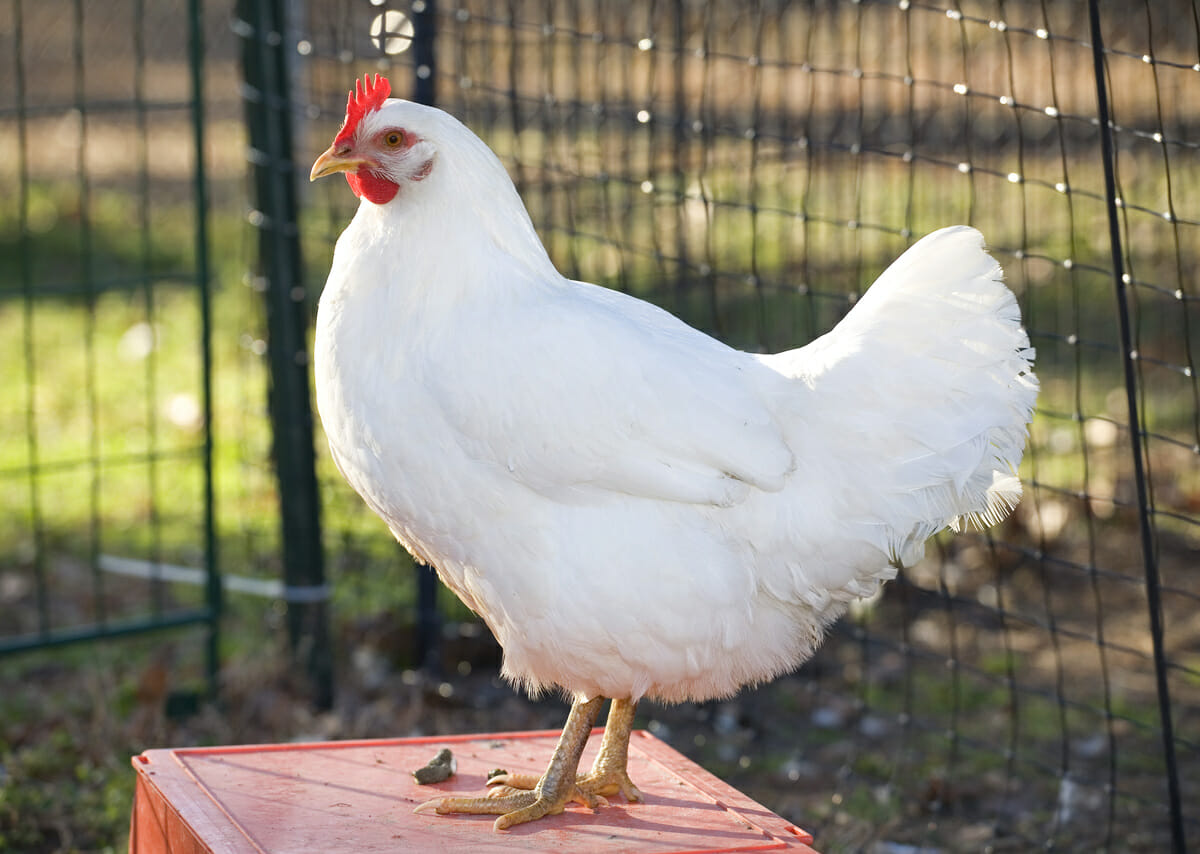 A regular-sized chicken has at least 10,000 feathers. With Americans eating 8 billion chickens annually, the feather supply is endless. Unlike geese, chickens don’t produce the type of down needed to manufacture products for human warmth. The poultry industry produces around six billion tons of feathers annually, typically discarded as useless, plucked by machines in massive processing plants and hauled to landfills where, due to their composition, they are unable to decompose.

But recently, things have taken a turn for the unglamorous by-product: they’re showing up in everything from art projects to running shoes to car manufacturing.

In 1993, Walter Schmidt, a research chemist at the Beltsville, Maryland branch of the U.S. Department of Agriculture’s Agricultural Research Service, called up Tyson Foods and Perdue Farms and asked if they would like to pass their chicken feathers on to him. The thinking was that finding uses for feather byproducts was both environmentally friendly and could mean a stronger bottom line. The companies agreed, and Schmidt and his colleagues proceeded to subject chicken feathers to all kinds of experiments. They even fried them and dashed them with hot sauce. Schmidt noted that the feathers taste “a lot like pork rinds” but healthier, as they’re packed with protein. Soon after, he became the first person to make paper out of chicken feathers.

“It was arty, a bit like tissue, very textured,” he says.

The list of things that feathers have been used to make include dishes, furniture, clothing and circuit boards – just to name a few.

One thing feathers have going for them are keratin, a tightly wound, crystal structured protein eight times stronger the cellulose. Feathers are packed with the stuff, but you have to work for it. First the feathers must be ground and then placed in a turbulent air flow separating machine that thrusts the quill segments to the base, blowing the barbs to the top. Then they can be softened with heat and molded into shapes. Often other bioplastics are added to optimize strength or flexibility and to make a lighter plastic.

Unlike petroleum-based plastics, they safely biodegrade, often releasing beneficial nitrogen into the soil.

Schmidt is now one of many researchers internationally working with chicken feathers and to date, estimates he’s processed at least 10,000 pounds of them. He and his colleagues are fond of the phrase “making chicken salad out of chicken shit.”

The list of things that the keratin-rich material has been used to make is vast: dishes and furniture, clothing, circuit boards, wall insulation, filters and planting pots (the feathers of one chicken makes three one-gallon containers). Feathers are used to make hurricane-proof roofing, shoe soles, and lightweight auto dashboards and glove compartments leading to fuel efficiency. While most are still prototypes, Schmidt says a “handful” of patents have been licensed by research institutes.

For example, the Nixa, Missouri-based Featherfiber Corp. is commercializing Schmidt’s group’s 1998 patent on technology to separate feather fiber from the quill. Close to opening a production plant, Schmidt says they will soon produce cosmetics and car parts. “The feather fiber grinds to a powdery talc making the keratin useful in beauty products,” Schmidt adds.

A mix of fiberglass and feathers has been used in boat construction. Feathers have even been used to replace the absorptive layer in diapers that are usually made out of wood pulp, also called “fluff pulp.” Swapping wood pulp out for feathers may save more than a few trees, Schmidt points out. Plus, it just works really well.

“Picture this,” says Schmidt, “When a diapered baby sits on a couch, the liquid can be squeezed out. But by adding keratin, the fiber isn’t compressible but it remains absorbent, so the water stays in.”

And while chicken feathers have long been used for livestock feed, researchers at Cornell University are working with enzymes that will help the keratin be more digestible. Chickens may even finally fly, as there is research being done into using feathers in the aerospace and aircraft industries.

Making use of the entire bird is in line with sustainability, biomimicry and even eco-Buddhism, says Richard Wool, professor of chemical and biomolecular engineering at the University of Delaware who has made printed circuit boards from soy oil and feathers, and is working with both Puma and Nike on a shoe sole made with feathers. Wool is also one of several researchers who believe feathers could be a valuable combatant against oil spills.

When the fibers are cut to the proper size, surface tension forces them to form networks that attract and trap the oil spilled on the water’s surface, Wood explains. With 5 or 6 billion pounds of feathers generated annually, it’s an amount that, dumped from an airplane, could handle an oil spill covering some 200,000 square miles.

The feather renaissance isn’t just taking place in the scientific world. Corinne Tippett is elevating the chicken feather to art.

An Oregon resident, Tippett spent several years raising chickens and other fowl for eggs and as pets. During their molts she began to truly appreciate the “stunningly spectacular” beauty of each feather. When a bird would die, she couldn’t bring herself to bury it feathered. She and her family began a tradition. When one passed, she would hand pluck the bird, separating its various types and sizes of feathers. If it died of old age, the bird would become dinner.

When walking on the beach, Schmidt says he watches a flock of seagulls and doesn’t think ‘bird’ but ‘A mass of feathers!’

Over time, Tippett collected hundreds of thousands of feathers – “good karma” or “no-kill feathers” she calls them. She learned how to treat them with citronella and cloves so they’d be free of mites, wrote a book about her poultry-raising experience, “Just a Couple of Chickens”. She also began a business, The Feathered Egg, selling the stunning plumage at 25 cents per feather, to artists, hat and jewelry makers, cat-toy makers, fly tiers, and hair ornament designers. Oddly, she receives a steady flow of orders from active American servicemen. “I’ve no idea what they do with them,” she says.

Tippett revels in the idea that we’re learning how to reuse chicken feathers. After all, she says, wearing feathers and making crafts with feathers is how Native Americans paid homage to the birds they killed and consumed. Reuse was common in the past, with feather pins used as intricate shoulder decoration on clothing.

Schmidt, too, shares Tippett’s enthusiastic view of feathers. When he spies a flock of seagulls while walking on beach, he says “I don’t think ‘bird’, I think ‘A flying mass of feathers.’” It amuses him when the wrong size shredder is used in the lab and “there’s a snowstorm of feathers, the whole room a blizzard! It’s fun!”

A font of feather facts, Schmidt is happy to rattle them off to those willing to listen. Did you know, he says, that the reason common chicken feathers appear white is due to refractory light and each is actually translucent? As it is with snowflakes, no two feathers are alike, Schmidt says. And they grow in very specific order. If you were to try and put all of the feathers plucked back on the chicken, they would only fit where they originally grew. A feather from the right side won’t go on the left.

“What if feathers, like pork bellies, are someday traded in the exchanges?”

Keen to be on the mailing it as I want to know more about the uses of feathers as by products instead of dumping them as waste.

I want to learn more about the use of feathers. I want to make some ornaments from them in my home country