Think nothing is as emblematic of this country as apple pie? Or maybe baseball is the ne plus ultra of the American dream? You've clearly never seen a tractor square dance. 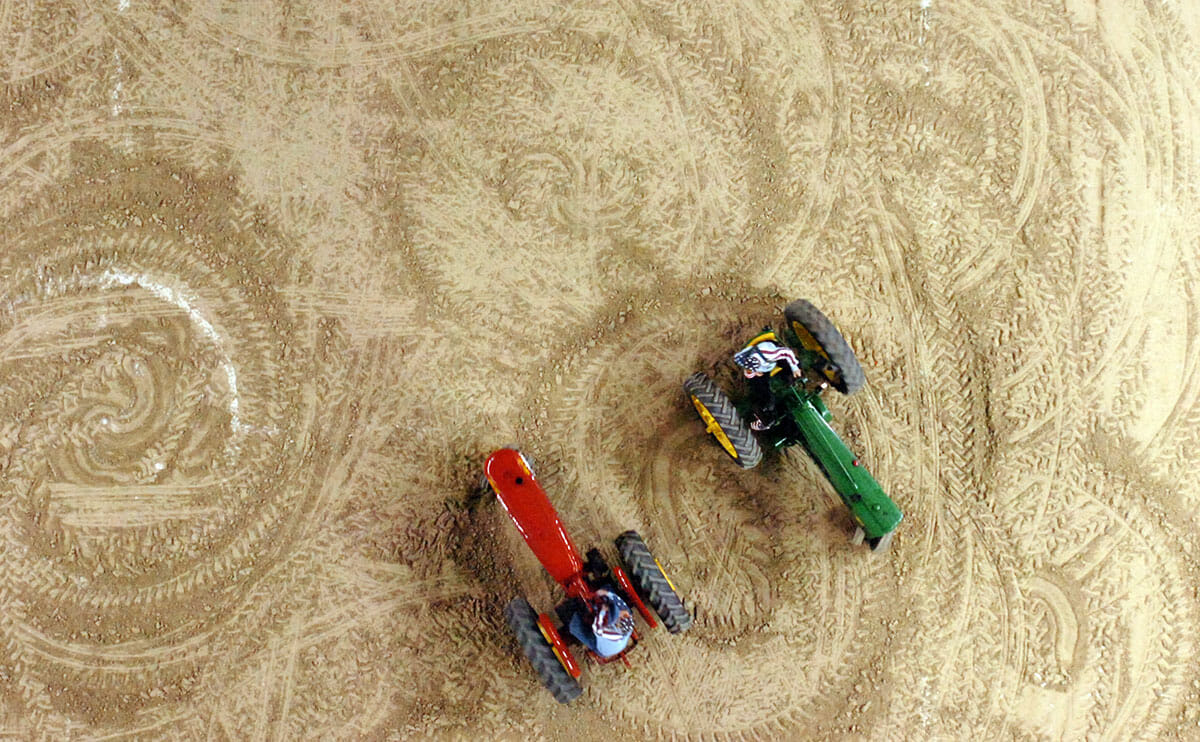 The act is exactly what it sounds like. Four seated couples maneuver vintage tractors into daisy chains and do-si-dos in front of a live audience. It would be hard to squeeze more nostalgia into a performance that combines made-in-America machines with our “National Folk Dance.”

“We are all from Nemaha, Iowa. We all have real jobs, believe it or not,” Laurie Mason-Schmidt says during a show. She’s the caller for Farmall Promenade, the most famous group of square dancing tractors.

“We farm. I teach school. And some days we dress up a little strangely and get on our tractors and square dance.”

Tractor square dancing isn’t an organized sport. There are no statistics on how many groups exist – especially as people often come together just to perform at one-time-only events. But you can be sure that any state with serious tractor-maneuvering skills has residents looking for a way to show off.

The first tractor dance was part of a 1953 advertising campaign by International Harvester to show off the fast hitching abilities of their Farmall Super-C tractor. The (then) new technology allowed farmers to change implements as easily as switching dance partners. An ad from one of these performances describes the act as a “sensational, never-to-be-forgotten act.”

In an unintended moment of truth in advertising, the hyperbole was spot on.

Though square dancing farm machinery may have persisted under the radar, its real comeback has occurred over the last decade. The most famous modern troupe, known as the Farmall Promenade, was formed to celebrate Nemaha, Iowa’s centennial in 1999. (To come full circle, International Harvester even became Farmall Promenade’s official sponsor.) Until the troupe’s dissolution in 2009, they were the face of tractor dances across the United States.

The special touches that made Farmall Promenade a success have spread to other troupes. Tractor square dances always feature eight riders in their performances ”“ four couples to make up the dance’s traditional “square” – who often dress in exaggerated drag to play the male and female roles. Another important similarity between troupes is the colorful rhyming instructions of their caller, referred to as patter-call.

Laurie Mason-Schmidt, Farmall’s caller, wrote performance rhymes like, “Promenade this girl please do, she’s the one who came with you. She’s with you, have no fear; she won’t go home with that John Deere.” Giving a little chuckle to any audience members who could keep up, the rhymes serve as placeholders to give the dancers more time to complete a longer step.

Most dancers use narrow tractors but new breeds of troupes like The Country Fest Tractor Square Dancers have gone a different route from their predecessors. Using both wide and narrow tractors, their shows run in high gear ”“ literally.

Unfortunately, interested dancers from younger generations face an insurmountable roadblock to joining these groups themselves: tractor driving is a lost art.

“All but two of our group are farmers,” says founding member Bob Unrast, “If you’ve never driven a tractor, it wouldn’t work.” Not only do they square dance on tractors, they do it in third gear. On some of the group’s older models, it’s the highest setting they have in common. “If you’ve got dairy cows, you know how to hitch and break and turn around in a tight corner.”

The Country Fest Dancers inspire hope in those of us who’d like to see square dancing tractors continue. With ages ranging from mid-40s to late 60s, they’re actually one of the younger groups out there. Unrast missed the original Fast Hitch Square Dance of 1953 but, 20 years ago, found inspiration with another tractor dance show.

“We had people who didn’t have a tractor and didn’t know how to drive a tractor. Now that’s just too much,” says George Frymower, the organizer of Pennsylvania’s Middle Creek Tractor Swingers. A few swing-dancing lessons is one thing, driving and obtaining vintage machinery is another.

Is tractor square dancing doomed to extinction like so many quirks of American life? Not yet. Tractor square dancing is a beloved fixture to county fairs and celebrations across the United States – you just have to get out of the city. The era of gingham is ending. Today’s tractor dances have themes, costumes, and even pyrotechnics. All it needs to survive are farmers who know their way around a clutch.

My father drove in these square dances in his teens here all over at fairs across Ontario Canada in the late 50’s for IH showing off the implements and how quickly they could be changed. How I wish there was video or pictures from his days doing this. I can’t seem to find any video of the IH tractors using the equipment in the dances which I would think is even more amazing than the ones they do now. Yesterday my father gifted me the cufflinks and tie pin for Christmas he received from IH back then. He is 79… Read more »