A Prickly Question: Could Cactus Be the Next Kale? - Modern Farmer
Food & Drink

A Prickly Question: Could Cactus Be the Next Kale?

The fruit of the Opuntia Ficus-Indica might be better known as a prickly pear or tunas in Spanish, but Claudia Villalobos, a sales specialist with the farm, prefers cactus pears. The name sounds less dangerous and confusing. And as the fruits make for a sweet snack or a margarita mixer, the pads of the cactus […] 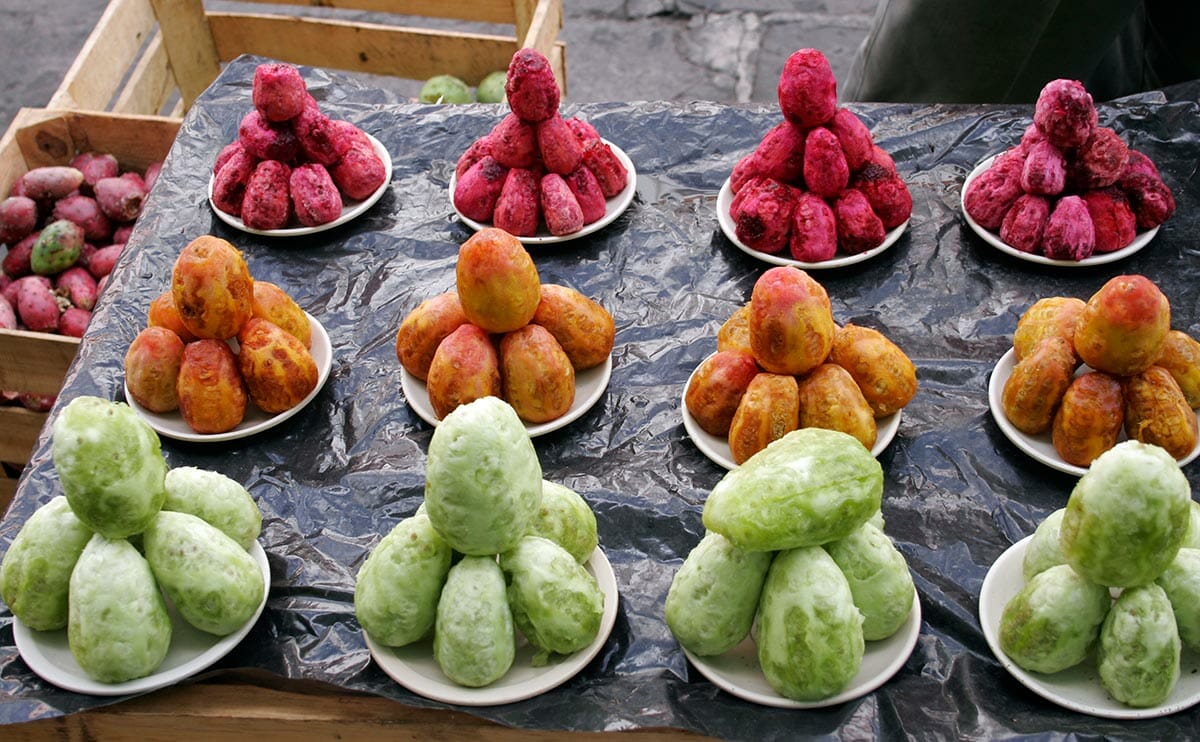 The fruit of the Opuntia Ficus-Indica might be better known as a prickly pear or tunas in Spanish, but Claudia Villalobos, a sales specialist with the farm, prefers cactus pears. The name sounds less dangerous and confusing. And as the fruits make for a sweet snack or a margarita mixer, the pads of the cactus make nopalitos, an okra-like dish Mexican cooks often add to tacos and scrambled eggs.

Nopalitos is the sixth most popular vegetable Mexico, representing $150 million in sales in 2007.

Nopalitos is the sixth most popular vegetable Mexico, representing $150 million in sales at last report in 2007. It also gives corn a run for its money in cultural importance. The Mickey Mouse”“eared plant appears on the Mexican flag. Tenochtitlan, the Aztec name for Mexico City, means “Place where the cactus pear grows on stone.” And research indicates Mesoamericans cultivated the Opuntia Ficus-Indica more than 9,000 years ago, making it one of the world’s first domesticated plants.

Other countries aren’t far behind in their love of cactus according to a study by the U.N.’s Food and Agriculture Organization. Ethiopia, Morocco, South Africa, Peru, Argentina and Chile all have significant acreage devoted to nopales for either human consumption or as livestock feed. Italy stays away from the paddles, but has long had a deep love for cactus fruit. Intensive plantations across Sicily and the southern mainland make it only second to Mexico in cactus fruit production.

In fact, the D’Arrigo Bros. Co. has longed aimed their cactus operation at Italian immigrants. “There’s a huge Italian population on the East Coast and in Canada,” says Villalobos. “Since they grew up with the pears, that something that’s very near and dear to their hearts and their sweet tooths.”

But now those customers, who often eat three to four cactus pears a day, could be dying out, leaving D’Arrigo Bros. Co. to look for new sales options. A 19-year breeding program has produced four new pears for the American market that are sweeter and larger than the traditional variety. A flux of immigrants from Mexico has brought a new demand for cactus, but just as the Mexican cactus industry has improved its capacity and quality. “Our friendly competitors in Mexico are very close to us, so you see lots of competitive fruit on the market,” says Villalobos. “And their quality has really improved in the last few years.”

John and Vickie Dicus run Riverrock Gardens, a much smaller organic cactus operation in Southern California. Most of their customers ordering nopalitos online first learned to love the food in Mexico, but two groups make up an increasing part of their customer base: locavores and health nuts.

The locavores like how few agriculture inputs nopales requires in arid and semi-arid regions. After all, it grows as a weed in such places.

The locavores like how few agriculture inputs nopales requires in arid and semi-arid regions. After all, it grows as a weed in such places. Adam Brock, a food activist in Denver, Colo., centered his 2013 TED talk on nopales as a perfect example of permaculture. “As we all know, cactus requires very little water to grow,” he said, making it an ideal food crop for Colorado.

Health conscious lovers of nopales point to the vasts amounts of vitamin C, antioxidants and fiber in the plant. Studies also seem to indicate nopales as an effective treatment for diabetes and hangovers.

“A prickly subject indeed,” says Loretta Oden, a chef who regularly used nopales pads and fruit at her restaurant in Santa Fe, New Mexico. Other than the spines, which are now almost always removed before being added to produce sections, the pads have one often unwanted quality: loads of mucilaginous slime. To improve the mouth feel, Odem boils the pads until they sink to the bottom of the pot. Villalobos recommends grilling. “You can basically substitute as if it were a portabello mushroom,” says Villalobos. “It’s very thick and meaty, so it’s great on the grill.”

The pears shouldn’t be as tough of a sell. A little knife work to remove the rough skin reveals a sweet flesh with a texture that lands between a watermelon and a kiwi.

One bite confirms a Sicilian journalist’s adage about cactus pears: “A treasure that lies beneath the spines.”

Two Ways to Eat a Cactus

One or two nopalitos per person
Olive oil
Salt
Pepper

1) If spines are present, remove them CAREFULLY by holding the pad by the stem end (wear gloves or hold with dish towel) and cutting, with a sharp knife, against the grain, removing the bumps that are around all of the spines.

2) After you have removed the spines, use a sharp knife to score crosshatch in the paddle from the round end toward the base, about 1/3 inch apart, being careful not to cut through the base. (This not only makes them look pretty after grilling but helps to speed the cooking process and to reduce some of the mucilage from the pads.)

3) Brush each paddle lightly with olive oil. Season with salt and freshly ground black pepper. In a grill pan or a cast-iron frying pan over medium-high heat, or on an outdoor grill (mesquite wood/chips really give a great flavor)…sear the paddles, allowing three to four minutes per side, until they are yellowish green with charred spots. If they start to curl, press down on the paddles with spatula or even a potato masher, if necessary, to keep them in contact with the surface of the pan.

1) Cut ends from Andy Boy cactus pears. Cut a lengthwise slit through peel on each fruit. Pull back peel, scoop out fruit and discard peel.

2) Put prickly pear pulp, lemon juice, sugar and 1 cup water in a blender. Blend until smooth.
Strain over a colander in a bowl.