Is Your Refrigerator Running?

As natural disasters occur with more force and frequency, an energy grid based on electricity has begun to look quite tenuous. America is forced to look at its dangerous reliance on refrigeration. 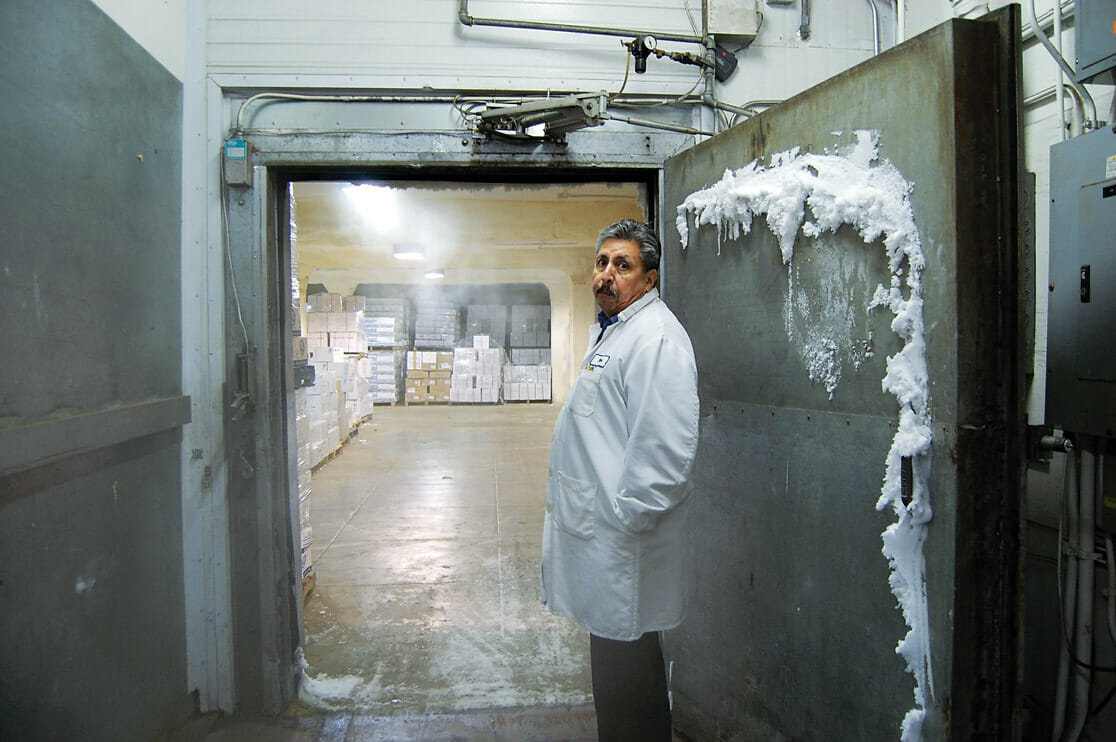 It took more than four weeks to restore power to the New Orleans Cold Storage (NOCS) facility when Hurricane Katrina struck the Gulf Coast in 2005. Established in 1886, NOCS is the oldest cold storage company in North America, a business with the proud motto of “Always Accountable.” But after a month without electricity, its building was declared a toxic waste site. An army of workers equipped with Hazmat suits and emergency breathing gear spent six weeks shoveling 26 million pounds of rotten chicken out of the ruined building.

The meat, of course, had spoiled – spectacularly so – dissolving into a brownish, fetid sludge, writhing with rats and maggots.

Seven years later, Hurricane Sandy hit the East Coast of the United States and snapped the cold chain once again. Widespread power outages forced restaurants and grocery stores across the Northeast to toss hundreds of thousands of dollars’ worth of fresh food. Meanwhile, regional farmers lost small fortunes of their own because access to one of their primary markets for meat and produce was cut off during the run-up to Thanksgiving.

Refrigeration is the invisible backbone on which the world’s food supply depends – and given our climate-changed forecast of more extreme weather events, it may yet prove to be its Achilles’ heel.

Currently, 70 percent of America’s food supply is refrigerated at some point in its journey from farm to table, and without refrigeration, meat, chicken, seafood and dairy last just two hours before they’re unsafe to eat. Perishable fruits and vegetables often have only a day or two at room temperature before they turn to mush.

Fortunately, people (and governments) have begun waking up to the vulnerability of the electricity-powered cold chain; it’s not just the preppers who are working on disaster plans these days. Post-Sandy, home generator makers have seen massive growth. Generac, the company that controls 70 percent of the North American market, has doubled its stock price in the past year. The global market for solar power with energy storage – i.e., a battery that can keep going even without an electrical power grid – is expected to rise to $2.8 billion in 2018, from its current $200 million. (As one solar-powered battery-loving man told Bloomberg News “We wanted to have an alternative in case of a blackout to keep the refrigerator running.”) On the public policy side, resiliency is the new buzzword, as cities rush to build new infrastructure in the wake of climate change.

Bad news in an era of extended power outages: 70 percent of America’s food is currently refrigerated at some point between farm and table.

Experts say we are only at the beginning of grappling with this issue. “Not enough people are discussing [refrigeration],” says Alex Wilson, president of the Resilient Design Institute and an author of Boston’s recently released resiliency plan. More research is coming, though: The city of New York is commissioning a survey of its entire food supply chain in the coming year, to get a better sense of where the weak links are – and how they can be strengthened. More private institutions, also, are keeping an eye on perishables. Wilson says that the Spaulding Rehabilitation Hospital in Massachusetts is doing a retrofit that will include boosting food storage capability to four days. “Four days isn’t a lot,” Wilson says. “But it’s better than most facilities.”

In a disaster situation, extended power outages are the norm, and the problem. According to Adam Feiges, whose family runs Cloverleaf, one of the largest cold storage firms in the United States, a storm took out the power at Cloverleaf’s Columbus, Ohio, facility for several days last year. Not one to panic, Feiges explains: “In a modern, well-built warehouse, with the lights off and the doors closed, you’ve got about four days before temperatures rise above a critical point.” This might buy enough time to find and rent a backup generator after a minor winter storm or outage, but it may as well be four seconds following storms the size of Andrew, Katrina or Sandy, when people can be off the grid for weeks.

“This is something I worry about,” Feiges admits, “as the weather seems to become more” – he pauses – “let’s say, unpredictable.” The Intergovernmental Panel on Climate Change confirms his fears: Its September 2013 report concluded that an increase in extreme weather over the coming decades is a virtual certainty.

The destructive impact of Hurricane Sandy propelled New York City to take the lead in figuring out how to safeguard the network of refrigerated trucks and cold storage warehouses that supply its grocery shelves. A June 2013 Mayor Bloomberg administration report outlined a variety of initiatives to boost New York City’s climate resilience, including a chapter on food supply and distribution infrastructure.

In it, Daniel Zarrilli, the city’s new director of resilience, revealed that the storm’s damage to New York City’s cold chain was nearly much, much worse.

If Sandy had hit just a few hours earlier, it would have flooded the Hunts Point Food Distribution Center, whose refrigerated facilities handle more than 60 percent of the city’s produce and half of its meat and fish.

Mayor Bloomberg’s resiliency plan is among the more thorough examples in this new genre: It recommends a comprehensive flood protection system combining permanent levees and temporary barriers for Hunts Point, as well as the first comprehensive analysis of the city’s food supply and cold chain network. But, in the meantime, it’s worth considering that although several of New York’s community gardens and urban farms were flooded during the surge, others emerged unscathed. Indeed, during the days the Rockaways were cut off from transportation and outside assistance, the Beach 91st Street Community Garden served as the neighborhood’s primary fresh-food source and as a gathering place for dinner each night.