In theory, farmers should be poster children for the locavore movement. They have fridges and fields (or home gardens, in the case of some larger farms) stuffed with gorgeous produce. But such proximity to local food does not automatically translate to the plate. The evidence is perhaps most extreme in California’s Central Valley, where a […] 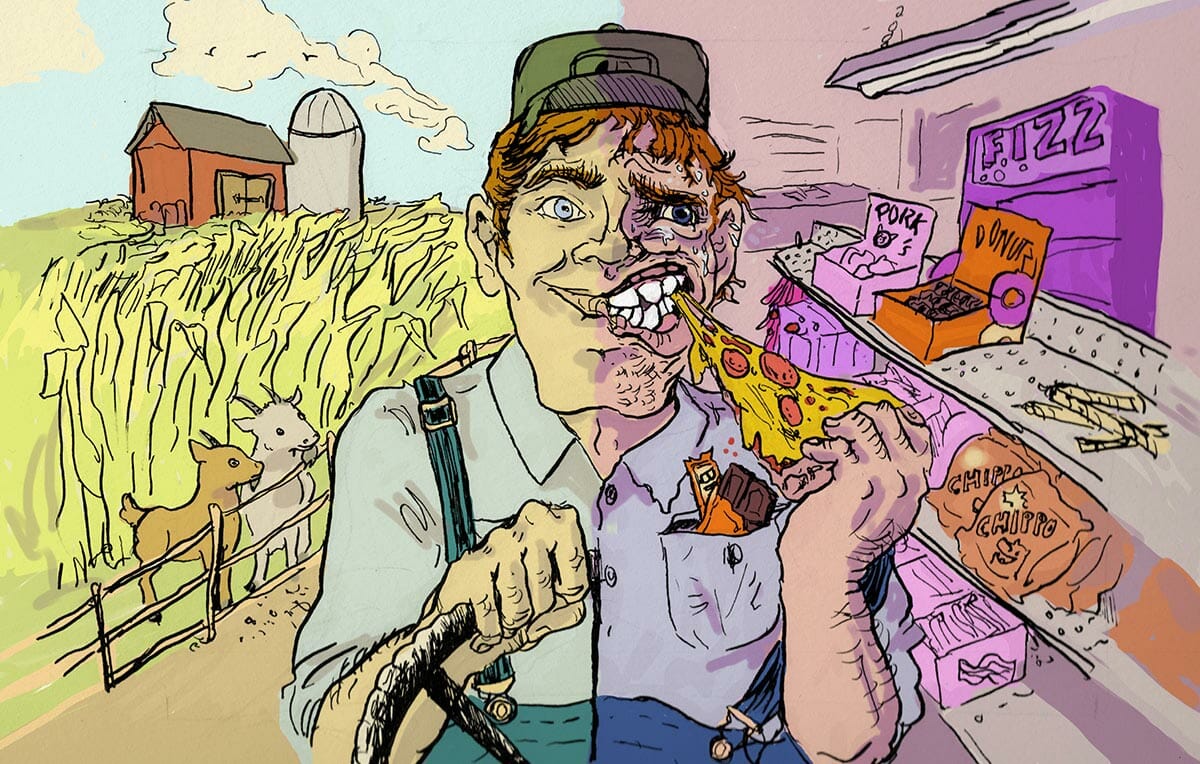 In theory, farmers should be poster children for the locavore movement. They have fridges and fields (or home gardens, in the case of some larger farms) stuffed with gorgeous produce. But such proximity to local food does not automatically translate to the plate. The evidence is perhaps most extreme in California’s Central Valley, where a startling 80 percent of farm laborers ”“ many of whom are recent immigrants living in low-income communities ”“ are obese. But the disconnect impacts farmers of all kinds.

The primary source of the tension between what farmers grow and what they end up eating is time. During the planting and harvest seasons the days can get extreme, stretching as long as 12 to 16 hours. Farmers who host onsite CSA pickups or navigate through rush hour traffic to drop produce off in nearby cities have to cater to their customer’s own hectic work schedules, which pushes off dinner prep (not to mention breakfast and lunch for the next day) until 8 or 9pm at the earliest.

“My breakfast is usually yogurt and granola. The yogurt could be healthy, but I end up with the sugary, non organic stuff rather than the homemade I would make if I had the time,” says Jen Burt, 29, of Dismas Family Farm in Massachusetts. When things get really hectic, Burt finds herself snacking on Doritos, Peanut Butter M&Ms and ice cream during the 30-minute drive between the farm to her house. “I grew up in a family that ate a lot of junk food. Since then my appetite has changed, but when I’m most stressed, I often just want those familiar foods,” she says.

‘You see a lot of running to the gas station for chips, soda and coffee, which helps farmers stay awake during the crazy hours.’

Rachel Kaplan, 35, of Powisset Farm, a CSA farm in Massachusetts, shares a similar sentiment. “At the height of the season, it is a feat in and of itself to sustain the energy to work let alone come home and start preparing food.” Even more to the point, she adds: “A lot of the times cooking comes at the expense of sleep.”

Nick Hagen, 28, a fifth-generation farmer at Hagen Farm in North Dakota, says eating in the fields also poses logistical challenges. “Throughout our wheat or sugar beet harvests, there is no time to stop for lunch. I typically have one hand on the tractor’s steering wheel all day, and fish around in my lunch box with the other.” Hagen ends up eating a lot of one-palm foods like peeled hardboiled eggs and plain beans packaged in a container he can “hold and almost drink.” Apples are in; oranges, which need to be peeled, are out. “I can occasionally manage a banana,” he said.

Hagen, who has a gluten intolerance that forces him to be creative about his in-field meals, manages to eat fairly healthily, if not excitingly. But for many farmers, this lack of time translates into less-than-ideal food choices. “You see a lot of running to the gas station for chips, soda and coffee, which helps farmers stay awake during the crazy hours,” Hagen says.

Bryan Austin, 53 of Dover Farm in Massachusetts, agrees. “Our bodies need energy and modern foods like potato chips (fat), coffee (caffeine) and cakes (glucose) give instant energy,” he says. “Last year, I ate store muffins for breakfast, drank three cups of coffee a day and always had some candy as a snack ”“ awful!” Bryn Bird, 29, a second-generation farmer at Bird’s Haven Farms in Ohio, says, “The summer is the most unhealthy time for most of the farmers I am social with,” she said. “My family lives on pizza all summer.”

‘The summer is the most unhealthy time for most of the farmers I am social with. My family lives on pizza all summer.

“I always laugh at cookbooks that include approximate cooking times for recipes,” Kaplan says. “If you start with greens that still need to have the dirt and grit washed off of them, everything takes much longer!” According to Hagen, there is a greater awareness about health in the farming community than there once was. But when push comes to shove, a doughnut or a Snickers Bar win out by offering unparalleled convenience when farmers need it most.

Historically, the social ecology of a family farm included systems to accommodate the harvest season time-crunch. Some members of the family, traditionally the father and brothers, worked in the fields while others, typically the women, were tasked with preparing and, when necessary, packing up, breakfast, lunch and dinner. They also spent hours canning, pickling, preserving and otherwise stretching the life of the season’s crop.

Some farms continue to work this way. “Where I live in North Dakota, most farmers have a mother or a wife making their food,” says Hagen said. In his case, it’s his mother and girlfriend. “Without that support, you begin to get into the junk food element.”

But if a farm is set up so that the whole family works in the fields, or one spouse works a supplementary job, those systems can break down quickly. Brad Wilson, 60, of Fireweed Farm in Iowa, says falling crop prices over the last half-century have eroded the traditional family structure on many farms: “The wives had to get jobs in town, which takes away the home garden and vegetables at dinner. After my mom died, with my wife working in town, I asked my dad to bring out food for the workers. Instead of sandwiches, he went to town and bought high sugar, artificially flavored junk food in packages.”

Meanwhile, today’s growing crop of young farmers ”“ the ones who left urban life in order to farm ”“ often find themselves lacking that critical support network. “My friends sometimes joke that they wish they had a ‘farm wife’ or ‘farm husband,’” says Kaplan.

Some farms have developed creative workarounds to the time management issue ”“ like turning their fields into makeshift kitchens. Greg and Cari Horning, both 44, are 3rd generation potato and onion farmers at Horning Farms in Washington. They occasionally use their tractor as an oven. “I wrap a spud in foil, or just put it fresh from the ground onto the exhaust manifold,” says Greg. “The manifold can be extremely hot, so it doesn’t take long to cook.” When he remembers, he even packs “a little butter or bacon to eat with it.”

Other farms reimagine the traditional family farm structure by splitting up cooking responsibilities, coop-style, between workers. Kaplan’s farm, meanwhile, is considering offering a food prep work share to their CSA members. Instead of volunteering at a CSA distribution or in the fields, the members would spend a few hours each week during the season preparing meals for the staff. These innovations help, but it still takes serious and surprising dedication to eat well as a farmer. “I am actually cooking as we talk right now, Kaplan told this reporter over the phone. “Multitasking is key.”