The Global Guide to Local: Berlin

Tech nerds, artists, designers and, increasingly, food lovers all have reasons to gather in Berlin. 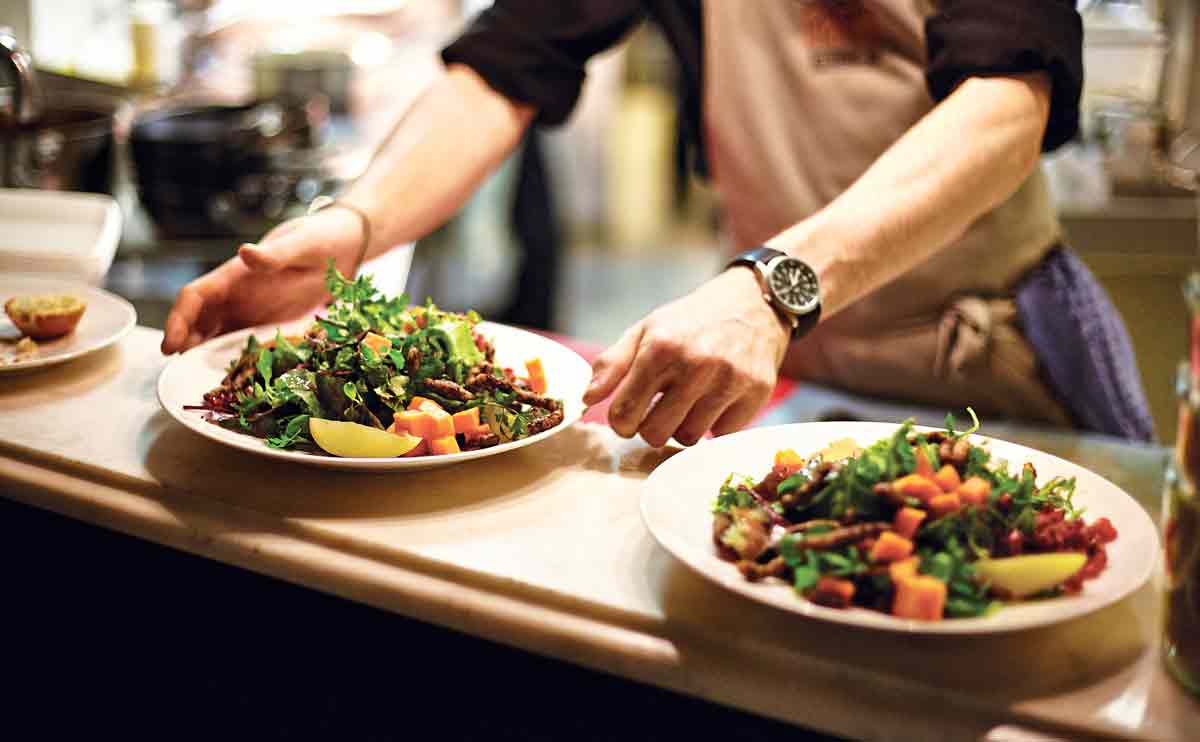 Berlin is a city that straddles old and new, gritty and high-end. It has certainly been known more for its techno scene and the arts than its local food or sustainable hotels. But Berlin is on our radar because it embraces and excels at an artisanal and local ethic. The city is indulging its appetite for farm-to-table eating, and there are at least a dozen great restaurants to try.

Katz Orange, a two-year-old restaurant inside a historic brick brewery with an intimate courtyard, is indicative of this change. Their menu, printed on brown paper, highlights an excellent mix of vegan and organic meat dishes. Considering Germany’s love for pork, it makes sense that they serve it up like they do here: slow-cooked meat from happy organic pigs alongside a variety of seasonal vegetables.

Owner Ludwig Cramer-Klett is less concerned about food trends and more with, as he puts it, “creating connections and consciousness though the topic of food.” He just opened what he calls the Contemporary Food Lab, a nearby gallery-like space that will host food-related exhibitions and lectures.

This backpacker-style hotel for grown-ups was created by a group of friends in an old factory near the Spree river. The public spaces are a whimsical pastiche of polished concrete, antique rugs and wood. Rooms, which come in three sizes and are made to share, are simple but offer details like towel racks made from mounted sugar bowls. Those that prefer privacy can splurge on one of the Luxus suites.

Sustainable wood furniture and floors (check), vegetarian kitchen (check), organic sheets (check) and electricity only from renewable energy sources (check). The Almodovar Hotel is Berlin’s greenest hotel, but it’s also located in one of the city’s coolest neighborhoods, steps away from Boxhagener Platz in the lively neighborhood of Friedrichshain. The interiors of the public spaces and its 60 rooms are clean and modern, with white and wood surfaces and warm lighting.

A one-room suite innovatively designed with repurposed wood, Plus One is hidden within an apartment house near gritty-yet-buzzing Hermannplatz. The “plus one” refers to the network of 24 locals (from musicians to cafe owners) that guests can spend time with. For every two- or three-night stay, an experience (from shopping to art gallery openings) with a local is included. “All the best places in Berlin are hidden,” says owner Clare Freeman.

Where do chefs like Thomas Keller and celebrities like Nicole Kidman get their porcelain? Hering Berlin, a small, artisanal tabletop company founded by Stefanie Hering. “I wanted to create a dish, a bowl worthy of the vegetables that we work so hard to grow,” says Hering. For such poetic handiwork one pays the price; a dessert plate can start at $145. This year Hering opened an intimate showroom on the ground floor of Berlin’s new Waldorf-Astoria hotel.

Manufactum’s motto: “The good things in life still exist.” That’s clear in the two-story emporium, a department store of beautifully made, extremely functional heritage products sourced from all over Europe. A corner of the Berlin store (there are nine outlets in Germany) is dedicated to food items made in European nunneries and monasteries. Buy high-end bread and butter next door at Brot & Butter.

Kantine at David Chipperfield began as a temporary restaurant run by Maren Thimm and Gary Hoopengardner. It served upscale comfort food mainly to employees of a nearby office. Kantine shut down while the offices were under construction, but reopened this summer in a sleek, minimalist building. The menu is small, featuring classic German dishes like Senfeier (boiled eggs with mustard sauce, spinach and mashed potatoes) and changes daily.

This historic market hall, first opened in the late 19th century, is having a born-again moment. Beyond offering fresh local produce and artisanal products, the market serves as a community hub. And it keeps growing: This past spring the Heidenpeters brewery opened up in the cellar, and this summer the market debuted Street Food Thursdays, where a rotating crew of chefs and foodies sell everything from BBQ sandwiches to pork buns to vegan desserts.

Click here to read more from our Global Guide to Local!