Huge, hulking glaciers and smaller floating icebergs cover giant swaths of the planet’s surface – around one tenth of the world – and are found in over 35 different countries. Now, as the world warms and the ice melts faster than climate scientists’ earlier predictions, we face an unanticipated race. Which will move faster: The […] 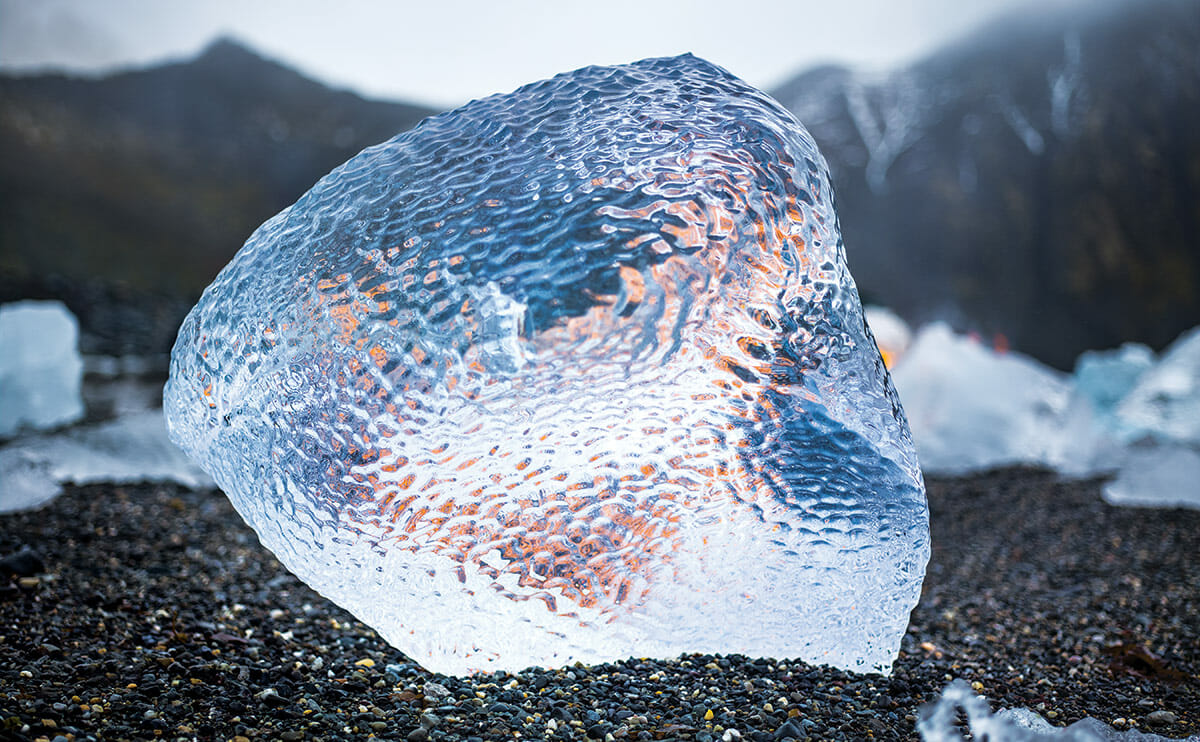 Huge, hulking glaciers and smaller floating icebergs cover giant swaths of the planet’s surface – around one tenth of the world – and are found in over 35 different countries.

Now, as the world warms and the ice melts faster than climate scientists’ earlier predictions, we face an unanticipated race. Which will move faster: The thaw or the opportunists moving in to capitalize on it?

Global warming is presenting a novel economic climate for a new breed of hustler, poised to make money on the meltdown. From water to vodka to the creation of artificial glaciers in India, icebergs have never been hotter. One Canadian water company produces 50,000 bottles of its Iceberg Water annually. A Newfoundland entrepreneur sells nets to tow icebergs out of the way of oil rigs for over $100,000 a pop.

More recently, Icelandic glaciers have become the focus of a multimillion dollar glacier water scam. According to a July 2013 Harper’s story, roughly $20 million of investor money disappeared into a company called Iceland Glacier Products, run by a Canadian dentist turned entrepreneur named Otto Spork. With a history of bamboozling investors and hiding out when the heat is on, Spork was planning to sell bottled water from an Icelandic iceberg and send bulk amounts of it around the world in converted oil tankers.

Neither goal was realized before the scheme collapsed. Canadian authorities began investigating and angry investors sued, but got only a fraction of their money back.

Even after all that, Harper’s journalist McKenzie Funk discovered that Spork is still peddling Icelandic iceberg water, now under a new company name. (According to a recent tweet, SNO Water will soon be available for purchase on eBay and Amazon.) Are iceberg water entrepreneurs the modern-day snake oil salesmen?

Maybe, maybe not. The market potential of icebergs is uniquely compelling. Even in casual conversation, it’s easy to start speculating about what potential treasures can be extracted from nature’s frozen time capsules.

Dutch businessman Guus Backelandt is one guy diving headfirst into the iceberg business. In 2008, he partnered with the Canadian Iceberg Vodka Corporation, which already uses iceberg water to distill vodka, to develop a premium brand of bottled water called Iceberg Water. It was introduced in Europe last year, grabbing attention from British media outlets like the Daily Telegraph for its price (up to $21 a bottle) as much as its purity.

Backelandt first visited Newfoundland’s famous “Iceberg Alley” (an area stretching from Baffin Bay on the west coast of Greenland to the east coast of Newfoundland) in 2008. “I couldn’t understand why no one was making use of this amazing natural resource,” he says. “It was life changing to be in the shadow of such giant gifts from nature.”

Today, Backelandt produces some 50,000 bottles of Iceberg Water annually, selling his product to European countries, such as Spain, the Netherlands, Belgium and France, with plans to begin distributing to the United Arab Emirates and the United States this year. Demand is up, and he anticipates that he’ll be producing between 75,000 and 100,000 bottles in 2014.

But extracting water, Backelandt says, is no easy task. To be harvested, an iceberg needs to be broken into manageable pieces before it can be hoisted aboard. That often means big boats, cranes and nets. Since the early 1800s, schemes to harvest ice have cropped up, often just to die in the planning stages. Icebergs are big. Water is heavy. And the mechanical obstacles relative to the cost to extract are large – particularly if you want to move a large chunk of ice a long way. Towing an iceberg is a challenge, requiring powerful boats and insulating skirts to move hefty, slippery and fast-melting freight.

There are other political dimensions to consider as well. For instance, who has rights to the ice? This political angle is mostly relevant in the Northern Hemisphere, where the smaller icebergs live. Antarctic ice, according to Robert Brears, a New Zealand researcher who specializes in water issues, is just too big and dangerous to harvest. “You have an iceberg, it could be the size of a city,” Brears says. “How do you tow that?”

Still, the dream persists. And so do the entrepreneurs. Water is fast becoming one of the world’s most sought-after commodities. Researchers estimate that by 2030, global water demand could outstrip supply by 40 percent. In 1973, two scientists at RAND Corporation penned a 96-page paper on the feasibility of icebergs as a fresh water resource. That’s about the time a man named Terry Spragg got involved. Spragg was, among other things, making ski movies, but after reading the RAND report, he introduced himself to the researchers. Before long, they were all collaborating with Prince Mohammed al-Faisal of Saudi Arabia on a plan to tow an iceberg to the Middle East. But the plan soon fell apart. “If you think about it, taking an iceberg, it’s tough to handle,” says Spragg, inventor of the water-carrying Spragg bag.

French engineer Georges Mougin still thinks long-distance iceberg transport to bring fresh water to those in need is a viable idea. In 2009, Mougin (who had also previously partnered with Prince al-Faisal to explore towing in the late ’70s) began collaborating with a technology firm to create 3-D simulations of a potential iceberg tow. By 2011, Mougin and his team had apparently cracked the code. A video of a successful simulation started making the rounds online, modeling how an iceberg from the Newfoundland region could be moved to the Canary Islands off the coast of Africa. No trials have happened yet.

At the same time, towing technology is improving. In the case of Iceberg Water, Backelandt’s colleague, Captain Ed Kean, scours Iceberg Alley in Newfoundland with a small crew, identifying possible icebergs to farm for the season, which can last between April and July. Of the hundreds of icebergs that pass through here annually, Captain Kean will usually harvest only two. He employs a variety of means to farm the icebergs, hacking and breaking them into pieces which are then hoisted onto his boat with a crane. In an average year, they process about a thousand tons of ice.

To many scientists, unlocking iceberg water isn’t a serious discussion: Most water experts focus on desalination or rainwater capture. But giant ice still exerts a strong hold on the imagination. When Modern Farmer asks Dr. Mark Serreze, director of the National Snow and Ice Center at the University of Colorado in Boulder, what, besides cold-filtered alcohol and water, could be made from glaciers, he laughs. “I drank, in a martini, ice from an ice core in Antarctica once,” he says, explaining that scientists drill down thousands of feet to take ice samples that help record the climate history of the planet. Sometimes, extra samples go in scientists’ drinks, and these cubes of compressed ice gurgle and fizz. But in order to get at this ancient ice with its “audible fizzes,” Serreze notes, you’d need a huge drilling rig. Investors, anyone?