Atlantic Caviar & Sturgeon, just outside of Lenoir, NC, is the first and only aquaculture farm in the United States to sell Ossetra caviar, which comes from the Acipenser gueldenstaedtii, or Russian sturgeon, and is second only to the exquisite Beluga in terms of quality and price. In the Caspian Sea — the longtime supplier […] 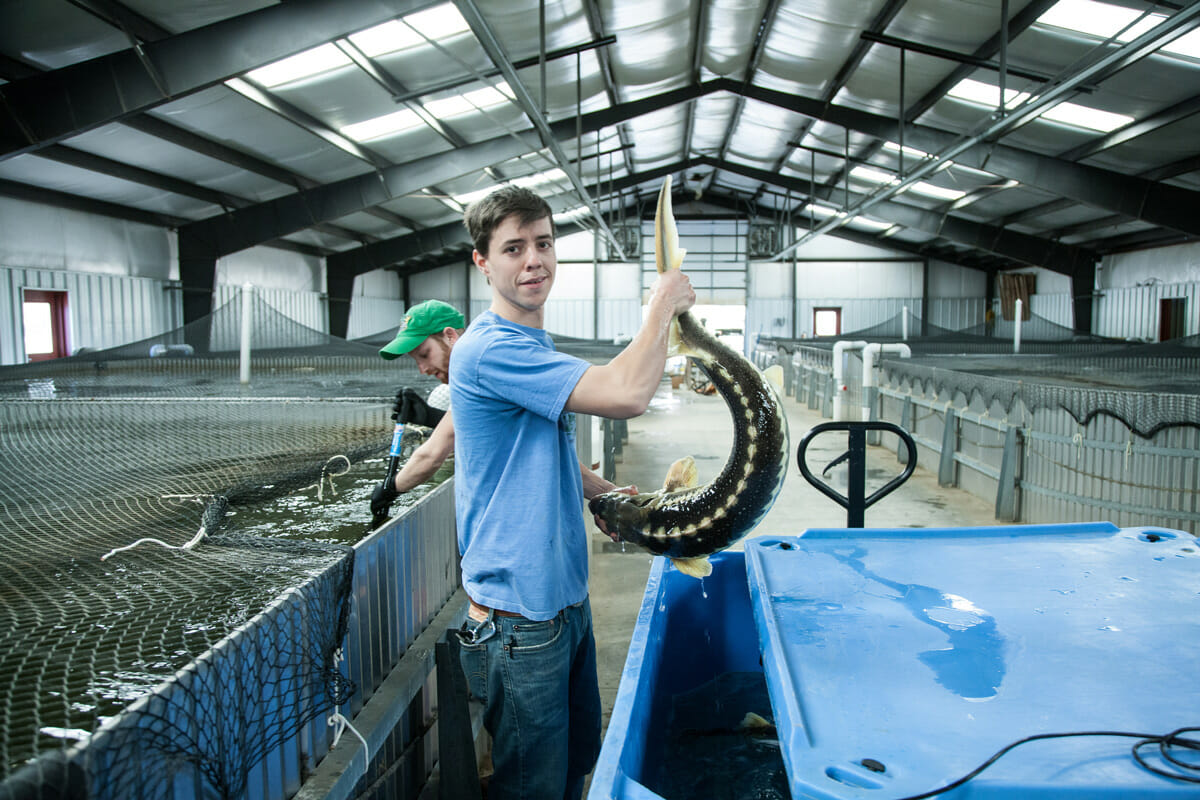 Atlantic Caviar & Sturgeon, just outside of Lenoir, NC, is the first and only aquaculture farm in the United States to sell Ossetra caviar, which comes from the Acipenser gueldenstaedtii, or Russian sturgeon, and is second only to the exquisite Beluga in terms of quality and price.

In the Caspian Sea — the longtime supplier of the majority of the world’s sturgeon stock — overfishing, pollution and sewage entry have had disastrous effects on the populations of fish that produce the black gold. In fact, the sturgeon population in the lower Volga river region is all but gone, less than 1 percent of what it was 15 years ago. This has lead to worldwide bans on fishing wild sturgeon and embargoes on Russian caviar. Still, the global demand for caviar hasn’t waned, and aquaculture farms have started to pop up around the world to supplement the thinning stock of caviar from wild sturgeon. As a result, caviar aquaculture — a difficult operation requiring a great deal of overhead — is quickly becoming a promising business endeavor. Despite the global financial crisis, caviar is one of a small group of luxury foodstuffs that has maintained a stable market price, with a wholesale price of about $590 a pound (1,000 euros a kilogram) for most sturgeon varieties.

. Despite the global financial crisis, caviar is one of a small group of luxury foodstuffs that has maintained a stable market price, with a wholesale price of about $590 a pound (1,000 euros a kilogram) for most sturgeon varieties.

Atlantic Caviar & Sturgeon bought its first batch of juvenile sturgeon, or fingerlings, from a German hatchery in 2006. Today the farm houses about 16,000 fish, a mix of Russian, Siberian and Atlantic sturgeon in a 32-tank system. Every tank holds about 20,000 gallons of water that supports 10,000 pounds of fish.

Joe Doll, one of the co-founders of Atlantic Caviar & Sturgeon, landed on the idea of a caviar farm after spending several years as a cargo pilot running trips back and forth between Asia and the United States. Doll had developed a taste for caviar as a child: He had an itinerant businessman for an uncle who would bring Russian caviar back from his trips abroad, and his father had even tried to create his own roe-based aquaculture operation, harvesting eggs from mountain trout. So he sought caviar out during his trips overseas.

“I flew a lot down to Australia and back up through Hong Kong or Taiwan and Japan and any of those routes always had a fuel stop in Eastern Europe,” says Doll. “That’s where I really looked for the caviar — it was there that I saw how it was made, who was making it, and learned a bit about the market itself.”

Doll flew trips of this kind for about ten years, and during that period of time he began to notice the growing scarcity of wild caviar. The thought hit him to start a farm.

Doll, together with three partners — who together make up Atlantic Caviar & Sturgeon’s parent company, LaPaz — built the aquaculture farm just outside Lenoir in the early 2000s. In 2008, one of the founders of the LaPaz Group and the primary investor in Atlantic Caviar & Sturgeon, Bill White, died of cancer. He bequeathed his portion of the ownership to North Carolina State University and provided the funding necessary for the farm to operate until it became self-sustaining. Since then, two NC State professors and Cooperative Extension specialists have worked closely with the farm to refine the process of raising the sturgeon in a financially viable and sustainable way. As a result of the cooperative agreement with NC State, Atlantic Caviar & Sturgeon also serves as a research facility for both sturgeon and more general aquaculture, and as an internship program that allows students at North Carolina universities to train on-site.

Atlantic Caviar & Sturgeon began selling its first batches of caviar in 2012, at which point the operation had already been several years in the making. The company has met with early success, selling mostly to distributors in New York and in the South, even providing sturgeon fingerlings for an additional aquaculture facility in eastern NC, which is still in the very early stages of production.

However, a working petition to the U.S. Fish & Wildlife Service as well as the National Marine Fisheries Service (NMFS) could introduce some challenges to the growth that Atlantic Caviar & Sturgeon and farms like it have experienced up until now.

The petition requests that ten species of foreign sturgeon be labeled as endangered under the under the Endangered Species Act (ESA), including Siberian sturgeon (Acipenser baerii) and Russian sturgeon (Acipenser gueldenstaedtii), the two species of fish that Atlantic Caviar & Sturgeon harvests the majority of its caviar from. It could make it illegal to possess or sell caviar from those species listed as endangered.

Jeff Hinshaw, professor of Biology at NCSU and advisor to Atlantic Caviar & Sturgeon, thinks that there should be a clear distinction in the petition between populations of foreign sturgeon in aquaculture farms and in the wild.

Most of the responses to the petition from people involved in sturgeon aquaculture, like Dr. Hinshaw, weren’t directly opposed to protecting the sturgeon; they simply requested that farmed sturgeon be considered separate from wild populations.

Arguably, the existence of caviar farms in the U.S. and elsewhere are a boon to conservation, and not an obstruction.

Because the sex of the sturgeon is indiscernible for so long – it takes around eight years for the sex of the sturgeon to show and several additional years for the sturgeon, if female, to begin to produce roe – the farm inevitably ends up with roughly half of its sturgeon population being male. (“Sturgeon are pretty mysterious fish,” Wally says. ) The farm doesn’t breed their own fish so the males are utilized exclusively for their meat, which is either smoked or filleted. The meat from female fish after their caviar is harvested is also sold, which increases the market value of a fish that is inevitably killed when its eggs are extracted.

“I don’t think there’s a huge market for sturgeon meat in this country, Dr. Doukakis-Leslie says. The lack of an aggressive marketing effort means sturgeon in the U.S. is mainly sold to niche markets.

Wally is trying to change that, promoting more exposure to sturgeon meat, hosting taste-tests and marketing the fish to both exporters and area chefs.

The future looks good for AC&S, notwithstanding the roadblocks to caviar and sturgeon farming that could be introduced with the EPA petition.

“We believe there could be several more caviar farms in North Carolina,” Doll says. “Though first we have to make sure that there is a market and a need; and we’re just at the stage of learning those things.”

Where can I purchase this caviar?

Would love to bring friends from Blowing Rock to see your facility. (And buy caviar) Is that possible.