Woollie: Behind the World’s Most Terrifying Sitcom Mascot 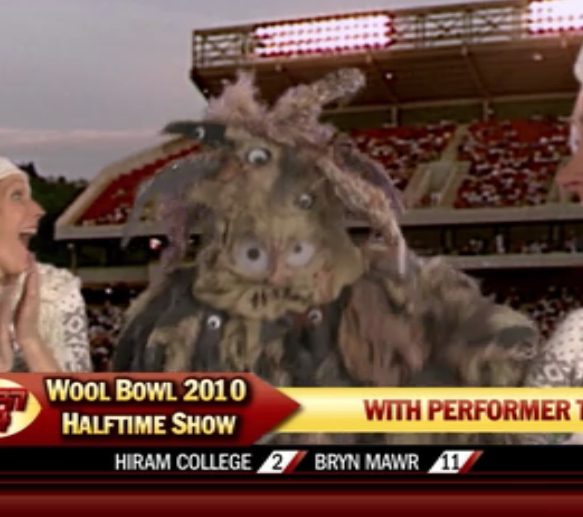 When Woollie enters a room, heads turn. How could they not? Woollie’s hulking body, made up of raggedy scraps of densely-knit fabric, sways mightily as he shuffles back and forth. If you feel like Woollie is staring at you, well, yes, he is. He has hundreds of eyes, all peering out from different levels of grey wool, and they don’t blink.

Among other things, Woollie lacks eyelids. Woollie doesn’t speak or, at least, no one has heard him speak. He just shakes and stares and haunts your dreams.

Which is precisely how “30 Rock” co-creator and Emmy-winning television writer and producer Robert Carlock wants it. “I don’t think of Woollie as a mascot,” Carlock says in a phone interview for which he graciously agreed to talk about a glorified prop that he invented about three years ago. “He’s a real sentient creature.” Carlock pauses, correcting himself. “He or it,” he says. “Woollie is probably a hermaphrodite.”

Carlock dreamt Woollie up as a bit player in the finale of the fifth season of “30 Rock,” an episode called “Respawn.” (To view episode, go here.)

It all started with this sketch, exclusive to Modern Farmer: 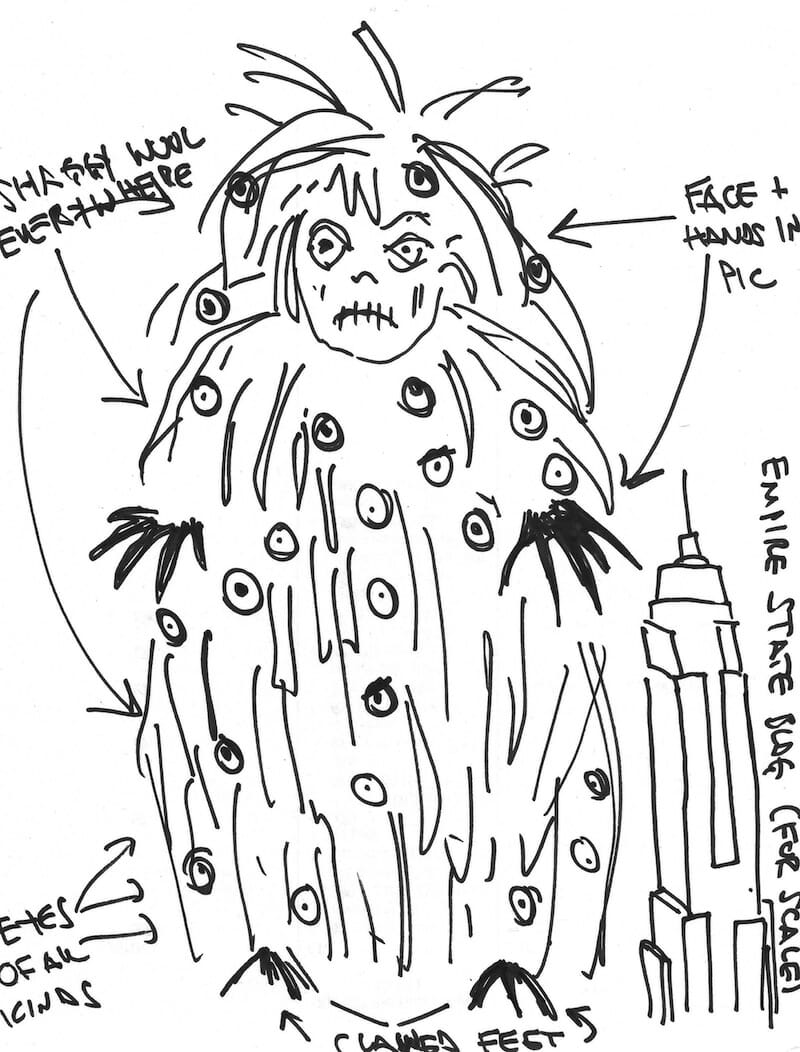 The mascot – a puppet with a person inside – appears for only a few moments in a few scenes of this episode. Woollie shimmies behind Jenna (Jane Krakowski) as she appears in a clip singing during the “Wool Bowl,” a fictitious college football game. (Per usual, Jenna is clueless about the social import of her presence; the announcer introduces her as “a singer, everyone!”) Then, later, when Jenna gets asked to be “the celebrity face” of wool, Woollie sits alongside an animatronic sheep (more on that later) and the head of the Wool Council (played by the stately Victor Garber) at a grand table.

For so little screen time, Woollie made a big impression on “30 Rock” fans (me) and Carlock himself. “Woollie has nothing to do with the story, really,” Carlock says. “I was trying to think of a not-terribly sexy thing that Jenna could be celebrity face of. It was always fun that she would get any kind of attention. So, as opposed to the Cotton Bowl, we had the Wool Bowl.” Like everything in the show, even the throwaway bits get great attention from the staff. While Woollie doesn’t do much, the Wool Council does move the plot along – Jenna is forced to be normal (or “wool”) and that tests her relationship with cross-dressing Paul L’Astname (Will Forte).

But that is only one of multiple overlapping plots. Carlock brushes off the suggestion that it was taxing to come up with Woollie – “we work like 16 hours, we could take 15 minutes” – but does admit that they had great freedom as a show to go in these strange directions. Case in point: the animatronic sheep. 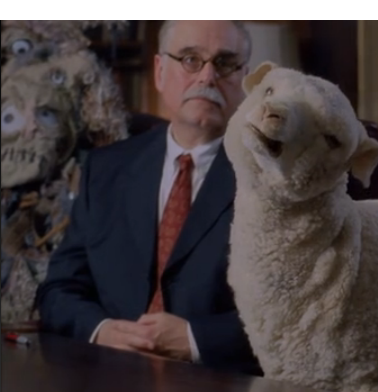 The sheep gets even less screen time (it appears in a scene showing the Wool Council discussing the “lifestyle clause” and the alternative sexual escapades of celebrity wool spokesperson Jenna) than Woollie but came at far greater expense (members of the prop department, after all, are “Saturday Night Live” pros). “I wanted a real sheep,” Carlock says. “But there’s some city code, so we couldn’t have a hooved animal or whatever. We tracked down, in LA, the company that made the polar bear from ‘Lost’ who made us a very realistic but not totally convincing sheep sitting quietly at the table.”

“Not totally convincing” understates the case. Like Woollie, this sheep has a certain terrifying quality. Let us look again:

But that animatronic sheep didn’t come easily. “We had to fly it in. We may have spent money on flying an operator, too,” Carlock says. “It came in like a super star, that thing. We were all waiting for that robot sheep so we could start shooting.” And even when it came, getting the remote-controlled machine to work was no small feat. It was supposed to nod and turn to look at Jenna, but because the sheep’s head moved so slowly, none of that was possible.

The result, though, is marvelously fake: just one long, weird look at the camera.

And what of the technical demands of Woollie? “It was more like a mask than a costume,” Carlocks says. “A mask of wool and eyes.” “Our wardrobe people were pretty used to weird requests so they took [my drawing] and made it better,” he says. Originally, he had wanted “some fangs” but the puppet maker convinced him it wouldn’t show through the mass of wool. Two things that weren’t visible on TV were Woollie’s hands – “terrifying, gnarled claws” – which were a wardrobe employee’s idea. And what was it like shooting with Woollie, a robot sheep and award-winning actor Victor Garber? Garber’s meliflouous voice declaring things “very wool” perfectly suited the classy environs of the Wool Council. “He really leaned into ‘very wool,’” affirms Carlock.

In terms of casting, Carlock knew Garber a bit personally – “he lived across the street from me” – and found his dignity and good looks to be right. “He had all the skills and looked great in a suit, next to a sheep and a monster,” Carlock says. “He might have given an amused raised eyebrow when we asked him to do it, but he was very game.” 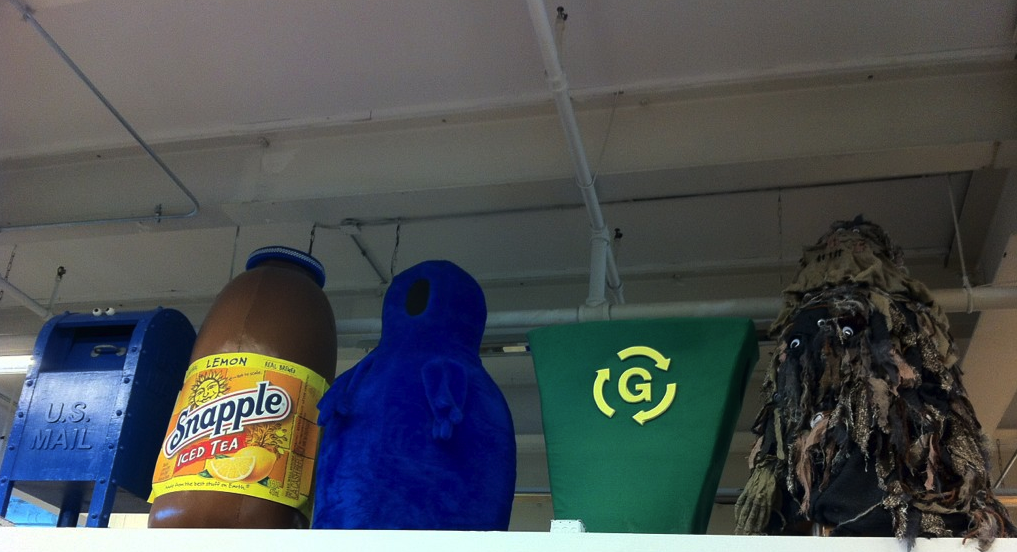 These days, Woollie is not, as Carlock imagines, roaming the hillsides, feasting on pigeons. Woollie’s whereabouts are not totally known, but it appears to be in a Canadian storage facility. In our hearts, though, Woollie is very much alive, looking through us with those many eyes. (“The prop was the most terrifying thing I had ever seen,” writes producer Luke del Tredici in an email.) Even after the episode, Carlock says he was “constantly thinking about Woollie.”

“Our office was in old bread factory and we had space where we put old costumes. Woollie was up there, next to the Snapple bottle, Greenzo. We could see Woollie looking down on us and it was very creepy at night.”

Sadly, Woollie never made it back on the air. “It was hard to come with a reason. At some point, we did want to see him in the last episodes, maybe in the crowd, walking through.” But those fleeting moments with Woollie worked to affirm Carlock and the crew’s greater faith in the work of “30 Rock” – work that will hopefully continue as Carlock and Tina Fey are starting on another NBC sitcom. As its fans can attest to, the show committed to its world totally, filling each episode with dense jokes and recurring plot lines and shows-within-shows and fake catchphrases that became real catchphrases (“I want to go to there,” “Blergh,” “Jump up your mother!”). The effort that went into creating Woollie and shipping a robot sheep from across the country for one scene embodies that ethos.

“It was something we could do. We could have Victor sitting there, a guy in a wool costume, and yup, a mechanical sheep sitting there all day,” Carlock says. “We knew moral right was on our side. We knew history would judge us favorably.”

“You only have so much control over Woollie.”

“No, it’s an evolutionary thing. If you’re the only member of your species and you have hundreds of eyes, that will make you insane. You are seeing everything around you. Woollie lives in a prison of sight.”

“There is a stench.”

“There is a great loneliness with Woollie. He can’t reproduce.”

“Also, a sadness. A quiet dignity.”