Meet The Spanish Peas That Sell for $350 Per Pound

How a Spanish farmer turned a humble legume into a $350 a pound superstar. 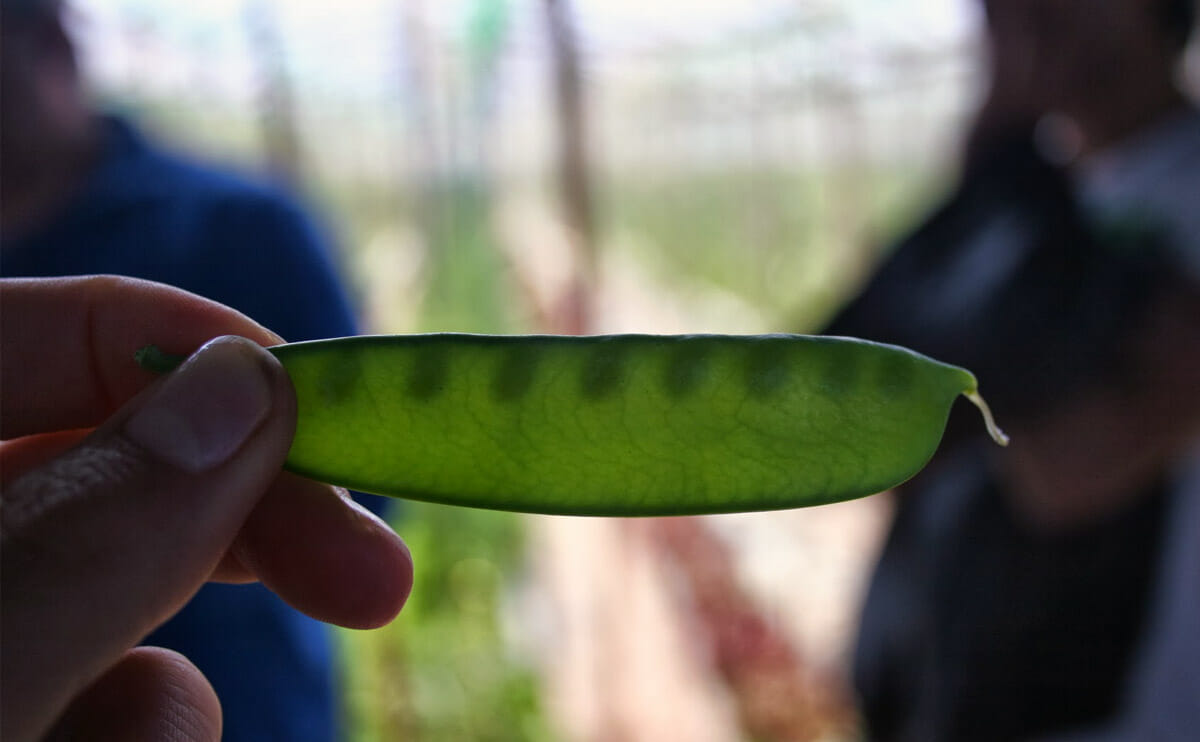 The surrounding hills, cut steep and sloping to the Cantabrian sea, are bright green in the midday sun. “When the Michelin inspector is coming, they call us,” says Burgaña, referring to the area’s top chefs. The reason he is at the receiving end of the emergency Michelin star hotline? That can be found in the fields under his feet.

Burgaña’s farm, Aroa, is twelve acres tucked into nearly vertical hills along the ancient pilgrimage road El Camino de Santiago. Aroa is located just outside Getaria, a 2,500-person village in northern Spain’s Basque region. Twenty miles to the east is the culinary capital of San SebastiÁ¡n, where Michelin stars are nearly as abundant as the pintxos, or Basque tapas, that weigh down the bar counters. Burgaña is known for growing a special varietal of the common pea species known as the guisante lÁ¡grima (or tear-shaped pea), a humble legume he turned into a superstar using the power of marketing alone. “It’s a diamond, so you have to dress it like a diamond,” he says. And these peas sell at diamond prices: $350 per pound.

Before becoming a farmer, Burgaña, 49, worked as a fisherman, a trade common to inhabitants of Getaria. He opened Aroa in 1990, and quickly began to set the small farm apart – it was the first farm in Basque Country and, according to Burgaña, in the entire country, to offer the now commonplace CSA box. Burgaña also hit upon a market that would revolutionize his business: chefs. Pablo Loureiro, chef at Casa Urola, a fine-dining spot in the running for a Michelin star, has been buying vegetables from Burgaña for ten years. “He knows the land very well,” he says.

“It’s a diamond, so you have to dress it like a diamond”

At Aroa, Burgaña cultivates an average of 40 crops a year, including seeds unique to the area, such as Gernika peppers, as well as crosses made in house, like the Costa tomato. “Chefs have the habit of looking for the best in every product,” says Burgaña. “Being with them, one learns to look for excellence.” To keep up, he began bringing in exotic herbs and lettuces to test in the Basque soil. Chefs loved the new produce. Burgaña kept pushing for more.

Enter the guisante lÁ¡grima. When Jaime hit on this pea varietal, preserved by his grandfather and adapted by him, he knew he had something special. These peas are best eaten raw, which is how they are served (albeit with a generous spoonful of caviar) at Mugaritz, the number four restaurant in the world according to the 2013 San Pellegrino’s World’s 50 Best Restaurants. The peas’ flavor is surprising: A crunchy burst at first bite gives way to an herbaceous sweetness. “Exquisite,” says Iñigo Galatas, the food critic for San SebastiÁ¡n’s local newspaper. “Their freshness is pure springtime. What is most fascinating is the sweetness when they explode in your mouth. It’s truly like caviar from the ground, substituting sweetness for the salt.”

The pea’s flavor is unique in part because of the growing location. In Spain’s Basque region the sea contributes a particular salinity to the air (and soil), which makes so much of the area’s produce distinct, from the local wine txakoli to the produce. “The flavor of this pea variety is a lot stronger here,” says Burgaña. Chef Loureiro agrees. “As they are planted on the coast, they have a different flavor than the ones in Navarra, for example: delicate, herbaceous, salty. When they are at their peak, they have a sweet flavor, and still carry water inside,” he says. “They are a touch salty, similar to what happens to txakoli.”

restaurants and newspapers have nicknamed this once-humble legume “vegetable caviar.”

The catch? The season is absurdly short, two months maximum, ranging from mid-March to early June. These peas are picked early, and are delicate and tear-shaped when shelled, which is time-consuming labor. It takes nearly twenty pounds of pods to produce one pound of shelled peas.

That is one reason that prices this year reached around $350 for a pound ”“ and why restaurants and newspapers have nicknamed this once-humble legume “vegetable caviar.”

How did Burgaña go about getting chefs and consumers to pay that much for a pea? It wasn’t just their unique flavor. It came down to marketing.

Burgaña saw that in order for his peas to be appreciated by chefs, he needed to convince journalists and diners to ask for them by name. He would have to take this product from pea anonymity and near extinction to the veggie A-list. Basque people are notorious fish- and meat-eaters, so Jaime’s approach was to hit hard. “A beautiful label, a beautiful package, search for excellence and try to come as close as possible to perfection,” he says. Burgaña began to spread the word about his vegetable caviar and did something atypical for a Spanish farm: Opened Aroa’s doors to journalists and visitors. Word reached national media like El Mundo and Telecinco, and eventually guisantes became “the star dish for chefs.” This attention to marketing has paid off — Burgaña keeps a list of VIPs who call him for an overnight delivery of the freshly-shelled peas.

“Jaime has been successful because he’s been the best at championing the product,” says Galatas. And the product speaks for itself: “They’re expensive, yeah, but they have an incredible amount of labor behind them,” says Loureiro. “But when the real thing is at its peak, it’s the most special thing there is. It’s an amazing pea.”

Alongside growing produce for chefs, Burgaña cares deeply about preserving local products and saving seeds from extinction. And the peas represent both. “We are trying to grow tiny treasures,” he says.