6 Seconds and a Sheep: Welcome to the World of Mutton Busting - Modern Farmer
Animals, Lifestyle

6 Seconds and a Sheep: Welcome to the World of Mutton Busting

Mutton busting is simple: children between the age of 4 or 7 clamber aboard a wild, wooly sheep and try to hold on for six seconds. 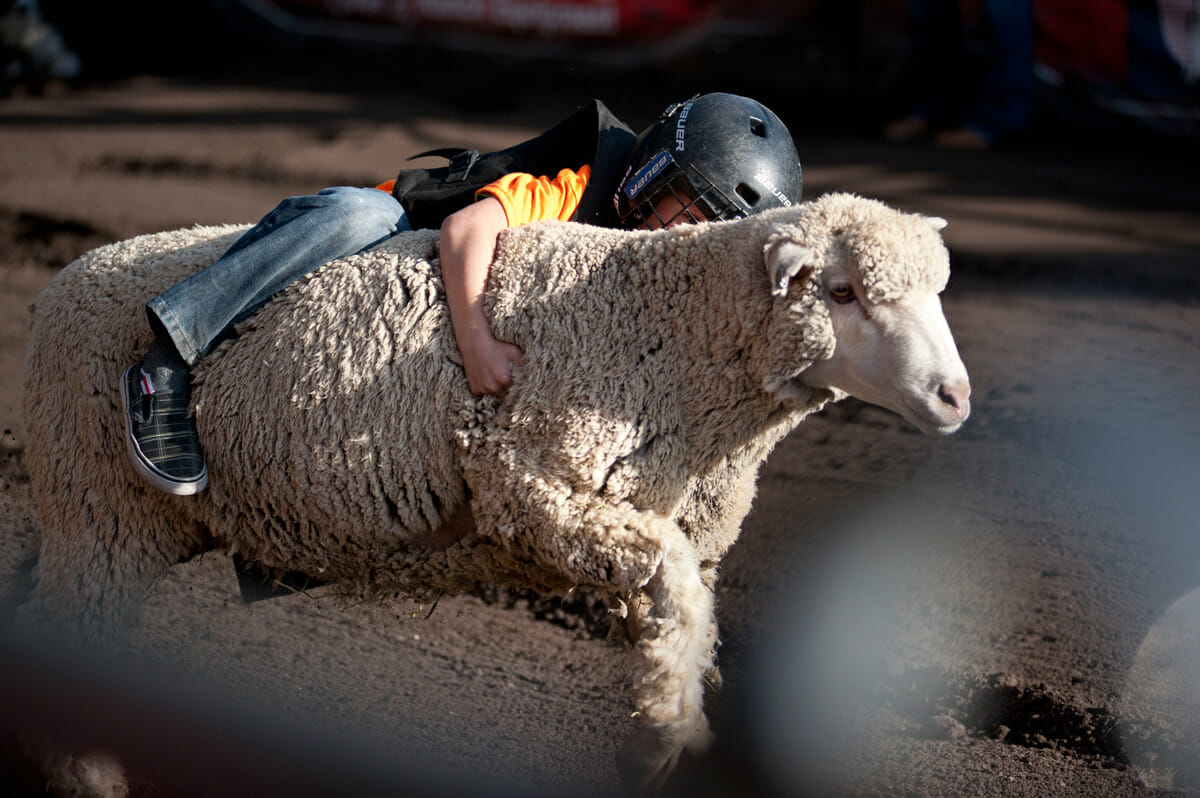 Welcome to the world of mutton busting, also known as wool riding. It’s a recreation that has been taking county fairs and rodeos by storm in which children reenact the rodeo ritual of bull riding in miniature.

There are several wool riding events around the country, but for many kids, if they’ve participated in mutton busting it’s likely they rode in a Wool Riders Only event produced by Tommy G. Productions, which also puts on events like motocross, demolition derbies and traditional bull riding. (Catchphrase: The Toughest Sport on Wool.) Tommy Giodone, the president of Tommy G. Productions, started producing mutton busting events 18 years ago. For the last 7 he’s taken them on the county fair circuit. This year they hit 9 fairs.

The sheep (about 60 ewes) are rented from ranchers in Colorado, fed on hay and rolled corn and get regular veterinary checkups.

To be a wool rider, a kid has to be between the ages of 4 and 7 and 60 pounds or less. Entry fees are between $10 and $12. Parents sign a waiver to let their children participate and kids wear protective gear, including a vest and helmet with a metal face guard on the front. Just like in the rodeo, sheep are kept in individual chutes. After the kids straddle the sheep and the animals are released into an arena, they get six seconds to try and hang on. Every first place winner in every show is invited to the Wool Riders Only World Championship. Shows go on rain or shine.

According to Carrie Stumpfhauser, who works for Tommy G. Productions helping to organize the events, mutton busting attracts kids from all walks of life. They get competitors from the city, country and suburbs, and shows can draw hundreds of riders. At the Washington State Fair in Puyallup this year, they put on 5 shows a day, attracting 40 or 50 kids to each show.

This year’s World Championship took place at The Big Fresno Fair in Fresno, California in October. Some kids traveled from out of state to try to claim the top prize, including 7-year-old Zoe Wittekiend, who flew in with her dad, Ken, from the tiny town of Fort Garland, Colorado.

“This is a very small town,” says Ken. “Where we live, it’s maybe 200 people. But everybody in town knows that Zoe is going to California.”

Ken says that Zoe was first exposed to mutton busting at a local rodeo and asked her dad if she could participate. The next year, they drove up to a fair in Pueblo, Colorado and Zoe was ready to saddle up again. She won first place and was hooked.

“I like how the sheep go fast,” says Zoe.

“I grew up on a ranch in Texas and I rode in the rodeos when I was a kid and all that, so it was pretty much ‘Let’s go, let’s do it.’ When a kid can go out there and do stuff like that, I think it’s just a great confidence builder for them.”

Ken’s rodeo experience is paying off for Zoe.

“My dad told me as long as you get your feet in the pocket of the sheep then you’ll hold on really tight,” says Zoe. “It’s a back part, it’s sort of like a pouch in the back. You can stick your feet in it. And if you get your fingers into the wool and grab on, you’ll probably stay on.”

Zoe didn’t win at the Fresno championships, and she can’t compete again because she’s aged out of being a mutton buster. But she had fun riding in her last competition and traveling to California.

“Zoe’s beating me up pretty bad about getting her a horse,” says Ken.

LOOKING FOR MUTTON BUSTIN GROUP’S AND SOME INFO ABOUT GETTING MY GRANDSON STARTED! LOOKING AROUND TUSLA OKLAHOMA AREA!

Looking for mutton busting in and around thayer mo. The ozarks of mo.

Looking to get my grandson in Mutton Busting, I live in Tecumseh, Ok.﻿

Looking for mutton busting class for my Grandkids in Enumclaw Washington