Robust and kindly, and sporting a bearish, wooly coat not unlike the flocks they devotedly guarded, the Old English Sheepdog once upon a time ruled the rolling hills and pastures of Great Britain. 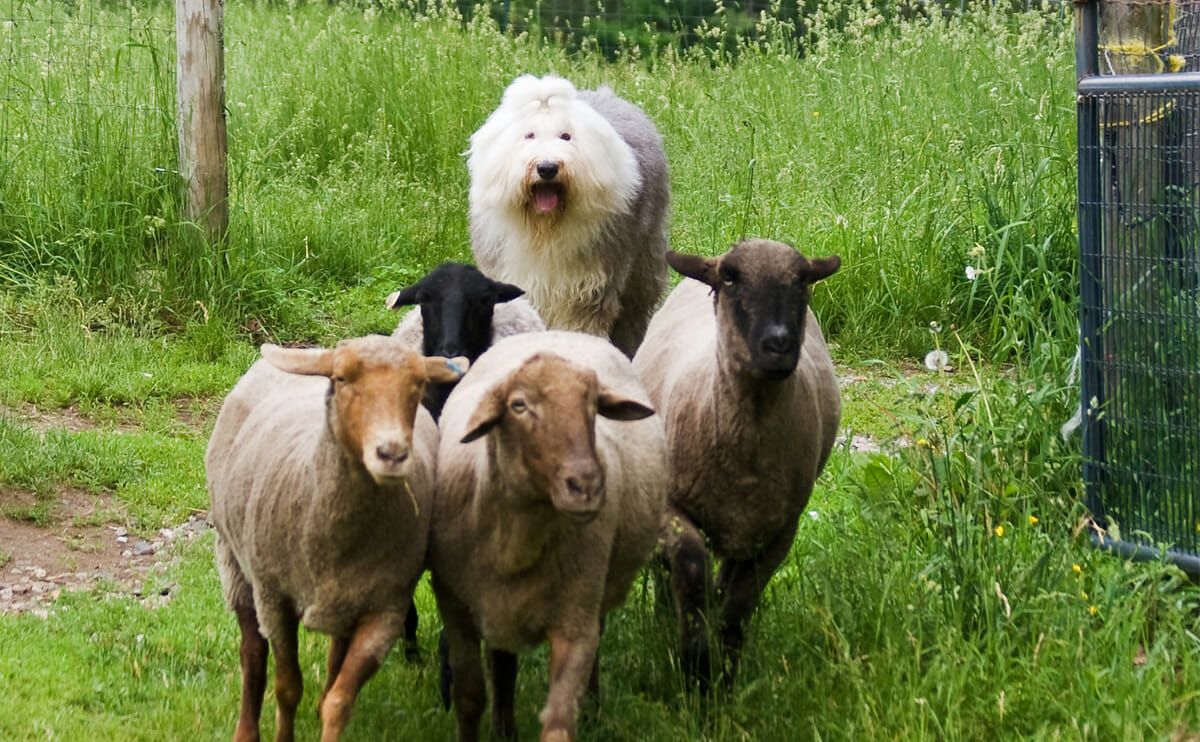 Rising to prominence in the late 1800s, thought to be a blend of Bearded Collie with a dash of Russian Owtchar, they performed as “drovers,” a working dog that moved herds long distances. It was a time when both cattle and sheep were larger and slower and the territory vast. The Old English Sheepdog was a jack-of-all trades, often a jovial mud-roller weighing in at 100 pounds, owning a bark likened to two pans being clanked together.

Along the way they were given the nickname Bobtail, because their owners docked their tails to mark them as working animals to avoid a luxury tax imposed for owning pets. Loving and loyal, stubborn and fearless, they were a herdsmen’s dog, the farmer’s servant in the fields.

That is until the American Industrialists, pockets filled with money, traveled to Great Britain for business and leisure and beheld the very furry beasts.

Pittsburgh industrialist William Wade was the first to bring the OES, as they’re known among enthusiasts, to the United States. By the early 1900s, five of the 10 wealthiest American families — the Morgans, Vanderbilts, Goulds, Harrisons and Guggenheims, all owned, bred and exhibited the dogs at New York’s 1905 Westminster show. They became wrist candy for breeders editing traits for the show ring. The new “improved” OES had a fluffier coat and more of a pet’s temperament. With each tweak, so faded the traits that once made them masters of the field. 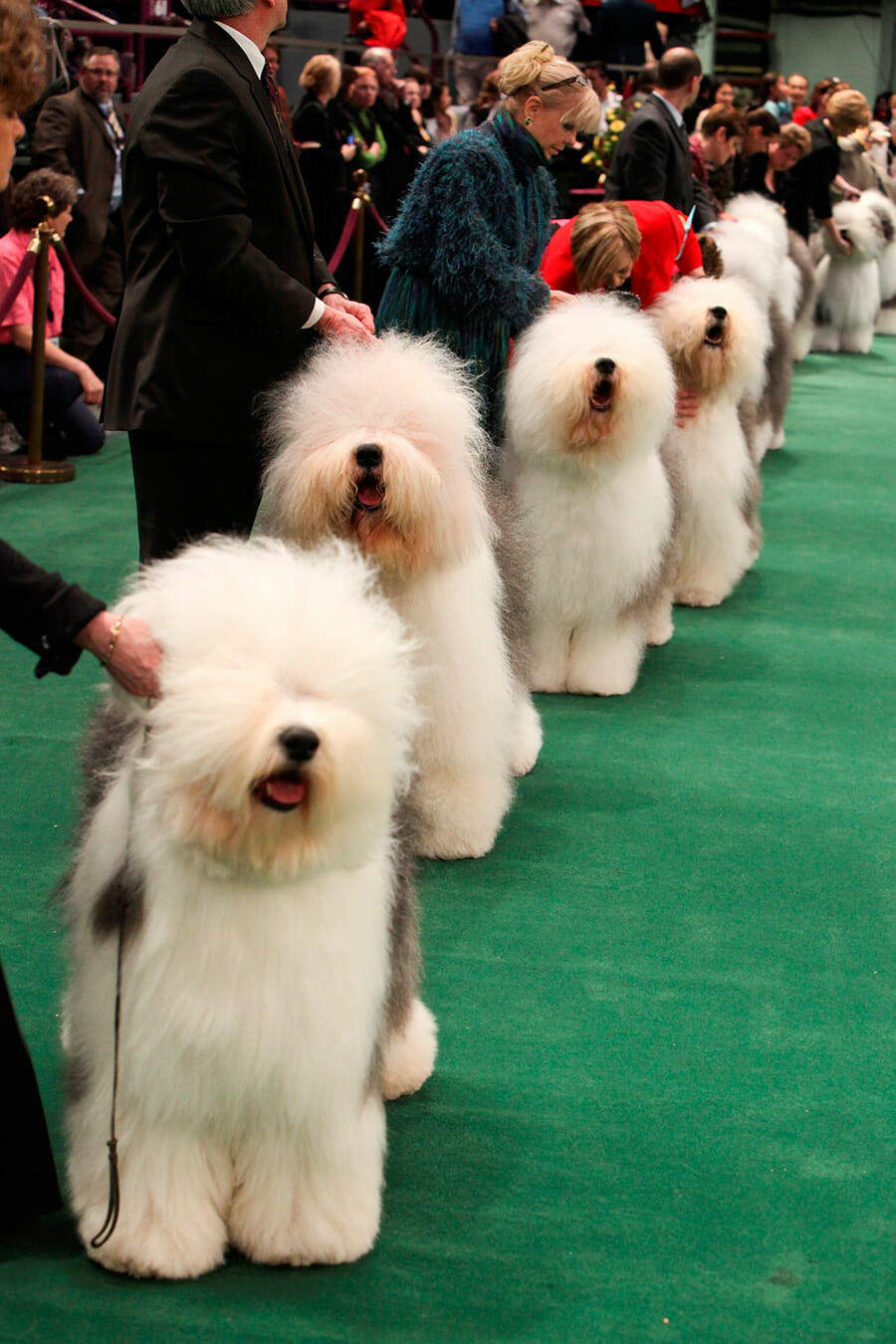 By the 1950s, the OES was one of the most popular family dogs in America, a phantom of itself portrayed in movies and television. OES’s had star turns in 1959’s “The Shaggy Dog” and “Please Don’t Eat the Daises” in 1960 and in the long-running TV series “My Three Sons.” 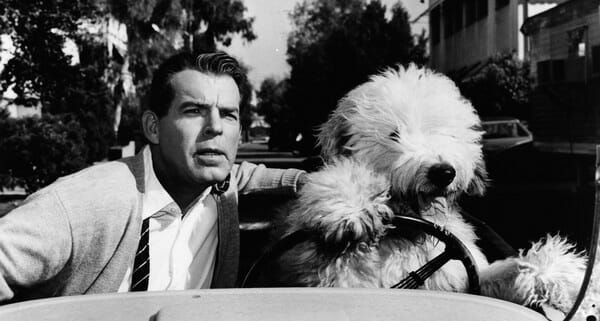 Farming, too, began to change. Herds and farms became larger and the animals smaller. Drovers were replaced by vans and trucks. The highly intelligent and workaholic Border Collie and the nipping, whirling Corgi and Australian Kelpie took over. They were all low-maintenance breeds better suited to the task. The OES, never intimidated by well-horned sheep nor wolves, fell prey to commercialism and breeding that suited the ring. By the early ’70s there were more than 17,000 OES’s registered with the American Kennel Club in the U.S. A decade later, their numbers dwindled by 10,000. Today there are less than 1,000. In both the U.S. and England, the OES is now an endangered breed that faces extinction and breed advocates are working to rekindle the love affair for the amiable, kind and intelligent puff of a dog.

In both the U.S. and England, the Old English Sheepdog is now an endangered breed that faces extinction and breed advocates are working to rekindle the love affair for the amiable, kind and intelligent puff of a dog.

Some advocates promote the OES not only as a family pet but as a wonderful herding dog for smaller flocks of sheep, goats, ducks and geese. Others sing the praises of their abundant coats, which are actually wool, not fur, for creating beautiful, water-repellent woolen yarns. Many OES owners salvage what comes out in brushing, turning it over to a local spinner.

Doug Johnson, president of the Old English Sheepdog Club of America, when reached by Modern Farmer, happens to be bundled on this day in an OES wool scarf and hat due to heavy snow in Colorado. He laments his favorite dog is a dying breed.

“It’s because of the dedication it takes to maintain these guys,” says Johnson. “It’s a labor or love. When they were herding dogs, they were shaved down when the sheep were sheared, so their coats were manageable. With the busy lives we lead, most people don’t have the schedule nor the time to keep them up. But what they also don’t realize is as a companion or family pet, the OES won’t let you down. If a farmer comes to me and says they would like a puppy for herding, I would be happy to work with them. It’s a wonderful breed and I’ve dedicated my life to them.”

Johnson also believes that it should be mandatory that any OES that is shown should first have to have to been trained in herding.

‘As a companion or family pet, the OES won’t let you down. If a farmer comes to me and says they would like a puppy for herding, I would be happy to work with them. It’s a wonderful breed and I’ve dedicated my life to them.’

“It’s still instinctual in them,” Johnson adds. “I have 12 grandkids and when they are at our house and out there with the dogs, the dogs jump on the trampoline with them and when they’re running around, the dogs are out maneuvering around them, one side to the other, herding the grandkids.”

“We see the numbers on the decline and it scares us,” says Kristine Loland who works with the Old English Sheepdog Club of America. “By not breeding for herding ability we’ve done them a tremendous disservice and we didn’t do right by them.”

It doesn’t mean that enthusiasts believe that the OES could return as a dominant farm dog. Their impractical coat, capable of growing up to nine inches long, and sweet temperament are better suited as a family pet, but their herding abilities should be honored and the trait often remains, Loland says.

Even at trials, when an Old English Sheepdog walks into an arena, “the sheep take notice,” Loland says.

But there are some who are rooting for a grand revival. Judy Asarkof, a sheep and goat farmer in Carlisle, Massachusettes is one of a handful of small farmers who choose to work with OES.

Before she had livestock, she had Mick, a now 10-year-old OES she acquired as a pet. On a lark, when Mick was three, she took him to a local trainer for herding assessment to see if he had any natural instincts. Overjoyed with the tasks, he sailed through. Asarkof was inspired to rent some farmland and purchase a few sheep for Mick to herd. It was a case of the farm dog coming before the farm. Today the 9-acre Sunflower Sheep Farm has 24 sheep raised for their wool, 10 Nigerian Dwarf Goats and some ducks who are all herded by Mick and Pele, a 4-year-old OES from Germany. Mick, though not a show dog, holds many major herding titles.

“The thing I love the most about herding is the connection with my dog, the sheep and the land as we do our chores,” Asarkof says.

Debra Lehr of Wilton, Calif. began using her OES’s for herding in 1986. Like Asarkof, Lehr, is a sheep farmer whose first dog was a family pet. She has bred sheepdogs, some that are on farms and others with “hobbyists” who don’t farm but enter their OES’s in herding trials and competitions. “If I need muscle, I use my two sheepdogs, Bea and Addison,” Lehr says. “But I also have four Border Collies.” 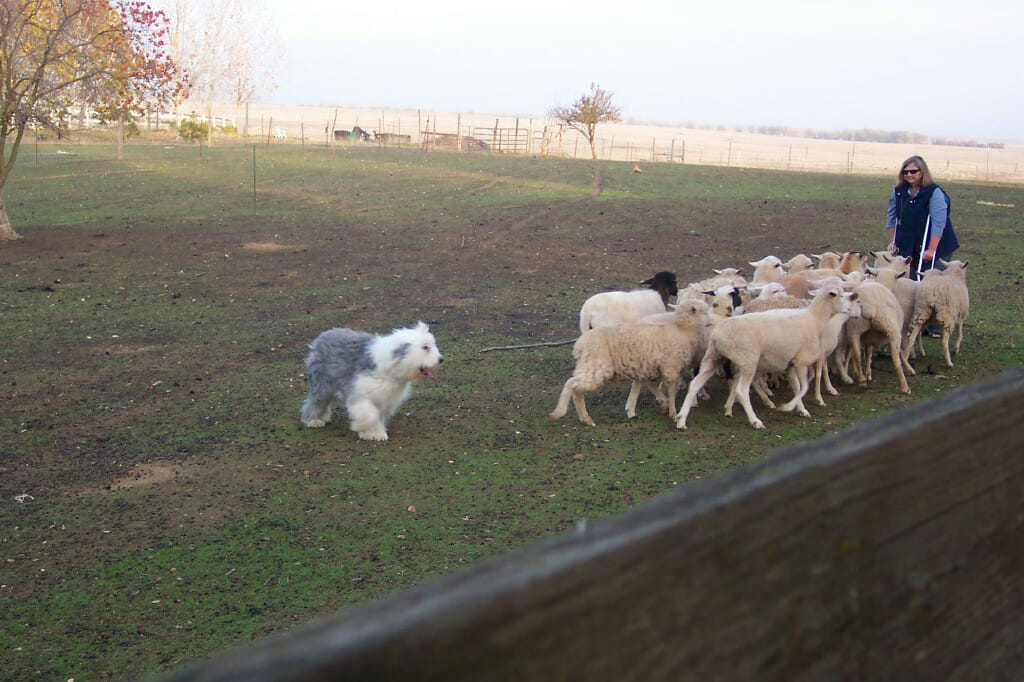 Maureen Clark of Houlton, Wisconsin has an OES bred by Lehr that she trains for herding. Although Clark isn’t a farmer, she’s what enthusiasts refer to as a hobbyist. Clark brings her herding dogs to farms where training takes place and where they get to work with herds. 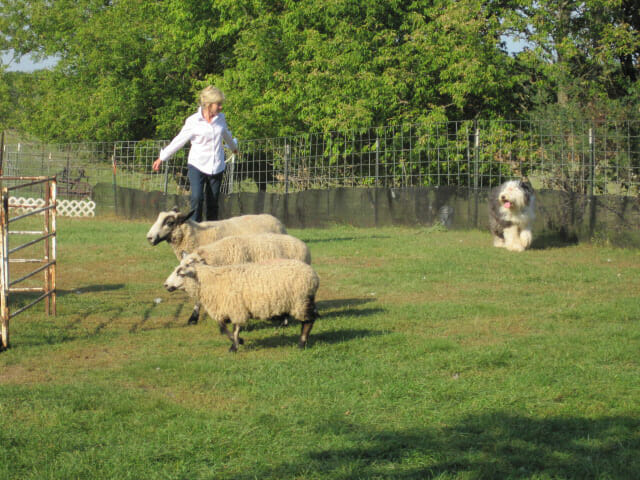 Overall, the role of working dogs in the U.S. is on the decline, according to the AKA, especially farm dogs, the taskmasters who rode the ridges, hills and valleys to move livestock. There are fewer sheep farmers. And the future seems uncertain for the OES, even as a family pet, as their numbers dwindle.

But breed enthusiasts, including farmers who delighted in seeing their dogs command flocks of sheep and herds of goats, hope that the breed will rise again.

“When they amble into the car and head down the road towards the farm they can’t wait to get there, to begin moving the sheep into a pen,” Clark says. “I see it in them. The joy, the love.”

Lori Rotenberk is a Chicago-based journalist whose work has appeared in national publications including the New York Times, The Boston Globe,Chicago Wilderness Magazine, Grist and the Chicago Sun-Times. Follow her on Twitter.

I currently own 2 OES who both go herding a couple times a week. They absolutely love it. When we fist started looking for a place where they could do herding I actually had a few people who told me that OES can’t herd. Even once we started we have been faced with many doubters usually those who own Border Collies. That being said my guys have incredible instincts and are extremely powerful when working stock. I am on OES numbers 4 & 5 and will always own them. They are the best breed loving, loyal, funny and most of… Read more »

I bred oes for 30 years best lgds ever also best babysitters lol.my lroperty backs up to large forest and never lost any livestock do to predators..they hated being indoors even on snowiest,coldest winter nights although they were always invited in they would come on for a couple minutes and sit at door begging to go go back outside.wish I had kept a puppy out of my last litter but do to ms I didnt because it was difficult to keep up with all the coat care’i tried showing for several years but they were not fans ,they were the… Read more »

the Old English sheepdog as a family pet is NOT on the decline. It has never been in the top 10 of favorite breeds and we OES fanciers like that just fine. There will ALWAYS be a steady group of fanciers, breeders and owners of this wonderful breed.

I am happy to announce that I am getting an OES in September. I am going to teach it to herd my chickens! Any advice? This is my first time trying to teach any dog to herd.

I have always had OES, and this is my 3rd. They are high maitenance on the coats and need to be sheared every Spring if you don’t spend the 10 minutes a day to groom them, and like most people who want a dog they would do well to to read as much they can about dog training. All of mine have been obedient and happy. As I type mine just came by for a hug, adorable, affectionate, and if you don’t mind the high maitenance, the best dog one could own in my opinion.

You should write a follow on article about Sheepadoodles! This designer breed will keep OES purebreds in demand.