Farm Pop: Why the Rubber Chicken?

The origins of the rubber chicken, it turns out, are mysterious. Getting to the bottom of why (or if) it is actually funny is another matter all together. 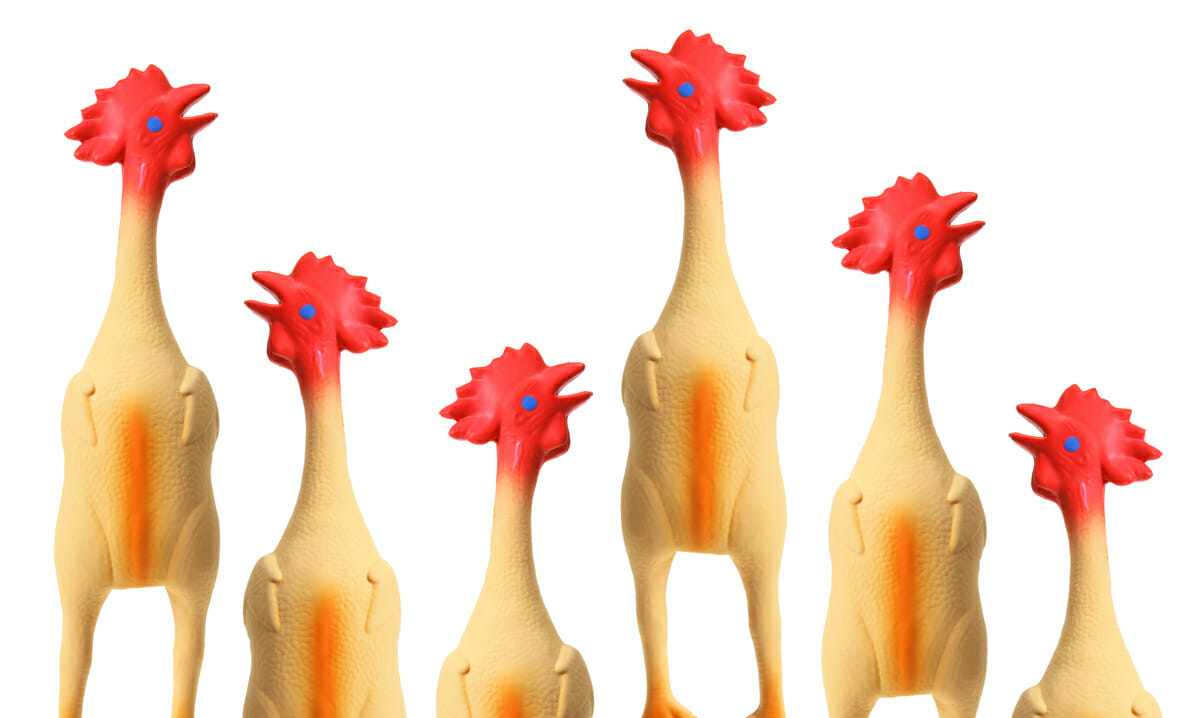 Camilla is the (now retired) mascot of NASA’s Solar Dynamics Observatory. She once made the rounds with NASA educators and astronauts to classrooms of kids around the country, wearing her own tiny rubber chicken astronaut suit. Camilla was an ambassador for science, an icebreaker. A lot of people are afraid to ask experts questions about science for fear of sounding dumb, but with Camilla in attendance, crowds weren’t so shy.

There’s just something about a floppy facsimile of denuded poultry that robs any situation of its gravity. The rubber chicken has become shorthand for things that are silly and absurd, eye-roll and groan inducing. Corniness aside, the rubber chicken has fans. There’s an annual rubber chicken-tossing contest in Iowa. The Town of Cicero in Illinois spent $1,000 on 250 rubber chickens for a popular Chicago area horror movie host to toss out during a parade. In 1993 a mayoral candidate for New York City mocked then candidate Rudolph W. Giuliani for not showing up to a debate by bringing a rubber chicken in his place. The media and masses were delighted.

The origins of the rubber chicken, it turns out, are mysterious. Getting to the bottom of why (or if) it is actually funny is another matter all together.

Lawrence E. Mintz, professor emeritus of the Department of American Studies at the University of Maryland and an editorial board member of Humor: International Journal of Humor Research, surmises that the rubber chicken may have its origins in medieval times. Chicken corpses were readily available; therefore jesters could employ them as props. Hilarity ensues!

But Mintz says the birds came into common usage on the burlesque stage where “baggy pants” comedians would whack each other with them. Burlesque was a “pretty primitive and gross form of entertainment, not just the comedy part of it but the striptease and all of that,” says Mintz.

Maybe the rubber chicken is supposed to be a bit dirty? Maybe even phallic?

“I suppose it’s a possibility,” says Mintz, sounding dubious. “Especially considering the body cavities in the chicken. But I never really thought about it that way.”

Dwight Blocker Bowers, entertainment curator of the at the Smithsonian’s National Museum of American History, could also only guess about where the rubber chicken comes from. The collection he oversees includes (among other things) Dorothy’s red ruby slippers from “The Wizard of OZ,” a “Laugh In” lunchbox and Prince’s yellow guitar — but not a rubber chicken.

“The history is obscure,” says Bowers. “But I do think it’s easily traceable to American vaudeville and the idea of using it as a weapon.”

The rubber chicken could have been a variation on a slapstick, a hinged wooden device that comedians would use to produce a loud “slap!,” or, in yet another example of the butcher store making its way onto the stage, an inflated pig bladder, which was also used to smack people. Rubber chickens would have risen in the 1900s, Bowers guessed, along with plastic and latex.

One reason the rubber chicken may have become a comedy mainstay is because a chicken is an image that crosses language barriers.

“Vaudeville thrived on absurd situations,” says Bowers. “Physical comedy was used at the time for an audience of many different ethnic types and it didn’t depend on dialog.”

Rose says they’ve been making rubber chickens since the early 1960s and it’s “unimaginable” how many they’ve sold over the years. The company sells between 10 and 20 thousand annually.

Loftus International doesn’t own a patent on the rubber chicken, and Rose doesn’t have any secret insider information on its origin. But he does have an idea of why their rubber chicken is one of the most (if not the most) popular on the market.

Loftus International has always stressed with its manufacturers that the chicken should be soft and pliable. A Loftus chicken can be tied in a knot. They carefully calibrate the yellowness of the body and the red of the comb. Duds, according to Rose, are hard as a rock and mean looking.

“Ours is warm and inviting,” he says.

Rose says he is continually surprised at the enduring popularity of the rubber chicken, although he does think they’re funny.

‘It’s almost defiant. It’s brutally witless and has no art to it. It’s in your face.’

Once, in his “sordid youth” when he was 18, Rose and some friends got ahold of a rubber chicken and put a lit cigarette in its mouth, securing it inside the bird’s beak with a length of thread.

“We found if we puffed it, it would look like it was smoking,” Rose says.

Naturally, the next step was to put the chicken behind the wheel of a car. They drove slowly up and down Salt Lake City’s State Street, popular for cruising, with just the head of the chicken poking up over the driver’s side window line.

“We thought it was the funniest thing we’d ever seen. And there were a lot of people who did a real double take on it,” says Rose.

Perhaps the only thing more mysterious than the origins of the rubber chicken is its humor factor.

When asked why rubber chickens are supposed to be funny, the Smithsonian’s Bowers paused thoughtfully before responding.

“I think the idea of using a chicken, perhaps, hitting with a formalized character or figure is funny,” says Bowers. “I don’t know why it’s funny but it is. It’s an outrageous thing,”

A rubber chicken sitting on a shelf is not necessarily in and of itself funny, says humor historian Mintz. Although he did say one of the funniest comedy routines he ever saw involved a young Bill Maher manipulating an actual chicken carcass during a routine in which the bird played the part of gymnast Nadia Comaneci.

“It’s kind of like, why do people still like The Three Stooges?,” says Mintz. “It’s almost because it’s defiant. It’s brutally witless and has no art to it. It’s in your face. ‘I’m going to laugh at this whether you like it or not, yes I know it’s not sophisticated.’”

Rose is sanguine about the rubber chicken’s mystique.

“Every once in a while,” he says, “Something is so successful it’s frightening.”

This ad for the LG G2 smartphone features a Chicken Cam: a daredevil chicken with an unusually steady head used as a steady cam. Don’t try this at home. 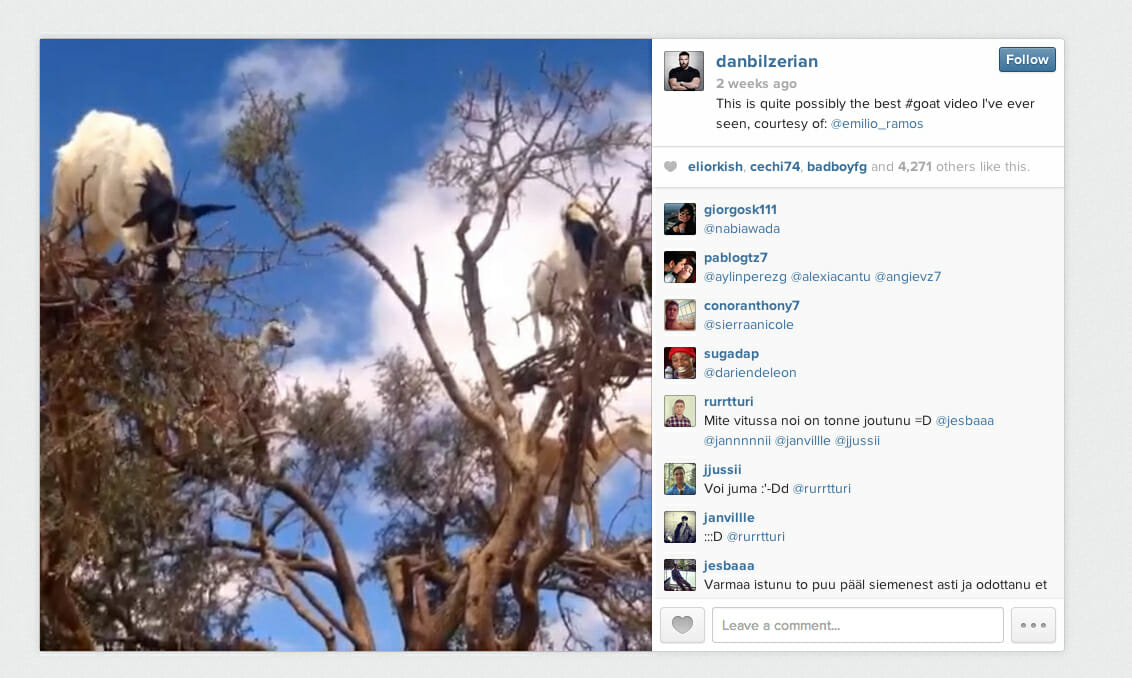 While much of high-stakes gambler Dan Bilzerian’s Instagram feed is taken up with scantily clad women, expensive cars and piles of money, The Daily Dot recently made an astute observation about his other favorite subject: Goats. This dude LOVES GOATS. He drives a car with a vanity license plate emblazoned with “THE GOAT.” Dan, meet Goat Cam.