This Is How You Grow the Obamas’ Christmas Tree

Modern Farmer: What makes for a perfect Christmas tree? John Wyckoff Jr.: That’s like asking, in our business, what makes for the perfect tractor? You got to look at the parts that go into it, the manufacturing quality and everything else. We start by selecting specific species for specific soil types on the farm. We […] 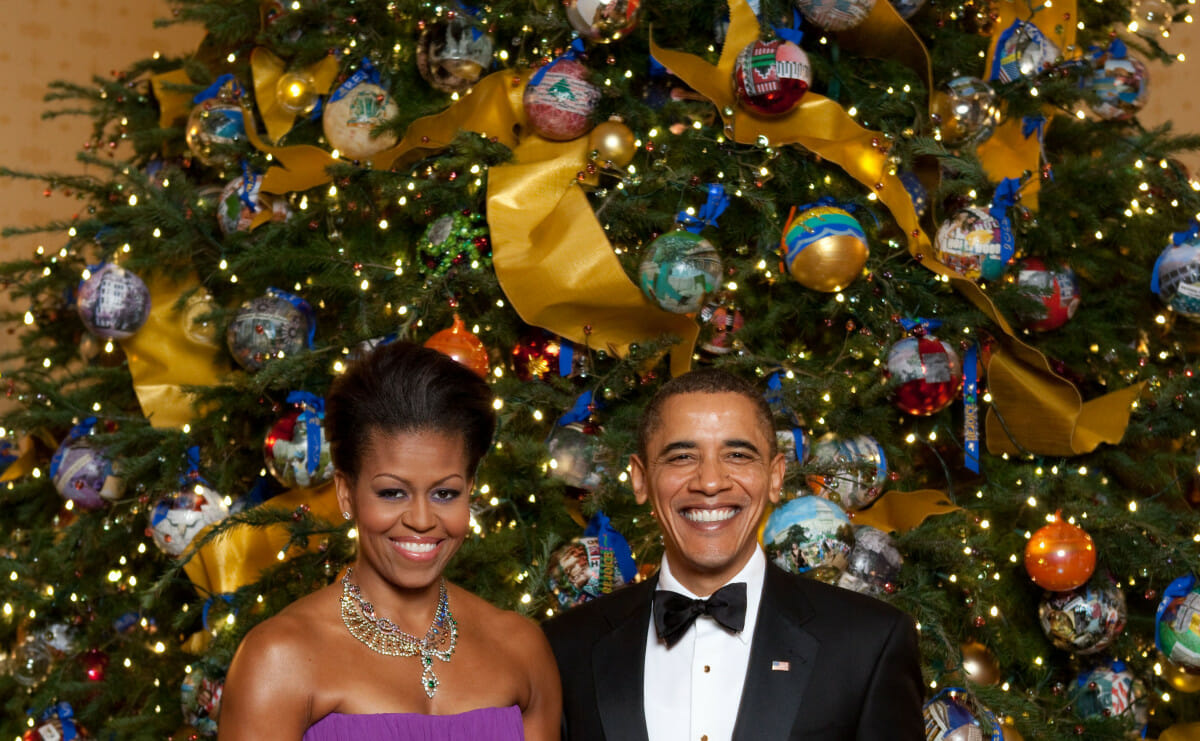 Modern Farmer: What makes for a perfect Christmas tree?

John Wyckoff Jr.: That’s like asking, in our business, what makes for the perfect tractor?

You got to look at the parts that go into it, the manufacturing quality and everything else. We start by selecting specific species for specific soil types on the farm. We are very site specific on where we will plant different species of trees. You got to deal with your nutrients and pH. While a Fraser Fir likes a pH down in the mid-5s, a Douglas Fir wants to be up around 7. Also, we don’t want to fertilize Douglas Firs or Norway Spruces because they will go out of hand, but we will fertilize Blue Spruces and Fraser Firs.

We learn by trial and failure, if you will. There’s a lot of things that we’ve learned, but we claim to be no experts in the field because we constantly go to different seminars to learn to build a better mousetrap, because there’s no perfect solution.

With seed sources, there’s good stuff out there and bad stuff out there. It’s like different hybrids of corn — you can’t put something that wants wet feet on dry ground because it’s not going to produce. So we don’t ever buy from just one nursery because we don’t want to get a bad lot. If you plant it all and it’s bad stuff and it goes south on you, then you get a whole year without a crop. So we try to mix it up a little bit.

When we go out in the field looking for a quality tree, we are looking for something that has good color, that’s symmetrical, that’s been properly sheared.

MF: What’s so important about shearing?

JW: Shearing technique is a big, big part in the production of quality Christmas trees. You can’t go into the field and just let the trees go. Every tree is sheared from the time we plant it until the time we harvest it.

The first year it’s planted we just want to get it established — we don’t want to shock it, we don’t want to hurt it. We just want to try to make it live. The second year, you go and you might only make one cut, but they need to be looked at to make sure that you don’t have doubles, because if you don’t the tree is going to look like a mess. It’s like looking in the woods: some trees have “Ys” in them almost right at the ground. You want a tree that has one trunk. You don’t want a tree that has two trunks 6-inches up in it, because when people cut it and they put it the stand it’s not going to work. Some Norway Spruces, we will plant them and they will have 2, 3 trunks. Well, you got to get it down to one.

What we’ll do is we will hand shear all of our Frasers, all of our True Spruces, and Blue Spruce species. Douglas firs, Norway Spruce we will do mechanical shearing for two years before harvest. If you don’t, you end up with a perfect conical shape. That looks nice, but is difficult to decorate.

MF: What kind of tree do you start with?

JW: We prefer to plant transplants instead of seedlings. Some guys don’t agree with that, but generally a transplant is a better plant because when you sever the root, more fibrous roots comes out instead of one long root. Those roots are able to get in the ground better, able to get better moisture uptake.

MF: How far ahead do you have to plan?

We planted a lot of Norway Spruce ten years ago because the market was there for housing and for landscapes, but it went belly up and we ended up with beautiful 7 to 8-foot Norway Spruces that were just perfect and there was no market. You got to figure out what to do with it, which is just cut out prices, just like everybody else. You do it to survive, to move the product, to at least get a little bit of income. You are not making money — you are basically going hand-to-mouth. But you got to do what you got to do.

MF: Would you recommend a farmed tree over a wild tree?

JW: A wild tree, it’s not going to have the density and the shape. I am not saying there are not beautiful wild trees out there, because it’s all about what people are used to and what they are looking for. It’s all about preference.

Now, in a wild stand there could be some infestation of insects that could cause the needles to drop, but in a cultivated stand the tree is monitored for that insect, and it could be treated. That’s the only true draw back that I see to it.

My father, he says back in the 60s, 70s he planted a lot of Scotch Pine. Well, I can’t remember there being a Scotch Pine on this farm in 30 years now.

MF: Have you seen customers’ tastes in Christmas trees change over the years?

JW: Oh yeah. My father, he says back in the 60s, 70s he planted a lot of Scotch Pine. Well, I can’t remember there being a Scotch Pine on this farm in 30 years now. But that was the tree people wanted back then. Now it’s Douglas Firs, Fraser Firs, and Blue Spruces. They are easier to decorate, they are more conical. The Scotch Pines, they used to be pretty wide and heavy.

MF: How do you go about winning the National Christmas Tree Contest and getting your trees to the White House?

At the national, there are five different categories — True Fir, Douglas-fir, Spruce, Pine or Other. For those five classes, there’s a panel of at least five professionals from the industry who pick the top three in each class. Our tree was a Blue Spruce. It was just flawless, just perfect.

Now, this competition was in Arlington, Virginia. My wife and I we drove the tree down. We got down there and got to the loading dock at the hotel and I saw a gentlemen from Michigan. He had one of the most perfect fir trees I had ever seen. I got back in the van and told my wife, “I think we already got our butts kicked.” His tree was just flawless too.

Friday night we got named first in the Spruce class with our Blue, and we knew that the true competition would a Fraser Fir from Virginia from the True Fir class. For the second round of judging, they pull the first place trees out and the attendees get to vote for their favorite tree. When they named the fir from Virginia the Reserve Grand Champion we were pretty confident that we were going to be named the National Grand Champion. When we were, it kind of blew me away.

For the Blue Room tree, they went over to a farm that won in 2010 in Pennsylvania. He has big trees.

So my family and I — Leslie, my wife, and the four kids — we left the farm here around 4:30 a.m. on Thanksgiving afternoon after working all day, and we headed to D.C. Our Thanksgiving dinner was in a McDonald’s in Pennsylvania. We got a tour of the White House from the Secret Service, we had coffee and cookies in the Red Room and that’s where we met the First Lady, the daughters and the dogs. It was definitely an incredible occasion.

MF: I have to ask, what kind of tree do you have in the Wyckoff home?

JW: I don’t know, go ask my wife. She is the one that get’s the final say, but typically we’re a Douglas Fir family.