Unique to Australia, this subspecies of the wolf is considered both a pest animal and a national icon, protected on conservation lands and killed in farm country. These polarizing creatures are often seen as a major factor in one of the biggest farming trends Down Under: the evaporation of sheep farms. But is that fair? […] 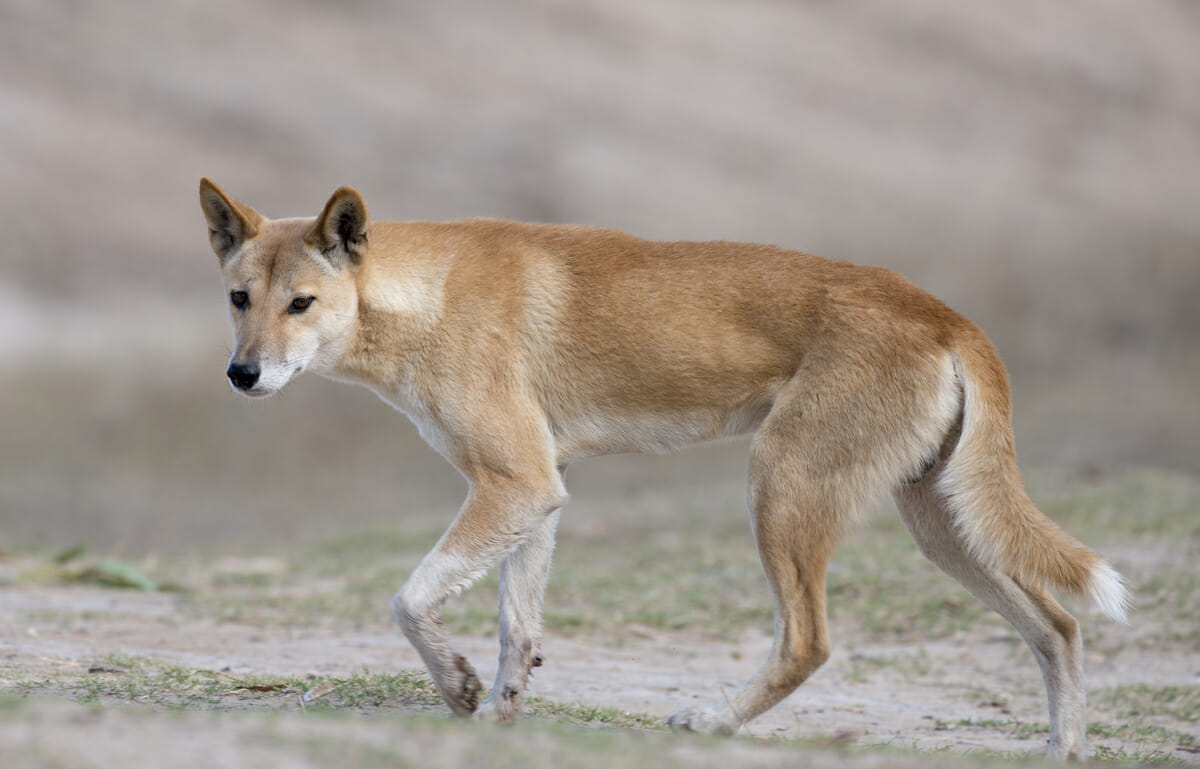 Unique to Australia, this subspecies of the wolf is considered both a pest animal and a national icon, protected on conservation lands and killed in farm country.

These polarizing creatures are often seen as a major factor in one of the biggest farming trends Down Under: the evaporation of sheep farms. But is that fair? Are the wild dogs of Australia devastating that country’s wool industry?

Or are they misunderstood scapegoats, taking the blame for an industry suffering from other issues?

One thing is clear: there has been a decline in both sheep numbers and farms over the last 40 years, and many factors are responsible, according to various government reports.

In 1970, sheep peaked in Australia with a population of 180 million. This dropped to 68 million animals by 2009-2010, the lowest numbers since 1905. But the numbers are on the rise, with the latest figures at 74.7 million head. Although there have been reported decreases in sheep and lamb numbers in Queensland and South Australia, they were offset by increases in New South Wales, Victoria and Western Australia.

The number of farmers of all stripes across Australia has been declining for decades, with small farms selling to larger operations and fewer young people taking over family farms – the average age of farmers is 53. In a five-year period, from 2006 to 2011, there was a loss of nearly 20,000 farmers, an 11 percent decrease.

According to a report by the Australian Bureau of Statistics, the main culprit for the collapse in sheep has been “poor market prospects for wool.” Besides the low profitability, other factors for the decline include on-going drought conditions, competition from other farming industries and labor shortages.

According to Lyn Watson, the director of Dingo Discovery Sanctuary and Research Centre in Toolern Vale, Victoria, reported losses of sheep annually hover around 3,600 in Victoria and 1,200 in New South Wales – two large sheep producing states near Queensland. The predation loss is a tiny fraction of livestock loss for these two states that have a total of 55,000,000 sheep. Many more sheep are lost in live export trips, she contends.

But, still, even if a dip in overall numbers of Australian sheep can largely be attributed to economic and climate forces, the dingoes are not helping. 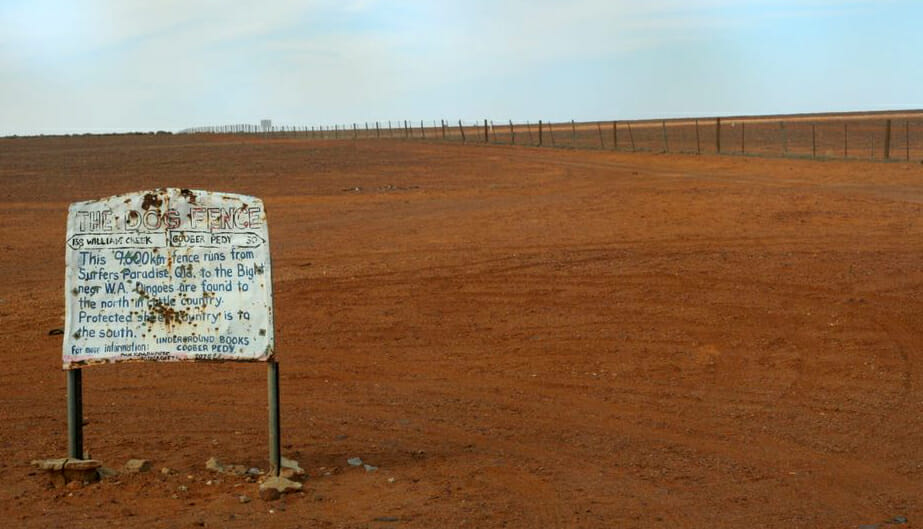 Australia’s massive dingo fence was built to protect the flocks of southern Queensland. Via Flickr/Paleontour

A recent scientific review reported that in Queensland the sheep flock has decreased by 70 percent since the early 1990s, and 40 percent across the rest of the country.

The study, by Ben Allen and Peter West from the Invasive Animals Cooperative Research Centre published in June’s Australian Veterinary Journal, alleged that incursion by dingoes into parts of Queensland, New South Wales, Victoria and South Australia protected by the dingo fence is partly to blame for the decline.

“Dingo predation is by no means the sole cause of the decline in sheep numbers across Australia, but dingoes are a major cause or, at the very least,’the straw that breaks the camel’s back’,” according to the report.

The authors blame a shortage of farm labor, disrepair of fencing and a scattershot approach to wild dog control efforts for the problem.

“History clearly shows that long-term, broadscale control efforts prior to and early in the twentieth century enabled the sheep industry to prosper in the pastoral rangelands through until the peak in sheep numbers in the early 1990s. During those early times, netting fences were extremely common, there was much more labour available and every station-hand controlled wild dogs,” said Allen.

According to Queensland Agriculture Minister John McVeigh, dingoes are public enemy number one. “Wild dogs cost the Queensland grazing industry $60 million a year in lost production and cause untold pain and suffering to farm animals and emotional stress to their owners,” McVeigh said during a speaking engagement in November.

Shepherds tend to agree. Rick Keogh, a Queensland sheep producer, told the Australian Broadcasting Company in May he believed problems with wild dogs were driving others out of the sheep raising business.

Dingoes subsist on a variety of prey, from kangaroos to rats to feral pigs, but will hunt sheep if they encounter them, according to a 2004 University of Nebraska report. Farmers tell of finding their sheep with their livers eaten out, or if found alive, with huge chunks of flesh taken from their haunches, resulting in the animals being put down.

Sheep are particularly vulnerable to dingo attacks. In the face of a wild dogs, they tend to flee or mob. And like the proverbial kid in the candy store, the dogs may rush from animal to animal, inflicting fatal wounds on a number of sheep, whilst only taking one animal for its meal, according to the report.

But for all of the gory mayhem that dingoes wreak, recent studies have pointed to positive roles they can have on the farm. Most notably, an award-winning research team headed up by University of Tasmania Professor Chris Johnson showed dingoes to be “key elements” in the fight to keep down environmental damage caused by foxes, kangaroos and feral cats. “Far from being vermin, Australia’s dingoes sustain biodiversity and can help land managers control invasive species,” according to the research team.

While some say dingoes help keep other problem animals down, Allen and his colleagues disagree. A separate paper, published in July in the journal Frontiers in Zoology, alleged that in areas where wild dogs are eliminated, other predators, such as foxes and feral cats, don’t replace them.

“It just doesn’t happen,” Allen said in a media release.

How To Kill a Dingo

Dingoes, and wild dogs in general, are considered vermin by many state governments and as such, its populations are controlled in sheep, goat and cattle grazing areas. The major weapon used in controlling the wild dog population is sodium fluoroacetate, known as 1080, a poison that dingoes and domesticated dogs are highly susceptible to.

In Queensland, the government is loosening restrictions on the use of 1080 to “give graziers more options to undertake baiting programs,” in the words of McVeigh, the agriculture minister. Another recent study, this one on the effects of baiting with 1080, purports to show that instead of decreasing predation by wild dogs, baiting actually increases the loss of livestock by disrupting their pack structure.

According to a study by Dr. Lee Allen, a zoologist with Biosecurity Queensland, when the pack structure is changed, younger, less experienced dogs will go after livestock rather than its usual prey of kangaroos, rabbits and other small animals because the young dingoes don’t have the hunting experience to handle larger prey. “They’re then left with the problem of how to feed themselves and it’s basically getting a whole bunch of young teenagers together and they get up to all sorts of strife,” he told the Australian Broadcasting Company in a March interview.

Watson said there are better ways to deal with wild dog situation than baiting and at a much lower cost to the “public purse” and the environment, including compensating farmers for losses and using “proven protective measures such as donkeys, llamas, camels, flock guardian dogs and exclusion fencing.”