From backwoods county highways to Milwaukee city streets, Wisconsin road crews will be using a new weapon in the war on winter accidents — cheese brine. Brine is a liquid cheese-making byproduct; if you’ve bought fresh mozzarella, it often comes floating in the stuff. To cheese-makers, it’s a hassle — they spend many thousands of […] 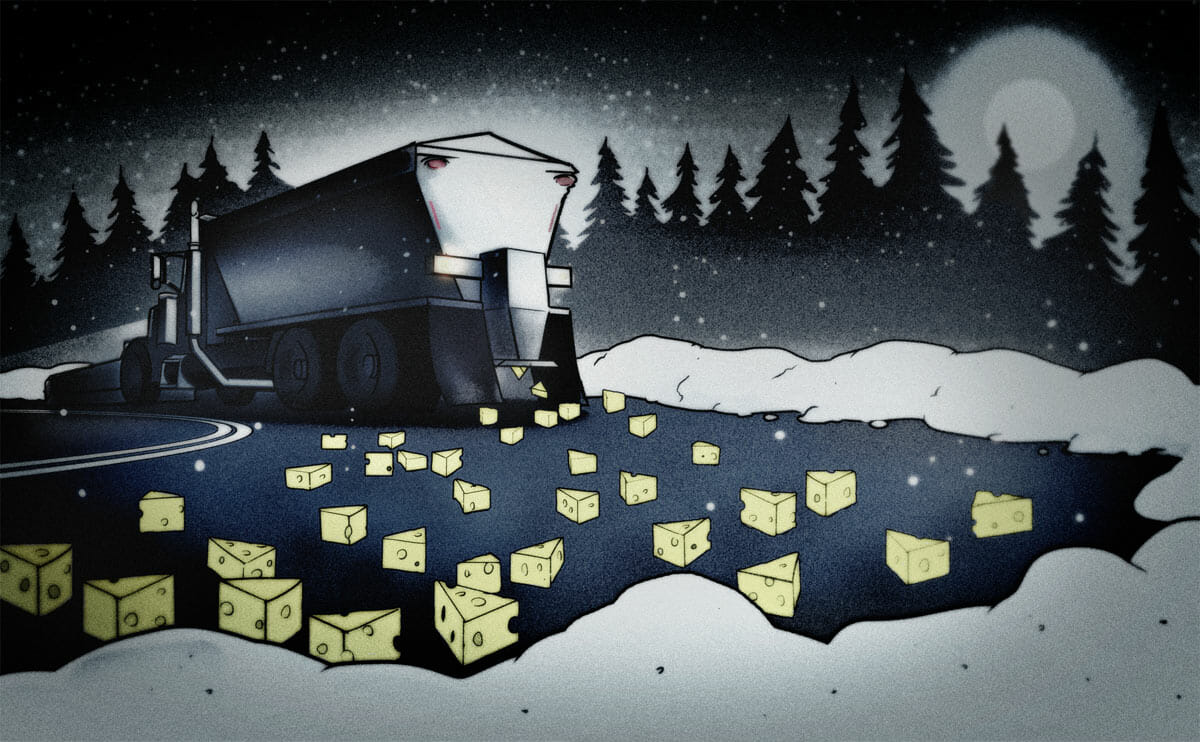 From backwoods county highways to Milwaukee city streets, Wisconsin road crews will be using a new weapon in the war on winter accidents — cheese brine.

Brine is a liquid cheese-making byproduct; if you’ve bought fresh mozzarella, it often comes floating in the stuff. To cheese-makers, it’s a hassle — they spend many thousands of dollars to dispose of cheese brine each year, trucking it to wastewater treatment plants.

But several years back, a rural highway employee named Emil Norby — people call him Moe — had a flash of inspiration. What if this salty brine could be used on icy roads, a companion for rock salt and sand? “I knew we had a lot of dairies looking to get rid of this stuff,” Norby says. “I figured why not give it a whirl.”

‘I don’t really mind the odor. Our roads smell like Wisconsin!’

Of course, there is an odor to consider. “What better to put on your roads than the scent of mozzarella?” quipped John Umhoefer, executive director of the Wisconsin Cheesemaker’s Association. Cute sound bite, but not altogether accurate.

In a recent report, the Milwaukee Department of Public Works noted cheese brine’s “distinctive odor.” Norby says this scent is tough to describe, but likens it to the smell of whey (not exactly a ringing endorsement). Still, he manages some cheesehead pride: “I don’t really mind it. Our roads smell like Wisconsin!”

The odor stems from organic matter, little bits of cheese flotsam left from the brining process. It’s these bits that make brine so effective as a road de-icer. Regular salt brine has a freezing point of 6 below zero, but cheese brine doesn’t freeze up until 21 below.

It also keeps rock salt from bouncing off the road. In a process called pre-wetting, the salt is coated in brine before hitting the highway. Norby says up to 30 percent of dry salt can bounce off the road; after a good brining, that figure is next to zero.

Milwaukee, which is experimenting with cheese brine for the first time this year, has auditioned other pre-wetting agents in the past — with miserable results. Back in 2001, they coated rock salt in a “molasses-like substance,” but people ended up tracking the nasty goo into their homes. And in 2009, they sprayed their rock salt with beet juice. Apparently this created an unmanageable sludge “resembling oatmeal” in the city’s plow trucks.

If Milwaukee’s trial run is successful, it will be the biggest city to adopt cheese brine as a de-icer. Other cities may soon follow suit — Norby and Engdahl have fielded inquiries from all over the country, including one from Kraft.

“I think they want to try it in New York,” Norby says.