The Illustrated Journals of a Dairy Farmer in 1941 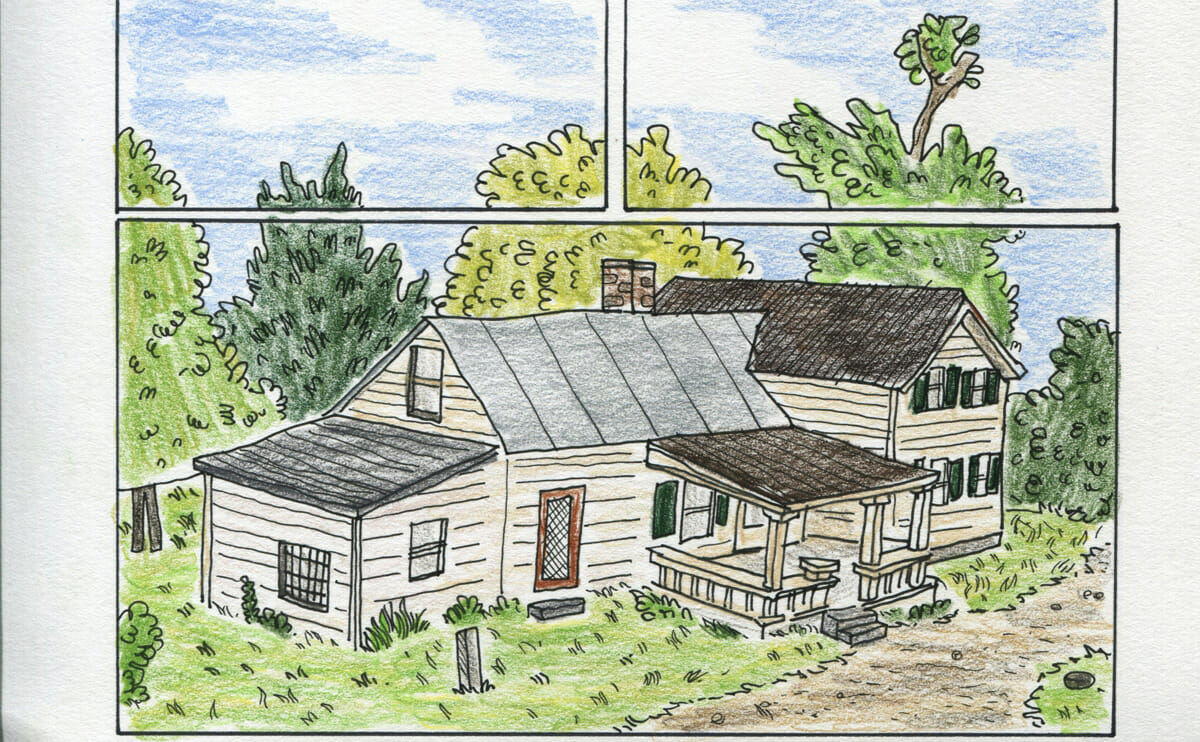 In the early 1940s William George Pope, and his wife Mildred “Moodie” Pope, left Utica, NY and bought a farm. They named it High Acres, and started raising Ayeshire Cattle. Pope had been an engineering teacher up to this point in his life, but his passion for High Acres is made clear in the daily journals he kept. In spare and unsentimental language, Pope describes the weather, goings on at the farm, he and his wife Moodie’s social life, and occasional mentions of the war overseas, in which his two sons were serving. His great-grandson Lucas Adams has been illustrating W.G. Pope’s diary for us here at Modern Farmer. This week, in his final installment, Adams retraces his great-grandfather’s steps at the present-day site of High Acres farm. See the rest of W.G.’s journal entries here.

The farm that was High Acres is owned today by Tom and Debbie Zembrzuski. They have lived there for about ten years. They grow garlic, make jam, and raise bees. I visited the farm with my friend Matt Grubb this summer, and Tom and Debbie let us stay with them and showed us around.

Tom and Debbie took us over to the Russian Union Church where WG gave the address at Old Home Day. They and their neighbors have been raising money and repairing the church, giving it new windows.

The barn on the farm is gone. No one is quite sure where it used to be. It might have been where the swimming pool is now, but in another spot in dry years, parts of a foundation show where the grass dries out.

There is one person left in the area who remembers my great grandparents, a woman named Isabel Farr. Isabel’s parents, Clement and Eulalia Renodin, were tenant farmers who lived down the road from WG and Moddie in the late 30s.

When Isabel was 12, she visited High Acres with her father, and Moodie saw her outside admiring their Ayrshire cattle. She invited Isabel inside for cookies and milk, and returned to visit for years. She told me that WG was “larger than life”, and that he would give her Mom rides into Utica in his car. When Matt was taking a photo of Isabel and her husband Homer, she asked, quite concerned, “Is this going to go viral?”

The Zembrzuskis have added siding to the house, but so much of the house is the same as it was in my great grandparent’s day. Debbie knew her house was the one in my comics because the front door I’d drawn matched the one they still had.

I’ve returned to houses that I grew up in to find them neglected, and in terrible shape.

Debbie and Tom have tended with great care to the farm. I know WG and Moodie would be so pleased with how High Acres is doing.

Popular
7 Smokable Plants You Can Grow That Aren’t MarijuanaBrian Barth
How to (Actually) Get Rid of Fruit FliesEmily Baron Cadloff
What to Do With an Abundance of PeppersShelby Vittek
6 Differences Between Llamas and AlpacasAndrew Amelinckx
Yes, the Government Really Does Stash Billions of Pounds of Cheese in...Emily Baron Cadloff
Explore Modern Farmer
Related
Food & Drink, MTMF
Meet the Former Chefs Growing Restaurant-Driven Produce in Suburban AlbanyKerri Sullivan
Food & Drink
‘Tis the Season For GleaningCrystal Sands
Plants
This Seed Detective Travels the World Tracking Down Lost CropsEmily Baron Cadloff
Books, Cookbooks
In Her New Book, Molly Yeh Goes Back to BasicsEmily Baron Cadloff
wpDiscuz
We use cookies on our website to give you the most relevant experience by remembering your preferences and repeat visits. By clicking “Accept”, you consent to the use of ALL the cookies.
Cookie settings ACCEPT
Privacy & Cookies Policy