Inside the Mind of a Turkey - Modern Farmer
Animals, Food & Drink, Lifestyle

Inside the Mind of a Turkey

Americans wolf down 46 million of turkeys each November; shouldn't we at least try to relate? 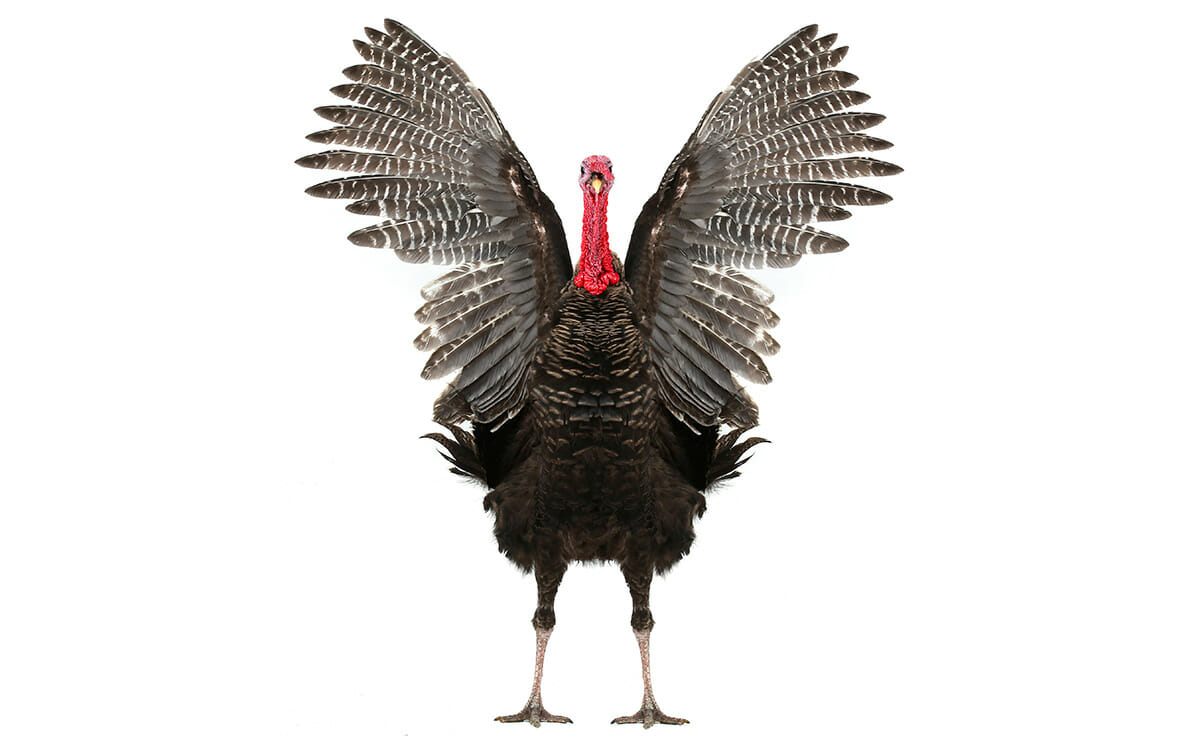 We’d like to pick up where the book left off. After all, Americans wolf down 46 million of these birds each November; shouldn’t we at least try to relate? Using the combined wisdom of an Ohio turkey farmer named Bill Karcher, a poultry researcher named John Anderson and some 4H essays written for children, let us provide you with some armchair insight into tomorrow’s dinner.

It’s well-documented: Domesticated turkeys always want to hang out. Even if they have lots of space to roam, they’ll stick tight; Anderson calls it “flocking up.” Remove a turkey from his friends, he’ll squawk and make a scene. They’re not real choosy — Anderson has seen turkeys latch onto dogs or sheep in a pinch. He even has a turkey at home that trails him like a trained pooch.

In the poultry industry, stories make the rounds about turkeys suffering heart attacks when their brethren head to slaughter. True or not, Karcher says that when a turkey dies in front of his flock, everyone else gets spooked. They all mope for awhile, eating less and avoiding the death site. Luckily they get over it after a few days. “They’re either really resilient, or they’ve got bad short-term memory,” Karcher says.

Right around the age of adolescence, male turkeys start acting like punks. They seek attention in the most desperate ways, shoving each other around and generally being obnoxious. “It’s like teen humans,” says Karcher. “They don’t have the good judgment that comes with maturity.”

Turkey hens are like most mothers in nature — mess with their babies and they’ll totally freak. Karcher says it can be no easy task to collect eggs during laying season. Typically docile hens have no problem rearing up and attacking a human. He says the male turkeys (toms) will also get in on the action. “You take an egg, they’re going to flog the crap out of you with their wings,” he says.

A Need to Be Heard

Do not mock the comical-sounding gobble — it’s a basic form of self-expression. It’s also only one of the noises turkeys make in a fairly complex arsenal of turkey communication. Turkeys possess a vast range of gobbles, clucks and yelps, with meanings ranging from “I’ll take you on, big boy” (Acker’s words) to “I’m lost” or “I’m just waking up for the day.”

You’ve surely heard this one before — in a rainstorm, turkeys will supposedly crane their necks up and drown. This myth has been roundly disproven, yet it endures. Some claim it is the necessary folklore we use to justify mass turkey slaughter (i.e., it’s okay to kill dumb things). Dr. Karl Nestor suggests that turkeys aren’t dumb, but they do like a good rainstorm. It’s like a natural shower — Nestor says they want the rain to wash them clean. He may just be speculating, but turkeys are always preening and tamping down their feathers, a not-quite-OCD display of hygiene.

Popular
The Fertilizer Shortage Will Persist in 2023Shea Swenson
7 Smokable Plants You Can Grow That Aren’t MarijuanaBrian Barth
Agricultural Runoff Pollutes Well Water, a ‘Public Health Crisis In the Making’Madison McVan, Investigate Midwest
Move Over, Mezcal. A Sustainable Tequila Alternative Is Taking Over.Hollie Stephens
Why Don’t We Eat Turkey Eggs?Dan Nosowitz
Explore Modern Farmer
Related
Features, Food Security, Labor
The Rise of Virtual Farmers MarketsLeah Borts-Kuperman
Features, Food & Drink, Fungi
Could New York Become the Mushroom State?Sara Foss
Environment, Labor, Water
California Farms and Farmworkers Attempt to Recover From Record FloodsNaoki Nitta
Books, How-To, Lifestyle
How to Turn Your Garden Into a Business, No Matter the SizeEmily Baron Cadloff
wpDiscuz
We use cookies on our website to give you the most relevant experience by remembering your preferences and repeat visits. By clicking “Accept”, you consent to the use of ALL the cookies.
Cookie settings ACCEPT
Privacy & Cookies Policy